State Sen. Bob Gardner, a Colorado Springs Republican, is being investigated for an ethics violation tied to comments he made in a Senate Judiciary Committee hearing in 2019.

As first reported by KMGH's Meghan Lopez, the ethics complaint, filed by attorney Chris Forsyth, who runs the Judicial Integrity Project, claims that Gardner may have violated Senate rule 41, which addresses undue influence over state officials and conflicts of interest.

Gardner on Friday night told Colorado Politics that the complaint is groundless, and that he was disappointed that the Senate leadership did not dismiss it out of hand or take the time to thoroughly ask what actually happened.

"What I'm really accused of is picking up the phone on behalf of another citizen," the same that every lawmaker does on behalf of constituents every day, Gardner said.

Forsyth's complaint was filed on April 21, but it was just yesterday that Senate President Leroy Garcia appointed an ethics committee to look into the complaint. Under Senate rules, at least two of the three leaders of the Senate must agree for a complaint to move forward. That's Garcia, Majority leader Steve Fenberg of Boulder and Minority Leader Chris Holbert of Douglas County. It isn't known which of the two, or if all three, signed off on the investigation.

On Jan. 25, 2019, the House and Senate judiciary committees participated in a joint hearing that heard a presentation from the State Commission on Judicial Performance, a hearing in which Forsyth participated as a member of the public.

During that hearing, according to the complaint, Gardner said the following:

The complaint said Gardner admitted that he used his position to bring undue influence on another public official, the state court administrator, to get a different judge assigned to his colleague's case.

The 2019 hearing rose to the level of a complaint because Gardner was a Senate co-sponsor of House Bill 1136, which proposed to expand the senior judge program, and "therefore proposes to expand the power of the chief justice and state court administrator" over the senior judge program. "Given Gardner's actions, the bill also proposes to expand Gardner's power to call the state court administrator and inappropriately control what judge hears a case," the complaint said. HB 1136 was signed into law on May 4.

Gardner also is a member of a committee assigned to investigate allegations around workplace harassment within the judicial branch, the complaint continued. That includes looking at the chief justice and the state court administrator. "Gardner's actions in sponsoring HB 21-1136 at the same time he is involved in an investigation of the judicial branch does not promote public confidence in the integrity and independence of the Senate and the General Assembly." The complaint calls it a conflict of interest.

But that doesn't appear to be the only one. The ethics committee investigating Gardner and appointed by Garcia includes his Senate co-sponsor on HB 1136, Sen. Pete Lee, a Colorado Springs Democrat. Garcia also appointed Sen. Faith Winter of Westminster to the committee and Sen. Julie Gonzales of Denver as the committee's chair. Holbert has named Sens. John Cooke of Greeley and Paul Lundeen of Monument as the Senate GOP representatives.

The Senate rules do not spell out the consequences for ethics violations. The last time a complaint was filed was probably in 2011, when an attorney lodged charges against Senate Majority Leader John Morse of Colorado Springs for misuse of taxpayer funds tied to per diem payments. The complaint was dismissed unanimously for lack of probable cause; the attorney who filed the complaint based it on Morse's Google calendar for what he was doing on 211 days during 2009.

The Garcia letter does not say when the ethics committee will convene.

The Judicial Integrity Project is a 501(c)4 that advocates for "improving the justice system by advocating for nonpartisan laws that increase transparency, enhance accountability ​and remove conflicts of interest."

This article has been updated with reaction from Gardner. 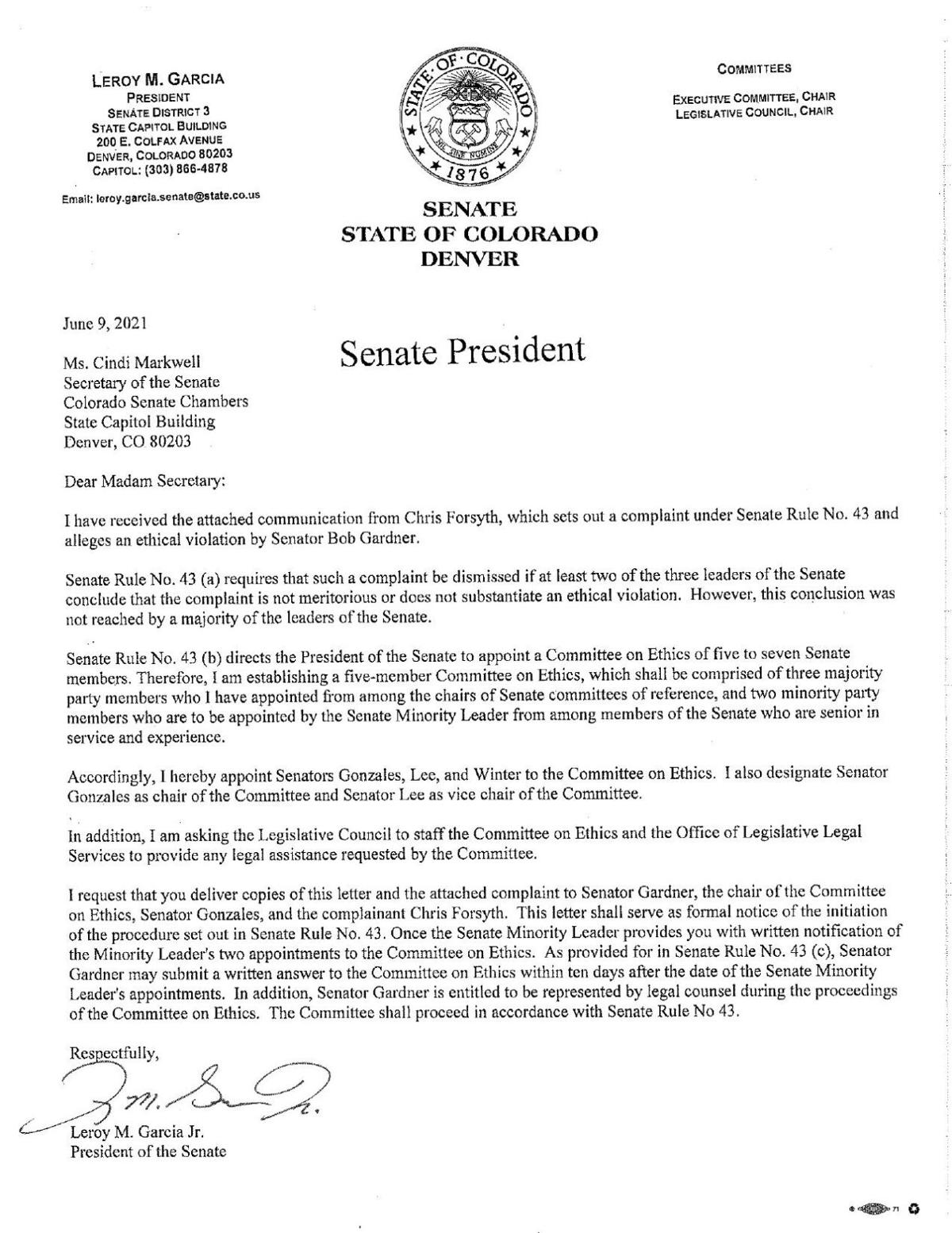 On Friday, the panel will begin looking at an ethics complaint filed against the Colorado Springs Republican, tied to comments the senator made in a Senate Judiciary Committee meeting in 2019.