The Keating-Onsight-Melanson poll of likely voters, made available in advance of its release to Colorado Politics, shows Hickenlooper with 54% support to Gardner's 36% in a hypothetical head-to-head contest, with 9% undecided and 1% picking another candidate.

The Democratic firms' last survey, in October, found Hickenlooper with an 11 percentage point advantage over Gardner, 53% to 42%.

"Coloradans value steady leadership and are turning their backs on Donald Trump’s circus act and those —like Senator Gardner — who they view as enabling it," pollster Chris Keating told Colorado Politics.

Seeking his second term in a state that has turned sharply toward Democratic candidates in recent elections, Gardner appears to be sinking further underwater with Colorado voters as the election approaches.

The Republican incumbent scored the highest unfavorability ratings the firms have measured for Gardner in a little over three years, with 53% of Colorado voters saying they hold an unfavorable opinion of Gardner and 37% viewing him favorably.

In the firms' October survey, Gardner was viewed favorably by 35% and unfavorably by 45%.

Lorena Garcia says she plans to sue for a spot in the Democratic primary in federal court after the Colorado Supreme Court ruled Tuesday that the first-time candidate didn't turn in enough valid signatures on nominating petitions.

The poll also asked voters how they view Trump, whose campaign has said it considers Colorado a battleground state in the presidential contest.

Of those surveyed, 37% said they have a favorable opinion of Trump, while 62% say they view the president unfavorably. The results mark the lowest positive rating and highest negative rating the firms have recorded for Trump in the three years since he took office.

Asked to grade Trump's job performance as president, 56% of respondents gave the president a D or an F, while 31% said he deserves and A or a B.

Gov. Jared Polis took a big jump in net favorability in the last year, the pollsters found, with 66% of voters regarding him favorably and 30% unfavorably. That's up from 50% favorable and 35% unfavorable responses last June. 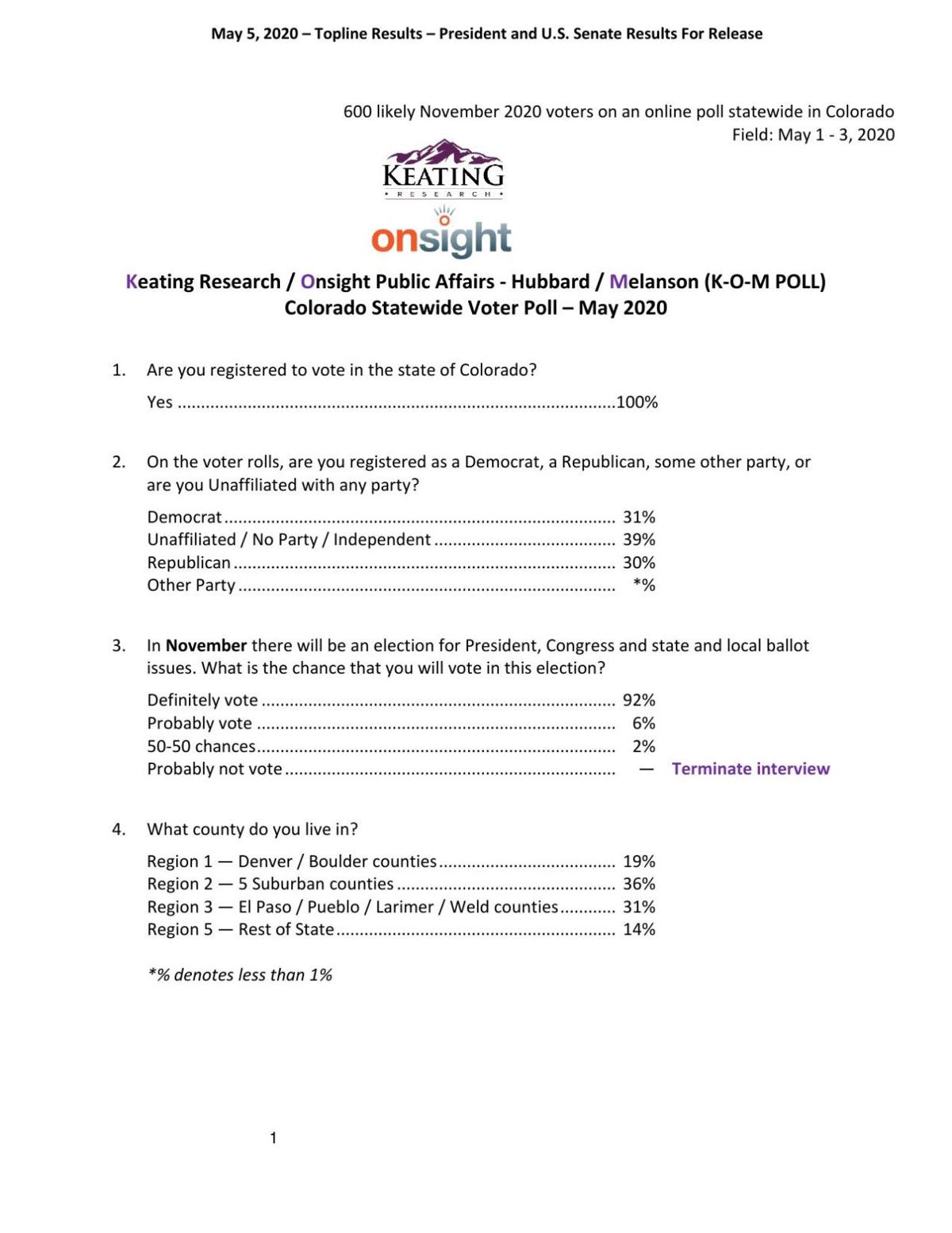 The KOM Colorado Statewide Voter Poll, based on a sample of online surveys of 600 likely Colorado voters, was conducted May 1-3 by Telluride-based Keating Research and Denver-based OnSight Public Affairs and Melanson. The firms all paid for the poll. It has a margin of error of plus or minus 4%.

Just before the 2016 election, a poll conducted by Keating, Onsight and another consulting firm found Clinton leading in Colorado by 5%, accurately calling her winning margin. A poll by the same firms just before the 2018 election suggested Polis was ahead by 8 percentage points in the gubernatorial race, which he went on to win by 10.6%.

The survey yielded results similar to another poll of Colorado voters released earlier this week, conducted by researchers at Montana State University-Bozeman and the University of Denver and compiled by the Human Ecology Learning & Problem Solving Lab at the Montana school.

Inside Elections, a nonpartisan publication from Nathan Gonzales, moved three of this year's 35 Senate contests in the Democrats' direction in its April edition, including the Colorado seat held by Republican U.S. Sen. Cory Gardner.