A Denver District Court judge ruled Tuesday that Democratic U.S. Senate candidate Diana Bray didn't qualify for the June primary ballot, rebuffing her argument that the growing coronavirus pandemic prevented her from collecting enough signatures in the weeks before her petition was due.

Bray sued Colorado Secretary of State Jena Griswold in March, asking the court to determine she "substantially complied" with petition requirements despite only gathering 2,724 valid signatures — about one-fourth of the 10,500 it takes to make the statewide ballot, including 1,500 from each of the state's seven congressional districts.

In a 29-page decision, however, Judge Christopher J. Baumann disagreed, ruling that Bray failed to demonstrate a "significant modicum of support" from the electorate.

Baumann ruled last week that another Democratic candidate, Michelle Ferrigno Warren, who collected 5,383, or about half the number of required signatures, belongs on the primary ballot. Griswold has appealed that decision to the Colorado Supreme Court, arguing it would be unfair to candidates who met the legal requirements to bend the rules that far. 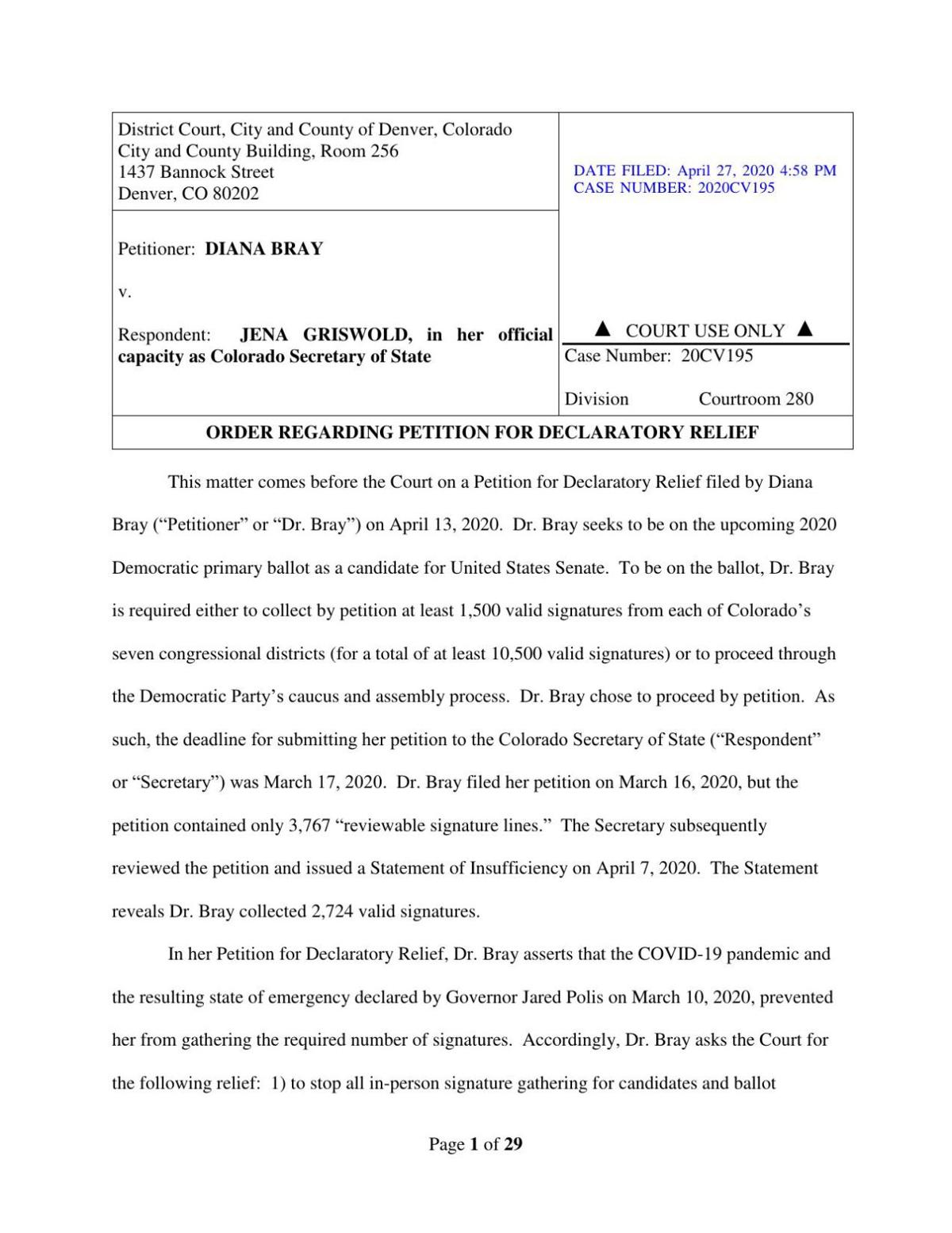 As it stands, Warren is set to appear on the primary ballot with former Gov. John Hickenlooper, who qualified by petition, and former state House Speaker Andrew Romanoff, who was the sole candidate to emerge from the caucus and assembly process.

Another petitioning candidate in the same primary, Lorena Garcia, is asking the court to rule that the 9,428 valid signatures she turned in should earn her a place on the ballot.

The Democrat who wins the June 30 primary will face U.S. Sen. Cory Gardner, considered one of the most vulnerable Republican incumbent senators on the ballot this year.

In a court hearing conducted online April 24, Bray told the judge that her petition drive was thrown into turmoil by the pandemic as the March 17 deadline to submit petitions approached. Circumstances, she said, were “rapidly deteriorating day to day,” and Bray soon concluded she couldn't ask circulators to continue approaching voters.

On March 13, a "heartbroken" Bray announced she was ending her efforts in the interest of protecting public safety.

While noting that Bray came up short in every congressional district — including only collecting 62 signatures in the 3rd Congressional Distric — he sounded a sympathetic note in his ruling.

"By almost any measure, ordinary life for the citizens of this state has been altered by the arrival of COVID-19 to our community. How and when life returns to normal remain uncertain as the Court writes this order. This case shows the political process is not immune from the virus. Candidates, voters, and government officials have encountered a primary election season unlike any other in our history," Baumann wrote.

Bray also asked the court to permit online signature collection, arguing that a face-to-face petition drive during a pandemic is hazardous for circulators and voters, but Baumann declined, saying the court lacks the authority to make such a ruling.

In addition, he wrote, changing the law so close to the primary “would throw the election administration process into a state of chaos that significantly prejudices the Secretary’s ability to conduct fair and orderly primary and general elections for Colorado’s electorate."

Bray said Tuesday after the decision was announced that she would comment later. She declined to say whether she's considering an appeal.

Calling Bray a "passionate, informed, tenacious and thoughtful leader," Warren said in a statement: "Diana has done much to elevate the important, pressing issue of the climate crisis throughout this race, and I not only wish her well despite today’s district court ruling but have every intention to continue to learn from her. During this year she has become both a resource and a friend."

Griswold has until May 7 to certify the primary ballot to county clerks, who are required by law to mail ballots to military and overseas voters by May 16 and can start sending ballots to most state voters on June 9.