Democratic U.S. Senate candidate John Hickenlooper on Saturday released the details of his Equity for All plan to address what he calls the "legacy of inequality that has plagued our country for generations."

"Every individual deserves to live in a country where biases against race do not determine their opportunity to succeed," Hickenlooper said in the seven-page plan's introduction. "Whether in health care, the economy, the legal system, the environment, or our democracy, greater equity is not optional — it is required. We have a moral imperative to do far better than we ever have before, and I am committed to being a fierce advocate in this fight."

The former two-term mayor of Denver and two-term governor of Colorado referenced the plan during his opening remarks in an online candidate forum on racial justice sponsored by a coalition of Colorado People of Color-led organizations. 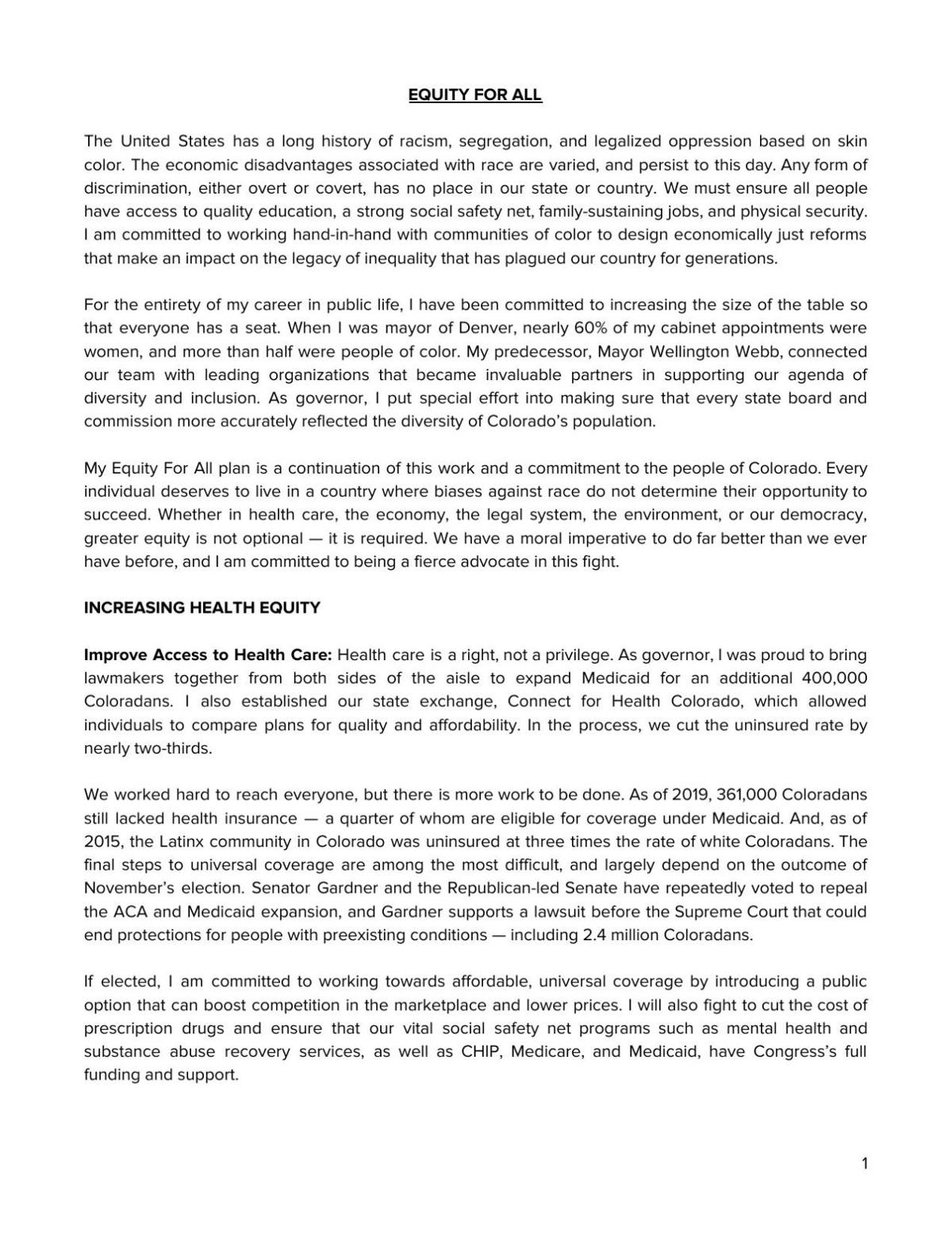 Calling the "economic disadvantages associated with race" varied and persistent, Hickenlooper said he is committed to working with Colorado's communities of color to come up with effective reforms to make sure all Americans have access to "quality education, a strong social safety net, family-sustaining jobs, and physical security."

Pointing to measures he took as mayor to reform the city's police department — including reducing use of lethal force and establishing an independent monitor and civilian oversight commission — Hickenlooper said the reforms should be adopted nationwide.

"What we did wasn’t perfect and there is so much more work to be done, locally and nationally, but we listened to communities of color," Hickenlooper says. "We tried to gain a greater understanding of the challenges they face, and we worked together towards a common goal. All of this needs to be done on a much larger scale today as the use of deadly force against Black and Brown Americans by police continues to be an epidemic in our country."

Among the steps he proposes Congress can take are requiring body cameras on all police officers, "swiftly" disciplining officers who use excessive force, making police data more transparent and funding programs to "heal the trauma of communities living in fear."

"As senator," Hickenlooper says, "I am committed to working with communities of color to address the fear and mistrust of law enforcement, to fiercely advocate for proper police training, and to increase accountability and oversight. People have a right to be safe, unafraid, and secure in their communities. And people have a right to not be victimized in their day-to-day lives or when they peacefully protest injustice."

Elements of the plan's health care section include introducing a public health insurance option intended to increase competition and lower prices, as well as provide "full funding and support" to safety net programs such as mental health and substance abuse services, the Children's Health Insurance Program, Medicare and Medicaid.

In addition, Hickenlooper proposes addressing what he describes as systemic racism.

"Health care outcomes diverge dramatically based on race. This reality is rooted in structural biases, systemic racism, and decades of underinvestment in communities of color. It is not enough to simply expand the scope of coverage, we must change the nature of how care is provided to ensure more equal treatment for all," he says.

That includes reaching the roots of diseases that affect communities differently, like diabetes, heart disease and infant mortality; funding programs that support nutritious food, public transportation and safe public areas for physical activity; and passing the Health Equity and Accountability Act, which has been introduced in Congress without passing for more than a dozen years.

DAYS OF UNREST | Denver marches on from the flames of Minneapolis

Protesters paused on a march through the capital city's downtown Friday long enough to chant, "Shame on you!" at the City and County Building, as the second day of unrest unfolded in Colorado, after the death of the Minnesota man sparked violent protests across the country.