Here is a PDF to the Blue Book's summary on Proposition 118. Read the entire Blue Book here. 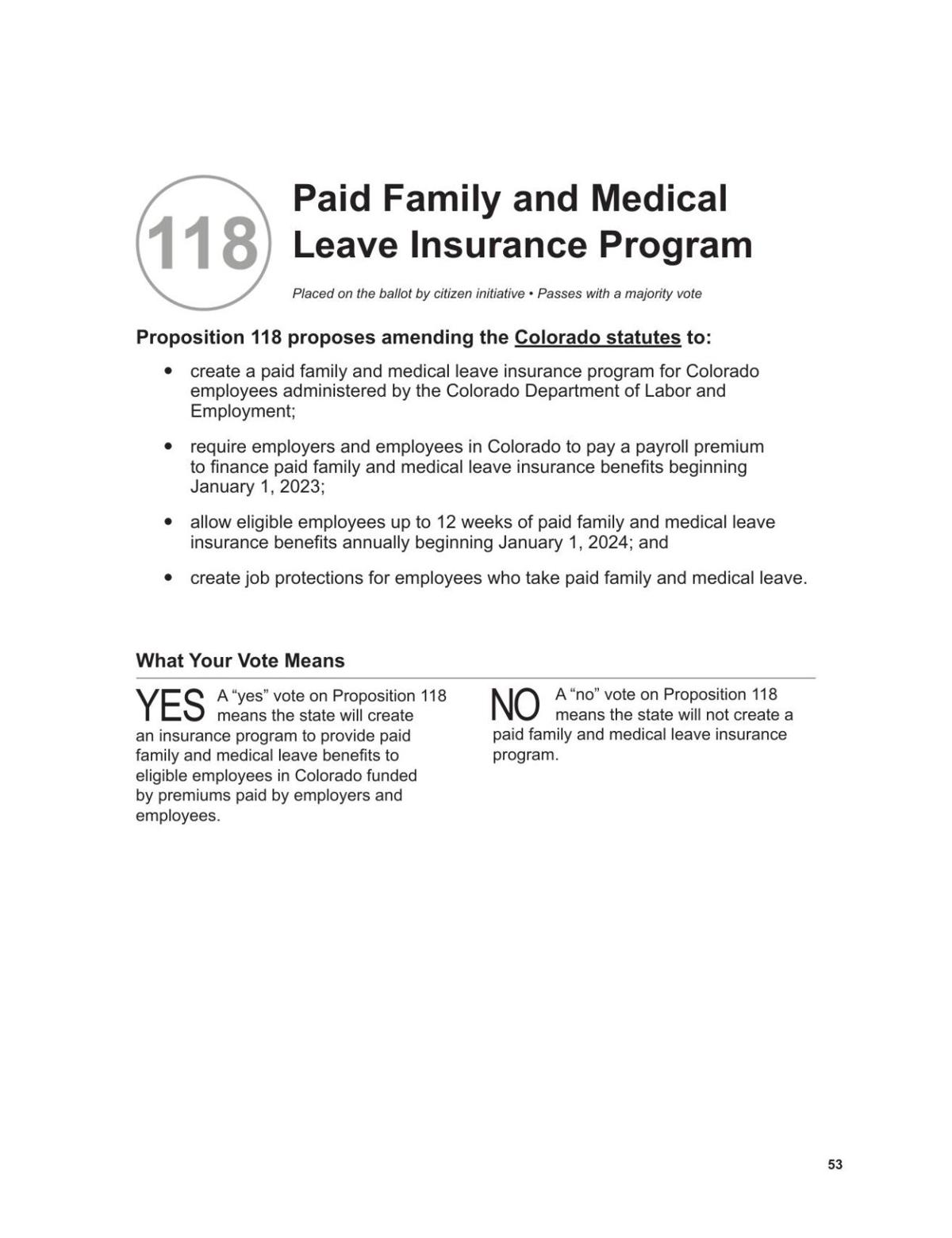 When some causes seem tapped out at the statehouse, they head to the ballot. Such is the case with Proposition 118, the proposed paid family and medical leave insurance program.

Democrats at the Capitol have tried and failed six times to pass a program they've dangled in front of progressive constituents and low-wage earners for years. Until the past two years, the had Republicans controlling the Senate to blame their failure on.

For the last two years, however, Democrats couldn't agree among themselves after they took control of the House, Senate and governor's office in the 2018 election. Polis has been one of its chief skeptics, insisting that any state program pay its own way without being subsidized by taxpayers.

High enrollment  could quickly drive the fund into insolvency, however.

Proposition 118 would allow an employee to take up to 12 weeks off for an illness, to care for a loved one or to bond with a child up to $1,100 a week, for a premium starting at 0.9% of the wages in premiums. The employer would pick up half the cost.

The program would especially be a benefit for low-wage workers who are most likely not able to get any sick time off without losing wages.

Proponents, led by women's advocacy groups and anti-poverty organizations, helps families and makes a positive difference in child development, while protecting jobs and allowing workers to care for their families without jeopardizing the financial well-being or job security.

Opponents, mainly business groups, say it puts a new financial and regulatory burden on small businesses, because mounting costs drive hiring decisions. The insurance program also takes money out of the pocket of people who will never use significant medical or family leave.

Chris Brown, the policy and research director at the Common Sense Institute, looked at existing data to make some projections, estimating the employees' share of the premiums would be between $740 million to $1.7 million in a year and employers would cover $580 million to $1.4 billion.

Under the lowest cost scenario, Brown said the program would be in trouble if it had a claims rate above 6.2%  for employees who took off an average of 9½ weeks, "then the contributions are not significant enough to cover the benefit."

A state employee benefit insurance program won't be cheap, either.

Legislative analysts estimated that if the measure passes, the state would have to spend $3.2 million next year to launch the program Then the cost would jump to $48.6 million the following year to staff, implement and administer the program and pay the state's share to cover its eligible employees.

The Denver Metro Chamber of Commerce and The Colorado Chamber of Commerce are the leading opponents to ballot question. The state chamber has opposed most but worked on some solutions at the state Capitol, including serving in the Family and Medical Leave Insurance Task Force created as a compromise after the 2019 session.

“It’s disappointing that interest groups have chosen to pursue a billion-dollar program in the middle of an economic crisis,” Loren Furman, the state chamber's senior vice president of state and federal relations, said. “The business community came to the negotiating table in good faith to find a thoughtful legislative solution, willing to compromise in order to strike the right balance for a family and medical leave program that works for Colorado.”

Colorado's long-massaged, hard-to-adopt paid family and medical leave program on the November ballot probably won't be on the books long before it would need to raise premiums to cover payouts, according to an independent analysis presented Wednesday morning.

Proponents call it an "essential benefit," but skeptics worry that it will inflict troublesome costs on small businesses and eventually wind up costing all taxpayers.

For the procrastinators: Still filling out your ballot? Colorado Politics' Voter Guide content is all online to help you out

The campaign season like no other is ready for the voter's decisions, and Colorado Politics is making sure our readers are informed with the facts to choose wisely in confusing times.