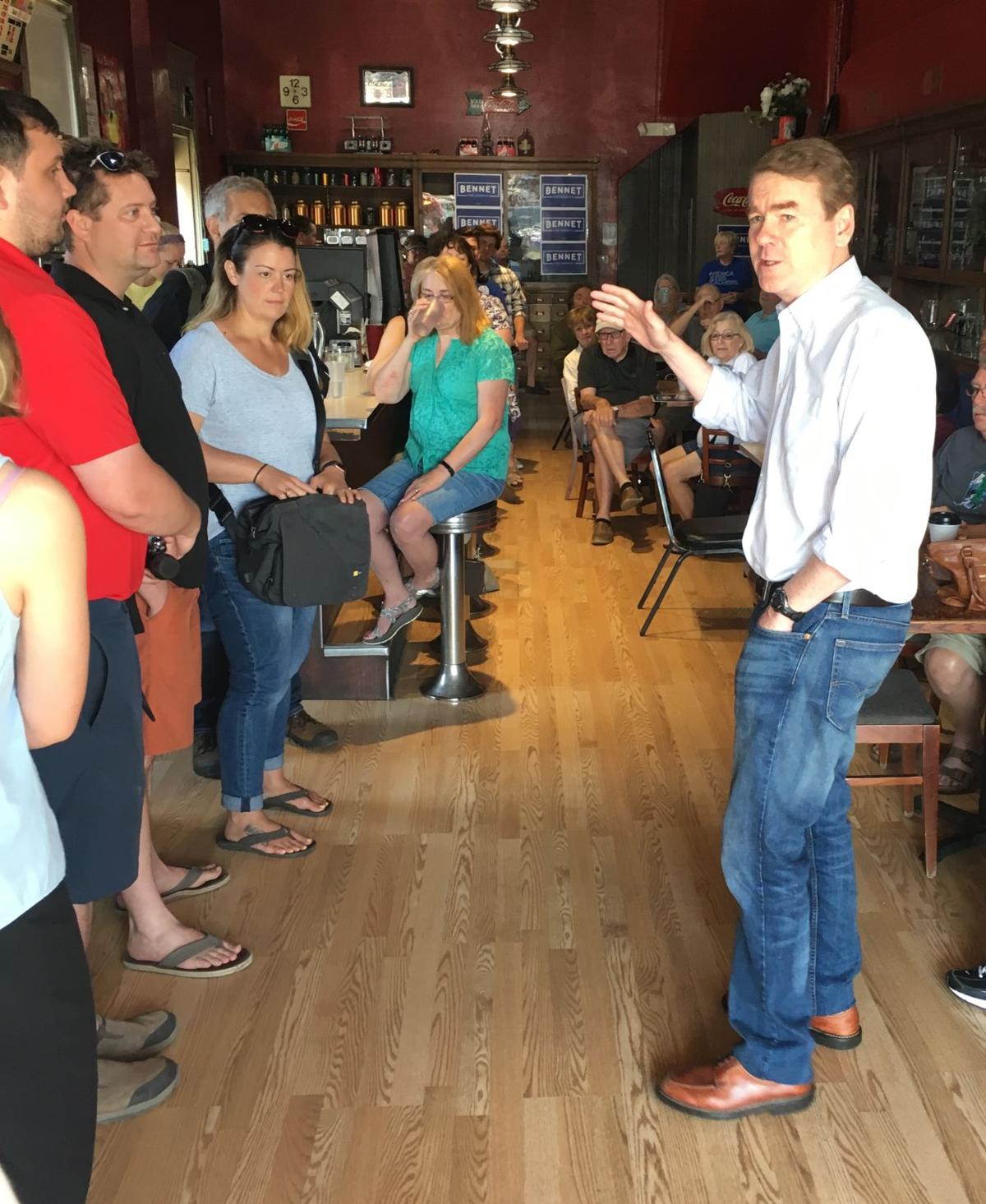 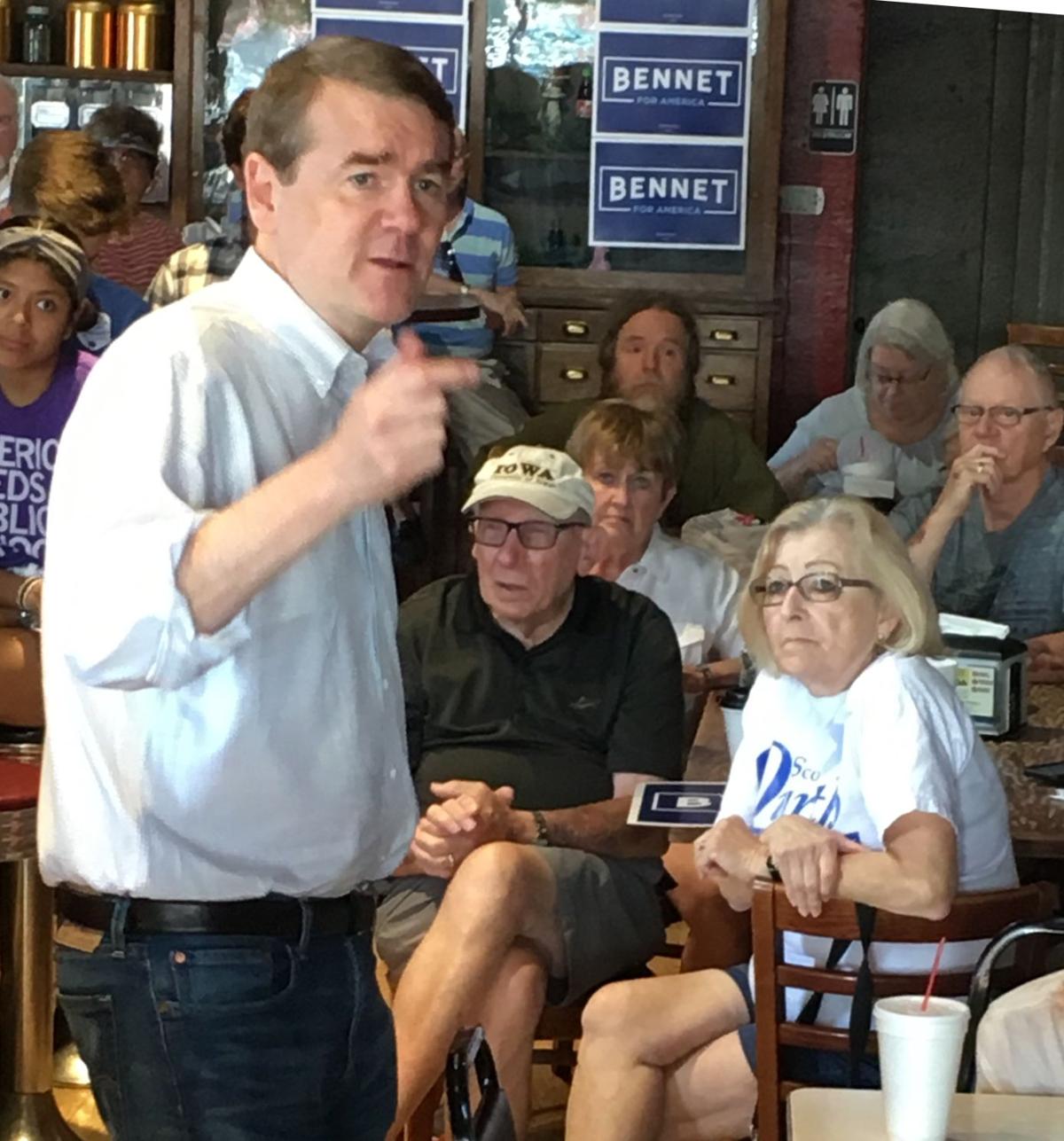 INDIANOLA, Iowa • It’s summer in Iowa before an election year, and that means the countryside is lousy with corn and candidates. I was there last weekend, and, incurable political junkie that I am, I thought I’d try to catch a bit of history and see one of Colorado’s two presidential hopefuls in action on the hustings.

I caught up to Sen. Michael Bennet on the streets of Indianola right before a parade one morning. Norman Rockwell couldn’t have painted a more all-American scene: the smiling, Levis-clad candidate glad-handing his way through a crowd of flag-waving farmers and shopkeepers and ruddy-faced Middle Americans deep in the heart of the heartland.

But Bennet pointed out a gap in the scene that I had completely missed. Right in the middle of the town, the parade wended its way around a big hole in the ground where the town’s beautiful old courthouse used to be. “See that?” Bennet said to me. “Deferred maintenance, and they had to tear the whole courthouse down.”

Here then is the perfect metaphor for why Michael Bennet is running for president and what role he fills in the race. If you don’t take care of the basics, do the daily maintenance, if you forget your everyday priorities, you end up tearing down the whole edifice by mistake.

Our democracy, Michael Bennet believes, is pretty much the same way. We’re tearing apart our precious democratic system with partisan warfare and misplaced priorities and a focus on artificial issues in Washington. And we’re not paying enough attention to the maintenance of our basic rights and values and common purpose. Fixing broken politics has become the centerpiece of his campaign.

“You get these people from the East Coast and the West Coast,” Bennet told me in an alleyway outside the Corner Sundry ice cream shop, “they are so used to a never-ending, raging political battle they forget that is really not what the Founders wanted us to do, which is use our differences to create more durable and imaginative solutions than any king or tyrant could come up with on their own.”

What’s his answer? You might call it the Rocky Mountain Way.

“Every single day in Colorado, that’s what we’re doing. We’re taking those differences and making them into a better idea. I think that’s what we have to do as a country, and that’s also one of the reasons I’m running.”

I reminded Bennet that, alas, the country has never elected a president from the Rocky Mountain West.

“There’s an enormous bicoastal bias in how campaigns are covered,” observes former Ohio Gov. and Colorado College President Dick Celeste, which makes it harder for candidates such as Bennet and former Colorado Gov. John Hickenlooper and Pete Buttigieg, mayor of South Bend, Ind., and Gov. Steve Bullock of Montana to be taken seriously. “If you aren’t from a major media market, it’s a bigger step up than for folks on the coasts.”

But Bennet thinks his middle-Americaness is exactly what a polarized country — and a Democratic Party split by ideology — needs.

“I think the country needs somebody from the middle of the country,” he said. “This is a good time for that. As you know, our state is a third Republican, a third Democrat and a third independent. You cannot represent that state if you are a hardcore partisan … or keep your job for very long. The issues that the Rocky Mountain West is contending with are ones that are more oriented toward the future than the past, resource questions and those kinds of issues, which gives us a natural orientation and direction that the American people need.”

When asked about his contention in his book, “The Land of Flickering Lights,” that Washington is out of touch with the rest of the county because it is being run by cable stations and social media rather than actual human beings, he grew animated, hopping a little from foot to foot:

“We gotta fix it. The way I look at it, there are about 12 or 13 million people whose equities are being served in Washington right now. By that world of cable news and social media. There are 320 or 330 million other Americans out there who are trying to raise their families, who are trying to make their small business work better, do something useful for their community. We are completely unfocused on those people.”

Just like he did with all the questioners in the Sundry shop, Bennet took pains to answer my question thoroughly and specifically, speaking in complete, enthusiastic paragraphs rather than rehearsed, prepackaged sound bites.

“I think in a way, people in Washington sort of lost what the desires are, and all perspective about what’s actually happening in the rest of the country. And I believe that was true before Donald Trump was elected. ... But the point really is it’d be nice to get back to a place where the priorities in D.C. reflect the priorities in Iowa and Colorado and New Hampshire, and actually that’s another reason I’m running and I’m glad I am.”

Though Bennet has had a hard time breaking through in the 10-person televised debate-fests, true to his theme that the actual, human race is more important than the Twitter or cable one, he connected well with the crowd in Iowa.

Retiree Jim Mikulanec told me he’d seen 14 candidates (yes, Iowans take their role as the first-in-the-nation caucus and vetter of presidential candidates very seriously). “It’s a pretty savvy bunch,” Jim said, “but Bennet’s the sharpest. I came to that conclusion today — he could break through.”

I embarrassed the Yale grad by asking him if he was, indeed, the smartest one in the race, a refrain I’ve heard elsewhere as well.

“That is embarrassing,” he replied with an aw-shucks Andy Griffith smile. “But listen, if I lose the race it’s not going to be because people think I’m a dummy. What I’m trying to do is figure out a way where it’s not just more Trump stuff. We need a president with more seriousness, more purpose than that.”

Iowans in Indianola were definitely taking Michael Bennet seriously. As are the cognoscenti around the country, which seem to be taking him more seriously than former Gov. John Hickenlooper at the moment. The Washington Post editorial board did a long Q&A with him last week, and he’s appeared for recent in-depth interviews on ABC and CNN and The View. Conservative columnist George Will called him the Democrats’ best chance to beat Trump. And Atlantic magazine labeled him “The Democrat who wants to stop the rage.”

So is there a path forward for the mild-mannered Colorado candidate?

Celeste thinks face-to-face campaigning will be the key to whether Bennet rises or falls in the days to come.

“Everybody who takes the time and has the opportunity to be exposed to Michael says this guy is the real deal,” said Celeste, who hired Bennet out of college to be his assistant when Celeste was governor.

“One of the qualities he conveys is a deep authenticity. He’s not just pumping practice lines back to them, he’s answering their questions thoughtfully and authentically.”

“He’s a workhorse, not a showhorse,” Celeste added.

“My hope,” Bennet concluded, “is this process in the end will yield somebody who isn’t another version of Donald Trump but in many ways is the opposite of Donald Trump. If that is what people are looking for, I think I have a chance.”

The presidential candidate from California raised the roof in Denver with a promise to "fight for the soul of our country."

The move comes amid signs that Colorado voters are being polled about a possible Hickenlooper run for Senate.

On the eve of the next round of debates in Detroit, The Washington Post is out with its latest top 15 power ranking of Democratic presidential candidates.

President Trump will win a second term if Democrats choose a "professional politician" to run against him, the filmmaker and liberal rabble rouser says — and he includes in that category a certain former Colorado governor.

Former Gov. John Hickenlooper has said repeatedly that he has no intention of abandoning his struggling White House bid to challenge Republican U.S. Sen. Cory Gardner — but a new poll shows he would be the clear front-runner for the Democratic nomination.

George Will touts Bennet to beat Trump in 2020

The best Democrat to beat President Donald Trump next year is a Coloradan well back in the pack, says George F. Will — and not the Coloradan that Will once championed.

Bennet on 2020 presidential race: Still in it to win it

"If history is any guide, the leaders today are not going to be the people we nominate," Bennet said.

No ticket to next presidential debate yet for Hickenlooper or Bennet

Hickenlooper said he would "be a fool" to continue running for president if his standing in the polls doesn't improve.

No post-debate pop so far for Bennet, Hickenlooper

The latest round of Democratic debates didn't do much to boost the standing of Colorado's  presidential candidates with voters, according to post-debate polls.

Fried Oreos here: Iowa State Fair a must for Hickenlooper, Bennet, other 2020 hopefuls

More than 20 Democratic presidential candidates — including Colorado's John Hickenlooper and Michael Bennet — will be weighing nutritionally questionable food choices and navigating media flocks resembling crows on a French fry — all while trying to seem both presidential and comfortable with the folkways of Middle America.

Hickenlooper said the country is "embarrassed and ashamed" by Trump's "incoherent behavior on the world stage" — but he will still be very difficult to beat in 2020.

A Democratic group that supports electing scientists to public office has launched a campaign to encourage former Gov. John Hickenlooper to drop his 2020 White House bid and run for Colorado's U.S. Senate seat.

Colorado's presidential candidates made sure to enjoy all Iowa has to offer while they campaigned there in recent days.

"It’s an old-fashioned word, of course, which means you just don’t see that many true gentle men any more. John Ensslin — who for five months covered Denver for us — was one of the last."