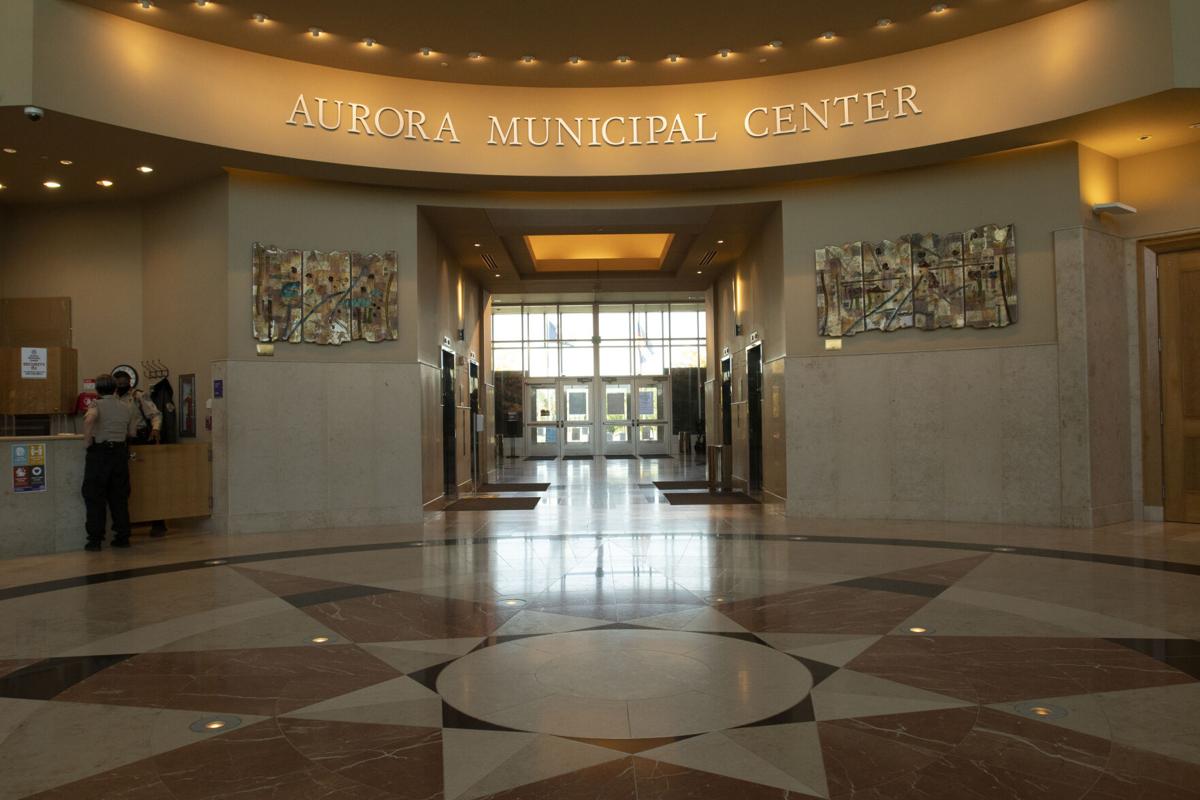 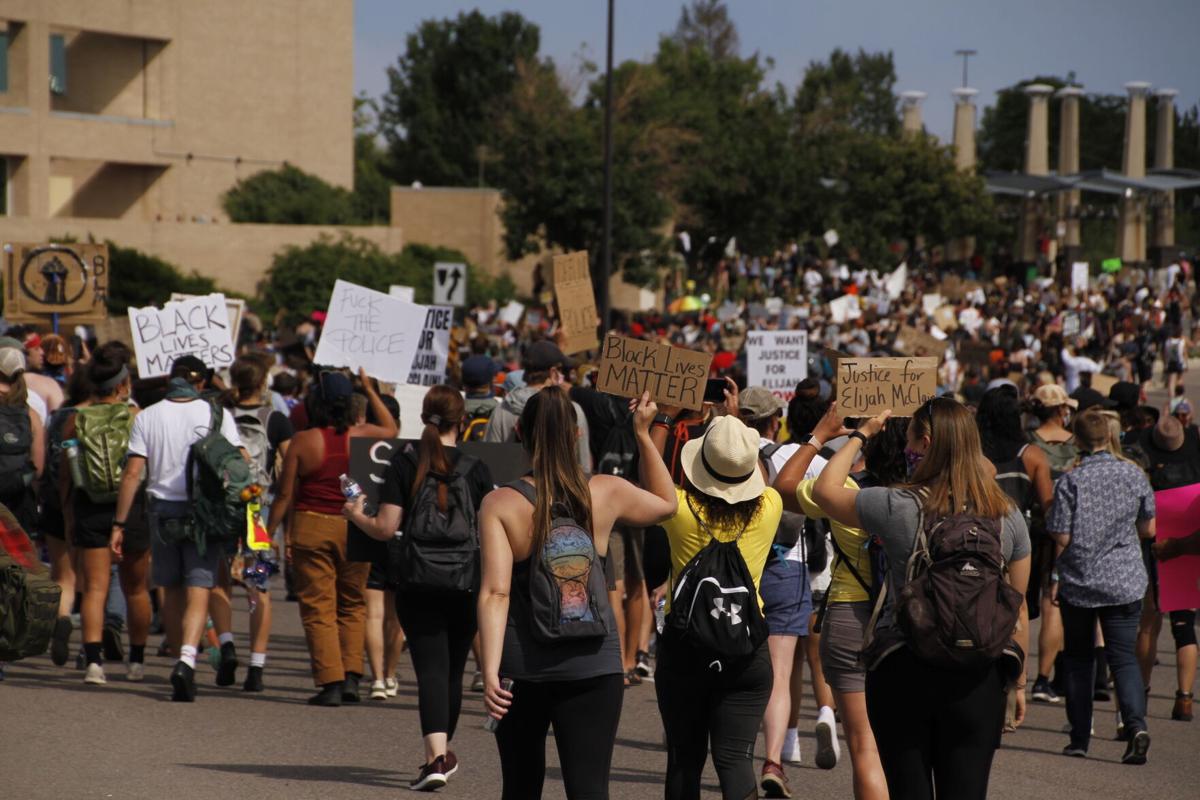 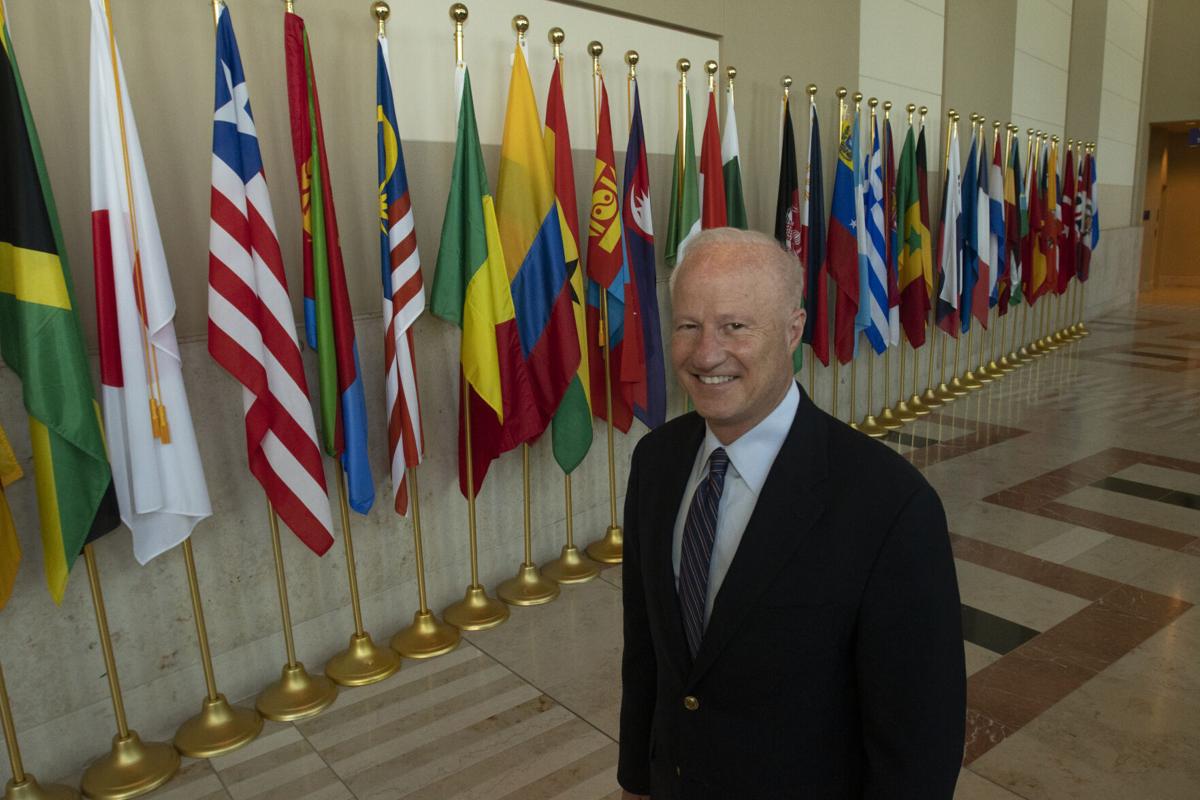 Mayor Mike Coffman stands in front of flags in the Aurora city hall on Wednesday, Oct. 14, 2020. 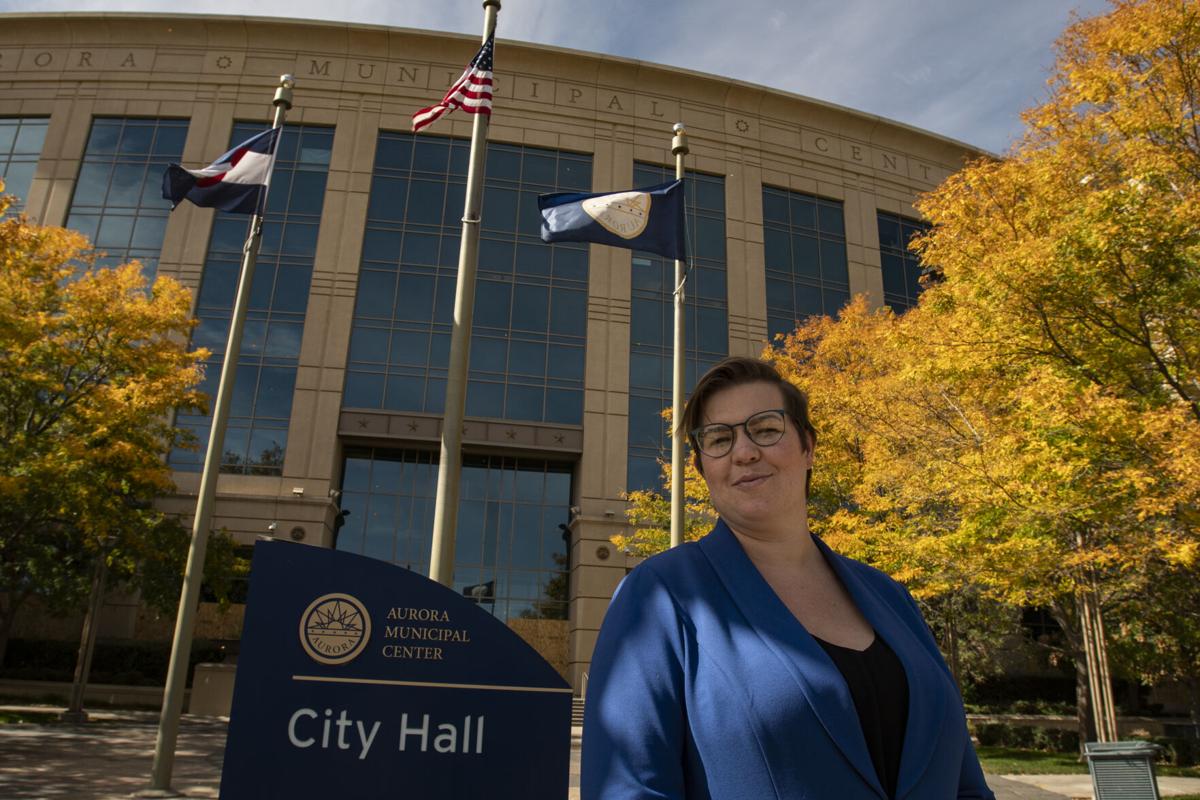 Aurora City councilmember Allison Coombs in front of city hall, which still has windows boarded up to protect from destruction the past summer. 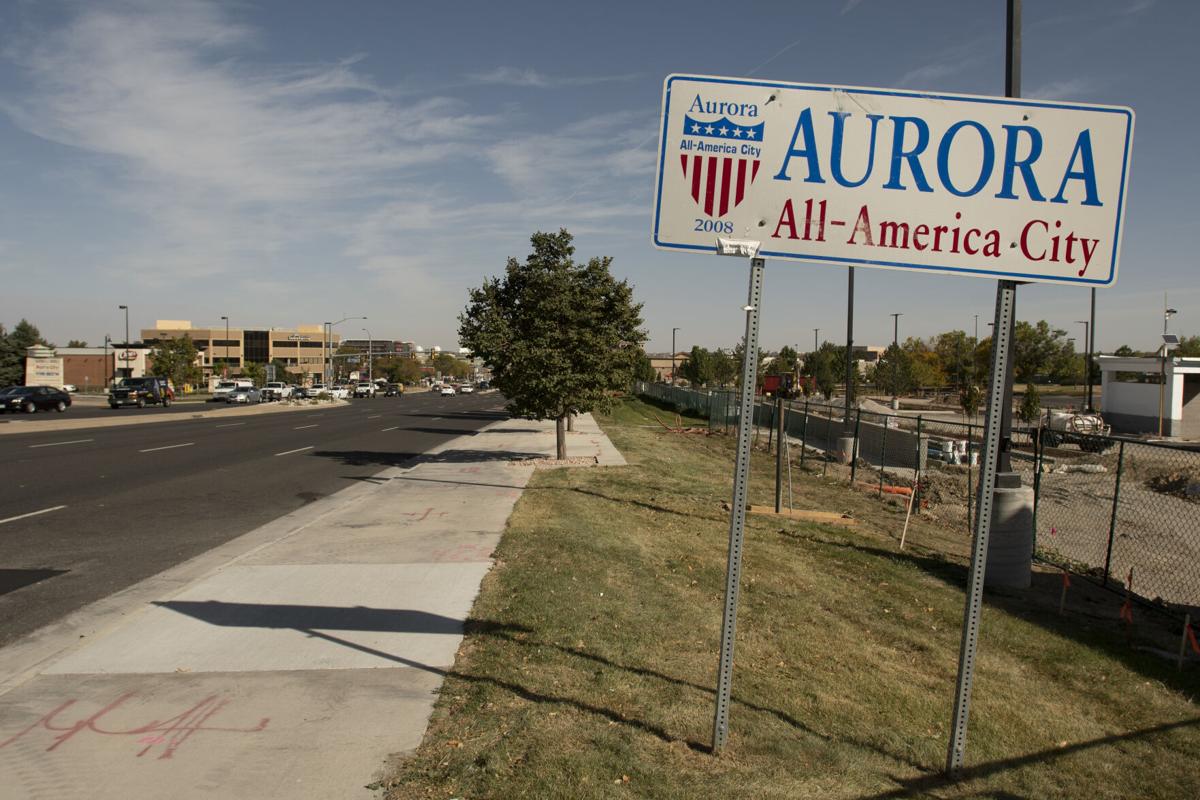 The sign greeting drivers on Colfax Avenue, a main artery through the city of Aurora.

In less than five years, Aurora transformed from a reliably Republican city to a decidedly progressive Democrat-controlled one.

“In 2016 we held all the major political offices in Arapahoe County,” said Dorothy Gotlieb, chairwoman of the Arapahoe County Republican Party. “In 2018, we lost them all.”

In 2017, every Aurora City Council seat was held by a conservative. That’s before the election that year brought in progressives Nicole Johnston, Allison Hiltz and Crystal Murillo.

The change comes at, or perhaps because of, one the most heightened periods of civil unrest in Aurora.

Calls for police reform are loud here in light of the 2019 death of Elijah McClain at the hands of Aurora police, with no charges being brought against any involved.

With Aurora’s large immigrant population – some estimates show 20% of Aurora residents were born on foreign soil – the Trump administration’s efforts to get rid of DACA and deport the so-called “Dreamer” children of illegal immigrants has been a flashpoint here.

Political observers and city elected officials worry aloud what the political change will mean to the economic recovery Aurora is struggling through.

“Unfortunately, there is a lot of dysfunction on the council now and a lot of interpersonal attacks happening,” said Alison Coombs, Councilperson for Ward V elected in 2019 with another progressive Democrat, Juan Marcano from Ward IV.

“My role has changed to ‘stopping dumb things from happening, ’ ” said At-Large Councilman David Gruber, a retired U.S. Air Force Colonel and former base commander at Buckley Air Force Base.

How Aurora went from red to blue

“You can’t talk about Aurora without talking about its diversity, in terms of changing political demographics, race and religion,” said John Brackney, a former two-term Arapahoe County Commissioner (as a Republican) and former CEO of the South Metro Denver Chamber of Commerce for 10 years. He has switched his party affiliation to independent, and works as a political consultant.

Colorado’s third-largest city, with a growing population of about 380,000, Aurora’s political power structure now more closely reflects its population, he and others say.

Republicans are actually in third place among registered voters in Arapahoe County, behind Democrats and independents, said longtime Colorado political pollster and analyst Floyd Ciruli, Director of the Crossley Center for Public Opinion and Research at the University of Denver.

At the behest of the Arapahoe County commissioners, Ciruli conducted a study in 2017-18 to get a better handle on the changing nature of the county’s demographics.

But the study showed a “huge influx” of younger people – many of whom were minorities. The study showed 28% of the county’s population to be Hispanic, and the African American population almost doubled to 17% since the 2010 Census.

Those changing demographics had a large impact on that pivotal 2018 election “sweep” in Arapahoe County.

“I think the (Republican) party was shell shocked at the growth and changing ethnicity,” Ciruli said.

But Coffman – the former five-term congressman who that year lost his 6th Congressional District seat to Democrat Jason Crow – said there’s another explanation for the 2018 election results.

“When one party controls all the levers of power, there is always a big pushback in that first midterm election,” Coffman said. “If the Democrats do take the White House, Senate and House, there will be pushback the other way” in 2022.

Coffman said he’s trying to keep the council’s focus on “policies that will benefit everyone, create jobs and help redevelopment of some older parts of the community.”

But remember that Aurora has a “weak Mayor” form of city government, where the city manager appointed by the City Council handles most of the day-to-day operations, while the Mayor can only vote to break ties.

“I’m concerned that the city is going too far in terms of police reforms that will hamper the police’s ability to reduce the crime rate,” Coffman said.

He also pointed to the recently narrowly defeated proposal by Coombs to raise the minimum wage in Aurora to $20/hour as awful timing when small businesses are struggling to recover from an economy devastated by the pandemic.

"I don’t think that the political disposition of council is reflective of the city at this time," he said. "The city is much more centrist. It could be left center ... They seem to have better organization and more energy on the left – particularly the far left."

Coombs said this issue was one of the main platforms in her campaign.

“As I said many times, essential workers would benefit from this policy,” Coombs said. “I stand with and for them in more than words alone. I’m disappointed the council chose not to do this.”

Coombs said it hasn’t been easy to unseat the prior political establishment, and that it often comes with personal attacks.

Executive Director Micha Rosenoer said they look for women who are active in the community, and leaders in their neighborhoods.

“These are real women with real stories to run for office, dispelling the notion that a woman has to be a lawyer, or doctor, or PhD, to run for public office,” Rosenoer said, adding Emerge does not endorse candidates nor fund their campaigns.

“She comes from one of the youngest and most racially diverse areas of Aurora,” Rosenoer said. “A young Latina woman connects better with voters than older, and quite frankly whiter, candidates. Naming race shouldn’t be bad. If we can’t talk about it, we can’t fix it.”

Conservative groups have targeted Emerge candidates as using “dark money” and alleged it is a “radical left organization,” she said pointing to mailers sent to voters in Coombs’ 2019 campaign.

“It’s embarrassing to see how much money is spent to insult us,” Rosenoer said, adding even some Democratic men “don’t love the idea of a new generation of women leaders moving into ‘their’ space.”

“Radical” is how Councilman Gruber describes some of the measures being brought before the council by its new majority.

“We have gone from the responsibility of the (Aurora) charter to activism … socialist members have brought forward activists’ positions,” Gruber said.

As examples, Gruber pointed to the $20/hour minimum wage hike and a proposed change in city zoning that would have allowed six unrelated individuals to reside in a single-family home. Both were defeated, but not before what Gruber described as “heated and ugly” debates.

“It seems people with (progressive) philosophy tend to get emotional, and defensive when disputed, then turn around and attack you personally,” she said. “How can you run a good government that way? How can you form policy if someone attacks you personally, and shifts the focus from the policy-making progress?”

Coombs denies any personal attacks on council members but admits the meetings have been tense and confrontational.

“We need to look at each other not as labels, and not as adversaries, but to be able to see each other as people. We’ve not been able to do that,” Coombs said.

The lack of in-person council meetings and study sessions has not helped, Coombs said.

While there are often opportunities for “small talk” and relationship-building personal conversations during non-pandemic times – those opportunities disappear when all meetings occur via video conferencing.

Mayor Coffman’s efforts as peacemaker and consensus-builder have been noticed.

“I think he’s doing his best to reflect the constituency of the city,” Brackney said.

Coffman said he speaks Spanish, works hard to understand the nuanced issues from each of the city’s minority communities and is trying to dispel the notion that Republicans are anti-immigration.

“I want to show the country that a Republican can govern in a very diverse city, with large immigrant communities, by reaching out to them and helping them achieve the American dream.”

Reps. Neguse, Crow to perform a story online in the words of an undocumented immigrant

The Democratic freshmen are teaming up to tell the real stories of undocumented immigrants as part of a free online series for the Motus Theater, a Boulder-based nonprofit that creates dialogue around issues through creative expression.

Elected leaders in Aurora on Monday voted to ban "no knock" raids by police.