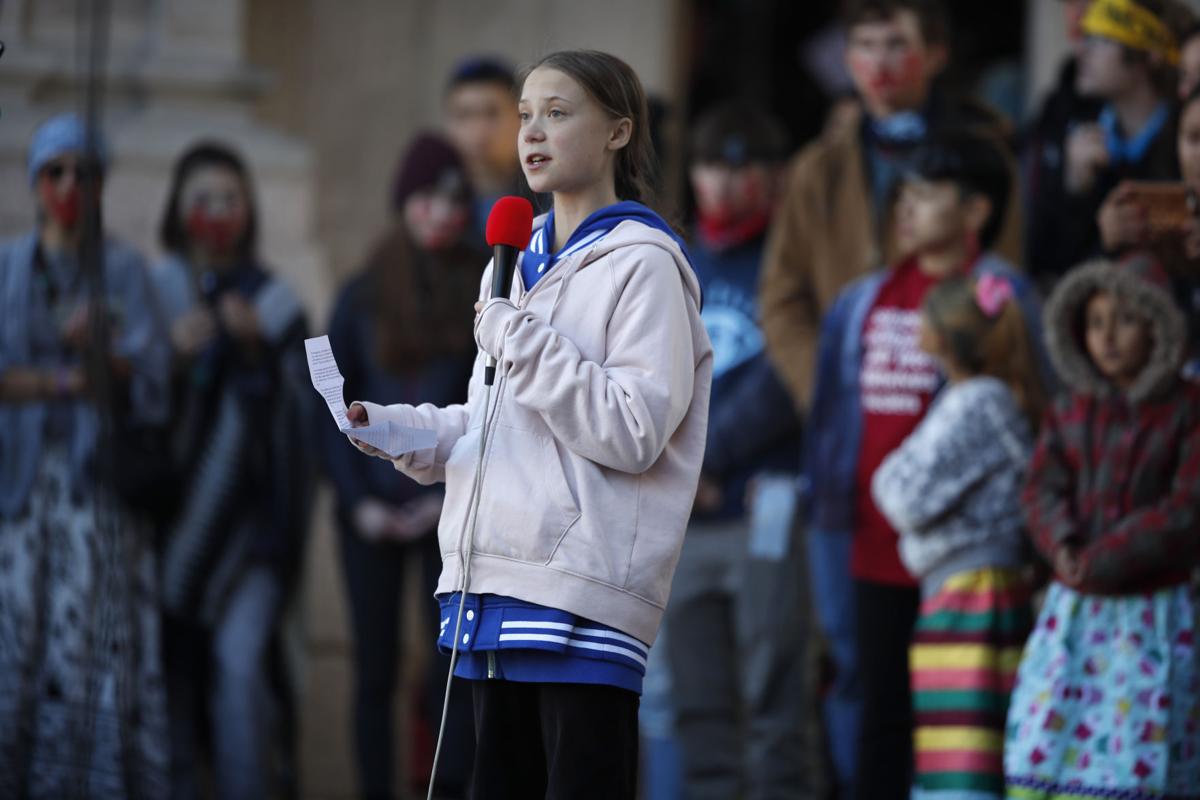 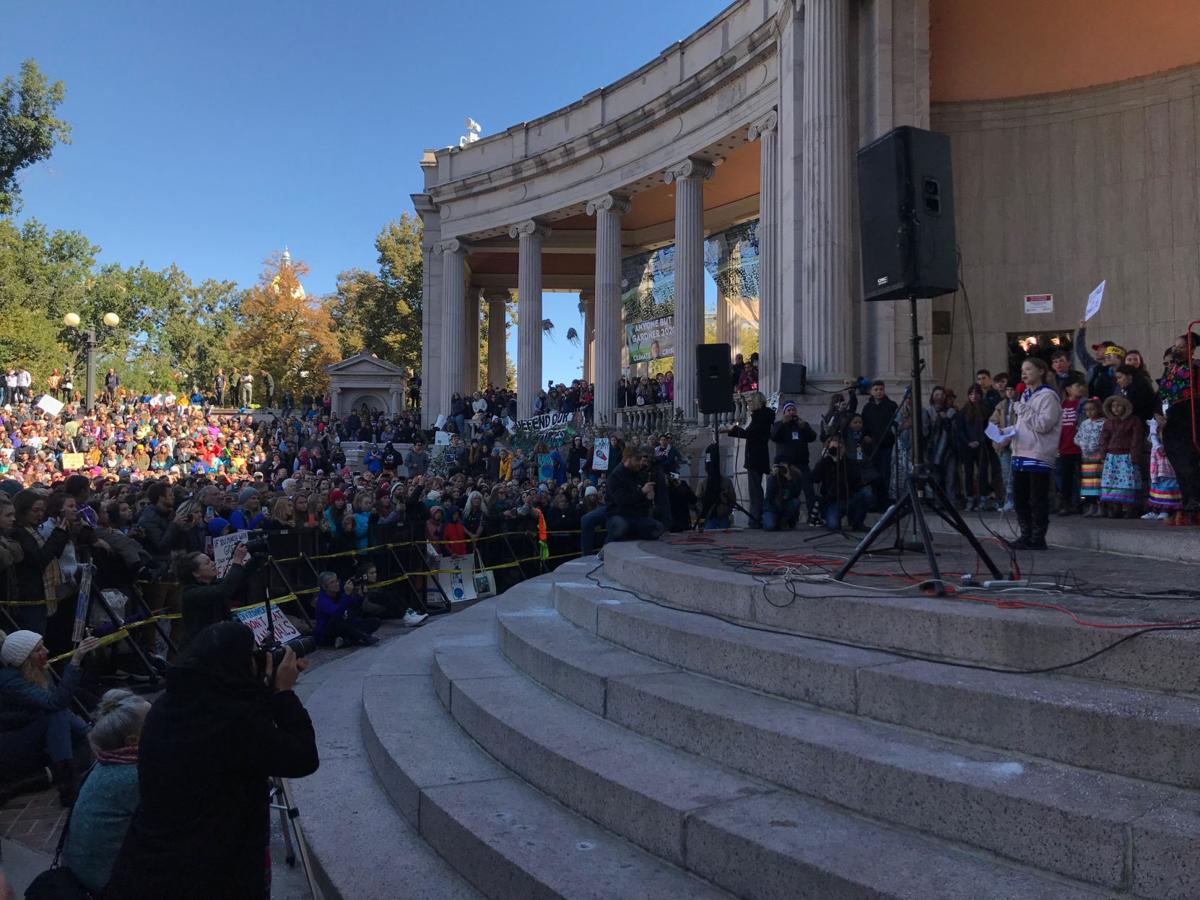 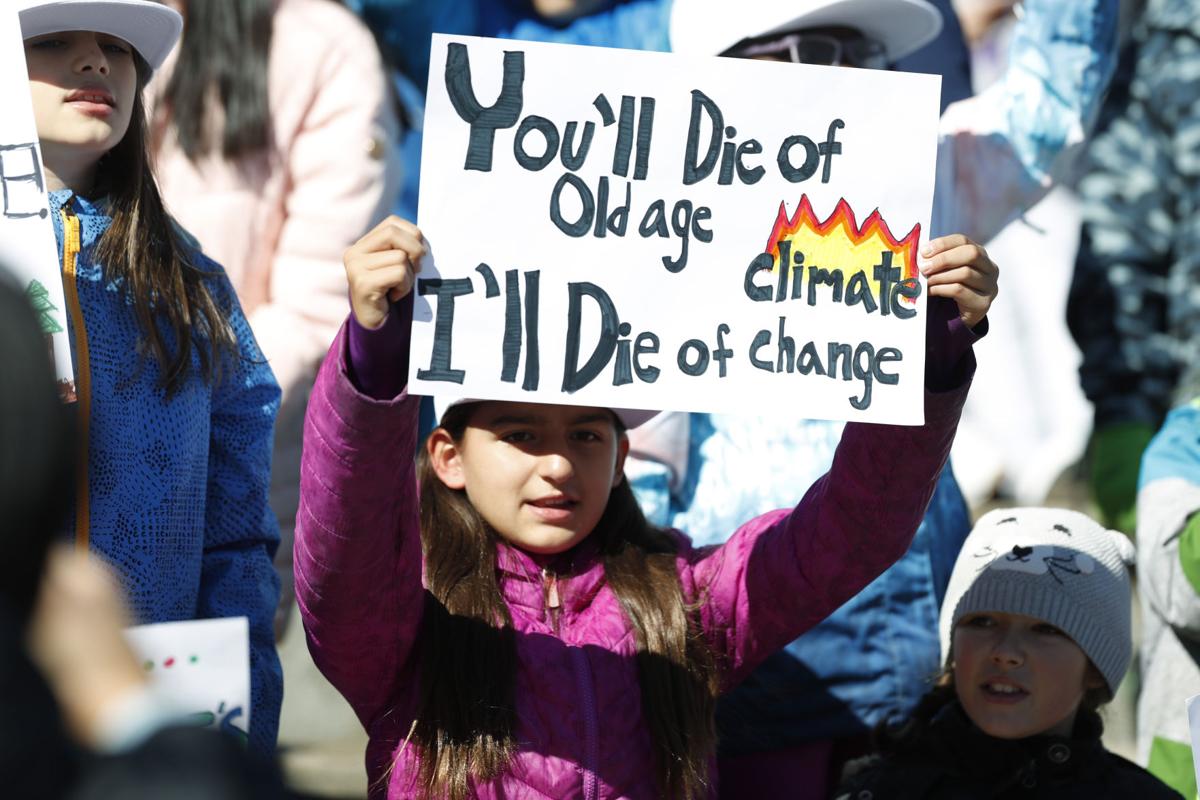 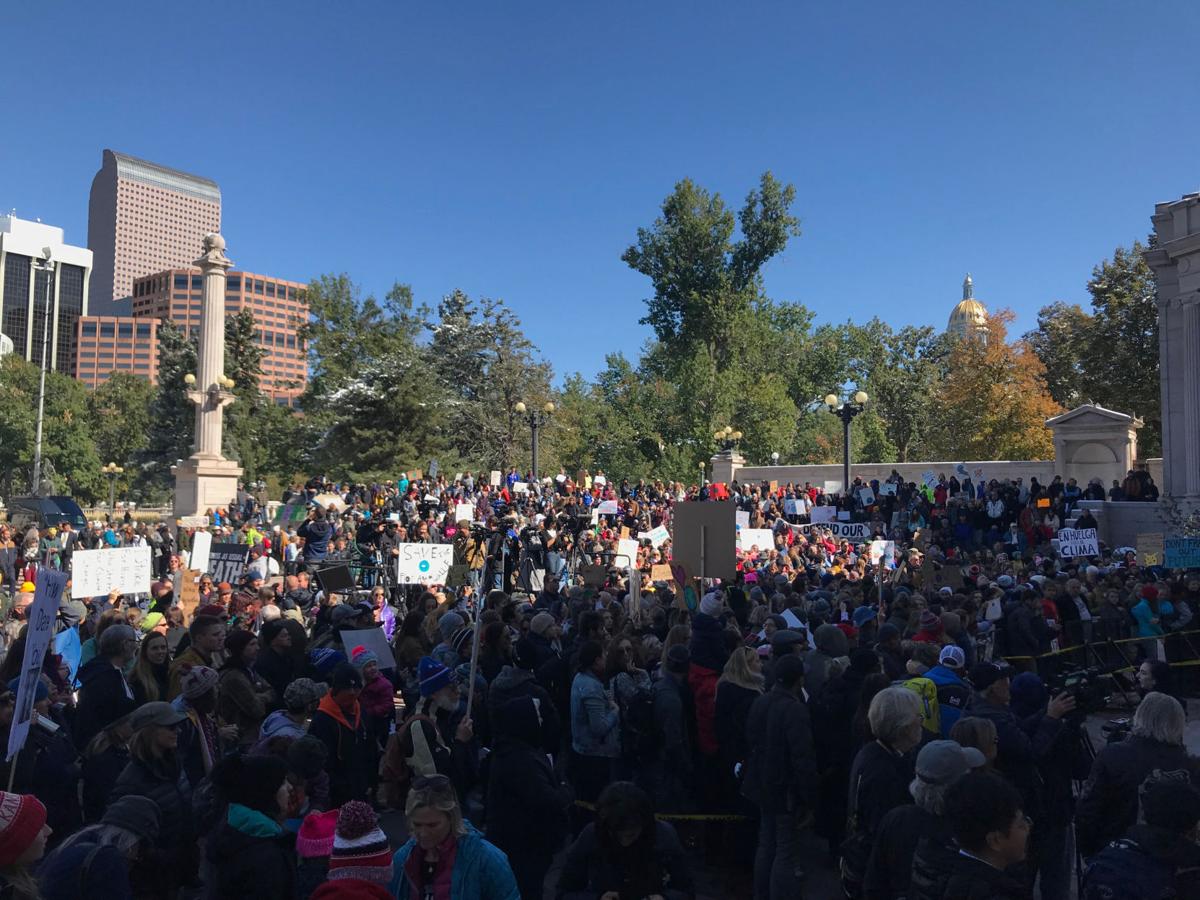 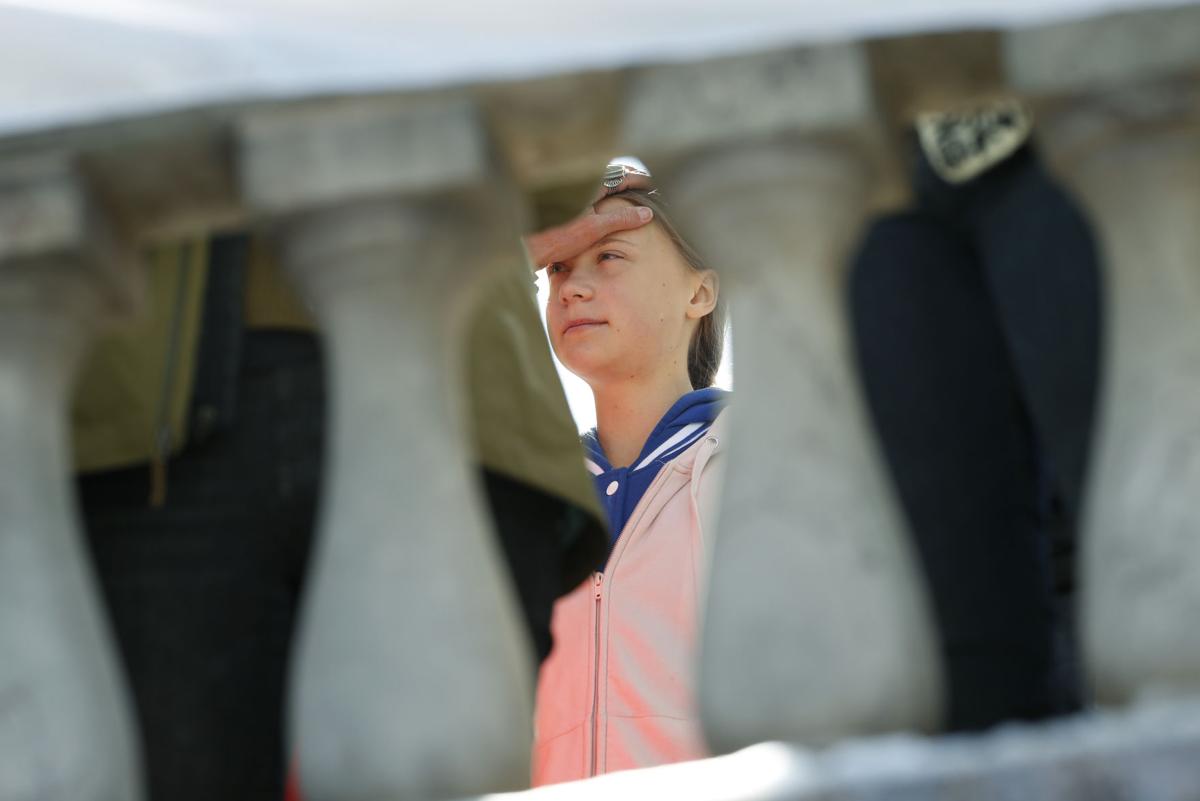 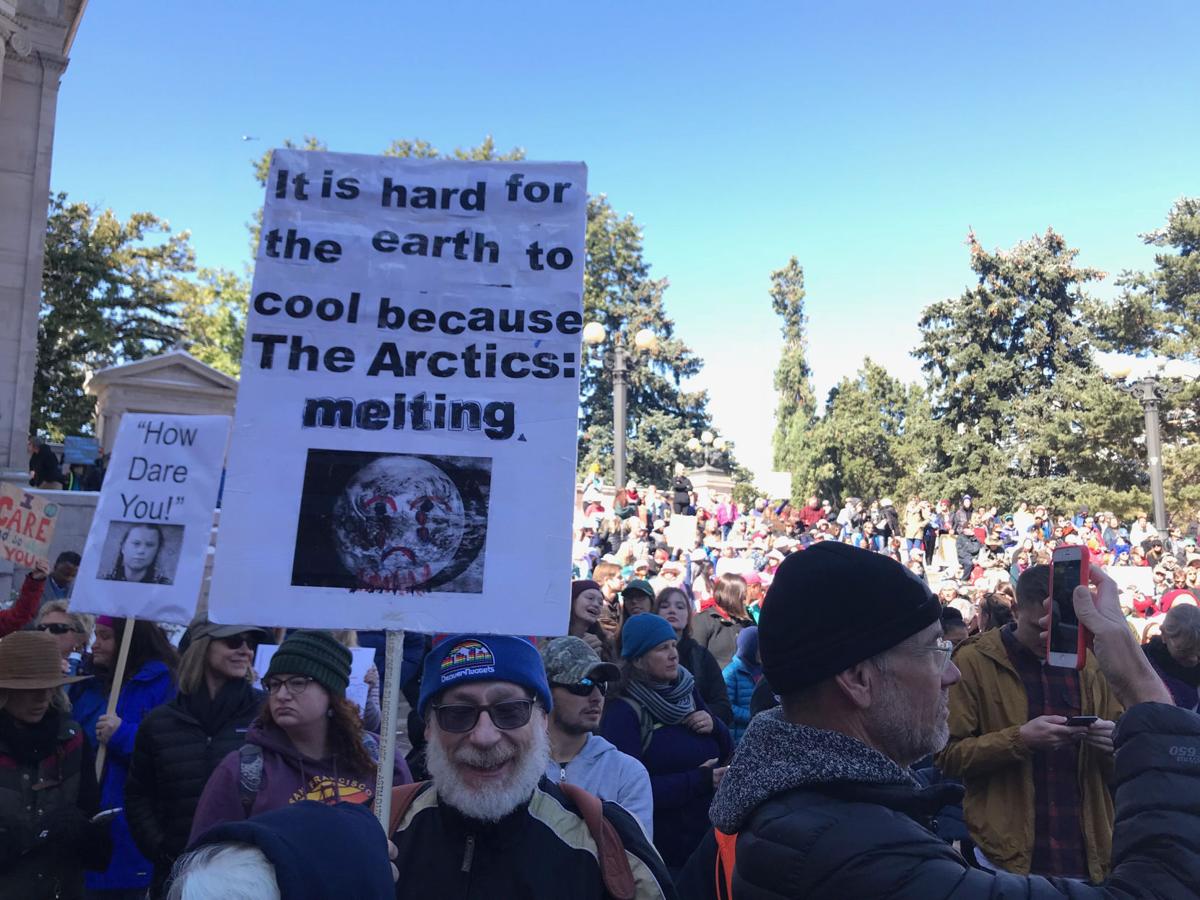 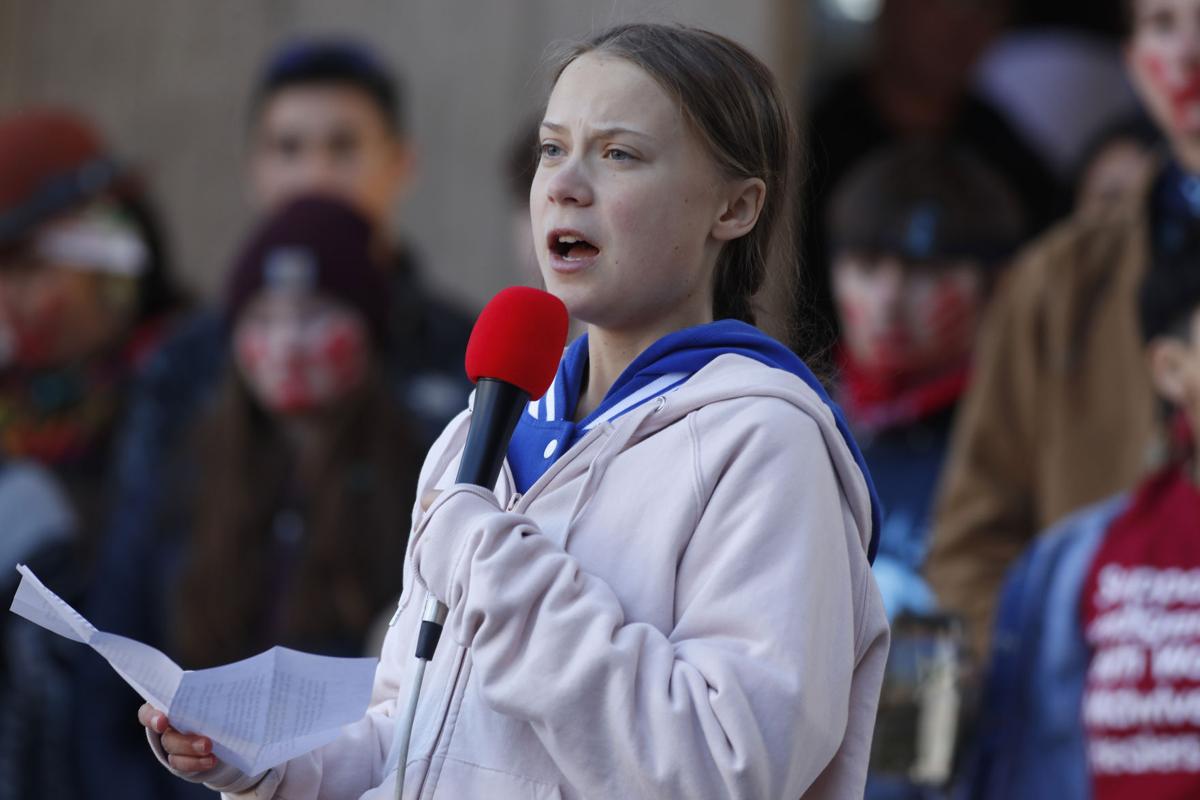 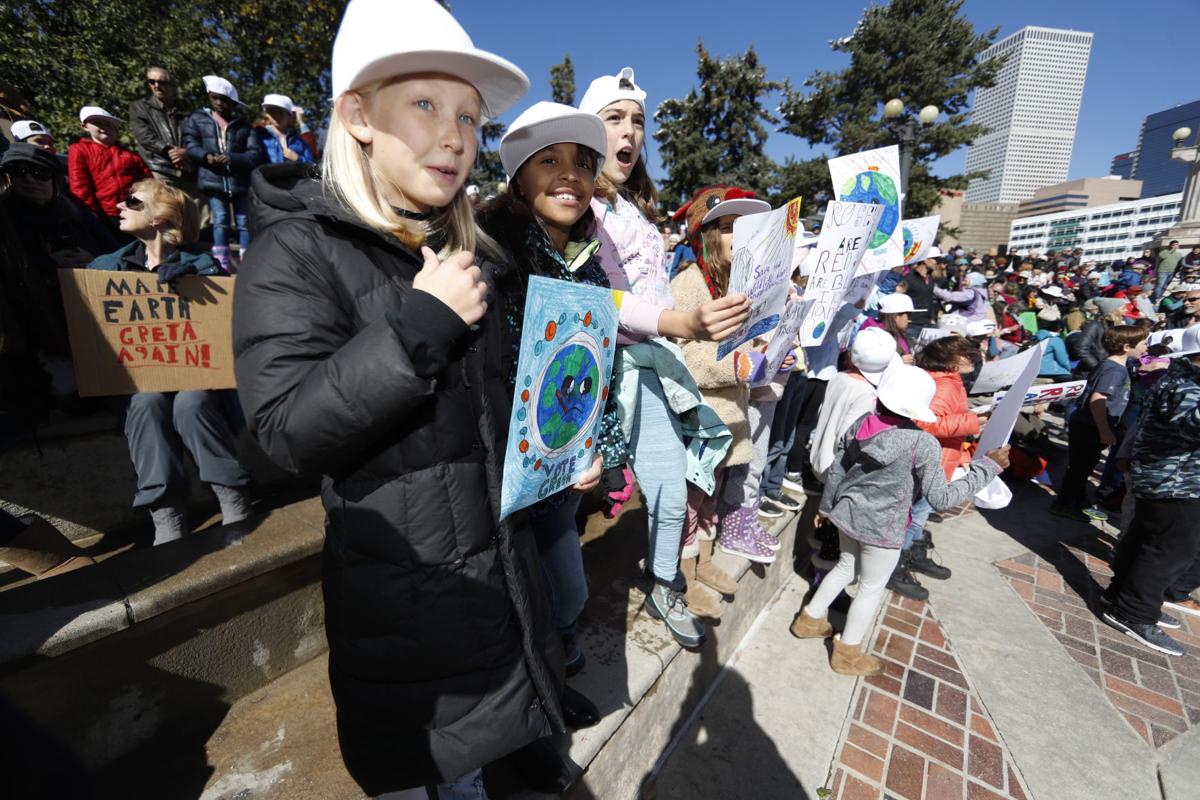 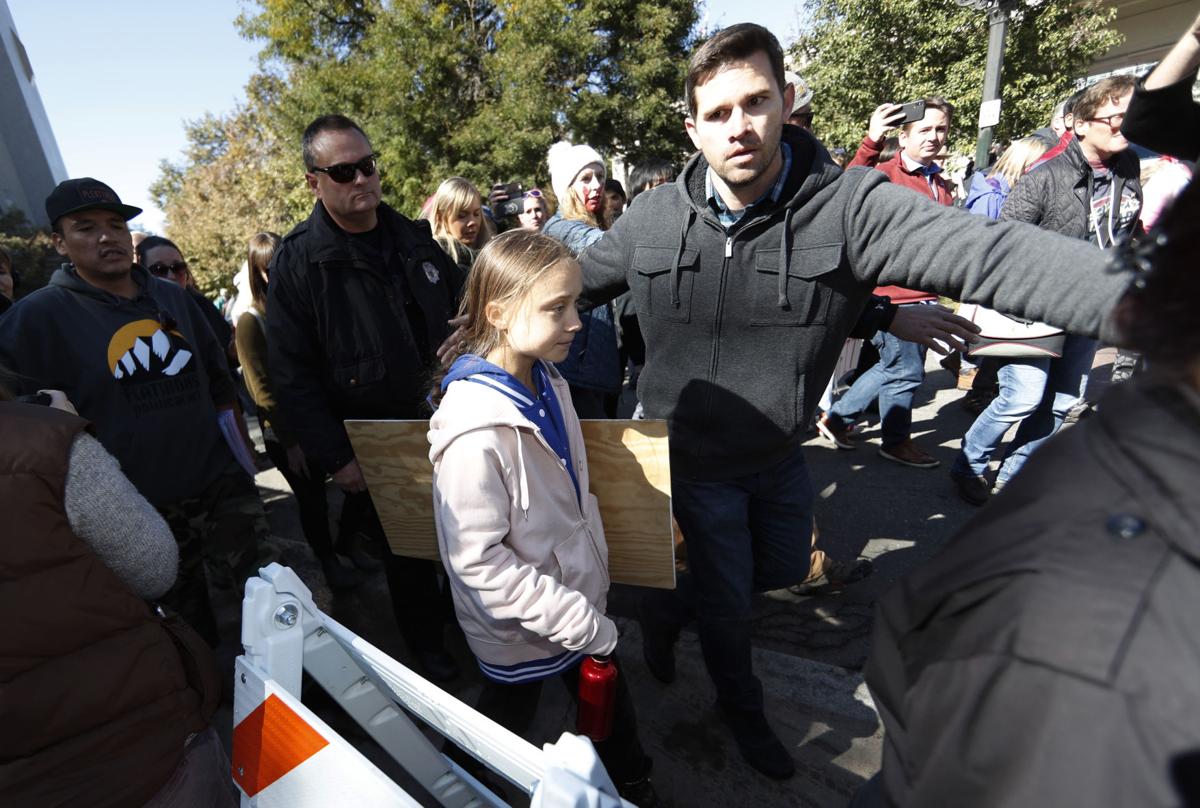 Escorted by a flotilla of police officers, Swedish climate activist Greta Thunberg, center, is led away after speaking to several thousand people at a climate strike rally Friday, Oct. 11, 2019, in Denver. The rally was staged in Denver's Civic Center Park. (AP Photo/David Zalubowski) 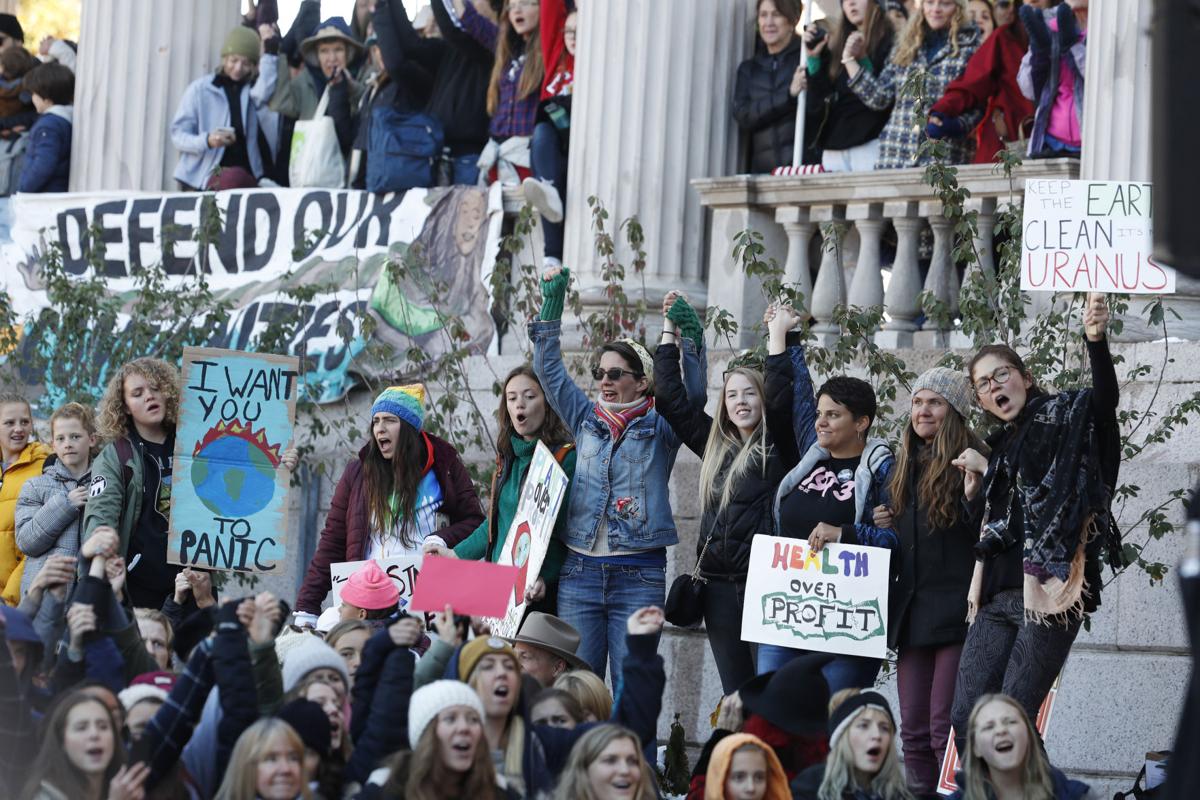 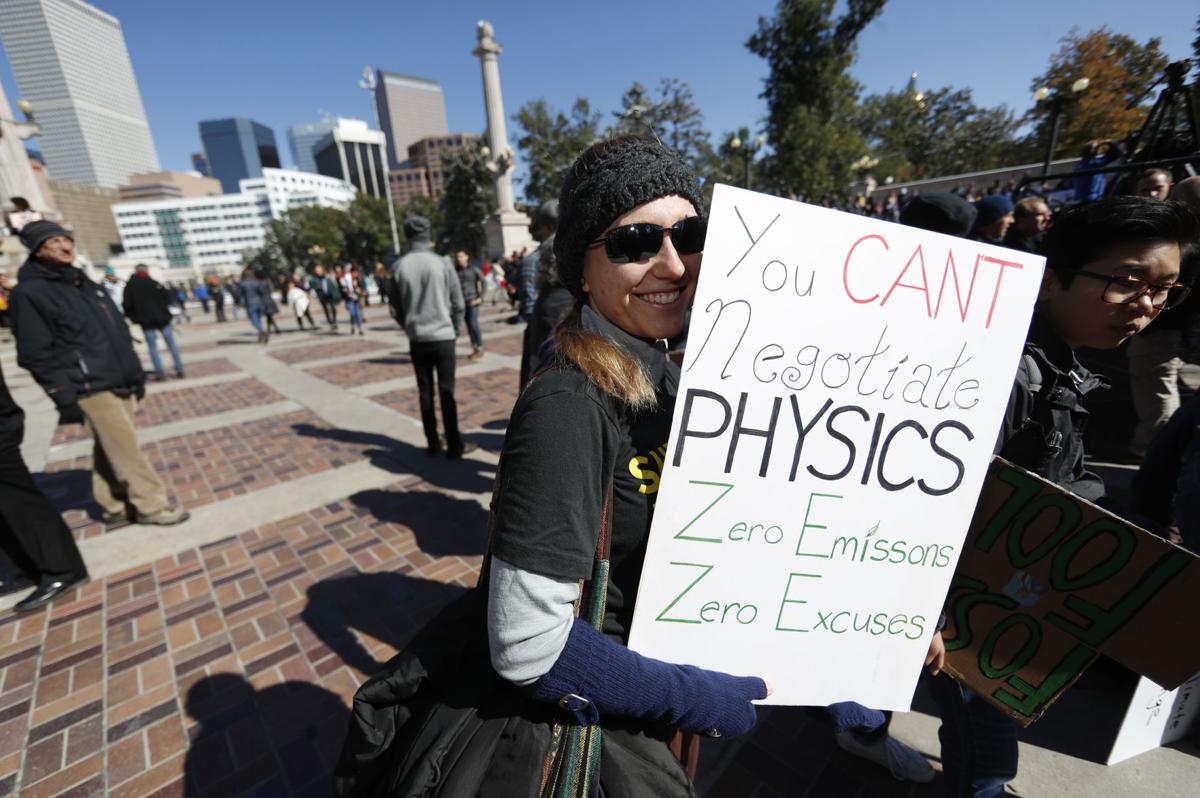 Heather Mirletz of Denver waves a placard as she waits for Swedish climate activist Greta Thunberg to speak at a climate strike rally Friday, Oct. 11, 2019, in Denver. The rally was staged in Denver's Civic Center Park. (AP Photo/David Zalubowski) 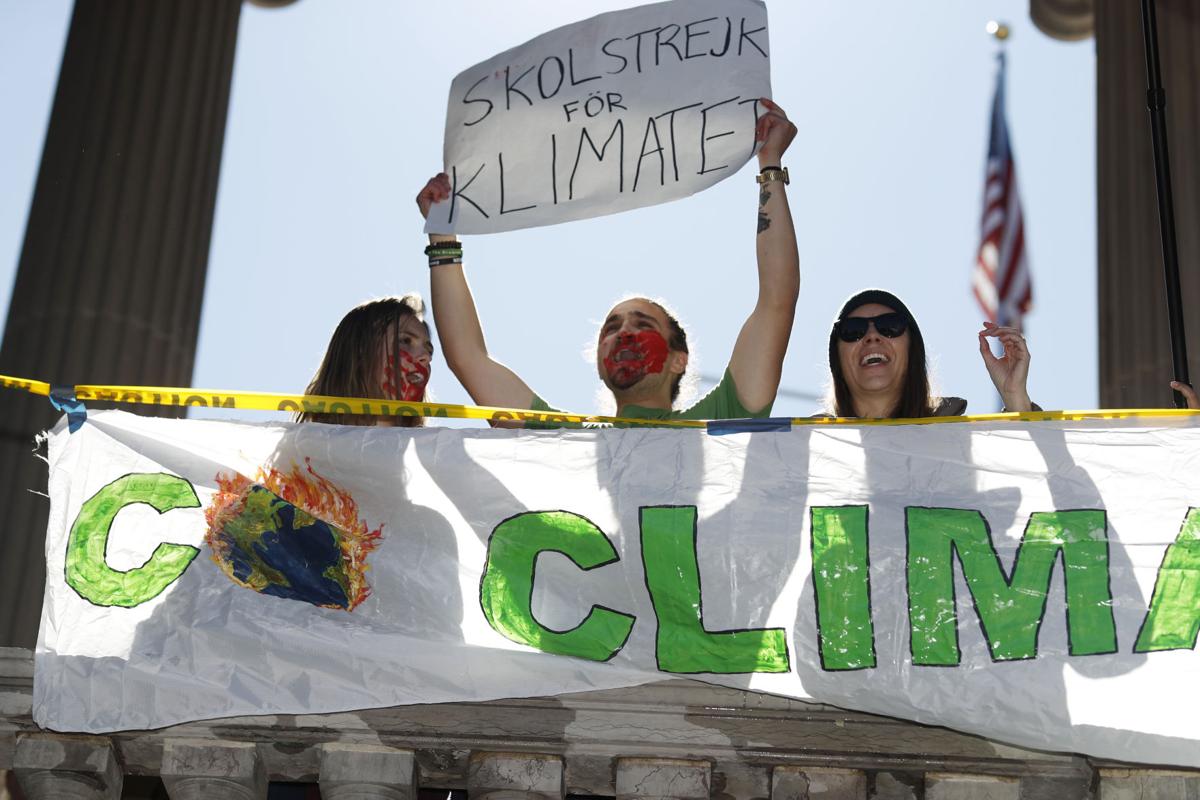 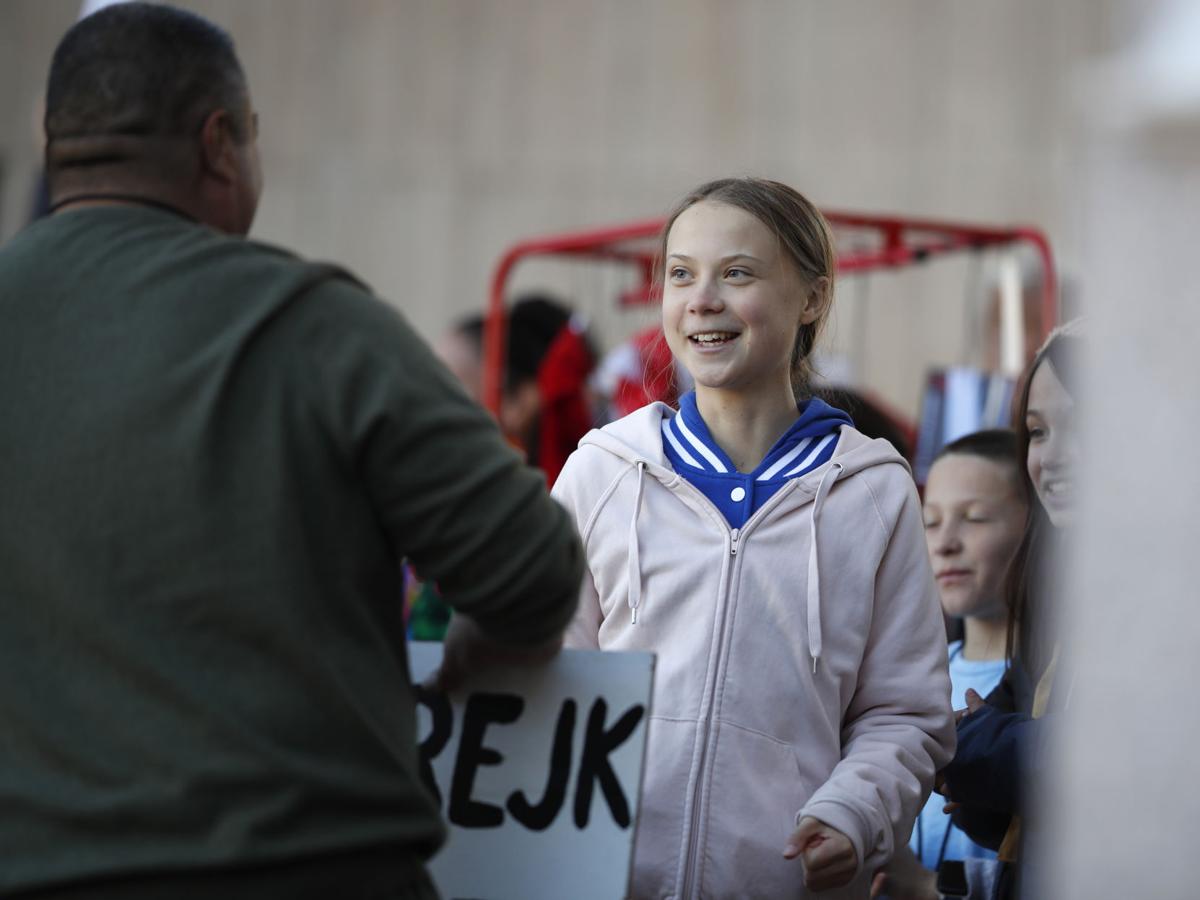 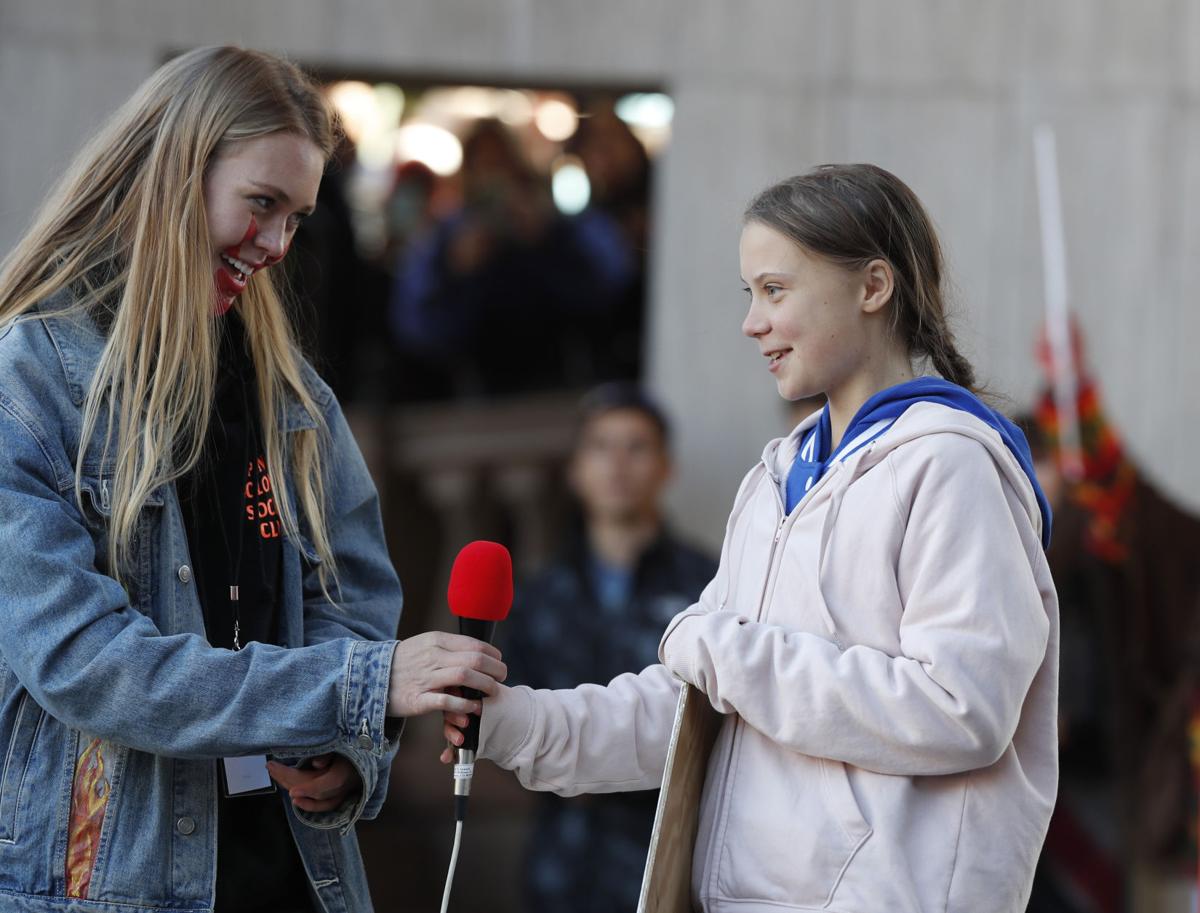 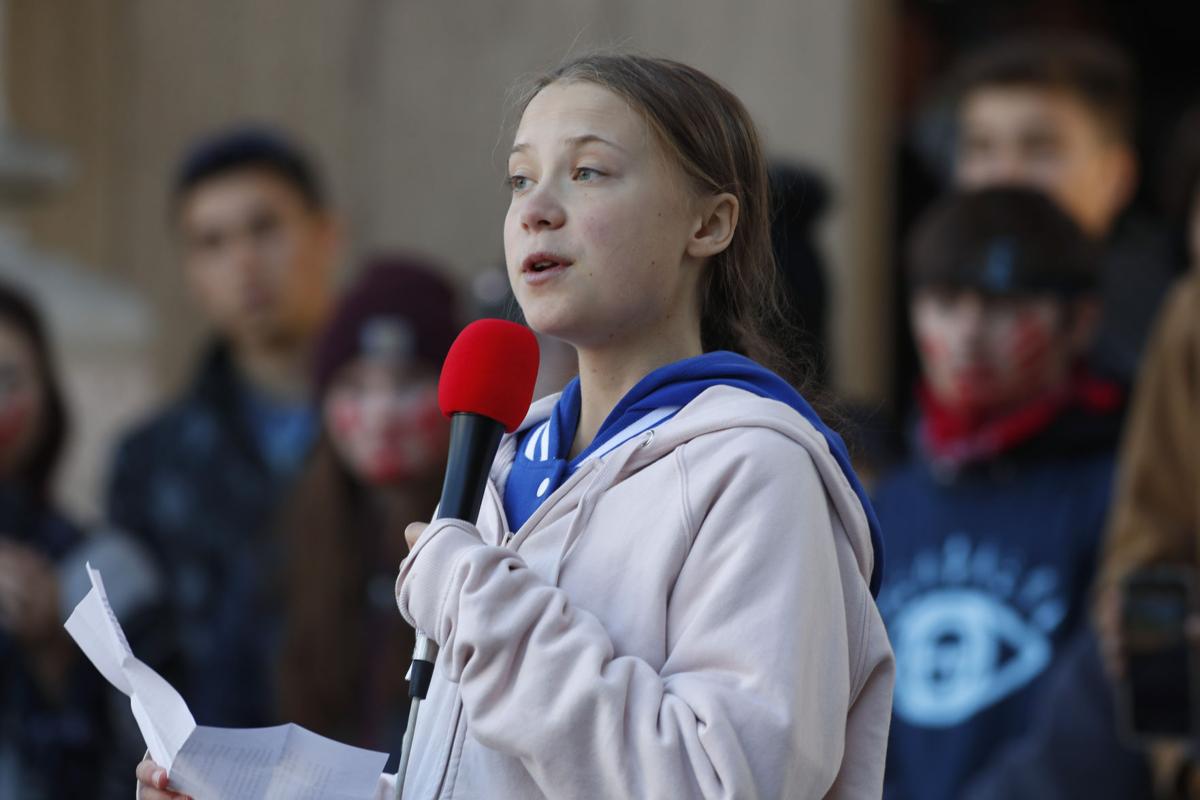 Escorted by a flotilla of police officers, Swedish climate activist Greta Thunberg, center, is led away after speaking to several thousand people at a climate strike rally Friday, Oct. 11, 2019, in Denver. The rally was staged in Denver's Civic Center Park. (AP Photo/David Zalubowski)

Heather Mirletz of Denver waves a placard as she waits for Swedish climate activist Greta Thunberg to speak at a climate strike rally Friday, Oct. 11, 2019, in Denver. The rally was staged in Denver's Civic Center Park. (AP Photo/David Zalubowski)

Teenage Swedish environmental activist Greta Thunberg delivered a familiar rallying cry to young protesters in Denver on Friday, calling on them to fight climate change and chastising adults in power for not doing enough.

"This is a movement with millions upon millions of people telling world leaders to act on the science. And we are demanding a safe future for everyone," Thunberg, 16, told a crowd gathered at downtown's Civic Center Park for a climate strike.

"It is we young people and future generations who are going to suffer the most from the climate and ecological crisis," Thunberg said. "It should not be up to us to take the responsibility, but since the leaders are behaving like children, then we have no other choice."

Her remarks, just a few minutes long, bore echoes of the blistering speech she delivered to world leaders at the United Nations last month.

"For well over a year, young people from all around the world have been striking from school every Friday, demanding world leaders to take responsibility and to unite behind the science. They have not done that. The people in power continue to ignore us and to ignore the current best available science," Thunberg said.

There’s so many people in Civic Center Park that I couldn’t keep tweeting while @GretaThunberg was speaking. But here’s more Greta: pic.twitter.com/g52YSupI3s

"How dare they?" she asked the crowd with the same disgusted tone she had while addressing U.N. dignitaries last month.

"How dare they leave this mess for their own children to clean up and solve? How dare they pretend that they are doing enough, when the politics needed are still nowhere in site?"

She became an overnight sensation after her Sept. 23 speech at the U.N. went viral, drawing both acclaim and criticism.

She sparked the "Fridays for Future" movement last year, when she sat in front of Swedish parliament every school day for three weeks, demanding the country's leaders act, according to the movement's website.

Many were school children who walked out of class to attend.

“It’s incredible that she has the courage to do what she’s doing,” 7th grade student Diego Gutierrez-Rughunath said of Thunberg. “I think more people need to stand up and tell the world that we are aware of what’s happening and we need to make a change.”

A hush falls over the crowd at the Denver climate strike. Demonstrators are having a minute-long moment of silence. pic.twitter.com/yJ9tSda5dB

Gutierrez-Rughunath was one of more than 60 students from Escuela De Guadalupe who participated in the climate strike.

Before Thunberg spoke, a panel of youth climate activists called for wide-ranging environmental actions, from anti-fracking policies to single use plastic bans.

“One thing I want you guys to know is that you have power,” said panelist Isata Kanu. “Do as much as you can. Call out to politicians. Lobby.”

The event also paid tribute to indigenous people and other racial and cultural minorities that have suffered injustices.

“Social justice is climate justice,” says panelist Wazhinguda Eli Horinek, another youth activist with the International Indigenous Youth Council. “It’s up to us to encourage each other, to uplift each other. It’s up to us to take care of the earth.”

The demonstration comes just weeks after a worldwide climate strike that the Thunberg also helped to inspire.

On Sept. 20, students across Colorado ditched class in protest, and thousands of people marched down 16th Street and past Union Station, converging on the state Capitol, Colorado Public Radio reported.

A wave of climate change protests swept the globe Friday, involving hundreds of thousands of young people, including those in Denver and Colorado Springs.

Get ready to hear a lot about global warming — or the "climate emergency " as the United Nations is calling it.

A new state record for the largest hailstone ever to fall in Colorado has been certified by state weather experts, and a second record — for the hottest day in the state's history — is just days away from being official.

The planet may be in peril — as the title of a candidates forum on climate change warned — but that wasn’t enough to get the two headliners in the U.S. Senate race to come to Colorado Springs for the event.

Most of Colorado begins new water year in low-level drought

The U.S. Drought Monitor says that nearly 70% of the state is in the lowest level of drought.

What they are saying: Withdrawal from Paris climate accord

On Monday, the Trump administration notified the United Nations of its intent to withdraw the United States from the Paris Agreement, effectiv…

U.S. Sen Michael Bennet announced that he is a new member of the bipartisan Senate Climate Solutions Caucus.