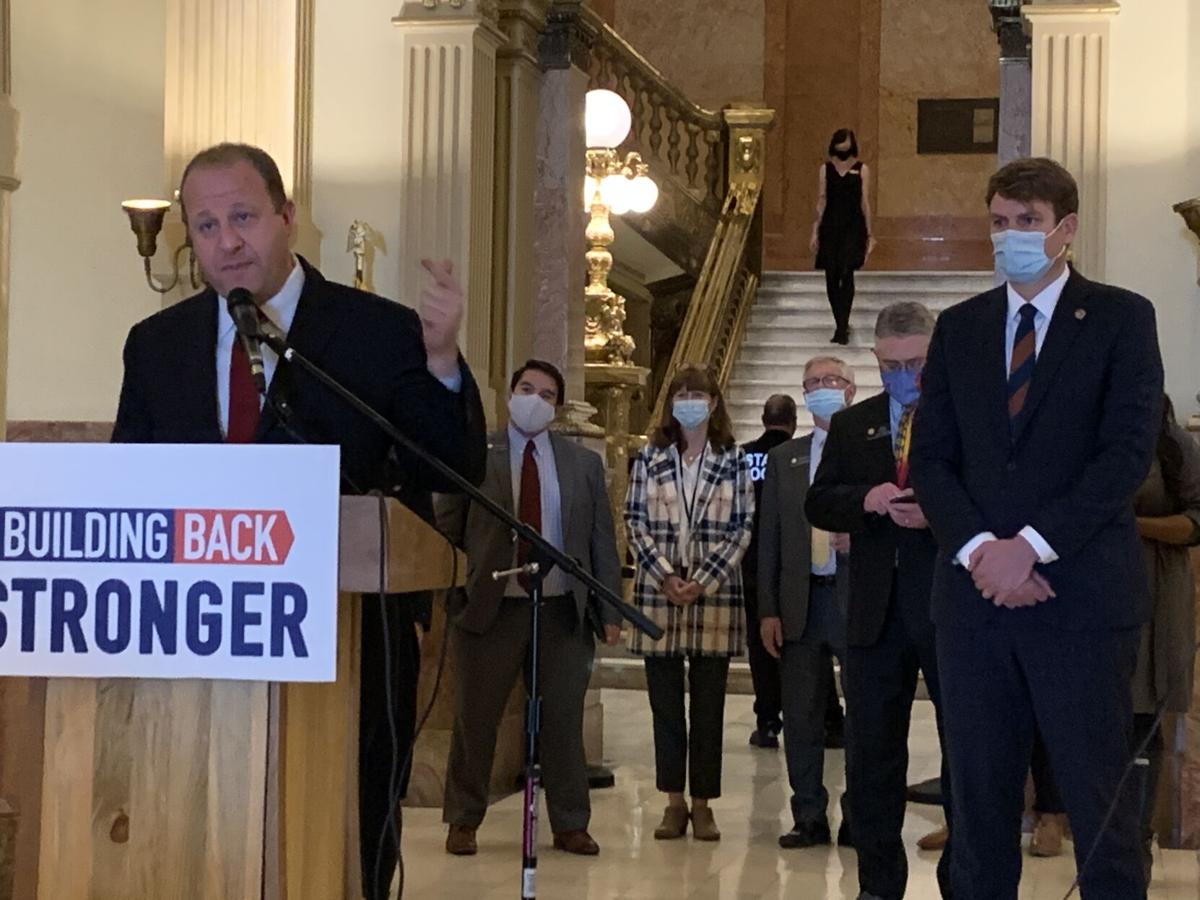 Gov. Jared Polis and lawmakers announce statewide listening tour to get ideas on how to spend $3.9 billion in federal stimulus funds. 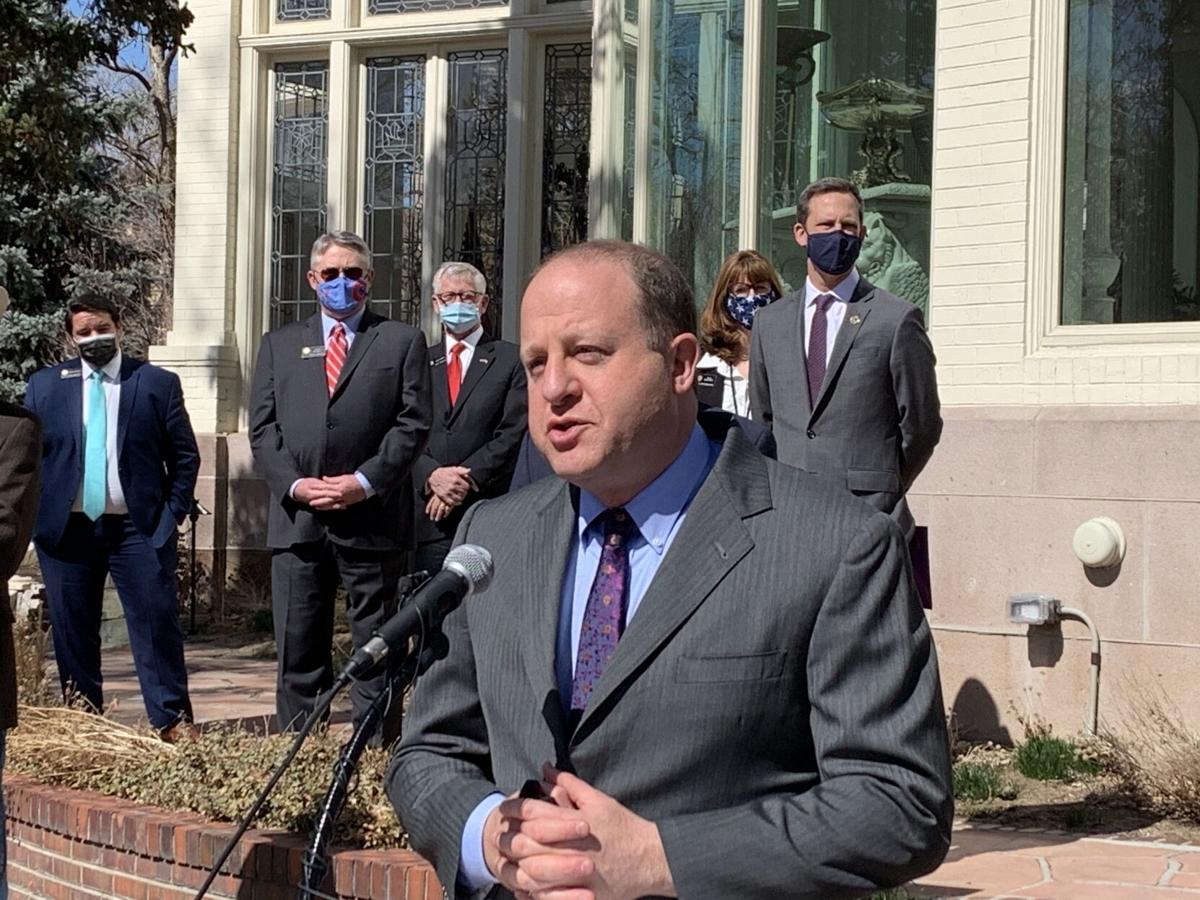 Gov. Jared Polis and lawmakers announce statewide listening tour to get ideas on how to spend $3.9 billion in federal stimulus funds.

Gov. Jared Polis, State Treasurer Dave Young and legislative leaders intend to conduct a statewide listening tour to solicit input on how to spend billions in federal stimulus dollars headed Colorado's way. The tour will start in Pueblo on March 28, with a second stop in Grand Junction to follow. Additional stops for the two-week tour have not yet been announced.

Colorado's portion, according to a budget document released last Friday by the governor's Office of State Planning and Budgeting (OSPB), is estimated at $27 billion. OSPB reported the money would go to:

The statewide tour, to be known as the "Build Back Stronger Statewide Listening Tour," will be primarily focused on $3.9 billion in federal stimulus funds, according to state leaders at a Monday press conference. Those dollars are on top of a $700 million state stimulus rolled out by legislative leaders two weeks ago, based on more-than-expected revenue in 2020-21. A revenue forecast released last Friday indicated another $500 million could be available for additional stimulus, all in one-time money.

The tour will visit nine regions, including Southern Colorado, the Four Corners area, Denver metro and other areas around the state. They would also solicit input from town and city councils and county commissioners, and from nine sectors, including health care, tech, tourism and hospitality and agriculture, as well as input from Latino and African-American communities.

Polis said the total amount will include many different pots of money that will go to local and state government, school districts, higher ed and state agencies. This listening session will be informative for all the different forms of aid, he said.

Ideas will be solicited through virtual meetings as well as in-person gatherings. But there are still a lot of unanswered questions that would have to be addressed in the coming weeks. Officials said Monday while they believe they will have up to 3 1/2 years to spend the money, through December 2024, whether those dollars show up in one payment or two is still unknown. Federal guidelines have not been announced, although Sen. Dominick Moreno, D-Commerce City, chair of the Joint Budget Committee, said Monday that the information so far is that the federal bill is pretty permissive on how those dollars can be spent.

The intent is to have the listening tour completed and legislation drafted while the 2021 session is still in progress.

"The best ideas come from listening to the people of Colorado," he said. "This is an unprecedented opportunity" to boost Colorado's economy. "How we choose to invest the Colorado portion ... will determine how rapid the recovery is."

Senate President Leroy Garcia, D-Pueblo, said that rural Colorado and agriculture have had to face more than their fair share of challenges during the pandemic.

This is a unique opportunity for the executive and legislative branches to work together on strategic discussions, added Senate Minority Leader Chris Holbert, R-Douglas County.  The listening tour is an exciting opportunity expand that discussion" to city councils, county commissioners and perhaps even school boards, he added.

One idea floated during the press conference was whether those dollars could pay back the state's unemployment insurance trust fund, which is insolvent to the tune of $1 billion. Polis said he is open to using those stimulus dollars for that purpose — otherwise, it would fall to employers to cover — but that he wanted to hear people's ideas and not prejudge where the dollars could go.

Infrastructure could be part of the conversation, but it's also something that officials hope the Biden administration and Congress will take on. Speaker of the House Alec Garnett, D-Denver, said that the federal government is talking about an infrastructure package. Roads and bridges are a major priority for state Senate Republicans, added Holbert.

JBC member Sen. Bob Rankin indicated the listening tour, while initially scheduled for two weeks, may form the backbone for a network of conversations over the next two years. He also addressed one problem for rural Colorado: lack of adequate broadband infrastructure, which could leave many communities out of the conversation.

Rankin said he plans to reach out immediately to county commissioners and city councils, to see if they can get the word out and perhaps gather people together for community meetings in which to provide that input. Broadband service on the West Slope is sketchy in many areas, particularly south of Grand Junction, which Rankin said was exposed during the pandemic and especially for K-12 students and teachers. That will also include Club 20 and the Associated Governments of Northwest Colorado.

"We have work to do to get people involved," he said. "We do have time, but it doesn't mean we can't build this listening network over time and set money aside for evolving" needs. He noted the 3 1/2 year window for spending the money, stating that it gives lawmakers time time to work on these projects. He also noted that some of these communities are getting money directly.

"We can't look at the state spending in isolation. We have to look at the bigger picture, including the $700 million state stimulus plan, the fantastic revenue forecast we just got. I thought a year ago we would be struggling," Rankin said.

Perhaps the biggest problem the federal stimulus will have to tackle: how to get help to those who have not been able to recover economically from the pandemic. Last Friday's revenue forecast said that's almost everyone below $60,000 per year and particularly hard hit are low-wage workers. "We have to find innovative ways to get people back to work," Rankin said. "These listening tours have a lot to do for those low income folks" who are not recovering.

COVER STORY: ON THE MEND | As the state budget takes shape, repairs will require state lawmakers to weigh optimism and realitiy

If last year was about cutting, then this year is about stitching things back together with optimism, leftover money and federal dollars.

The all-important March revenue forecast from state economists said Friday that the worst of the recession is over. But the economic recovery has not hit low-wage workers and job losses in some sectors — hospitality and food service in particular — is still significant.