The commission was scheduled to hold the formal hearing on the complaint on April 28, but announced Tuesday it will be moved into May, date to be determined.

An interim procedural order issued Monday will depend on existing public health orders and guidance from the Chief Justice of the Colorado Supreme Court. The order indicated the possibility of a remote, web-based hearing.

The ethics complaints against Hickenlooper are tied to travel he took in 2018, travel "on private jets owned by for-profit corporations both domestically and internationally," according to the original complaint, which also said Hickenlooper "illegally accepted luxury hotel accommodations and expensive travel expenses from corporations."

A 31-page investigative report, conducted by the commission and released last November, did not draw any conclusions nor make any recommendations as to further action. The report focused on travel related to a June 2018 trip to Turin, Italy, for the Bilderberg Meeting, an annual forum "designed to foster dialogue between Europe and North America," travel to Connecticut in March 2018 for the commissioning of the USS Colorado; private travel to New Jersey in January 2018 and to a wedding in Texas in April 2018; and travel to Jackson Hole, Wyoming, in August 2018 to attend the American Enterprise Institute’s Jackson Hole Symposium.

Hickenlooper said in his response that the trips to Jackson Hole and the commissioning of the USS Colorado in Connecticut were tied to his official capacity as governor. Payment for air travel to the Bilderberg meetings was paid for "by either earned air miles or his personal credit card. The cost for the conference was several thousand dollars, which includes hotel, food, ground transportation, and other event expenses. Respondent stated that these conference costs were paid personally by him." The former governor provided credit card receipts for hotel costs.

The original complaint was filed in October 2018, before Hickenlooper left the gubernatorial office, by the Public Trust Institute. Former Republican Speaker of the House Frank McNulty created the institute two days before filing the first complaint. The Hickenlooper campaign claims the PAC America Rising is behind the complaint.

McNulty told Colorado Politics in November that "this investigation only underscores the fact that Hick is guilty of a pattern of illegal activity under Colorado law. There was no justification made for his travel on private jets or for the gifts he received as part of the Bilderberg meetings. We look forward to the commission hearing on this. It's an open-and-shut case."

Hickenlooper has maintained that the complaints are politically-motivated and intended to undermine his future political endeavors.

Hickenlooper has been attacked by state Republican lawmakers, the National Republican Senate Committee and his Democratic primary rival, former Speaker of the House Andrew Romanoff, for the sources of funds to pay his attorney, Mark Grueskin. State funds under the 2003 Jobs and Growth Tax Relief Reconciliation Act have been tapped to pay for Grueskin, at a rate of $525 per hour.

The commission did not announce a timeline for when they would reschedule the hearing. 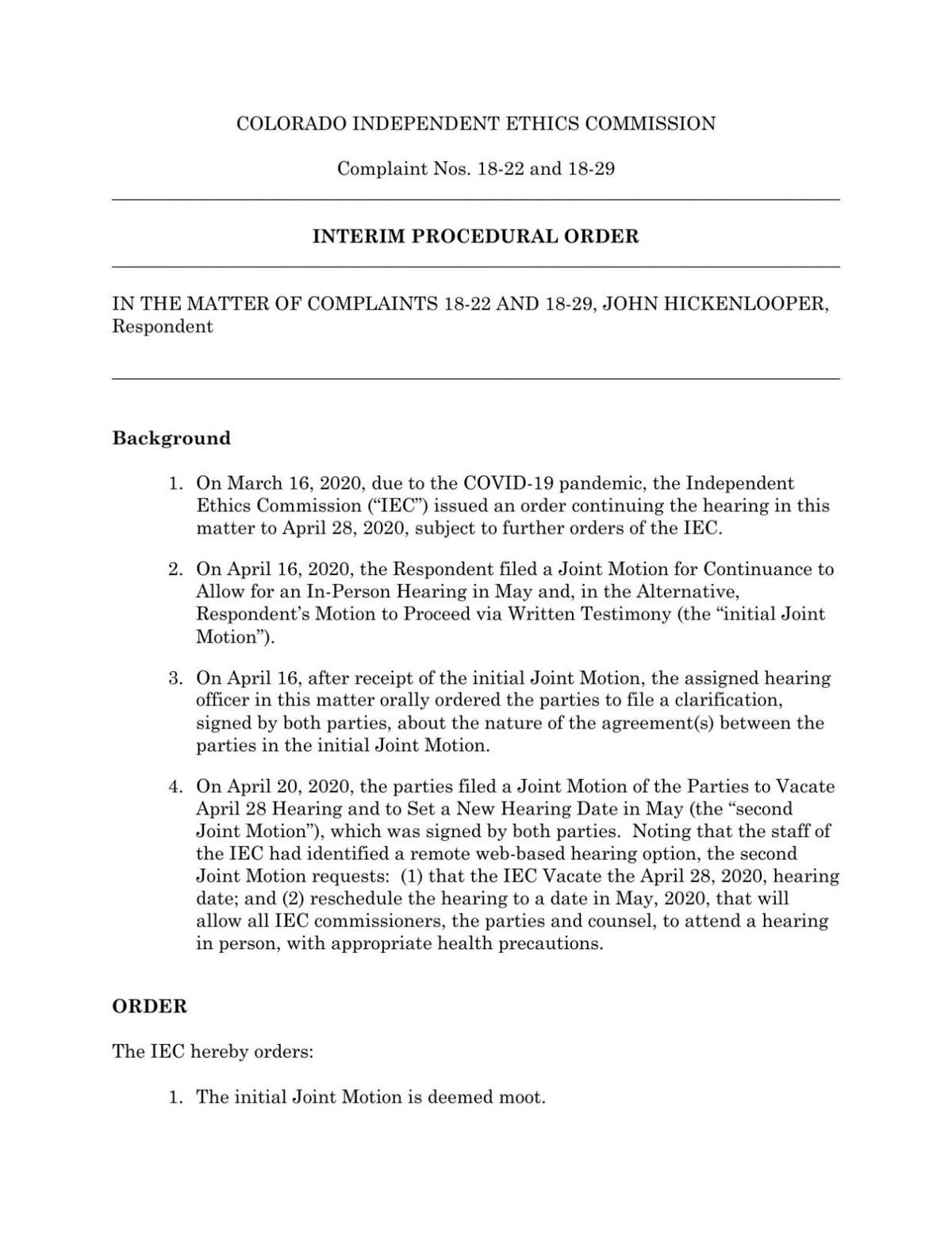 The Colorado Independent Ethics Commission has moved its hearing on two ethics complaints related to former Gov. John Hickenlooper's travel from March 24 and 25 to April 28, citing the coronavirus outbreak.