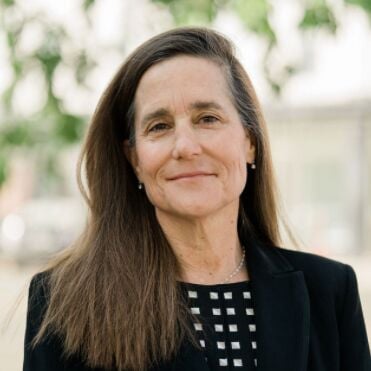 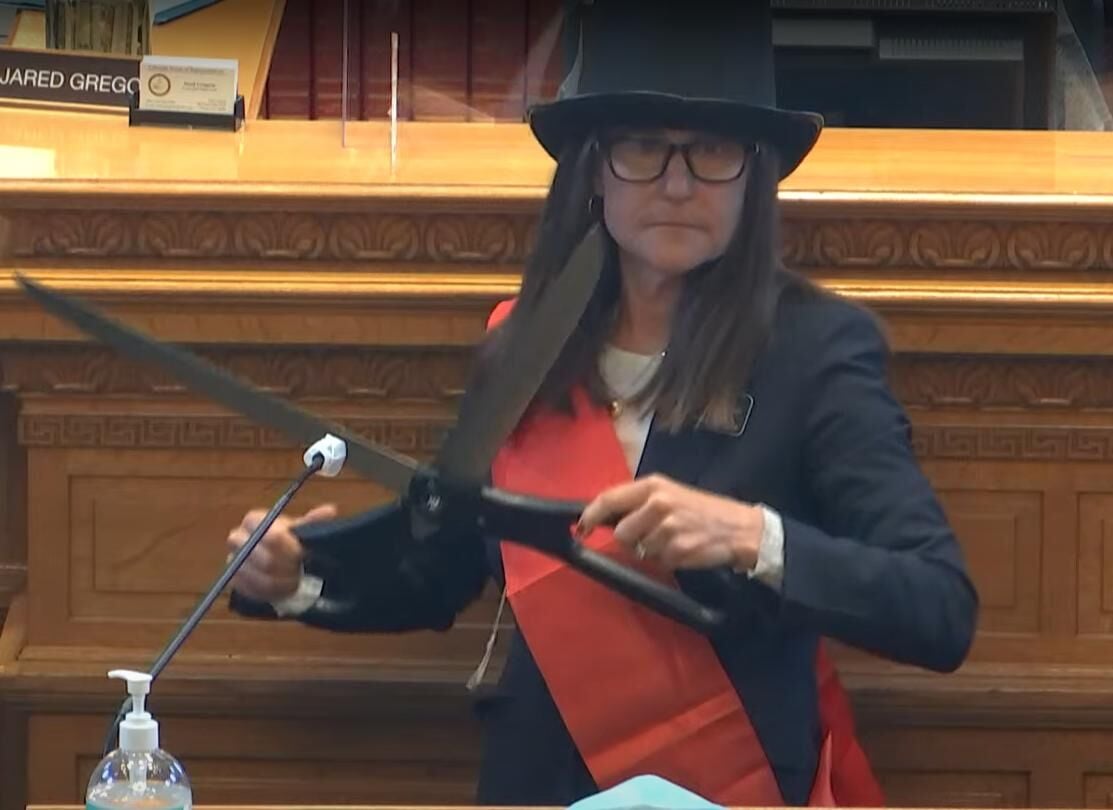 Rep. (and Mayor-elect of Fort Collins) Jeni Arndt on her final day in the House, showing off one of the duties she's take on as mayor. Courtesy Colorado Channel.

Rep. Jeni James Arndt, D-Fort Collins, resigned her House District 53 seat on Friday after a morning tribute from lawmakers, past and present.

Arndt, chair of the House Agriculture, Livestock and Water Committee, has served in the Colorado House since January, 2015. She was re-elected to the House last November with 75% of the vote. Arndt ran unopposed in 2016 and 2018.

Friday's tribute drew dozens of lawmakers to the House podium, who played Round Robin in reading off their own tributes, from members of the state Senate and from past lawmakers. The tributes were a mix of poignancy and humor (more humor) and showed the respect many lawmakers have for Arndt, and apparently, for her shoes.

The tribute was led by Rep. Cathy Kipp, D-Fort Collins and started off with Rep. Matt Gray, D-Broomfield, who joked that "Arndt is the worst and not only will she not participate, she will attempt to find these nice things we present to her and set them on fire quite publicly."

"We decided to persist nonetheless," Kipp said, and "wish to remind Rep. Arndt that none of this would have happened if she hadn't run for Mayor."

"There Arndt enough women like Jenny, it won't be the James without her," quipped Rep. Meg Froelich, D-Greenwood Village. Arndt was lauded for her critical thinking, empathy, humor, mentoring other lawmakers, knowledge about water, and common sense.

"To the woman who taught me whisky is for drinking, water is for fighting, unless it's a PBR," said Majority Leader Rep. Daneya Esgar, D-Pueblo.

Rep. Marc Catlin, R-Delta, said Arndt scared him to death when he was first elected. She offered to help him, which he didn't initially believe. But others told him she would help, and "it was with trembling heart and knees that I said 'I need help,' and we've been friends ever since."

Minority Leader Rep. Hugh McKean, R-Loveland, noted that Arndt was one of the the first to call and congratulate him when he first was elected. "That kind of attitude is what has made her such a pain in the ass thereafter. She just wouldn't go away." McKean said Arndt is one of the few people in the Capitol who is always asking, "How can I help, what can we do together? We have fought ("a lot," Arndt interjected), traveled, argued, dined and most of all laughed together....It will be a lonelier place in the House without her."

House Speaker Rep. Alec Garnett, D-Denver, noted that he and Arndt started in the House at the same time. "We came in together, we've grown together, you always put people before politics and state before party in every decision you ever made. You showed us how to do it right."

Former state Sen. Jack Tate, R-Centennial, referred to Arndt as his BFF and favorite bill co-sponsor. "Jeni will be my friend for the rest of my days."

A tribute from Weld County Commissioner and former Rep. Lori Saine, R-Dacono, said "you don't have to guess what Jeni thinks; her take on any topic is au natural, unvarnished and beautiful in its velocity and veracity."

A tearful Arndt addressed her colleagues from the podium one last time. "You guys ruined my going-away speech," she joked. "This is the exact scenario I was trying to avoid."

Arndt said she's only written two speeches in her seven years in the House, including Friday's. "I hope along the way I have stopped to say 'thank you,' to be kind and inclusive and sometimes to share a joke. And if I failed in that at least I'm saving you a long speech.... I hope I've pulled my weight and carried the load, not just in policy but in protecting and nurturing the institution."

She wrapped up with a hat, ribbon and scissors, denoting one of the responsibilities of her new job. She then left and her name came off the House voting board.

In an interview with Colorado Politics after the election, Arndt said the most common question she was asked when she announced her mayoral candidacy was why she would do that when she had just won re-election to the House.

Arndt said she decided to run after a good friend, Kristen Stephens, who was mayor pro tem of Fort Collins, was elected to the Larimer County Board of County Commissioners last November. Arndt said she "decided to ask the voters if they preferred for me to stay [at the legislature] for another year or serve them as mayor."

Recounts for two city council seats were completed on Thursday, according to the Fort Collins Coloradoan, clearing the way for swearing-in new council members and Arndt.

A Democratic House District 53 vacancy committee, led by Randy Ross, will pick Arndt's successor. To date, three candidates have announced their intentions to succeed Arndt: attorney Dan Sapienza; Andrew Boesenecker, director of annual giving and stewardship for Colorado State University's Semester at Sea program; and Ethnie Groves Treick, a Fort Collins businesswoman and community volunteer who has served on the board of the BlueFlower Fund, which helps elect Democratic women.

Both Boesenecker and Treick have already filed to run for the HD 53 seat, since Arndt would have been term-limited at the end of 2022.

The HD53 vacancy committee will meet April 22 via Zoom, according to Ross, and nominations from the floor will cut off after that meeting. Voting in person will take place on Friday April 23 and Saturday April 24 in the Larimer County Democratic Party office at 606 Mason Street in Fort Collins.

Voters in four Colorado cities on Tuesday overwhelmingly passed local ballot questions put before them, voting to approve 11 of the 12 ranging from a tax increase to a ban on large grocers provided disposable plastic bags.