Coloradans have recall fever, and it hasn't been abated by changes to state law passed in the 2021 legislative session.

There have been a dozen efforts to recall elected officials this year, but these aren’t recalls of the governor or members of the General Assembly, as was often the case in 2020.

Instead, citizens have attempted to drive out their county commissioners in three counties and local officials in nine cities or towns. Some involve officials who were elected to their positions just last November.

Not only are the petitions (and the rebuttals submitted by officials targeted for recalls) not available on the local election websites, in Park County, you have to pay to even see a copy of the petitions, at $2.25 per page.

The newest to the list: recalls for two county commissioners (Dick Elsner and Ray Douglas) in Park County, largely over the county’s continued use of Dominion Voting Systems machines and public health orders for COVID-19. The three-member commission also serves as the county Board of Public Health, which is common for many small counties in Colorado.

According to the recall effort, the two commissioners signed a public health order that organizers said violated the 1st and 4th Amendments; that they approved a resolution on short term lodging “that, in effect, has removed the property rights from MANY Park County residents.”

They noted the commissioners voted to keep Dominion for Park County elections.

Petitions are currently being circulated with a due date to the Park County Clerk and Recorder around Nov. 7. Elsner was re-elected to his second term in November 2020; Douglas was elected to his first term in 2018.

Two recalls are scheduled to be voted on in October and November.

In Silverton, voters will decide on Oct. 12 if Mayor Shane Fuhrman, Mayor Pro Tem Sallie Barney and Trustee Jordan Bierma should be recalled. The petition for Barney said she took an oath to uphold the state constitution, “which shows she isn’t here to stand up for Silvertonians.” The recall organizers, all residents of Silverton, also claimed she didn’t support economic development and wouldn’t allow off-highway vehicles to be driven through town.

Similar arguments were cited in the petition against Fuhrman, as well as a claim that he has a conflict of interest tied to promoting projects that he would benefit from. For both Fuhrman and Bierma, petitions said they didn’t stand for the Pledge of Allegiance.

The Durango Herald reported last month that all three said most of the recall justifications were based on lies and that it is a waste of town resources.

The Nov. 2 general election for Avon will include recall questions for Mayor Sarah Smith Hymes and Councilwoman Tamra Underwood. The town challenged the recall petitions as insufficient, based on the number of signatures, but on June 23, the district court for Eagle County ruled in favor of the petition organizers, the Avon Recall Committee, and ordered the November election.

No candidates have filed to run for mayor or town council seat should the recall succeed, according to the Vail Daily. While the deadline has come and gone to submit a petition to be a candidate listed on the ballot, write-in candidates have until Oct. 27 to file affidavits to run for those seats. Should the recalls succeed, the Town Council would have 75 days to appoint replacements.

The Avon Recall Committee cites the officials’ refusal to repeal a 2% real estate transfer tax and for not using public dollars to save a historic barn, which had been approved by voters, as the justification for the recall.

Smith Hymes pointed out to the Vail Daily that two of the recall organizers are failed candidates for Town Council, and that the reasons for the recall are frivolous.

One recall still is awaiting judicial review before it can head to the ballot, and that’s because of the bill passed by Democratic lawmakers in the 2021 session that changed the law around recall petitions. Senate Bill 250 was billed as a clean-up by its sponsor, Senate Majority Leader Steve Fenberg of Boulder.

However, the bill made major changes in how recall petitions are handled, including that people who signed one recall petition for an elected official could not sign a second one for the same person if the original petition was certified as sufficient. That’s where the recall against Rio Blanco Commissioner Gary Moyer has run into legal complications.

The first petition against Moyer in 2021 was deemed sufficient in the number of signatures by Rio Blanco Clerk and Recorder Boots Campbell last April. However, a protest filed by Moyer resulted in the petition being invalidated on technical grounds (circulators didn’t wear badges, for example). So recall organizers went for a second petition, also deemed to have collected a sufficient number of signatures in July. Another protest was filed by a Moyer supporter, citing the change in law created by SB 250.

According to the Rio Blanco Herald Times, Campbell, acting as the hearing officer on the protest (she said no one else was available) decided that more than 300 signatures that appeared on both petitions were valid.

Because the first petition was invalidated, it’s like those signatures didn’t exist, Campbell told Colorado Politics.

Campbell said the attorney for Moyer, Suzanne Taheri, has filed a lawsuit in Rio Blanco District Court to challenge the decision, based on the signatures that appeared on both petitions, that Campbell was biased and not impartial and that she refused to recuse herself in the protest hearing.

Campbell said she received the district court summons Monday and that they have 21 days to respond. The recall has not yet been scheduled and it would have to be at least 60 days after the Nov. 2 election, she explained. No one has filed candidacy paperwork for the seat, although there is interest, Campbell said.

Moyer was elected to his first term in 2018.

Elbert County residents have for some time complained about the county commissioners being too generous to local developers who are building new neighborhoods on the county’s west side, near its border with Douglas County. Two of the commissioners represent just the western side of the county, with the third responsible for covering about three-quarters of the county’s total land mass.

In a response to the recall, Commissioner Chris Richardson reportedly said, “The personal attack ... is intentionally misleading, lacks context, and is purposely inflammatory. Nobody who wants truth or transparency should support this recall attempt.” 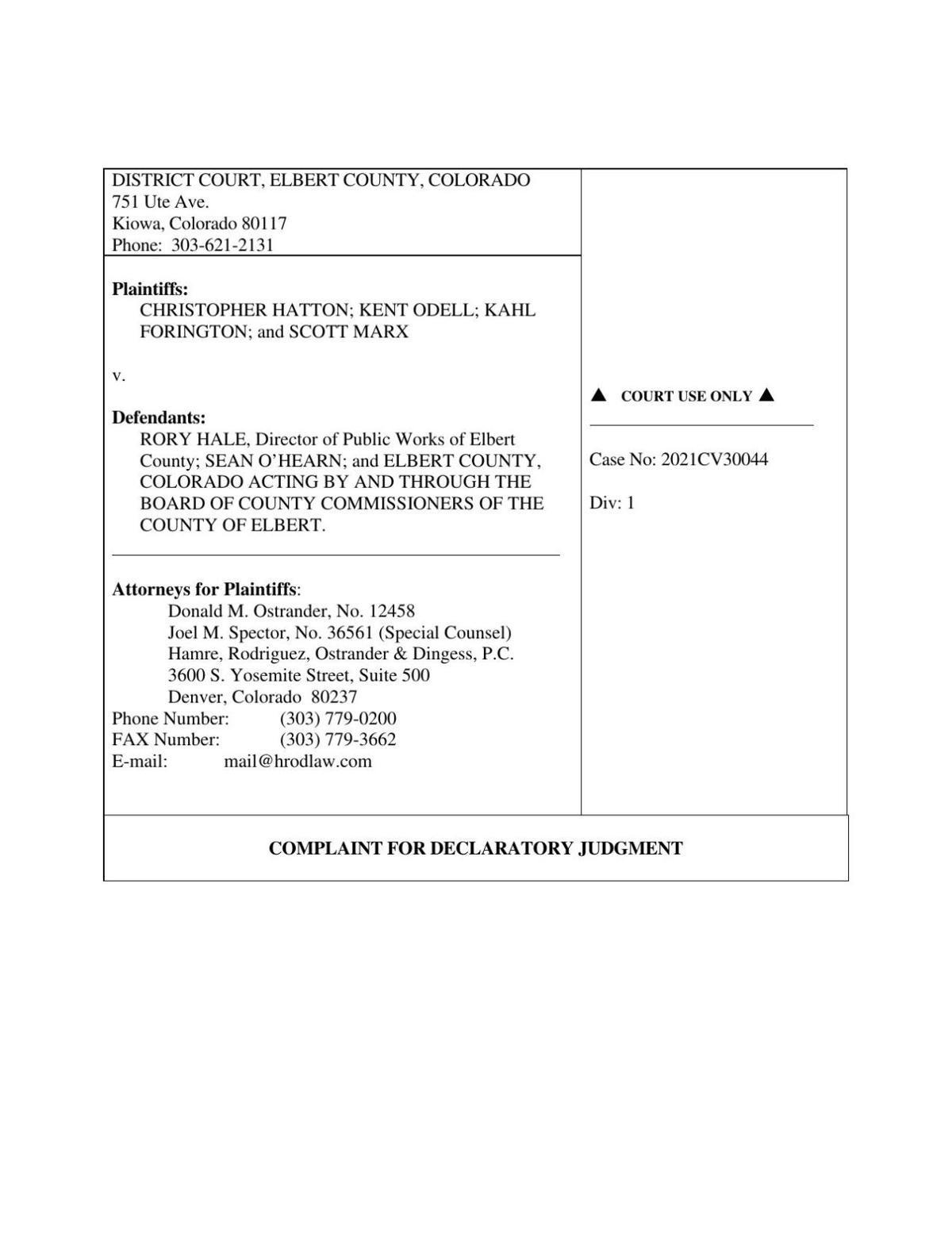 The county commissioners are also being sued in Elbert County District Court by some of the same people running the recall over their decision to allow a developer to ignore county guidelines for construction and improvements to county roads tied to the development.

Some recalls have already succeeded this year. Three of the five members of the Buckhorn Valley Metropolitan District in Gypsum were recalled in June, but in an odd twist the recall was viewed as “friendly,” to allow homeowners rather than developers to run the district. Even the district’s board president saw the advantages, according to the Vail Daily.

The district is in default on bond payments, another reason cited by recall organizers, although the board blamed the default on the 2008 recession and that the development is only half-built.

The Buckhorn Valley Recall Election Committee cited conflicts of interest because the board was run by developers, and according to a database maintained by the Special District Association, all the board members list Denver addresses. However, a statement to the community in March from the board said the directors are all “neighbors, residents, and/or representatives of landowners whose interests in building a thriving Buckhorn Valley Community are aligned and shared.”

District rules say that board members must either be a resident or own property in the district.

About half of the recall efforts in 2021 have failed, largely due to problems with petitions or failing to turn in enough signatures. That includes an attempt to recall two board of town trustee members in Berthoud and an effort to recall a Town Council member in Loveland.

Petitions fell short in communities such as Lake County, where organizers wanted to throw out the county coroner. Shannon Kent, who has faced multiple criminal investigations, later resigned and turned in his license to the state for his funeral home.

An effort to recall four Douglas County school board members based on COVID-19 issues was abandoned after the board voted in March to allow in-person learning.

Recalls in Westminster against the mayor and four city council members, took a somewhat complicated turn. Recall petitions for Mayor Herb Atchison and Councilmember Jon Voelz were deemed sufficient in May, but Atchison resigned shortly after. Voters rejected the recall for Voelz in July. Two other recall petitions, for city councilmembers Anita Seitz and Kathryn Skulley, didn’t have enough signatures and were rejected.

Still unknown: the recall effort against Gov. Jared Polis and Secretary of State Jena Griswold, to be launched by the same group that tried to recall Polis in 2020 but failed to turn in even one signature.

Citizens for Colorado, largely financed by recall organizer Lori Cutunilli of Breckenridge, said on its website that petitions would be circulated in July, which didn’t happen. The group’s Facebook page was shut down by Facebook in July because of misinformation, according to Cutunilli.

According to Ballotpedia, the high watermark for recalls was 2019 with 16 recalls. Nine of the 16 were either state lawmakers or the governor.

The group organizing a late July petition campaign to recall Gov. Jared Polis also has its eyes on Secretary of State Jena Griswold.