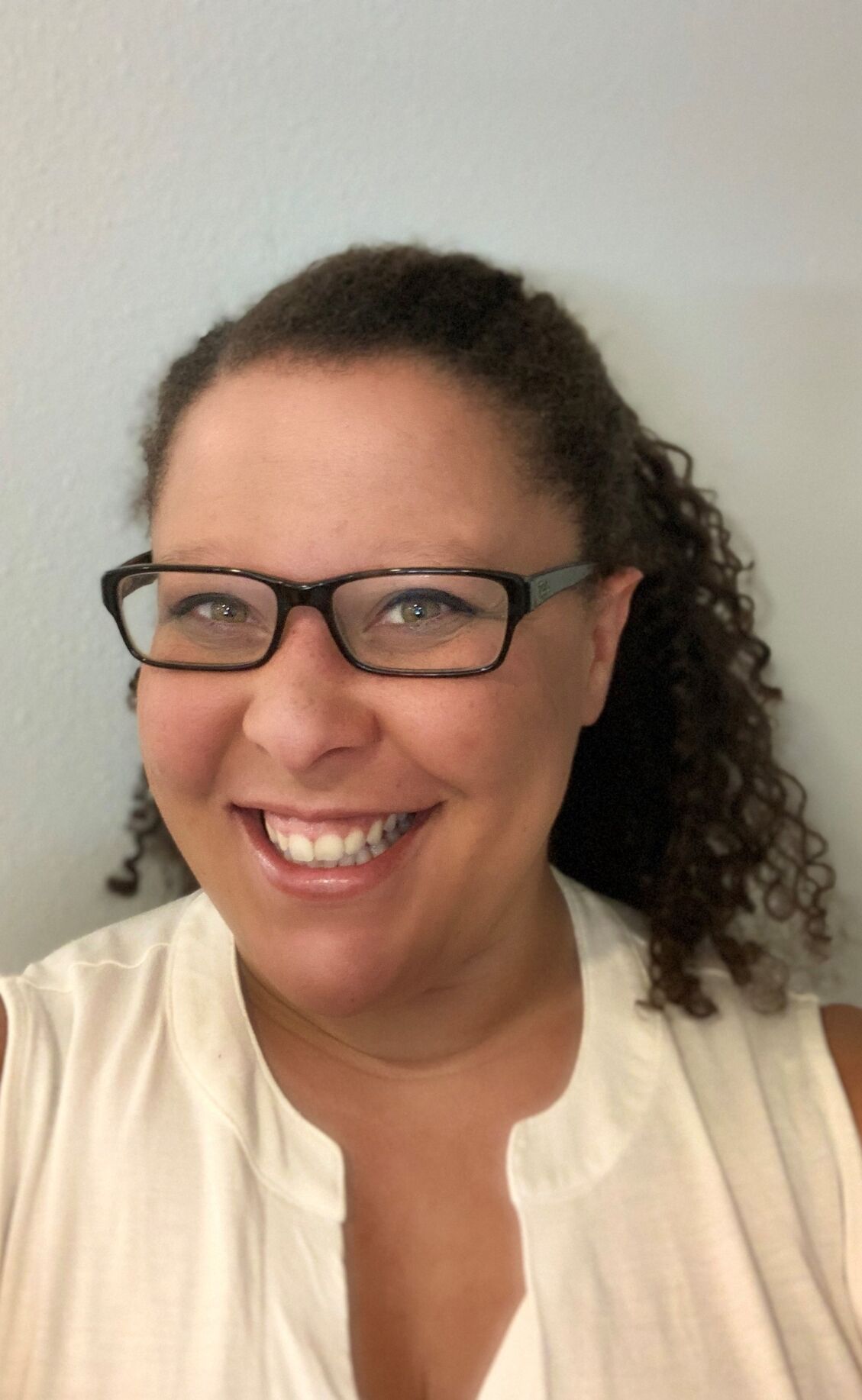 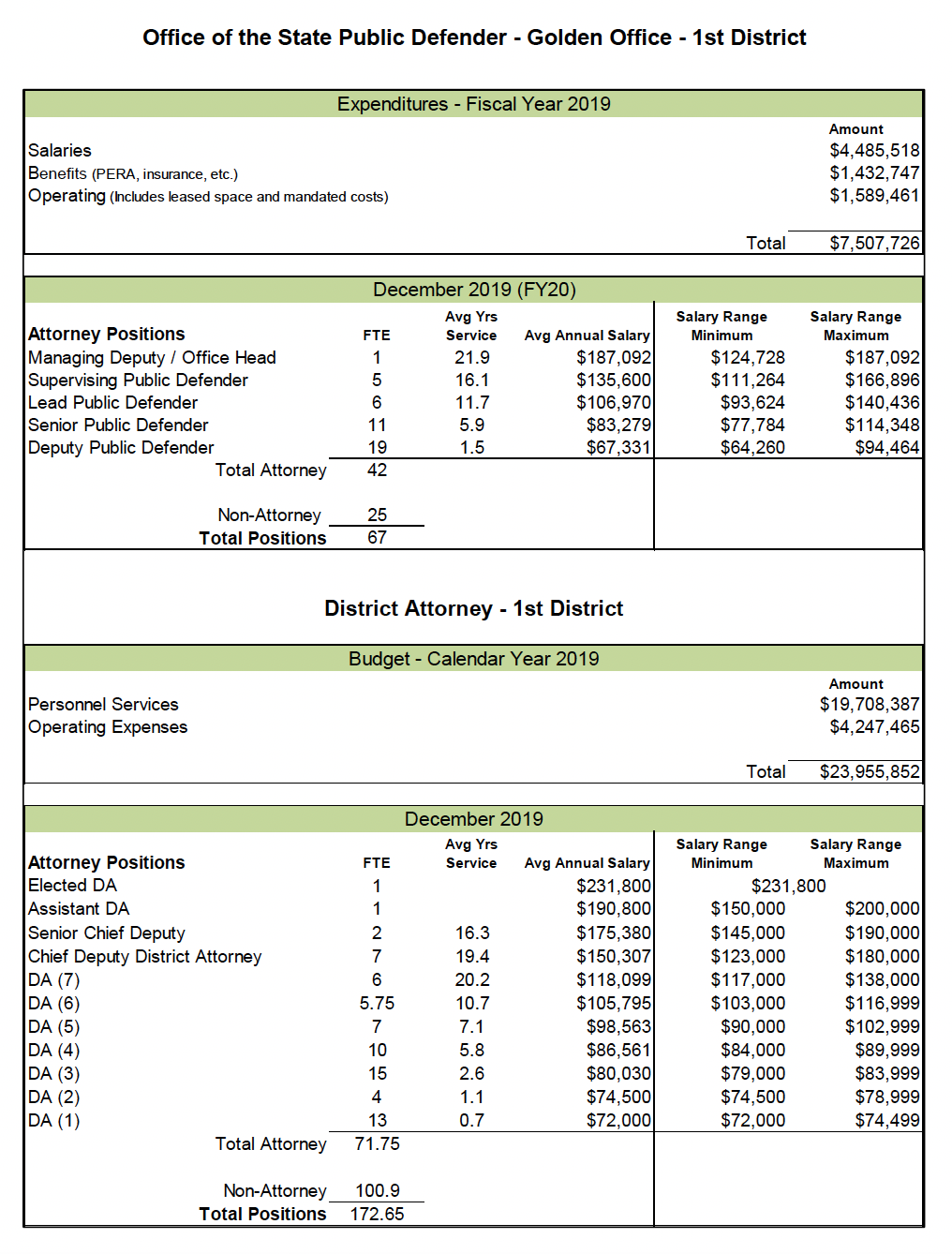 Source: 2019 Budget/Salary Comparison, prepared by the Office of the State Public Defender

Colorado Politics: How did you decide to pursue a career as a public defender?

Shandea Sergent: Like a lot of people, I went to law school thinking that I was going to help solve all of the world’s problems. I didn’t have an agenda or a rock-solid plan. I thought I wanted to go into environmental law, but then realized that someone who hates science and math isn’t going to enjoy the nitty gritty of water law maps and land use disputes.

It wasn’t until I had the opportunity to try mock trials that I found a passion in litigation. Ann England, the criminal law clinic professor at University of Colorado law, encouraged me to enroll. We had the opportunity to actually represent clients through the clinic program. People who were suffering through the unimaginable were being dragged through a system that never protected them in the first place. Criminal defendants are often victims who have not healed from past trauma. Seeing the injustice system in action sparked my “public defender” fire.

CP: The mental image most people probably have of a public defender is someone who is overworked, underpaid, and has little time and resources to spend on a case compared to corporate attorneys or prosecutors. How true is that of your experience?

Sergent: We are really lucky in Colorado. Colorado is a state system, so attorneys in Denver get the same training as attorneys in La Junta, Sterling or Montrose. We also have investigators, administrative assistants, social workers and paralegals.

Now, don’t get me wrong, we have far more cases than private criminal defense attorneys. We don’t make as much as most private criminal defense attorneys. We don’t have the budget to guarantee low caseloads and adequate support staff, but we have enough. Prosecutors, at least in the metro area, have higher salaries, more support staff and less “work.”

For example, I work in the First Judicial District (Jefferson County). Here’s the budget breakdown from pre-pandemic.

CP: I'm sure you've had cases that were emotionally difficult, or clients accused of doing especially heinous things. How are you able to do your job while also confronting any feelings that arise from the work?

Sergent: When you turn on the news and hear a story that is particularly shocking, i.e. a stranger kidnapping and abusing a child, it’s gut-wrenching. It sparks fear in parents and families. It shakes our individual belief of safety and security.

That being said, it is the nightly news headline or trending tweet for a reason. It’s rare. Most of our cases are not nationwide newsworthy. We will talk to friends and family about our cases and they will say, “Good grief, really? I didn’t even know that was a crime,” or “You can go to prison for that!?” Another common situation is where clients agree that they did something wrong but not to the degree or gravity that the prosecution alleges.

The difficult cases are rare, but regardless of the accusation, they are entitled to equal protection under the law. In the landmark Supreme Court decision Gideon v. Wainwright, Justice Hugo Black held that “the right of one charged with crime to counsel may not be deemed fundamental and essential to fair trials in some countries, but it is in ours.”

Thanks to the Sixth and 14th amendments of the U.S. Constitution, anyone accused of a crime in the United States has the constitutional right to an attorney. Guilt or innocence is immaterial to that right. There are some limitations, but it doesn’t cost anything to apply. Anyone can call our office and ask if they would qualify for a free attorney.

CP: Can you give some examples of how your job is different now than it was before 2020 and the COVID-19 pandemic? And can you say whether those changes are for the better or for the worse?

Sergent: A little of column A, a little of column B. The pandemic forced many jurisdictions to upgrade their technology to accommodate for video conferencing. If a client (or attorney, or victim or supportive family member) is ill, physically disabled, unable to drive, incarcerated in another county or other significant limitation to travel, they were able to appear and participate in court proceedings. The downside is that it’s still difficult to communicate with clients that are incarcerated in other jurisdictions and during court proceedings.

CP: What is something you've learned during your time as a public defender that you don't believe the public or policymakers fully recognize about the criminal justice system?

Sergent: Generally, that punitive, reactionary law will not prevent future criminal behavior. Whenever something particularly bad happens to someone, prosecutors and victim advocates rush to the legislature demanding mandatory sentences and strict supervision. Then that law is used to criminalize more people for things that it never intended to criminalize.

A good example is violation of a criminal protection order. Can that be serious? Absolutely. But one provision of that statute allows courts to issue protection orders for the protection of an alleged victim that exclude the possession of alcohol or drugs.

Then the criminal protection order prohibits that person from drinking alcohol or using marijuana. Fast forward one or two weeks and the same defendant is later arrested for violating the protection order. Not for having contact with the protected party, but because they bought a beer at a bar while hanging out with a friend. Thinking that it is a minor issue, a defendant could plead guilty to that violation of protection order and be sentenced to six to 24 months in jail.

I see more charges alleging a protection order violation because of an adult drinking a beer or consensual contact with the protected party than harassing, threatening or non-consensual contact.

If anything, the legislature should decrease the penalties for that charge unless the conduct is harassing, threatening or menacing.

CP: If law students — or perhaps even undergraduate or high school students — are thinking about becoming public defenders, what should they be asking themselves before making that career choice?

Sergent: First and foremost, ask yourself “why?” If it’s to get trial experience before going to a big law firm, to hopefully get your loans forgiven or to practice “both sides," then it’s not the best career choice. Being a public defender requires empathy, sacrifice, work ethic and a commitment to zealously advocate for individuals who may be struggling with mental health, poverty and/or governmental distrust.

It is not always easy, but it is fulfilling work. Prosecutors stand up in court and announce themselves as “district attorney so-and-so for the people of Colorado.” They do not stand for me when they are putting children behind bars and sending addicts to prison.

At the end of the day, I may not preventing all criminal behavior or restructuring the criminal justice system as a whole, but I am proud to say that we, as public defenders, actually represent the people — one person at a time.

Heading into a pivotal election year, there may not be a single person more pivotal to Colorado Senate Democrats' efforts to retain and expand…