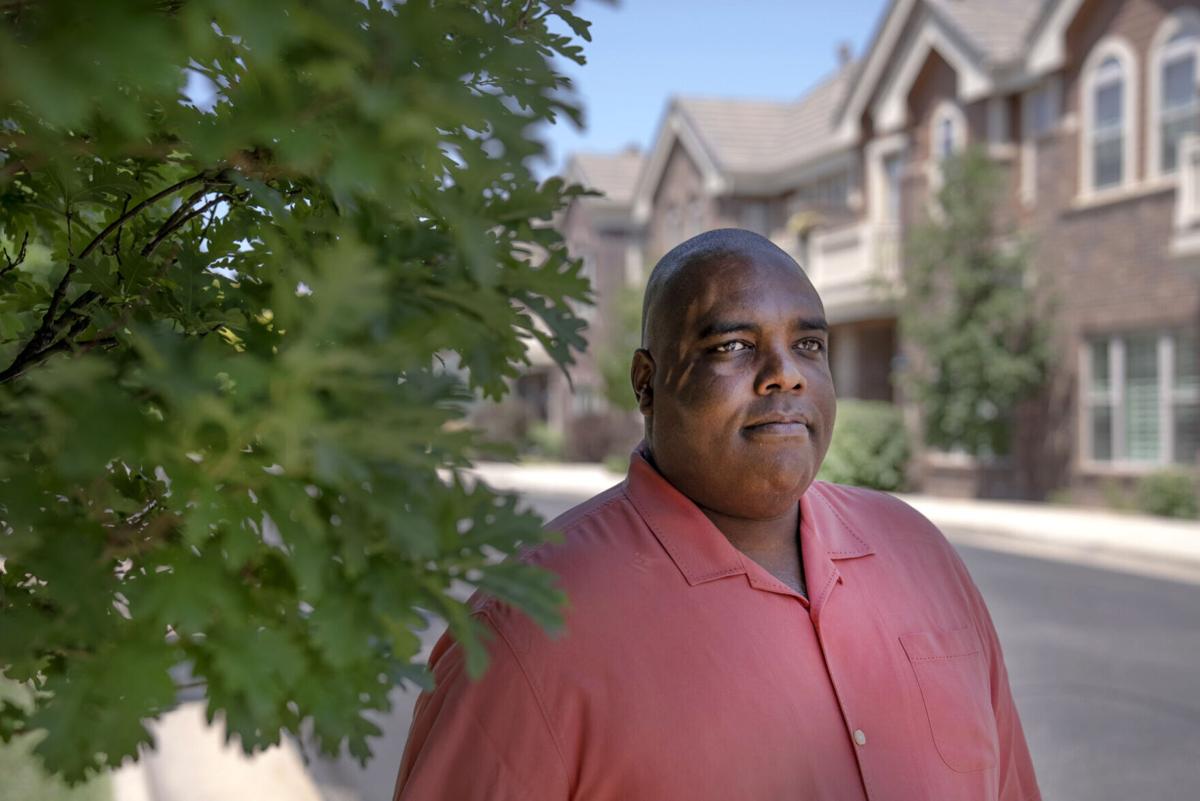 in Denver. Johnson lived in Denver before he was incarcerated in Cañon City. He continues to live in Denver after being released in October. 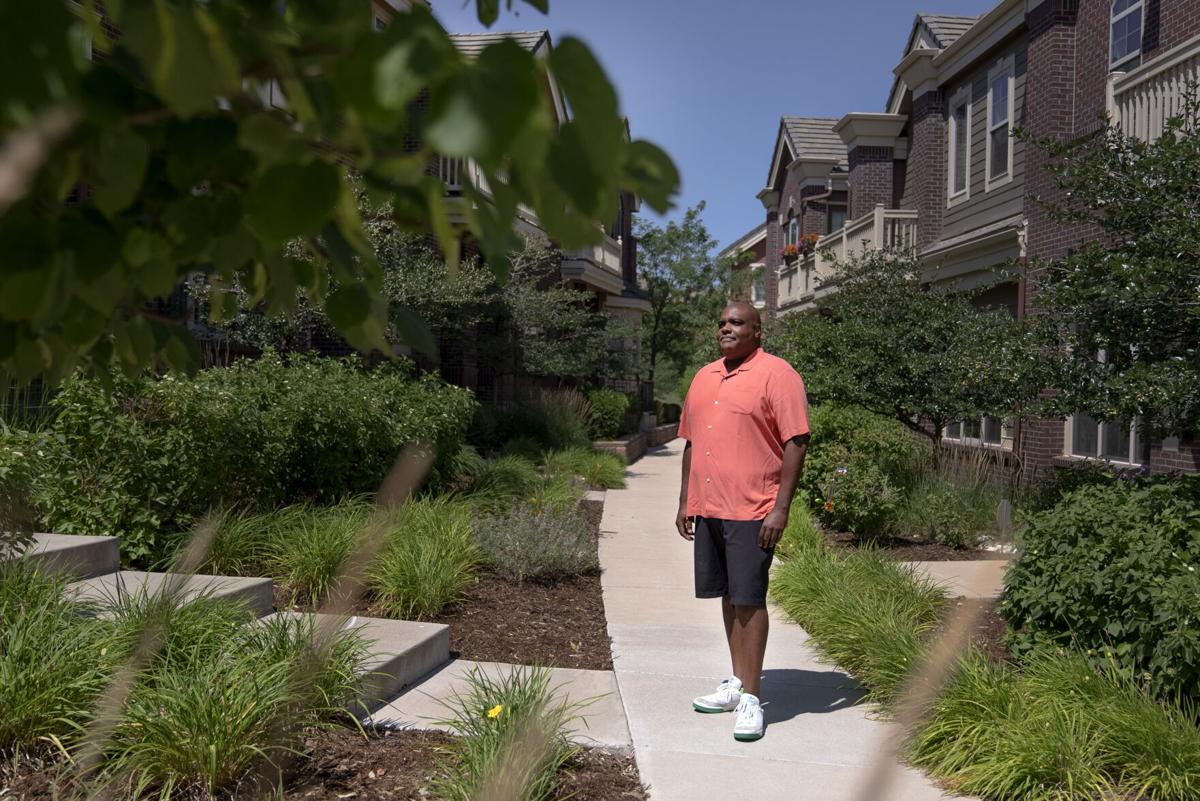 Robert Johnson, a Denver resident, poses for a portrait on Friday, July 30, 2021 in Denver, Colorado. Johnson lived in Denver before he was incarcerated in Canon City. He continues to live in Denver after being released in October of last year. (Katie Klann/The Gazette)

in Denver. Johnson lived in Denver before he was incarcerated in Cañon City. He continues to live in Denver after being released in October.

Robert Johnson, a Denver resident, poses for a portrait on Friday, July 30, 2021 in Denver, Colorado. Johnson lived in Denver before he was incarcerated in Canon City. He continues to live in Denver after being released in October of last year. (Katie Klann/The Gazette)

Robert Johnson lives in Denver. He’s lived in Denver since 2001, and he plans to live in Denver for the foreseeable future.

But on April 1, 2020, the date used by the U.S. Census Bureau to count where the entire U.S. population lives, Johnson wasn’t in Denver. He was at the Arrowhead Correctional Center, a state prison in Cañon City, about an hour’s drive southwest of Colorado Springs. He was there serving a three-year sentence for writing bad checks.

Johnson was released in October of 2020, one year into his sentence, with two years of parole, and while his incarceration in Cañon City lasted just one year, the timing of his sentence — overlapping with the census bureau’s count date — means that when the down-to-the-person count of the U.S. population is released August 12, Johnson will be counted in Fremont County, as a resident of the prison.

“My address of record is central Denver,” Johnson told The Gazette in an interview. He attended CU Boulder in the early 1990’s and moved back after living in Atlanta for about six years. “I love living here.”

Johnson lives with his girlfriend. His 13-year-old son spent the summer with them, and is now headed back to a boarding school in Tennessee. Johnson said he’s active in his community and he pays attention to what’s happening politically.

So when he heard about the topic of prisoner reallocation, he decided to get involved. At the commissions’ July public hearing in Englewood, Johnson told the commissioners about his experience, and said that he wanted to put a human face on the issue.

“I’m a pretty private person,” Johnson said, but he takes responsibility for his crime, and he knows sharing his story can help others, whether that means by dissuading them from committing crimes, or in this case helping people gain perspective.

“The more I thought about it, I realized the people there, in prison now, don’t have a voice,” Johnson said. “So I wanted to step up and talk about this.”

Johnson told the commissioners about his conviction and his sentence, and he asked for them to count him, for the purposes of drawing the next decade’s political maps, in Denver.

His story is one that’s shared with thousands of other Coloradans, who were incarcerated during the census count, but who think of some place other than the often remote areas where they’re imprisoned as home.

Historically, prisoners have been counted for districting purposes as residents of the location where they’re incarcerated. But a growing trend toward prison reform has brought with it the idea that perhaps prisoners should be counted where they lived before their incarceration.

Colorado’s legislators passed a law in 2020 instructing the newly approved independent redistricting commissions to in fact count the prisoners at their residence, not at the prison where they’re held. But because the state supreme court ruled earlier this year that lawmakers cannot pass new laws directing the redistricting commissions’ work, the law is seen by attorneys as unenforceable and moot.

Whether or not the commissions will add Colorado to the growing list of states that reallocate prisoners to their home residences is a decision they plan to make this upcoming week.

The census bureau has said they will release on August 12 — after months of delay — the official census data. The commissions used U.S. Census Bureau survey data from 2015-2019 to draw the preliminary draft maps, because of the delay in receiving census data caused by the global coronavirus pandemic. The commissions will have to quickly begin adjusting the preliminary draft maps using the official data, so the commissions’ staff has said a decision needs to be made imminently.

Amanda Gonzalez, the executive director of Colorado Common Cause, an advocacy group that focuses civil and political rights, along with Aleks Kajstura, the legal director for the Prison Policy Initiative, urged the redistricting commissioners in May to reallocate prisoners back to their home residences, despite challenges posed by the data.

Specifically, the census data will come this year with statistical noise added, called differential privacy, to maintain the privacy of individuals when looking at data for small areas. The differential privacy method is new, and the bureau has said it’s the most secure method, but the bureau has used other techniques in the past to slightly adjust the data to ensure privacy. But because this is the first time it’s being used, it’s unclear what it will look like to try to reallocate individual prisoners from a prison’s location to somewhere else.

The advocates argued that the reallocation is the right thing to do, because it means treating more equally the democratic rights of prisoners and ex-convicts.

“The proposed reallocation of correctional populations to their home addresses makes sure that incarcerated people are treated the same way in the redistricting data that other populations are that are housed similarly,” Kajstura said.

One commissioner, Bill Leone, a former U.S. attorney for Colorado, former member of the Colorado Independent Ethics Commission and one of the commission’s Republican members, has challenged the idea nearly every time it’s come up.

Leone has argued that the state lawmakers who represent areas with prisons do a great job also representing the prisoners. He’s also said that because prisons don’t simply empty out — more people get sentenced as others are released — the prisons should be counted as a static population, not a set of individuals whose residences should be reallocated one time. He’s also characterized the number of prisoners as so small — the commissions’ staff has estimated there are 14,000 inmates whose home residence can be determined —that the practical effect of reallocating them will be marginal and insignificant.

“Those are just three of the reasons I’ve brought up,” Leone told The Gazette. He’s made other arguments for why the commission shouldn’t reallocate prisoners.

One exchange during a commission hearing in July earned him rebuke from the Colorado Immigrant Rights Coalition, when he compared prisoners to illegal immigrants, and asked Christie Donner, the Colorado Criminal Justice Reform Coalition’s executive director, lobbyist and an advocate for the reallocation plan, whether they should be removed from the census count.

Donner told Leone she wouldn’t dignify the question with an answer, but generally rebutted Leone’s comparison to illegal immigrants, college students or other people living in a place only temporarily, by emphasizing volition. Prisoners don’t choose where they’re incarcerated, and they can be moved from one facility to another. College students choose where they live, even if it’s a temporary residence.

The primary issue for Donner, she said, is the dignity of prisoners.

Leone said he blames the decision to put prisons in far flung, remote areas of Colorado for the underlying problem. If a large portion of prisoners who lived in Denver prior to their sentencing were incarcerated in Denver, Leone said he thinks the issue wouldn’t even be raised.

More than anything else, Leone told The Gazette, “I don’t want to set this precedent.”

The commissions should take the census data, as it’s provided, and draw districts based on the numbers in the data, he said.

Leone said he thinks the desire to reallocate prisoners is part of a movement to reform the criminal justice system.

“I think we probably over-incarcerate people,” he said, but an effort to handle prisoners’ civil rights differently is a policy matter.

“It’s ideological. It’s social. It’s political,” he said. “My view of the commissions is this: We are not lawmakers. We shouldn't be trying to import political views into the process.”

Leone said he thinks that if the commission decides to reallocate prisoners to their home addresses during this redistricting, then the practice will stick.

Commissioner Blanca O’Leary, a Democrat on the legislative redistricting commission, has said she will support the reallocation proposal. Like Leone, she also thinks that what the commission decides this time will likely become the standard practice.

“There is a matter of basic decency and fairness here,” she said, summarizing her support for the idea, “and because we are the first fully independent commission, the decisions will not only last 10 years, but they could also set precedent for future commissions.”

O’Leary said she admired Johnson for sharing his experience, especially given the stigma for people convicted of felonies.

“He admitted he did wrong, he took responsibility,” she said.

And she thinks his testimony will likely influence the commissions’ decision: “The other commissioners were very engaged. They asked a lot of questions.”

The commissions have slated the topic for meetings this week, and their staff have told them that they need to vote on what to do by Friday.

Colorado's next legislative map will count prisoners at their homes, not where they're jailed

Colorado's legislative redistricting commissioners voted Friday to reallocate prisoners for the next decade's state House and Senate districts, meaning they'll be counted at their home residence and not where they were jailed during the census.