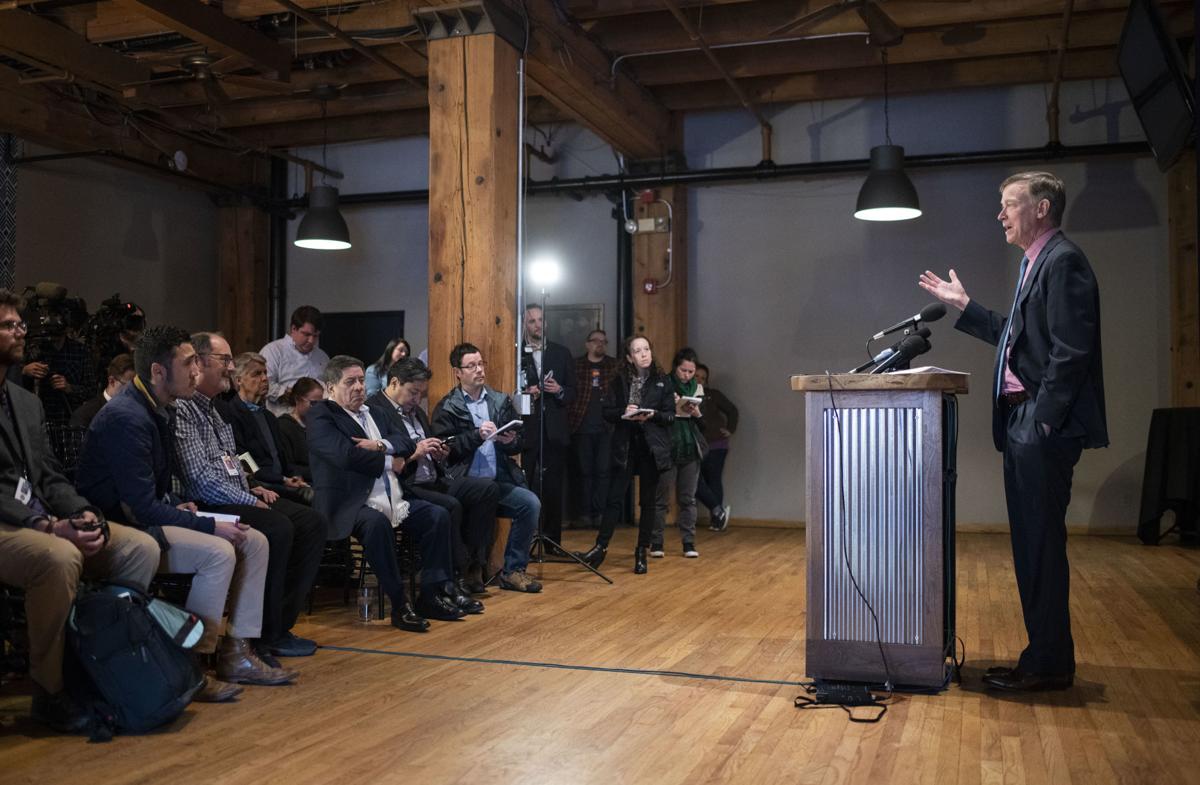 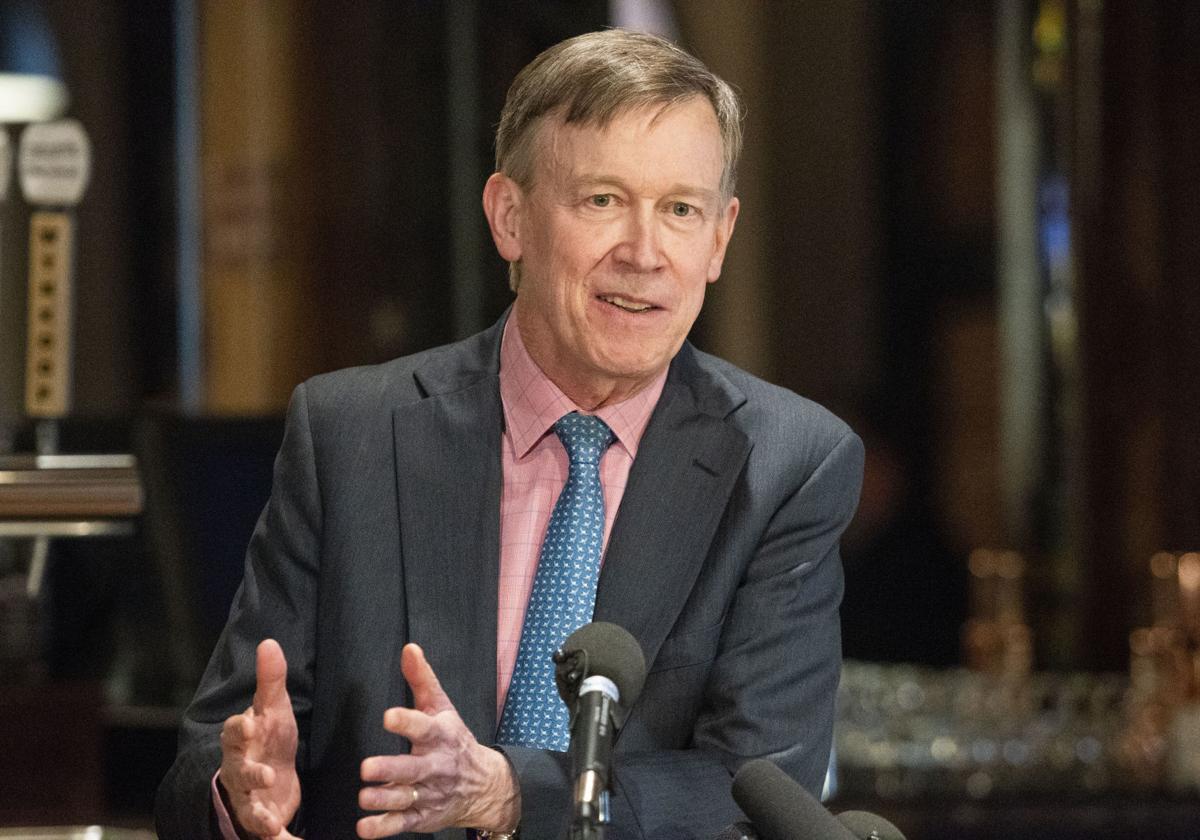 When John Hickenlooper pitched his freshly minted candidacy for president on the national stage this week, he led with his record of accomplishment in Colorado, where the Democrat served two terms as governor, vowing to take his trademark brand of deal-making to the White House.

"That sense of being able to bring people together and get things done," he told reporters Wednesday at a press conference at the Wynkoop Brewing Co. in Denver. "Not just talk about them, not just blame someone or point fingers, but really figure out how do you get things done."

"I think those accomplishments reflect something about an approach that has real merit in America today," he said. "I'm running for president of the United States because I think we're in a crisis, a crisis of division. We're not going to be able to address challenges like health care, gun safety, unless we put down our weapons and come together and do a lot of what we've been able to do in Colorado."

His presidential campaign will test the proposition that there's a thirst for a non-ideological consensus-builder from a divided state in a primary field crowded with partisan warriors, mostly hailing from the gridlocked U.S. Senate.

Boasting a resume that features what The Atlantic calls "the most Colorado trifecta of jobs imaginable: mayor of Denver, geologist, and brewery owner," Hickenlooper honed his conversational skills as head barkeep at the Wynkoop, the state's first modern brewpub, which he founded with partners in 1988, helping kick off a national boom.

He is perhaps the quintessential candidate a voter might want to have a beer with.

The approach is as central to Hickenlooper's brand as his quirks, like a reluctance to wear neckties and a penchant for the kind of rambling tales that might be told around a campfire. Since his first mayoral campaign 16 years ago, Hickenlooper has been preaching the gospel of active listening.

It's how he proposes busting the partisan logjam that has paralyzed Washington, D.C., frustrating politicians and angering voters.

Hickenlooper told George Stephanopoulos of "Good Morning America" that he plans to overcome obstacles thrown up by Senate Republican Leader Mitch McConnell (assuming the GOP keeps control of the Senate in 2021) the same way he brought together suburban mayors to support a metro-area transit plan.

"Just like anybody, people are responsive to people that they think respect them, and they feel heard," Hickenlooper said. "I learned this in the restaurant business. When someone's angry, you don't fight back on them and argue with them. You repeat back their words.

"Mitch McConnell, by God, when I come into office, I would go to Mitch McConnell — to his office — and I would sit down with him and say, 'What is the issue again?' And we would talk, and I would continue to speak back to him. Sounds silly, right? But this works. This is what I did with the suburban mayors, and they hated the city of Denver."

As Stephanopoulos cocked a skeptical eyebrow, Hickenlooper added: "We're the one place where this has gotten done, and I think it will work in Washington."

The reviews have not been kind.

"I wish that were true. It’s not," wrote MSNBC's Steve Benen about Hickenlooper's comment on dealing with McConnell. "That may be a description of how the process should work, but to understand contemporary politics at the federal level is to realize that the fantasy isn’t real."

"Negotiations with Senate Majority Leader Mitch McConnell are not couples counseling, and optimism is not a plan," wrote The Week's Joel Mathis.

Assessed The Washington Post's Paul Waldman: "To hear [Hickenlooper] talk, it’s as though he parachuted in from a few decades ago and has no idea how politics works in 2019 or what sorts of impediments the next Democratic president is going to face."

"I used to naively believe that. And then Mitch McConnell made it his life's work to deny Obama re-election and block everything we did," said Tommy Vietor, a former advisor to President Obama, on the "Pod Save America" podcast.

At his Wednesday press conference, Hickenlooper chuckled when a reporter asked whether his approach was realistic.

"I'm not sure anybody can do that with Mitch McConnell. That was an example," he said. "But I think the first thing you do is you go talk to anybody."

Then he detailed several instances when he did just that, bringing opponents together to forge solutions.

"Will that work with Mitch McConnell? I don't know. But I think the response to my comment is a reflection of what's wrong with Washington. It's why we've got gridlock in Washington right now and why, to a large extent, we look at — almost weekly — potential shutdowns.

"But ultimately, you have to start with that sense, that belief in the goodness in people, and that if you work hard enough, you can begin to build some level of trust. And once you get a level of trust, you can collaborate. We try to collaborate at the speed of trust."

A few hours earlier in Washington, D.C., a reporter asked McConnell why he doesn't plan to allow senators to vote on an election reform bill that went on to be passed March 8 by the Democratic-controlled House of Representatives.

"Because I get to decide what we vote on," the Republican said.

Maybe someone should offer to have a beer with him?

The line got some of the biggest laughs of the night.

“Barack Obama and Mitch McConnell had shared a bottle of whiskey once, and McConnell went out and stole a Supreme Court seat from him.”

Speaking to curious Iowans, the former Colorado governor hammered on a theme of collaboration with those on the other side of the political aisle.