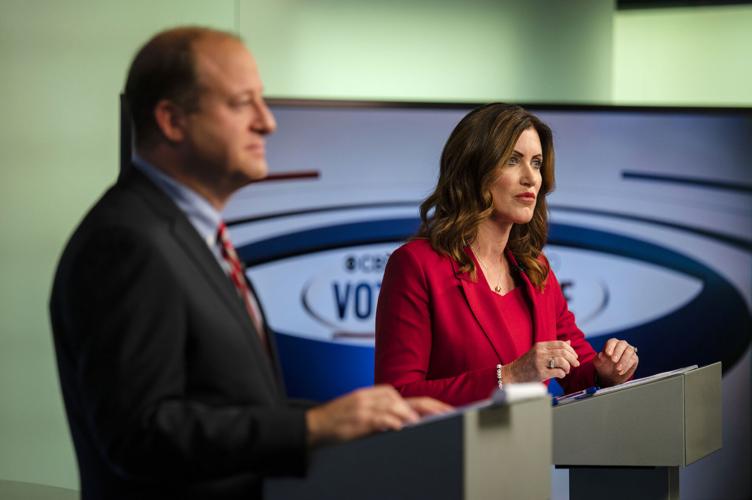 Republican gubernatorial candidate and University of Colorado Regent Heidi Ganahl, right, responds to a question during a debate with Gov. Jared Polis, a Democrat, Oct. 13, 2022, in Denver. 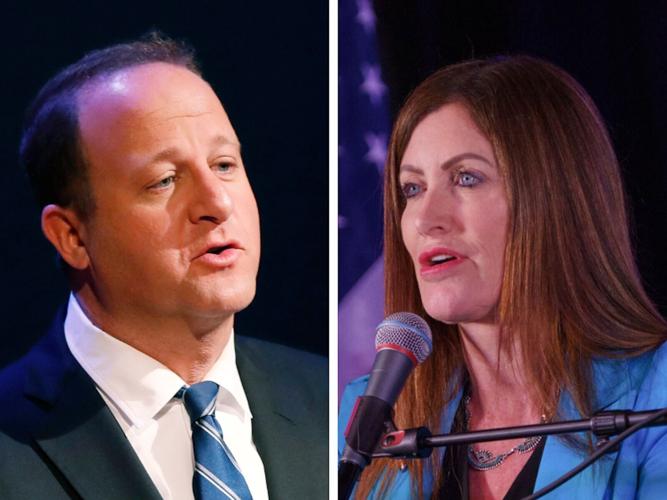 Republican gubernatorial candidate and University of Colorado Regent Heidi Ganahl, right, responds to a question during a debate with Gov. Jared Polis, a Democrat, Oct. 13, 2022, in Denver.

Colorado's Democratic Gov. Jared Polis and his Republican challenger, Heidi Ganahl, clashed on a host of issues including inflation, the state budget, housing policy and public safety on Thursday night in Denver in their second debate, held just days before ballots go out to state voters.

Throughout the fast-paced, hourlong televised debate, Polis touted his record and maintained that he's the candidate best equipped to tackle the state's problems, while Ganahl blamed the incumbent for Colorado's position high atop national rankings for inflation, crime and fentanyl deaths and accused Polis of seeking reelection to "fix the problems that he's created."

A former five-term U.S. representative from the 2nd Congressional District, Polis is seeking a second term. Ganahl, a member of the University of Colorado Board of Regents, is the only Republican holding statewide office. Both are wealthy entrepreneurs.

The debate, sponsored by CBS4-Denver and The Colorado Sun, often grew heated, with the candidates talking over one another.

"Her answer to every question is 'Jared Polis, Jared Polis,'" the governor said during one testy exchange.

“It is," she responded. "Polis is the problem here."

Later, after Polis asked whether his opponent would be a "reality-based governor" — citing her association with an anti-vaccination activist and selection of a running mate who declared that the 2020 election was stolen from former President Donald Trump — Ganahl shot back, “I know what a spoiled brat acts like, and you are a spoiled brat.”

They also discussed the issues.

Saying he relies on data to drive decisions, "learning from what works and what doesn't work in other states and across the world," Polis painted a brighter picture of the state's situation.

"I have a vision for moving Colorado forward, for saving people money, for cutting reducing fees and taxes and working together to make Colorado one of the 10 safest states," he said. "If this was easy, it would have been done already."

Ganahl hammered Polis with statistics and pledged to "fully fund" law enforcement," though Polis accused her of proposing a budget plan that would cut funding for the State Patrol and require drastic cuts across the board for state services.

"Public safety will be my No. 1 priority," Ganahl said, adding that she intends to replace the state's parole board and the heads of public safety departments. She also pledged to make it a felony to possess any amount of fentanyl, a synthetic opioid responsible for a growing epidemic of overdose deaths in recent years.

Polis said her proposal was the wrong approach.

“You show me a penalty that increases safety and decreases crime, we’re for it,” he said. “If it makes us less safe, I’m against it." He added that he believes it takes a multipronged approach to deal with residents who have addiction and substance abuse problems.

Discussing the economy, Polis boasted that he's worked to reduce fees and helped deliver tax-refund checks to residents earlier than they would have received them, though Ganahl noted that many of the fee reductions were a temporary stay on fees he signed into law and lambasted Polis for his opposition to the state constitutional amendment that yielded the tax refunds.

While both have said they they want to cut the state's income tax rate, Ganahl has made it a centerpiece of her campaign to bring it to zero in two terms, including by instituting a hiring freeze, cutting state spending every year, and asking voters to convert a multitude of fees and other charges into taxes. Ganahl didn't say how she would proceed if voters shot down the offer, instead insisting that once voters understand the situation, they'll comply.

Polis has proposed replacing the state's income tax with a tax on pollution in an attempt to curb greenhouse gases.

Addressing a question about climate policy, Ganahl called Polis' goal of reaching zero emissions for the state within decades as moving "too far, too fast" and proposed expanding the state's oil and gas industry, citing the state's large reserves and reputation for producing fossil fuels more cleanly than elsewhere in the world.

A vocal supporter of abortion rights, Polis, who earlier this year signed a bill to guarantee abortion and access to contraception virtually without limits, said he wants to see the wording of a proposal by abortion-rights advocates to reverse a state constitutional ban on funding for the procedure before committing to support it but said he would be open to it. He noted that when he was in Congress, he voted against the Hyde Amendment, which prohibits spending federal dollars on abortion.

Ganahl, who opposes abortion except in cases of rape, incest and when the mother's life is endangered, has called the law signed by Polis "radical" and vowed to "rip it up" if elected governor. But during the debate, she said she'll send any "substantial changes to the abortion law" to voters rather than sign legislation restricting abortion.

The candidates meet for a third time on Sunday in Colorado Springs at a debate sponsored by The Gazette, Colorado Politics, KOAA and the El Pomar Foundation's Forum for Civic Advancement. The debate will be livestreamed starting at 6 p.m. at gazette.com, denvergazette.com, coloradopolitics.com and koaa.com. The full broadcast will air on KOAA at 5:30 p.m. Wednesday, Oct. 19.

Last week, Ganahl declined an invitation to participate in an Oct. 27 debate in Fort Collins sponsored by 9News, Colorado Politics, the Denver Gazette and several local TV stations around the state, saying she objected to 9News' coverage of her contention that Colorado school children who identify as cats are disrupting learning across the state.

It's the first time a major party gubernatorial candidate has skipped the 9News debate in nearly 30 years, the station said.

Republicans are hoping to end a drought in major statewide races this year in Colorado, where the GOP hasn't notched a statewide win since 2014.