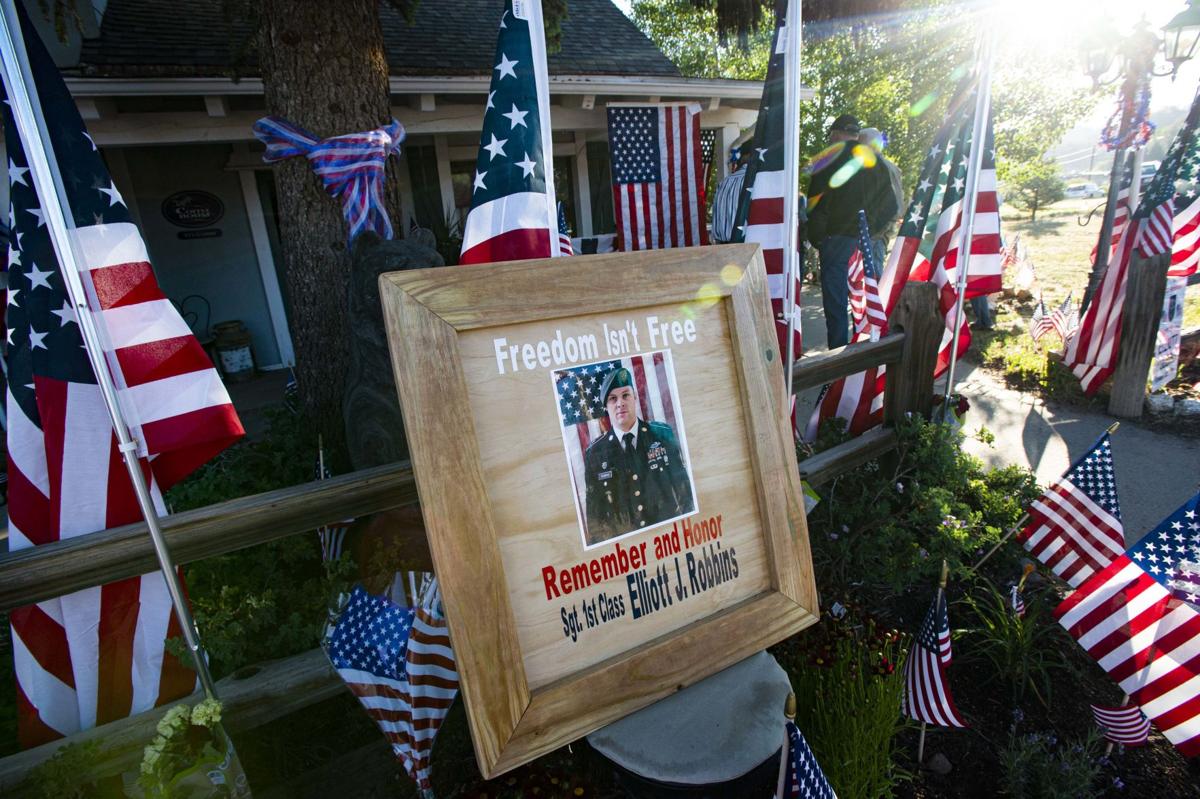 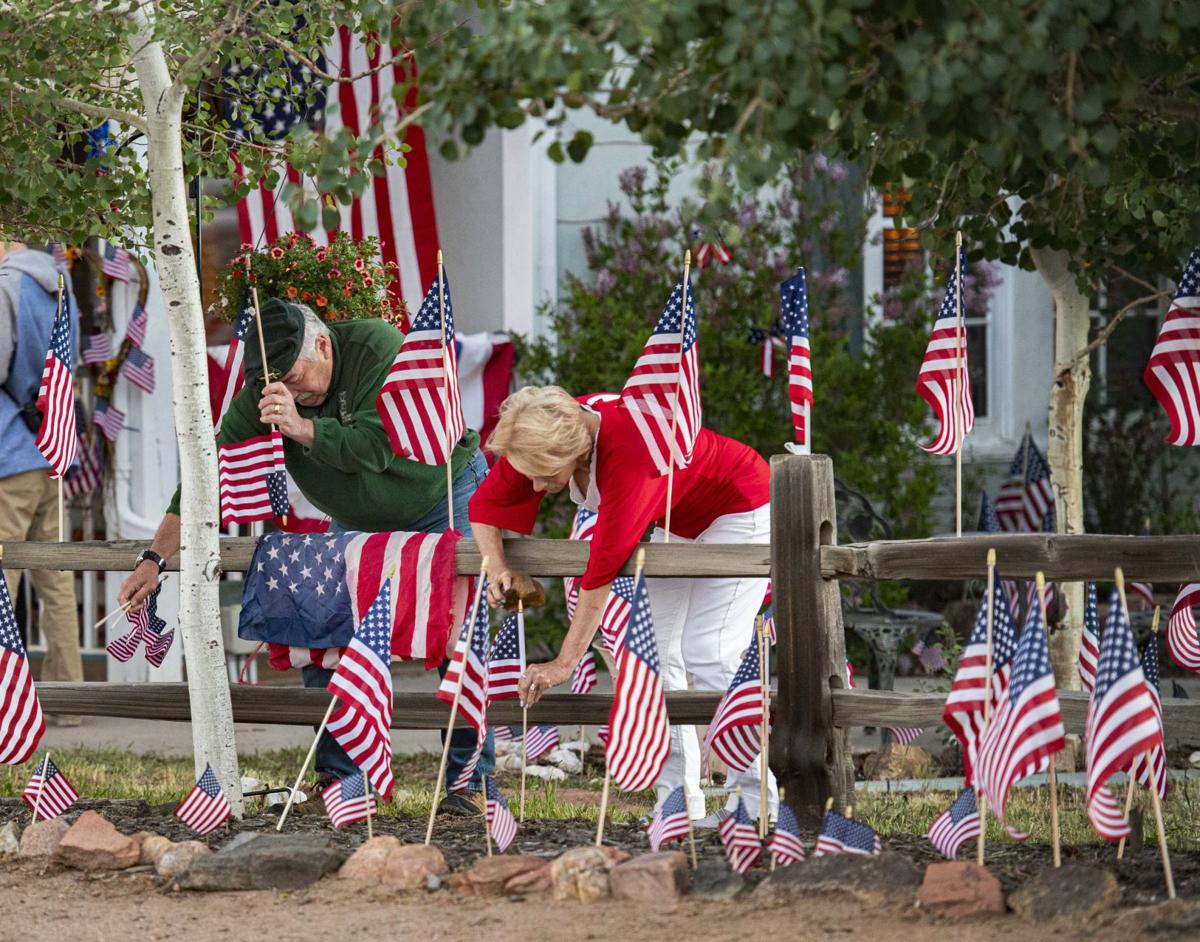 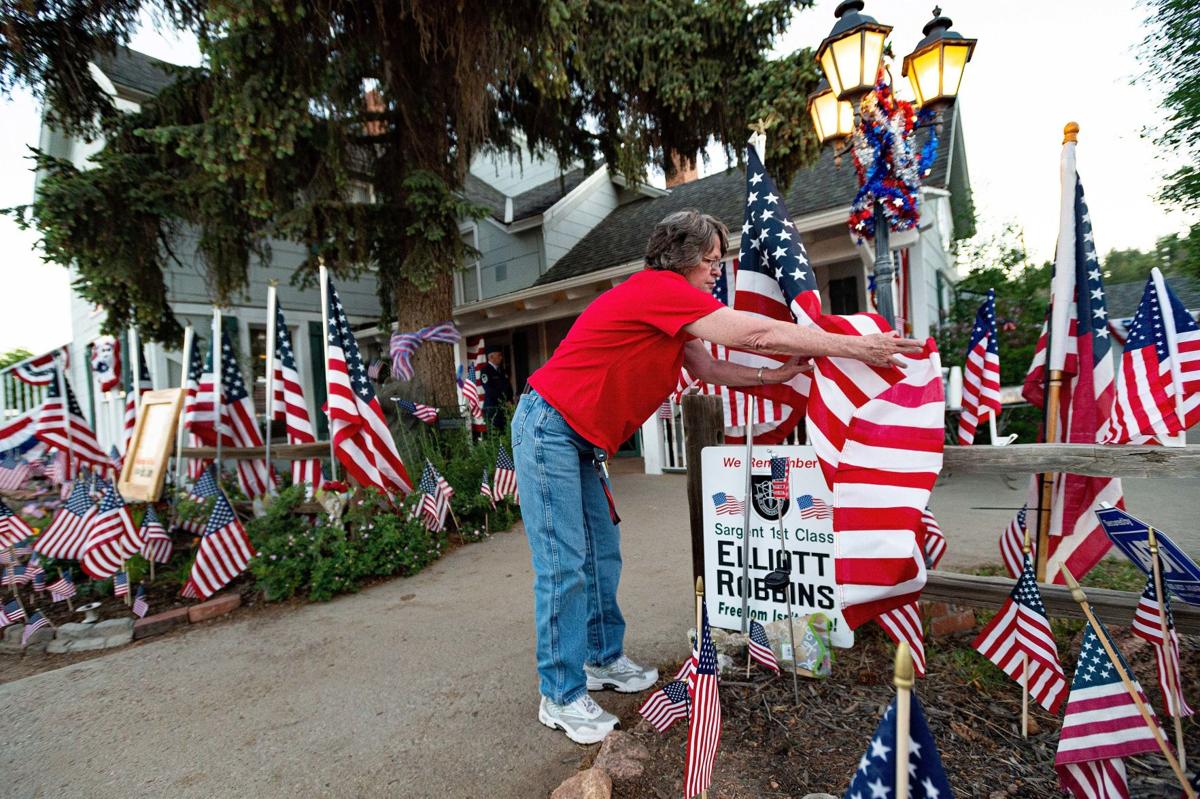 Florissant resident Fawn Batista places a U.S. flag next to a sign she and her husband, Rich, had made to remember Sgt. 1st Class Elliott J. Robbins Thursday outside the Costello Street Coffee House in Florissant. 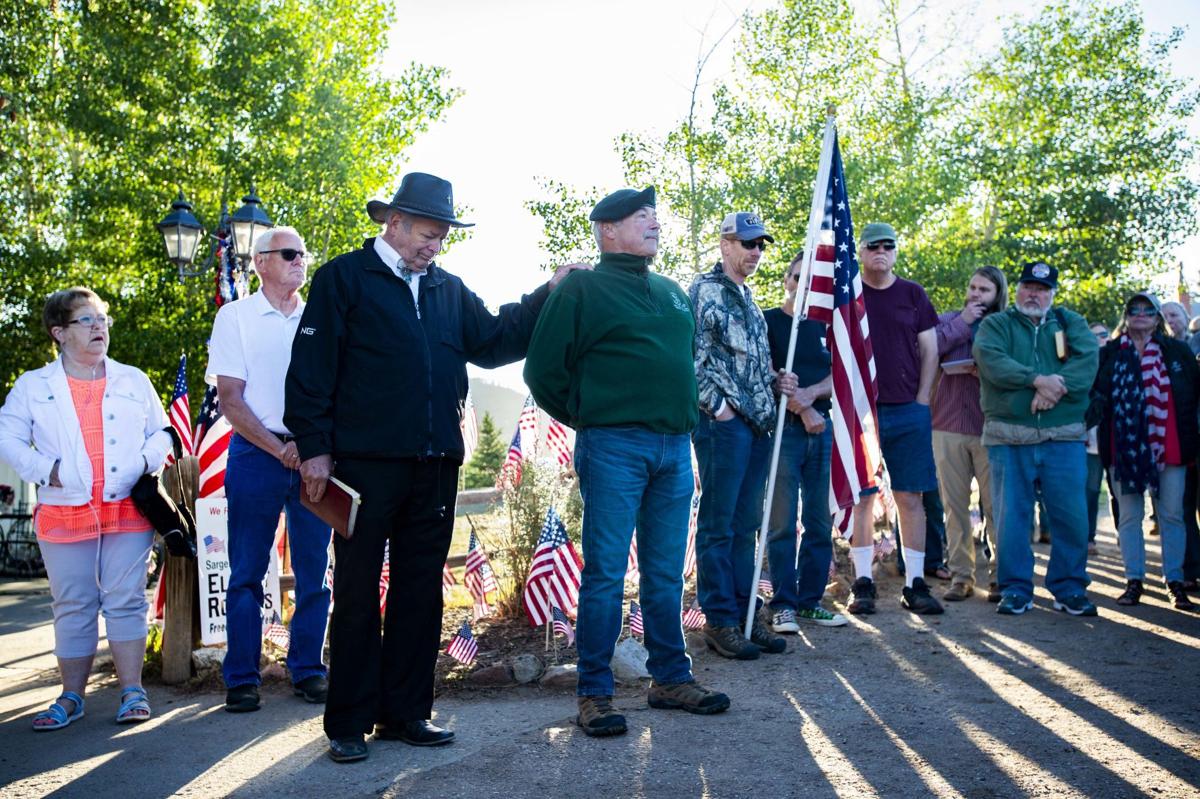 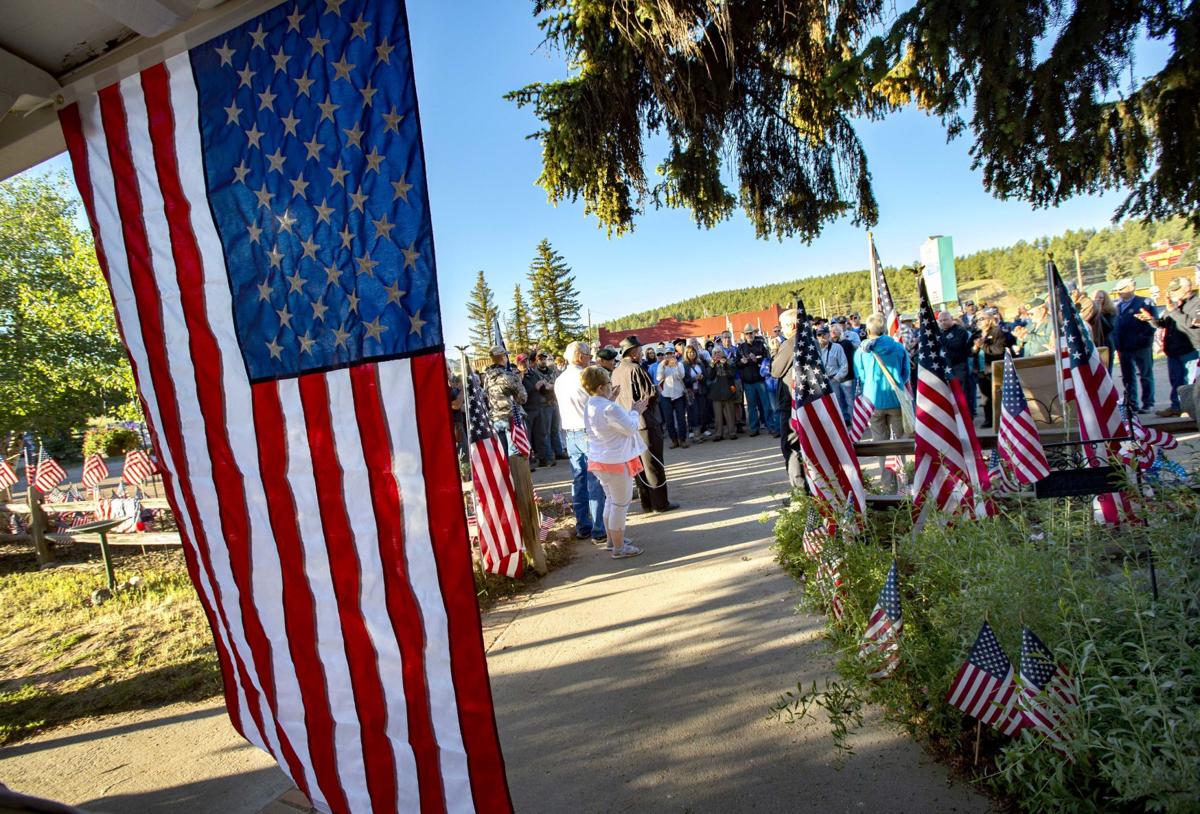 More than 200 people gather outside the Costello Street Coffee House in Florissant before it opened Thursday morning to pay tribute to Robbins.

Florissant resident Fawn Batista places a U.S. flag next to a sign she and her husband, Rich, had made to remember Sgt. 1st Class Elliott J. Robbins Thursday outside the Costello Street Coffee House in Florissant.

More than 200 people gather outside the Costello Street Coffee House in Florissant before it opened Thursday morning to pay tribute to Robbins.

FLORISSANT • It was in the middle of the night, a time that seemed like the sun would never rise on Independence Day, when Vickie Robbins came home to this outpost of Teller County, as good a place as any to start the American dream.

The coffee shop was still here at the crossroads — the business she and her husband bought a year and a half ago, months before meeting their firstborn, little Elliott.

But now in Thursday’s midnight hours, home was changed forever.

Husband and father were gone, along with another soldier.

Sgt. 1st Class Elliott J. Robbins had perished in Afghanistan. He was 31.

Word around Florissant spread that the Army had come to Vickie’s door to deliver the news late Sunday. And while she was away from Colorado to grieve with family, word then spread around the valley about how neighbors could rally around her and the 6-month-old baby upon their return.

So it was Thursday that a crowd emerged outside the Costello Street Coffee House. Before the sun broke over the mountains, more than 200 friends and strangers had gathered to write cards and pray and hug.

The shop’s lawn had been freshly mowed and adorned with American flags. And the flags lined the road, too, along with cars and motorcycles. There was hardly any room to park in the no-stoplight town.

“On behalf of Vickie, we can’t thank you enough for the love and support,” the shop’s general manager, Harold Perry, told the crowd. “This is more than overwhelming.”

Too overwhelming at the moment for Vickie, he said. But “she’s aware of what’s going on, and she loves you guys.”

This was the kind of community the Robbinses had in mind when they decided to settle here. He’d been assigned to Fort Carson’s 10th Special Forces Group in 2016, his latest stop since enlisting as an infantryman out of high school in 2006. And while he and Vickie envisioned a family, they also considered life after the Army: a home and business of their own.

They found the historic building at the crossroads, the community meeting place warmly-lit with a carpeted, antique dining room like you’d find at grandma’s. They would keep locals’ breakfast and lunch favorites, but they also thought to expand with dinner.

“There’s a lot of retirees here; there’s not a lot of young couples that just come in and establish a business,” said one regular, Sandi Boehr. “So people were just delighted. They were delighted with (the Robbinses’) energy and charisma.”

Elliott was the bright, smiling face that greeted them, the one striking up conversation. Of course, there was a stern, regimented side. One of the first hires, 17-year-old Ryan Clare, learned the expectations on Day 1.

“You, come with me,” Clare recalls Robbins instructing.

“And he’s like this big, military guy. So we go to the back room, and he sits me down and tells me how it’s gonna be and gives me a pep talk. It was interesting. But after that, I realized he was really sweet.”

So sweet as to send a text to Boehr, still a relative stranger, on a very special day: the birth of his son.

It was December. The next month, he deployed.

He was to come home in August, friends and customers understood.

“He was looking forward to coming home and raising his son,” Annemarie Egli said, wiping tears. “That’s what makes the heart break all the more.”

She helped organize Thursday’s memorial alongside Boehr, a fellow military wife. One of the first to plant flags was Don Barton, a retiree of the 10th Special Forces Group, a Green Beret before Robbins. He and his wife have been mentors to the young couple.

“My wife cried,” Barton said, recalling the moment they learned of their friend’s fate. As for Barton? He looked down at a reporter’s notebook. “Whatever you put in there, my guys are gonna see. You know, we’re strong, we’re solid. But we’re human beings.”

Times have been especially tough on his unit. Before Robbins, fellow 10th Group soldier Master Sgt. Michael B. Riley died in a June 25 firefight in Afghanistan.

At one point during his speech, he pardoned himself. He couldn’t help but cry.

Then he started again:

“Make sure when you talk to people ... it’s not the Fourth of July, it’s Independence Day, it’s our country. And if there’s anything our country needs today, it’s to come together.”

And to that, the crowd said amen.

The new top general at Fort Carson said that in nearly 30 years in the Army, he has come to prioritize “continuing to learn at every level.”