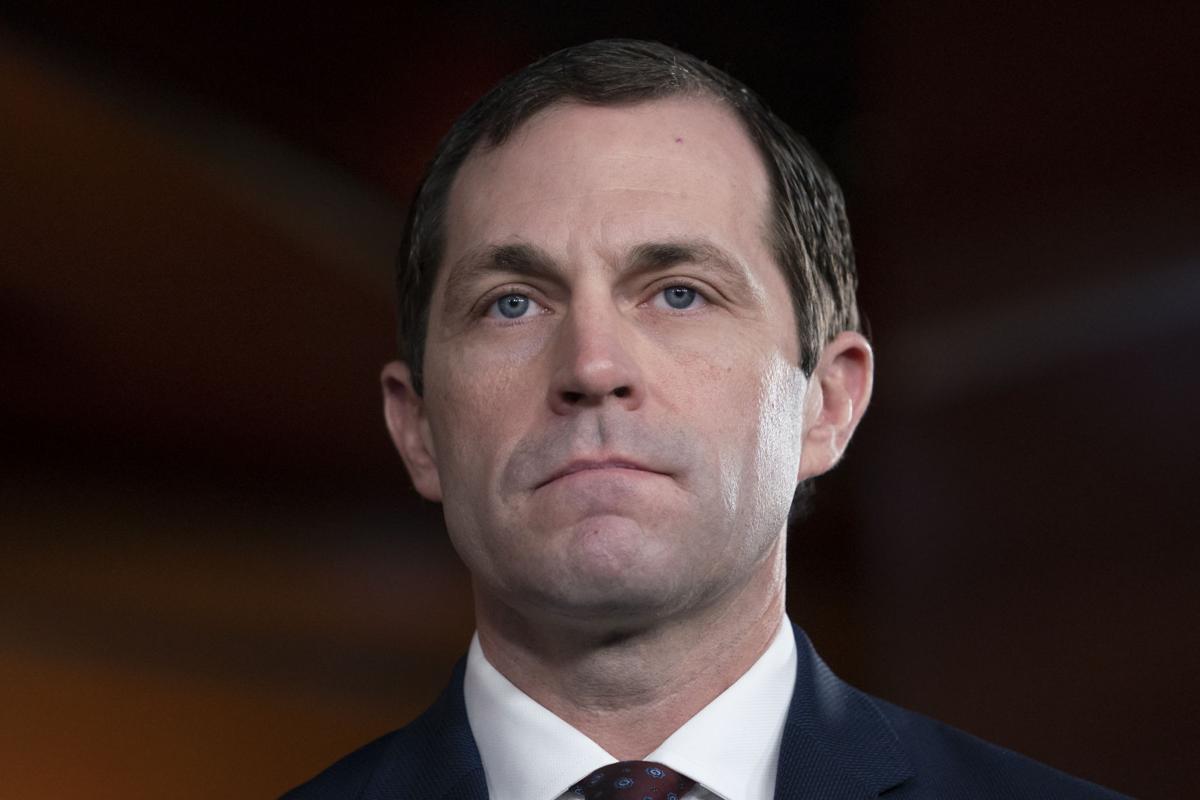 Rep. Jason Crow, D-Colo., stands with House Speaker Nancy Pelosi of Calif., as she announces her impeachment managers at the Capitol in Washington on Wednesday, Jan. 15, 2020. 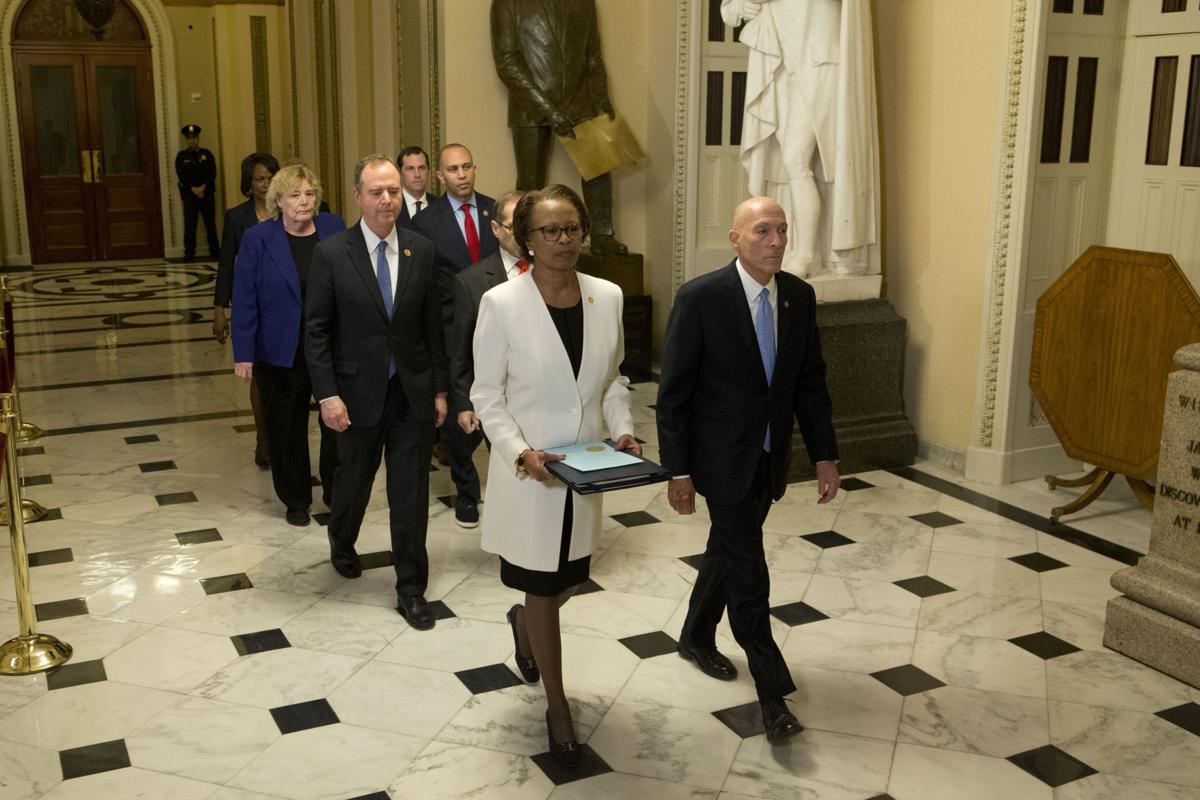 Rep. Jason Crow, D-Colo., stands with House Speaker Nancy Pelosi of Calif., as she announces her impeachment managers at the Capitol in Washington on Wednesday, Jan. 15, 2020.

Jason Crow, an Aurora Democrat serving his first term in Congress, is one of seven House members named Wednesday by House Speaker Nancy Pelosi to prosecute articles of impeachment charging President Donald Trump with abusing his power and obstructing Congress.

Hours after the House voted to send the charges to the Senate, Crow and the other members of the prosecution team — known as "managers" — walked the impeachment articles across the Capitol to deliver the documents to the secretary of the Senate, setting in motion only the third time in American history a president has been impeached.

At the same time, the attorney and decorated Army Ranger combat veteran stepped into the spotlight as a central player in proceedings bound to consume a sharply divided nation in an election year.

“As an impeachment manager, I will approach the process with the dignity and seriousness that it deserves, and advocate for a full and fair trial," Crow said. "It’s my solemn responsibility to lay out the facts and give the Senate — and the American people — confidence in the process. It is the duty of Congress to protect the rule-of-law and hold the President accountable. Our democracy depends on it.”

The managers are led by House Intelligence Committee Chairman Adam Schiff of California, who led the impeachment inquiry, and House Judiciary Chair Rep. Jerrold Nadler of New York, whose committee drafted and approved the impeachment articles. The others are Reps. Hakeem Jeffries of New York, Sylvia Garcia of Texas, Val Demings of Florida, and Zoe Lofgren of California.

Crow's selection came as something of a surprise, since unlike the other managers, he doesn't sit on any of the committees that investigated and prepared the impeachment articles, and he doesn't have experience as a prosecutor. But Crow was among a group of freshman Democrats who called on Congress in September to investigate revelations about Trump, saying they raised national security concerns.

The seven lawmakers with military and national security backgrounds wound up sparking the impeachment inquiry when they wrote in an op-ed that would be an "impeachable offense" if Trump pressured a foreign government to investigate a political rival.

Colorado's Crow: If Trump-Ukraine allegations are true, it's an 'impeachable offense'

"If these allegations are true, we believe these actions represent an impeachable offense," the lawmakers wrote. "We do not arrive at this conclusion lightly, and we call on our colleagues in Congress to consider the use of all congressional authorities available to us, including the power of 'inherent contempt' and impeachment hearings, to address these new allegations, find the truth and protect our national security."

Pelosi opened the impeachment inquiry the next day.

Crow, who defeated five-term Republican Mike Coffman in the suburban 6th Congressional District in 2018, didn't support impeachment during his campaign, saying that he wanted to see more information before deciding.

He joined other Democrats supporting an impeachment inquiry in late July.

In December, after weeks of testimony but before the House voted on the impeachment articles, Crow told constituents at a town hall in Aurora that he'd decided to vote to impeach Trump.

"I did not come to Congress to do this, but if we don't do it now, then when will we?" he said, drawing a standing ovation from the crowd.

Democrat Jason Crow says he will vote to impeach Trump

"I'm proud to support this incredible team of lawmakers appointed by @SpeakerPelosi to defend our democracy in the Senate, including my good friend @RepJasonCrow," tweeted U.S. Rep. Joe Neguse, a Lafayette Democrat and a member of the Judiciary Committee. "The American people deserve a fair and transparent trial, I hope the Senate will deliver."

“With the appointment of Congressman Crow, Colorado will continue to play a leading role in the impeachment investigation and trial of President Trump – an issue important to Coloradans. As a combat veteran and deep understanding of the law, Congressman Crow has a unique understanding of the gravity of Donald Trump’s actions which are a continuing threat to our national security and our democracy," Perlmutter told Colorado Politics in a statement.

Kristi Burton Brown, the vice chairman of the Colorado Republican Party, has led rallies outside Crow's office protesting his support for impeachment.

On Wednesday, she tweeted: "@RepJasonCrow is siding with the extreme wing of his party by taking on the job of impeachment manager. The moderate voters in CD6 won’t look kindly on yet another distraction from the issues Crow *should* be focused on."

“In being handpicked by Pelosi to become one of only a handful of ‘impeachment managers,’ it has become clear that Jason Crow is a Washington insider who is far more aligned with the extreme left than the values of hard working Colorado families," said Steve House, one of the Republicans running in a primary for the chance to challenge Crow in this year's election.

“Coloradans deserve a fulltime congressman, not one that treats their needs like a part-time job so he can focus his full attention on politicizing the attempted removal of a duly elected president.”

At 40, Crow is the youngest of the impeachment managers, and he's the only one who didn't support Pelosi's election as speaker when Democrats took the majority in the House after the 2018 election.

Although he served on a state veterans commission and spoke at the 2012 Democratic National Convention, Crow was mostly a newcomer to politics when he launched his congressional campaign nearly three years ago.

With a law degree from the University of Denver, the married father of two had recently been made a partner at law firm Holland and Hart, where he practiced business law, mostly advising companies how to comply with regulations.

On Wednesday, Crow, who served three combat tours in Iraq and Afghanistan and was awarded the Bronze Star, referenced his background in the military in a statement about his appointment as an impeachment manager.

“I love our country and what it represents both at home and around the world," he said.

"My time in military service taught me that our democracy exists because men and women stand up to fight for it. It’s a belief that drove me to serve my country in combat and led me to the halls of Congress. While there is no map for the challenges we face, my oath to support and defend the Constitution has guided me for years, and will continue to guide me during this trial.