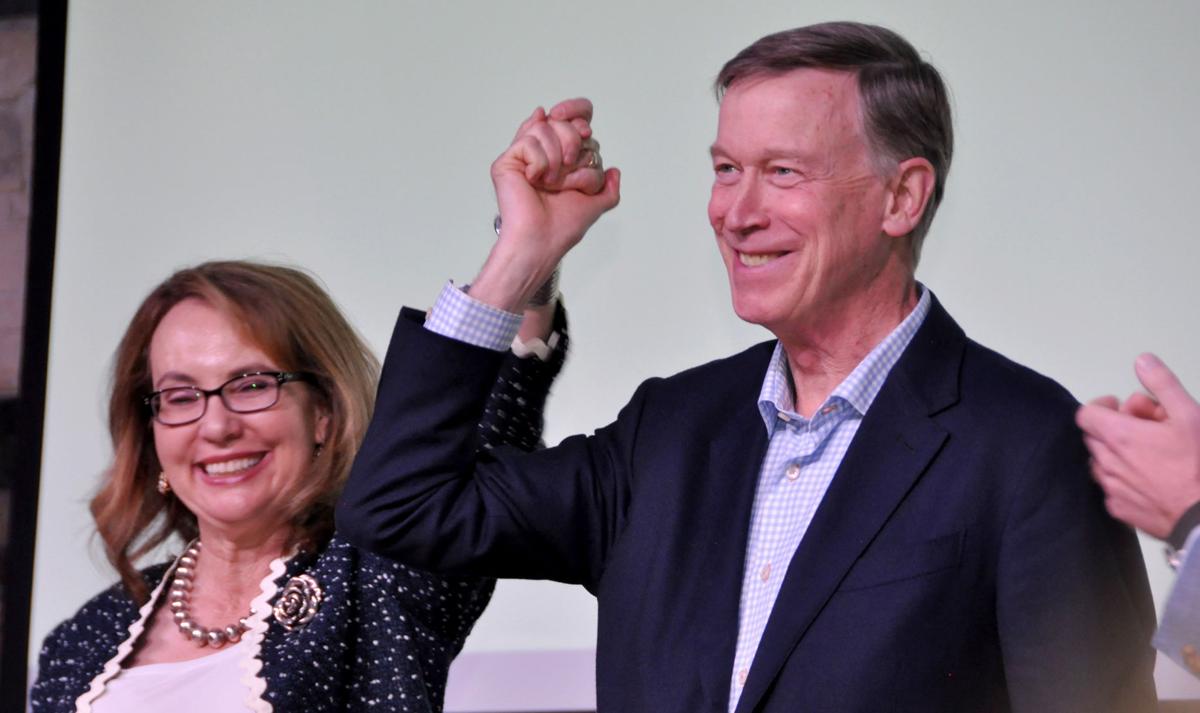 Former Rep. Gabby Giffords of Arizona, who survived an assassination attempt in 2011, joins hands with former Colorado Gov. John Hickenlooper, right, a Democratic Senate candidate, at an event with gun violence prevention advocates where she endorsed him on Monday, March 9, 2020, at Heritage Christian Center in Aurora. 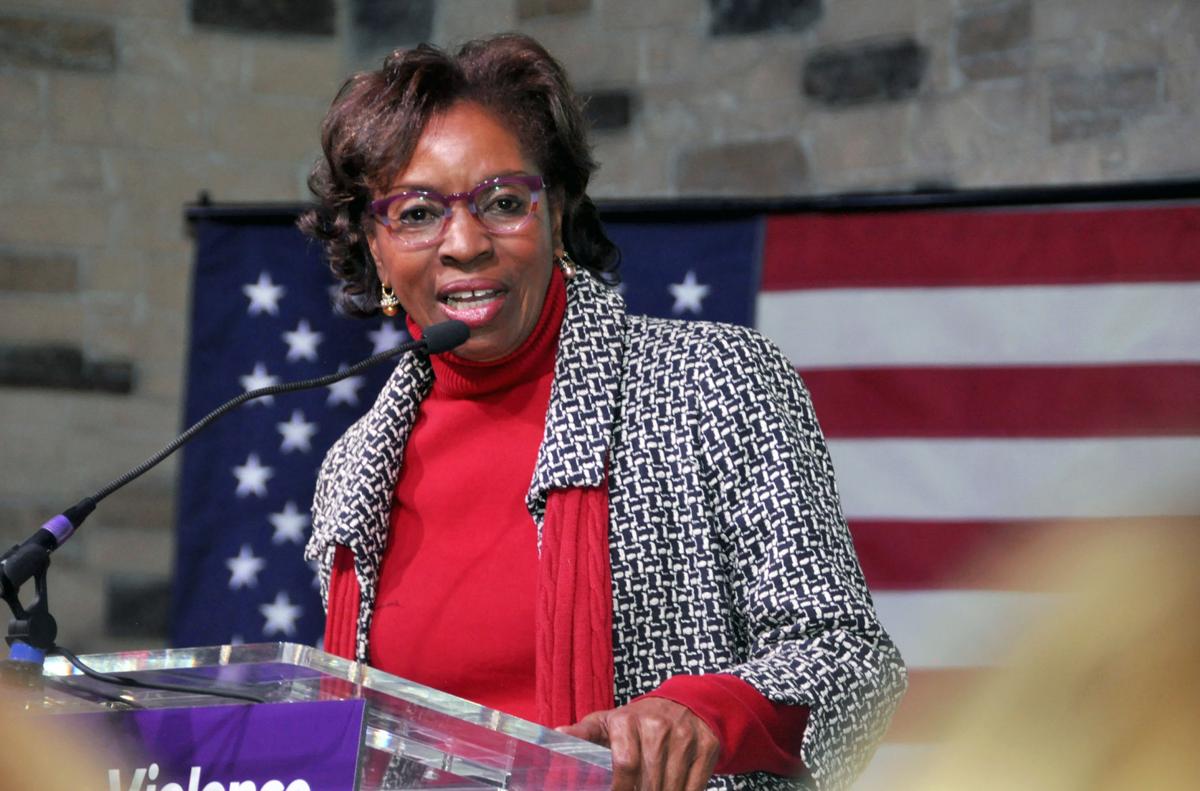 State Sen. Rhonda Fields, D-Aurora, whose son and his fiancé were killed in a shooting, describes the mood at the Colorado Capitol in 2013 when she sponsored a controversial package of gun-control legislation, during an event featuring former U.S. Rep. Gabby Giffords of Arizona on Monday, March 9, 2020, at Heritage Christian Center in Aurora. 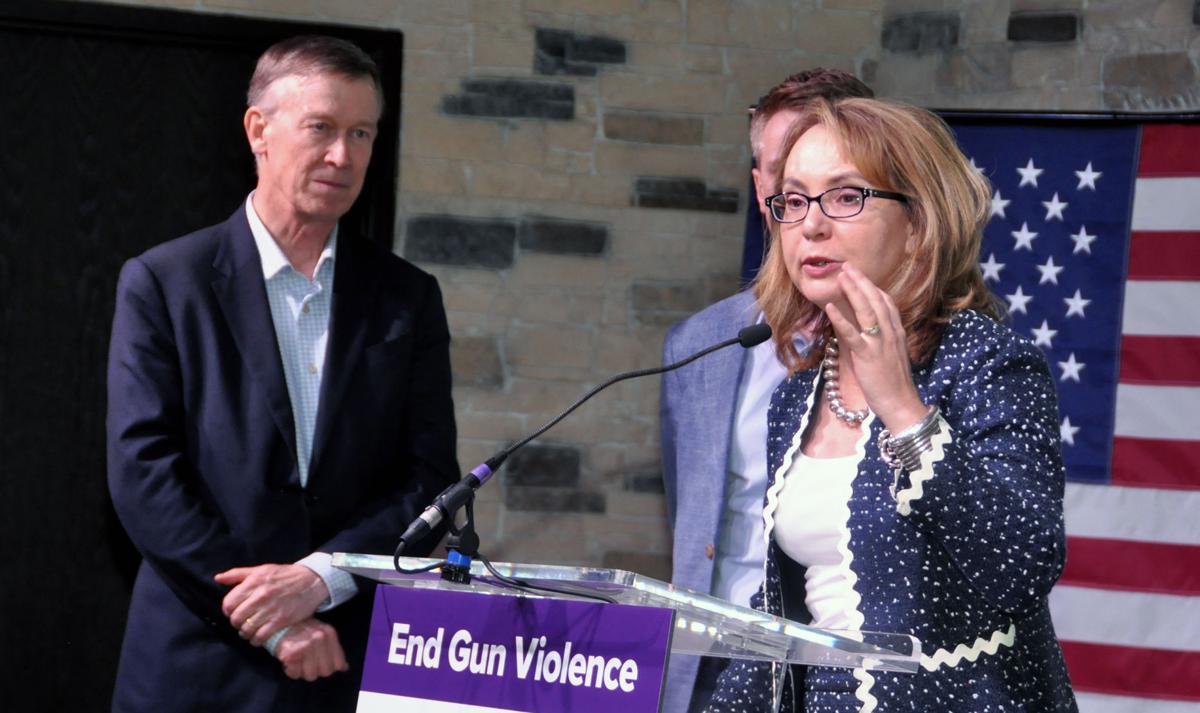 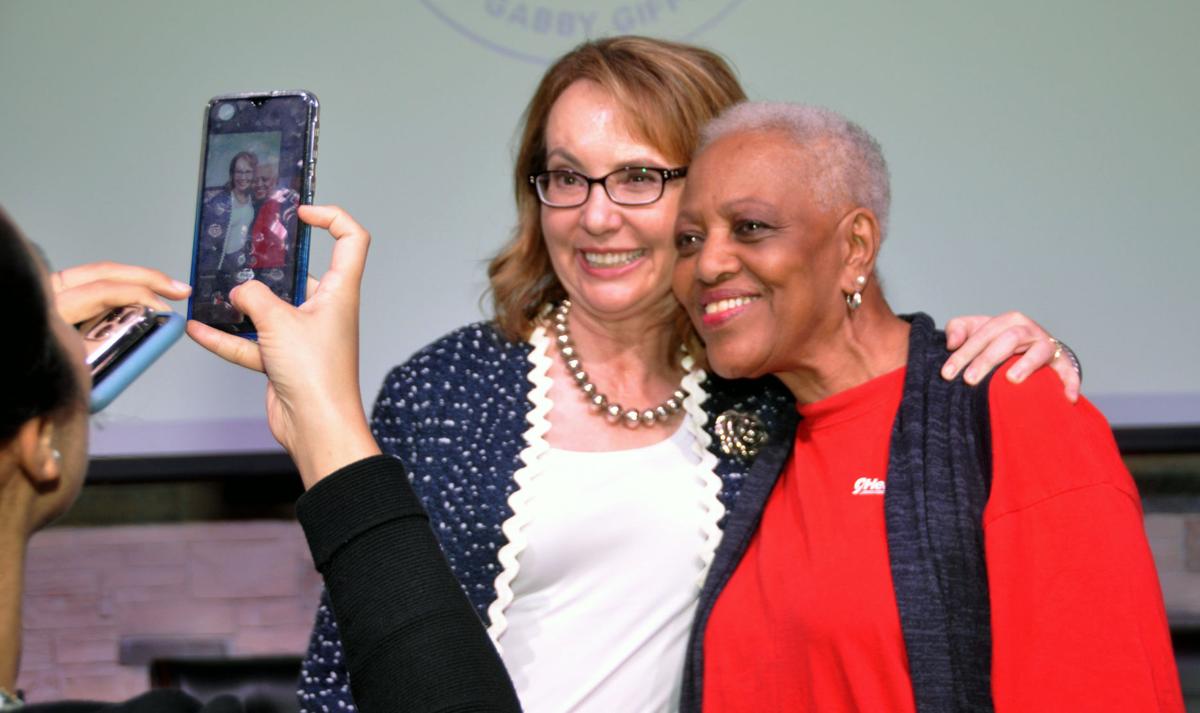 Former Rep. Gabby Giffords of Arizona, center, who survived an assassination attempt in 2011, poses for a photograph with Aurora resident Janet Wilson at an event with gun violence prevention advocates on Monday, March 9, 2020, at Heritage Christian Cener in Aurora. 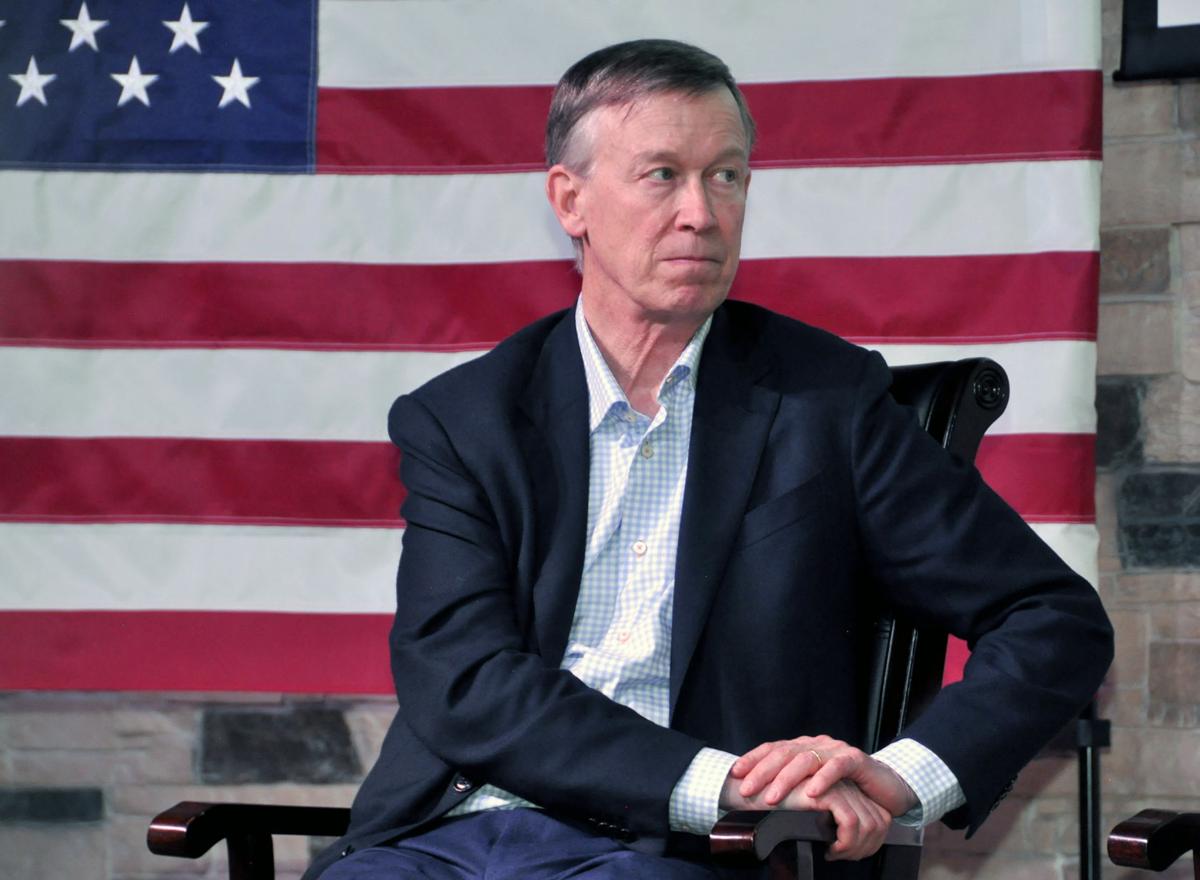 Former Rep. Gabby Giffords of Arizona, who survived an assassination attempt in 2011, joins hands with former Colorado Gov. John Hickenlooper, right, a Democratic Senate candidate, at an event with gun violence prevention advocates where she endorsed him on Monday, March 9, 2020, at Heritage Christian Center in Aurora.

State Sen. Rhonda Fields, D-Aurora, whose son and his fiancé were killed in a shooting, describes the mood at the Colorado Capitol in 2013 when she sponsored a controversial package of gun-control legislation, during an event featuring former U.S. Rep. Gabby Giffords of Arizona on Monday, March 9, 2020, at Heritage Christian Center in Aurora.

Former Rep. Gabby Giffords of Arizona, center, who survived an assassination attempt in 2011, poses for a photograph with Aurora resident Janet Wilson at an event with gun violence prevention advocates on Monday, March 9, 2020, at Heritage Christian Cener in Aurora.

Gabby Giffords and the gun-control advocacy group she co-founded endorsed Democrat John Hickenlooper in Colorado's U.S. Senate race on Monday, saying the former governor "stood up to the gun lobby" in the wake of mass shootings in Aurora and Newtown, Connecticut.

Hickenlooper appeared with the former Arizona congresswoman, a shooting survivor, at Heritage Christian Center in Aurora, a stone's throw from the movie theater where a 2012 shooting left 12 dead and 70 wounded.

"It's time to stand up for what's right. It's time for courage. We must stop gun violence," Giffords told the crowd. "Make our country a safer place, a better place. Do you have the courage to fight? Join your voice with mine."

In a statement, Giffords contrasted Hickenlooper to the Republican incumbent he's hoping to unseat, U.S. Sen. Cory Gardner, whose campaigns have been supported by nearly $4 million in spending by the National Rifle Association, according to one estimate.

"Hickenlooper chose courage and stood up to the gun lobby because lives were on the line," she said. "Gardner decided that campaign contributions from the NRA were more important than finding solutions that would address the gun violence epidemic."

Giffords was one of 19 people shot in 2011 at a constituent-outreach event outside a grocery store in Tucson in an attack that left six dead. She founded the nonprofit along with her husband, combat veteran and retired astronaut Capt. Mark Kelly, who is challenging Republican U.S. Sen. Martha McSally in Arizona.

Hickenlooper, one of nine Democrats running in Colorado's Senate primary, said one reason he wants to go to Washington is to help pass universal background checks for firearms sales, a policy he said is supported by 90% of gun owners.

"Yet Cory Gardner and Mitch McConnell still do not believe that it has the merit and deserves the opportunity to be heard on the floor of he Senate," he said, referencing the Senate Republican leader's opposition to a bill passed last year by the Democratic-controlled House.

"That first step will be universal background checks, but we're not going to stop there," Hickenlooper said. "I think that we want to close what we sometimes call the 'Gardner loopholes,' because they're all together."

He listed other elements of his gun-control agenda, including banning assault-style weapons, limiting the size of ammunition magazines, boost enforcement against illegal gun traffickers and stopping so-called "ghost guns," weapons that don't have registration numbers.

"The dysfunction in Washington and the bitter partisanship have prevented anything from getting done," Hickenlooper said. "We should not allow ourselves to be held hostage to that kind of dysfunction."

Others who spoke at the rally delivered a similar message.

"I am so over thoughts and prayers coming after the fact," said Marlon Saunders, senior pastor at the church. "I am committed on my part to be the change we wish to see in our community."

State Sen. Rhonda Fields, D-Aurora, who entered politics after her son, Javad Marshall-Fields, and his fiancée, Vivian Wolfe, were shot to death days before Marshall-Fields was set to testify in a murder trial, recalled the gun bills signed by Hickenlooper.

"I'm so proud of the work we did in Colorado," she said. "It was not an easy time. We did it, and the governor signed it."

In 2013, Hickenlooper signed legislation to require background checks and ban high-capacity magazines. Two Democratic state senators lost their seats in recalls sparked by the 2013 legislation, and a third stepped down in the face of a threatened recall.

John Morse, one of the senators who was recalled, questioned the former governor's role in the legislation last summer, when Hickenlooper was considering ending his presidential campaign and jumping into the Senate race, saying he "felt it important to set the record straight."

"In 2013, (the legislature) passed gun safety laws in spite of @Hickenlooper NOT because of him," Morse tweeted, adding that credit for the bills should go to Fields, former state Sen. Morgan Carroll and others.

It's a different version of the story than Morse told a year ago, when he called Hickenlooper's approach "thoughtful and nuanced," telling Colorado Public Radio that Hickenlooper's "greatest strength is his absolute commitment to bring people from every viewpoint together to try to address a problem."

"Confronted by critics at a meeting of county sheriffs, Hickenlooper blamed his staff for committing him to sign a ban on high-capacity magazines," said Romanoff, who was no longer serving in the legislature in 2013. "Hickenlooper then told the sheriffs he never expected the bill to pass — and suggested he might not have signed it if he’d known it would cause so much 'commotion.' "

Romanoff was referencing a recording of Hickenlooper appearing to distance himself from the controversial magazine limit in a private meeting with sheriffs.

Calling it "a bewildering performance," Romanoff added, "it makes you wonder whether he’d wobble even more in Washington."

Peter Ambler, executive director of the Giffords political group, on Monday said Hickenlooper was "the first purple state governor to take on the NRA and win."

"Even though the politics were tough, Gov. Hickenlooper stood up," he said.

The group spent close to $750,000 last summer on ads calling on Gardner to support the federal background check legislation.

The Suicide Training and Awareness Nationally Delivered for Universal Prevention Act of 2019, a Gardner bill that is stalled in the Senate, promotes mental health awareness grants meant to prevent suicides. He co-sponsored another bill that was signed into law in 2018, the STOP School Violence Act, that reauthorized school safety grants.

Giffords' visit on Monday to Colorado — including a meeting with gun violence survivors at the Butterfly Pavilion in Westminster earlier in the day — was her fourth trip to the metro area in recent years.

She held a rally last summer in Aurora with Democratic members of Colorado's congressional delegation to support gun measures and returned a month later to campaign for Aurora mayoral candidate Omar Montgomery. In 2018, she met with voters to boost U.S. Rep. Jason Crow's bid to win a seat in Congress.

The endorsements come two days after gun safety champion Gabby Giffords, a former Arizona congresswoman and shooting survivor, backed Hickenlooper at a rally in Aurora near the movie theater where Sullivan's son Alex was killed in a 2012 mass shooting.