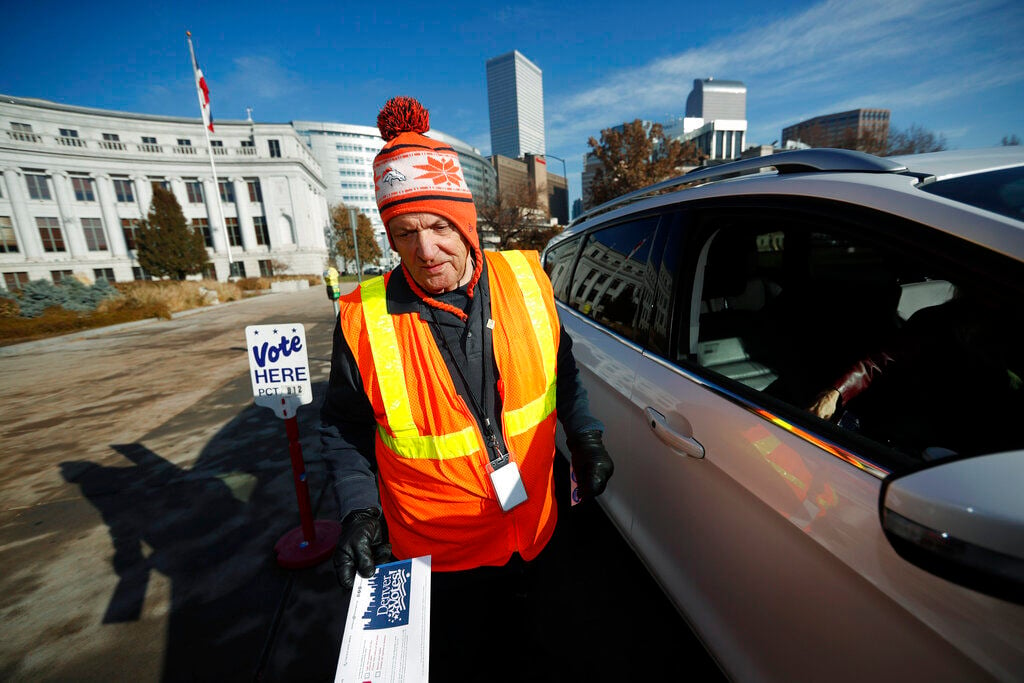 Election judge Adam Ballinger takes a ballot from a voter at the drive-through site of the Denver Election Division outside the City/County Building early Tuesday, Nov. 5, 2019, in Denver. 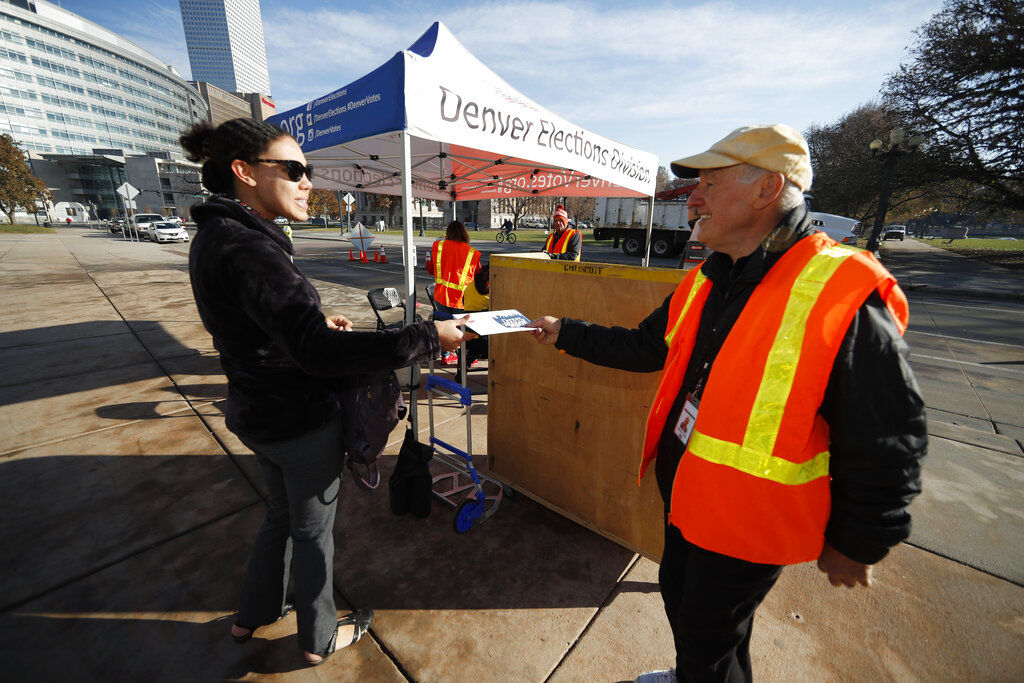 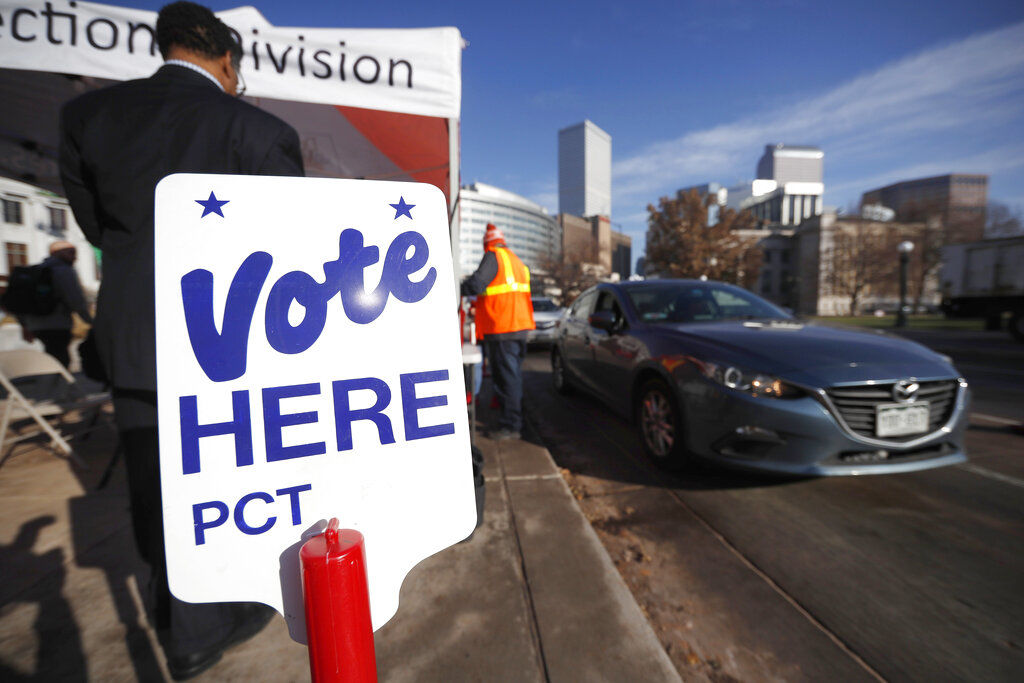 A sign marks the lane for motorists to drop off ballots at the drive-through site of the Denver Election Division outside the City/County Building early Tuesday, Nov. 5, 2019, in downtown Denver. 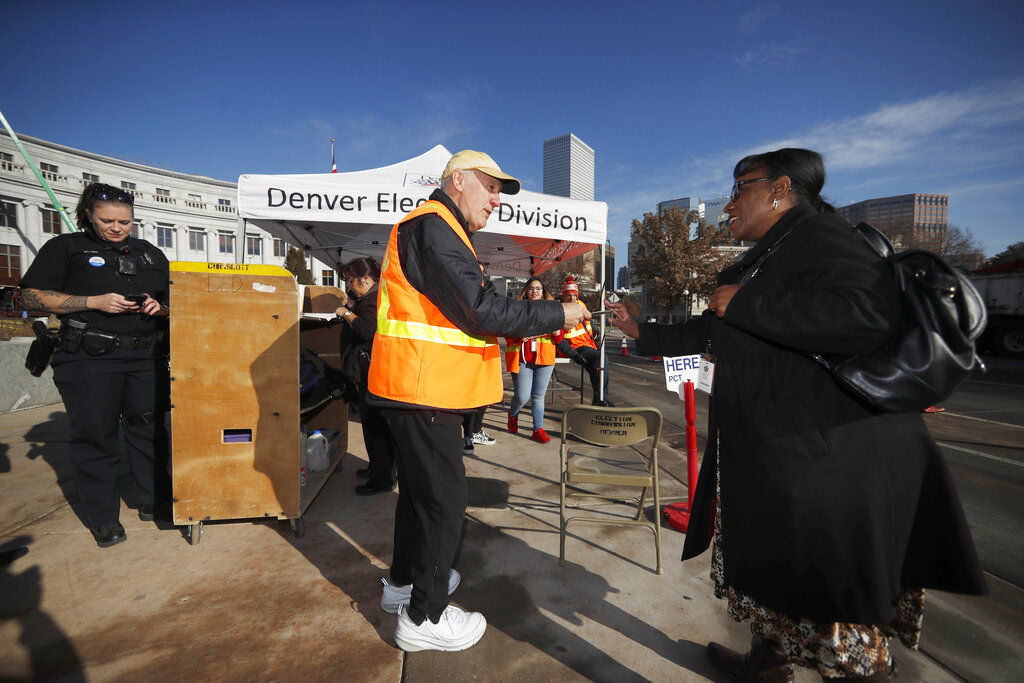 Election judge Michael Michalek, center, takes a ballot from a voter at the pick-up site of the Denver Election Division outside the City/County Building early Tuesday, Nov. 5, 2019, in Denver.

Election judge Adam Ballinger takes a ballot from a voter at the drive-through site of the Denver Election Division outside the City/County Building early Tuesday, Nov. 5, 2019, in Denver.

A sign marks the lane for motorists to drop off ballots at the drive-through site of the Denver Election Division outside the City/County Building early Tuesday, Nov. 5, 2019, in downtown Denver.

Election judge Michael Michalek, center, takes a ballot from a voter at the pick-up site of the Denver Election Division outside the City/County Building early Tuesday, Nov. 5, 2019, in Denver.

As of Wednesday morning, Denver voters appear to have overwhelmingly supported the passing of Referred Questions 2A, 2B, 2C and 2D.

Mayor Michael Hancock thanked voters in a statement Tuesday night for passing Referred Question 2A, which will transform the Department of Public Works into a new department of transportation.

Creating the Department of Transportation and Infrastructure is key to the mayor’s Mobility Action Plan, his office said in a statement to Colorado Politics on Wednesday.

The new department will be “better aligned to achieve the goals laid out in the plan,” spokesman Michael Strott said.

“By passing 2A and transforming the Department of Public Works into a Department of Transportation and Infrastructure, Denver voters tonight took an important step towards modernizing mobility in Denver,” Hancock said in a statement Tuesday. “The department will now be better equipped to address our neighborhoods’ mobility needs, reduce congestion and take on the gaps in our transit system.”

“The new charter language better articulates our department’s responsibility for developing multimodal transportation networks, gives us the ability to complement and expand existing transit services, and more clearly emphasizes our role in supporting Denver’s Vision Zero program toward a safer transportation system for all users,” said Eulois Cleckley, the current head of Public Works, in a statement to Colorado Politics.

Cleckley was tasked with overseeing the transition and will become the new department’s executive director.

As of 9 a.m. Wednesday, nearly 74% of voters had approved the measure.

“We are appreciative of the citizens of Denver embracing a very efficient model for us to be able to provide better service in both our EMS and our fire protection methods from this point forward,” Capt. Greg Pixley said.

The charter amendment adds full-time emergency medical technicians to the city’s fire department, meaning its employees in other roles who’ve been working overtime hours in the unit will no longer have to.

The move is all about efficiency: Cost savings will allow for longer operating hours and the possibility of expanding services to areas in need, while also providing another career path into the department.

Roughly 84% of voters showed support for the measure as of 9 a.m. Wednesday.

Councilman Kevin Flynn, who initiated Referred Question 2D that requires elected officials to live where they work, said he was not surprised that the measure received more favorable votes, at about 90%, than any other item on Denver’s ballot.

“Not only is it a simple clarification to the basic idea that elected officials need to live where they represent, but it is also added an automatic removal from office if they are found not to be residents anymore,” he said.

One thing he found “puzzling,” however, was that 10% of voters rejected the measure.

Aurora voters decide Tuesday whether to revive the political career of a former Republican congressman or to elect the suburban city's first Democratic mayor in memory.

Mayor Michael Hancock faced yet another direct challenge from Democratic City Councilwoman Candi CdeBaca on Monday when she targeted his 2020 budget proposal — and the process — during a City Council meeting.

New Census Bureau data show that Colorado has become less white and more racially diverse since the last decennial census, but only slightly.

Mayor Michael Hancock is forging ahead with his mobility plan now that City Council green-lighted his 2020 budget and Denver voters overwhelmingly approved his initiative to create a transportation department.

TRAIL MIX | Citizen Voters push has support, but it might be off the mark

Organizers behind a proposed Colorado constitutional amendment that would make explicit that only citizens can vote in elections, this week turned in what they predicted could be a record number of petition signatures.

The three-person panel sets the ballot title for proposed initiatives that meet the legal requirement to pertain to a single subject.