The General Accounting Office has agreed to review the Trump administration's decision to move the headquarters of the Bureau of Land Management to Grand Junction, according to U.S. Rep. Raul Grijalva, D-Ariz., chair of the House's Committee on Natural Resources.

The GAO will examine whether the decision was properly planned and analyzed and would provide the benefit claimed by the administration, Grijalva said in a Wednesday morning news conference. He was joined by U.S. Rep. Deb Haaland, D-N.M., former BLM Director Bob Abbey and former Deputy Director Henri Bisson.

"The committee has seen no analysis, no planning, no budget. ... BLM employees and American taxpayers deserve better," Grijalva said.

The move is the latest in efforts by House Democrats on the Committee on Natural Resources to look into the decision-making behind the BLM move.

In a Nov. 14 letter to comptroller general Gene Dodaro, Grijalva said the BLM cited benefits to the move such as "enhanced management, oversight, and communication; improved customer service and stakeholder engagement; and potential for decreased property leasing costs and travel expenses."

But that's being questioned by former BLM employees, Grijalva said. 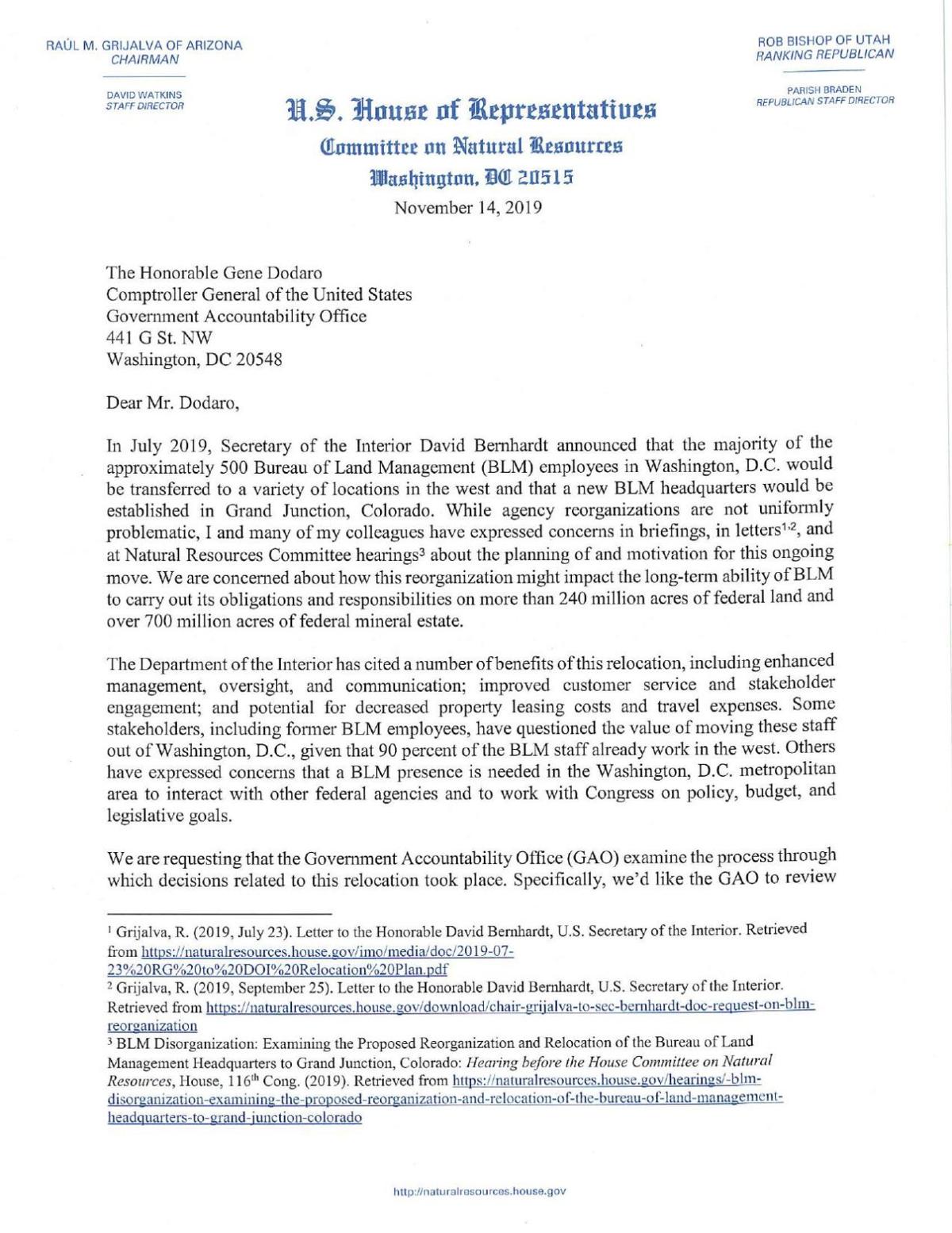 Grijalva asked the GAO to review:

Grijalva said during the Wednesday news conference that a decision earlier this year to move U.S. Department of Agriculture career employees from Washington, D.C., to Kansas City caused three-quarters of them to quit.

The move to Grand Junction by the BLM is a "intentionally disruptive" and a "shameless attempt to destroy" the BLM, he said.

Haaland, who chairs the subcommittee on public lands, said the BLM's disregard for its employees' career expertise makes it clear that the reorganization is not about making a good faith effort to improve services.

She also said the move would make it easier for the administration to sell off public lands to the highest bidder.

In a Dec. 4 letter to Secretary of the Interior David Bernhardt, Grijalva pointed out that the committee had asked for documents back in September on the department's "disparate impacts analysis for the planned reorganization" that would demonstrate how the move would not disproportionately impact any protected classes of employees.

That includes 312 black BLM employees, 41% of the agency's staff, who are currently based in Washington, D.C. Many positions targeted for relocation will be going to states where the total black population is significantly smaller, he wrote. Those documents were never provided.

Grijalva warned in the Dec. 4 letter that a disparate impact on protected classes of employees could expose the agency to litigation under the Civil Rights Act "that would rival the cost of the entire relocation."

"They have clear authority to ask questions of BLM employees, both career staff and political appointees, and agencies are expected to cooperate," said House Natural Resources Committee spokesman Adam Sarvana.

"If they want to see documents, agencies are supposed to share them. GAO reports can’t unilaterally change policy, even if they find wrongdoing, but they can include recommendations to policy makers and highlight misconduct they uncover."

BLM employees were notified Nov. 12 that they have until Dec. 12 to decide if they're going to make the trek out West. However, according to E&E News, the agency could lose the bulk of its career employees. About 160 staff were given the option to Grand Junction or to other BLM offices in the West or to quit.

Grijalva said employees are being asked to move in the middle of the school year and right before the holidays. "More than 90% of BLM employees already work in the field. This is not about efficiency or being closer to the land. The agency is well represented everywhere it operates. The people being forced to move (or lose their jobs) over the holidays work in D.C. for a reason."

The agency has already started to advertise positions, such as BLM chief of staff, senior policy adviser and senior litigation specialists, as well as assistant director of resources and planning, according to E&E.

The BLM's acting chief is William Perry Pendley, who ran the Mountain States Legal Foundation in Lakewood for nearly three decades. The foundation has sued the federal government numerous times, including lawsuits against the Department of the Interior, the Endangered Species Act, the Clean Water Act and the U.S. Forest Service.

Pendley has said he does not intend to move with the BLM to Grand Junction and will stay in Washington, D.C. although the BLM's website says the "BLM Director, Deputy Director of Operations, Assistant Directors, and a few members of their staffs will be located in Grand Junction."

That presumably refers to the BLM's permanent director, although President Trump has never nominated anyone for that position in the three years he's been in office.

Pendley's time as interim head of BLM extended to April 3

Secretary of the Interior David Bernhardt said the extension is to "ensure uninterrupted management and executive of the duties" of the position.