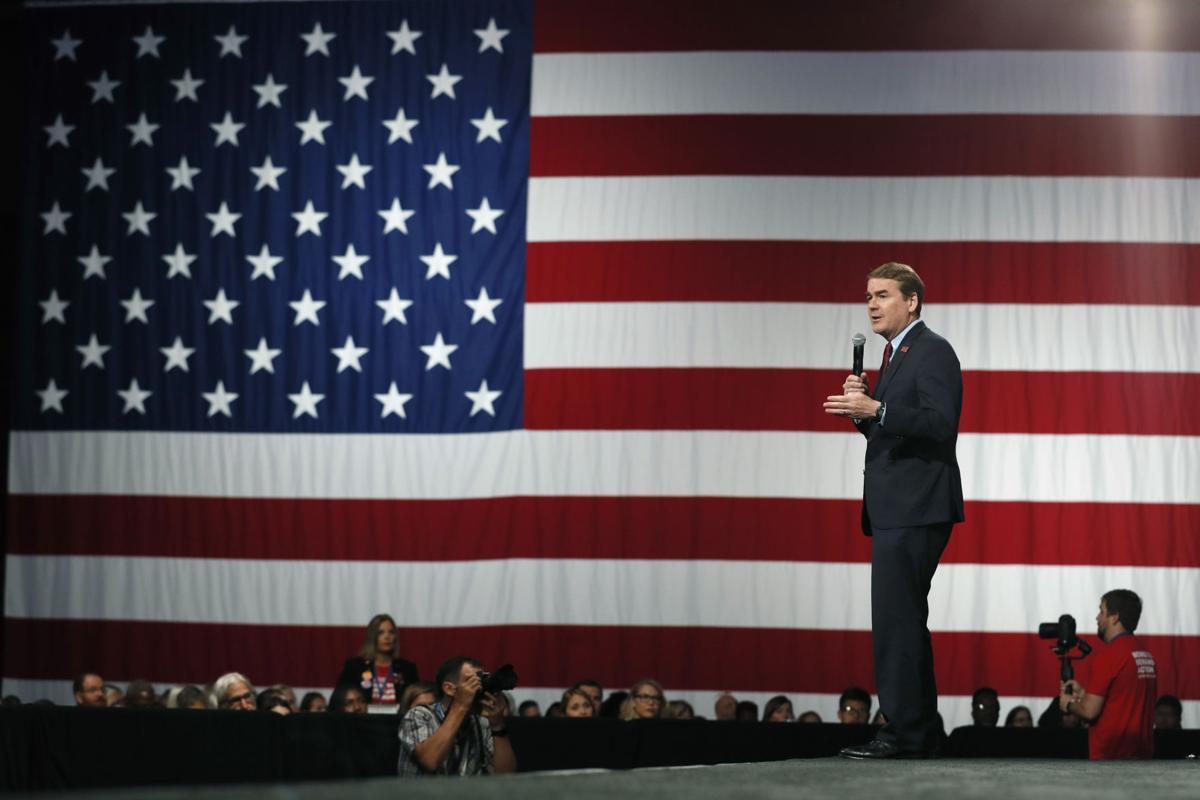 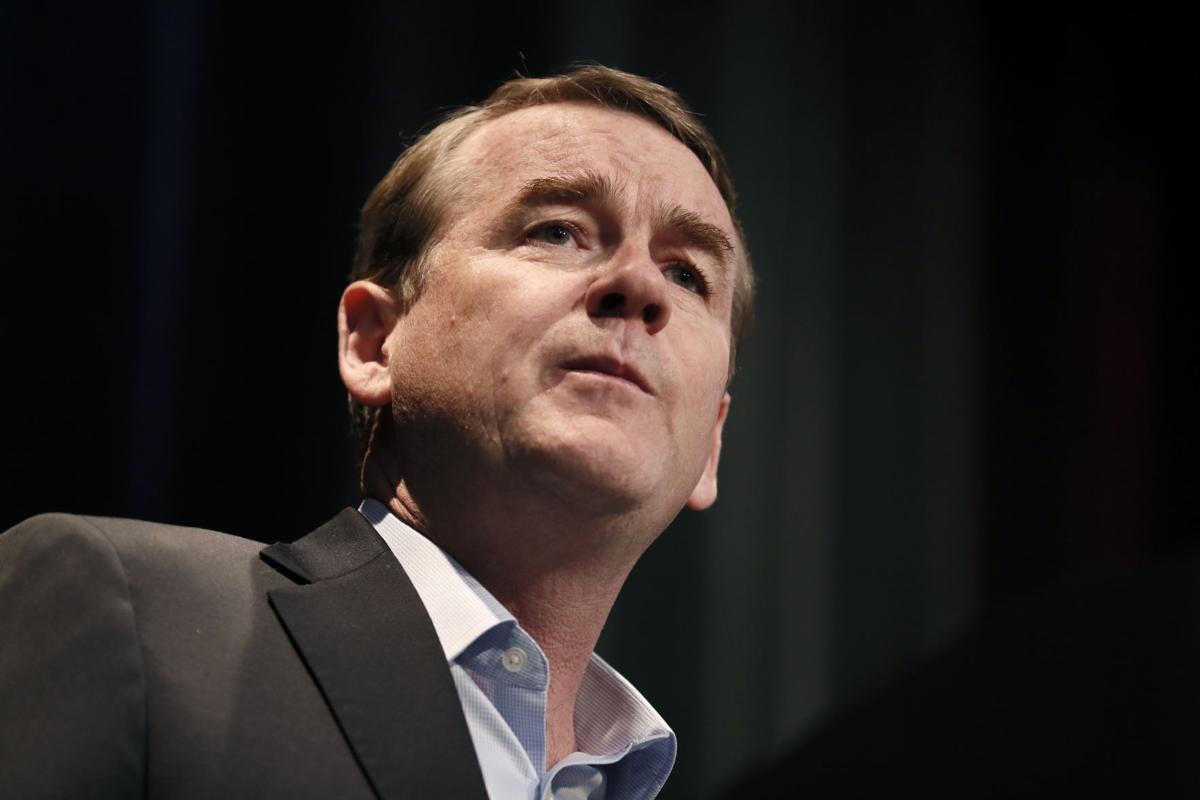 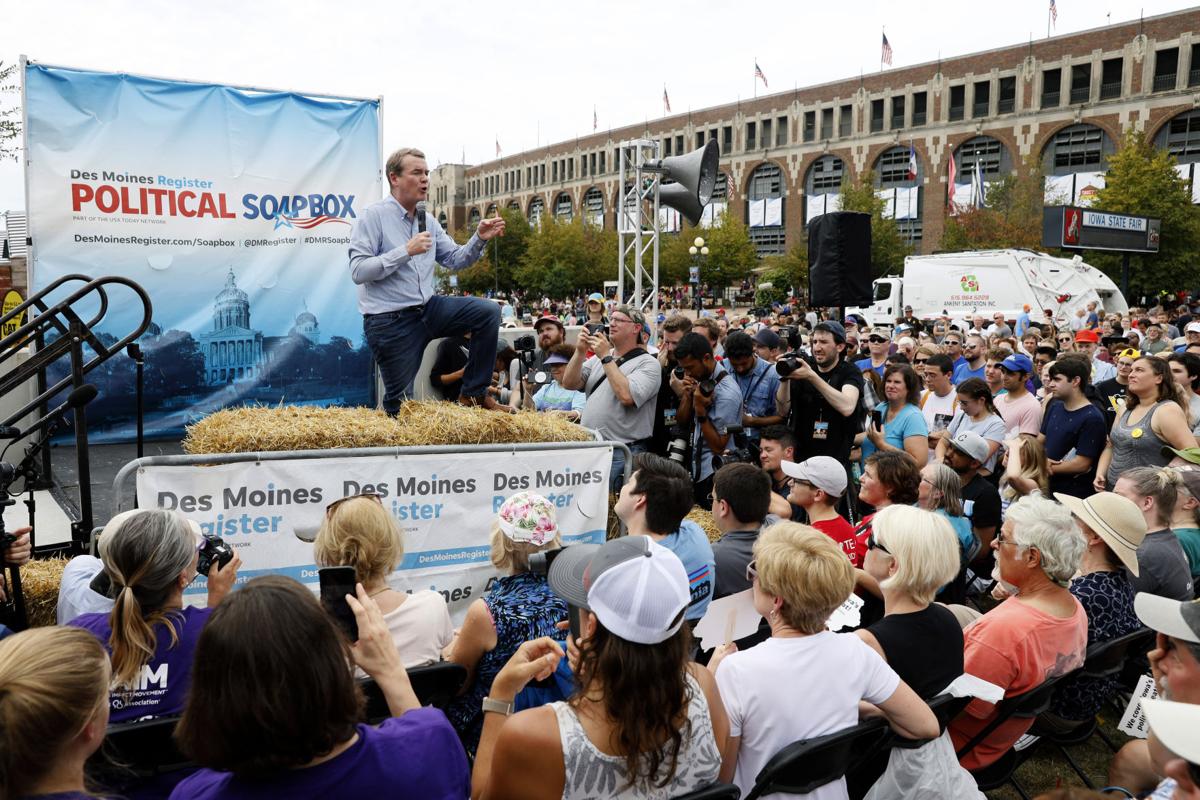 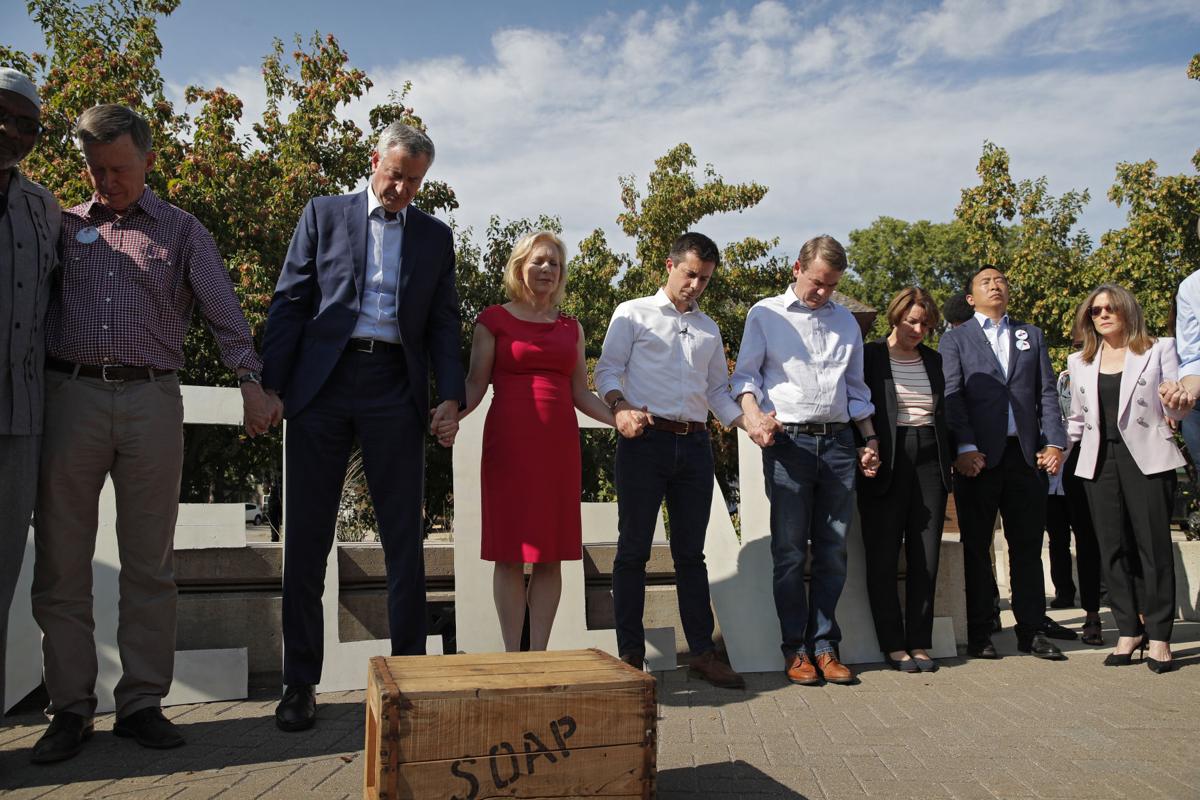 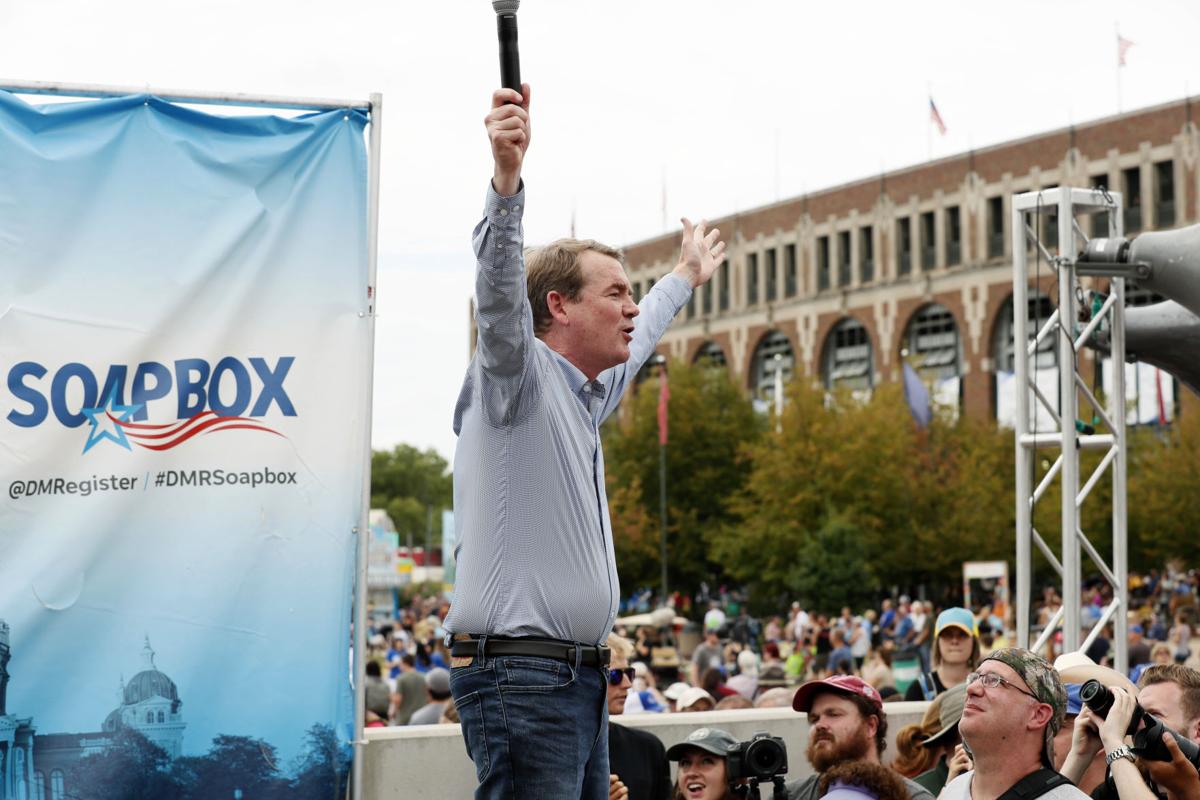 Democratic presidential candidate Sen. Michael Bennet reacts after his speech at the Des Moines Register Soapbox during a visit to the Iowa State Fair on Aug. 11, 2019, in Des Moines, Iowa.  (AP Photo/Charlie Neibergall) 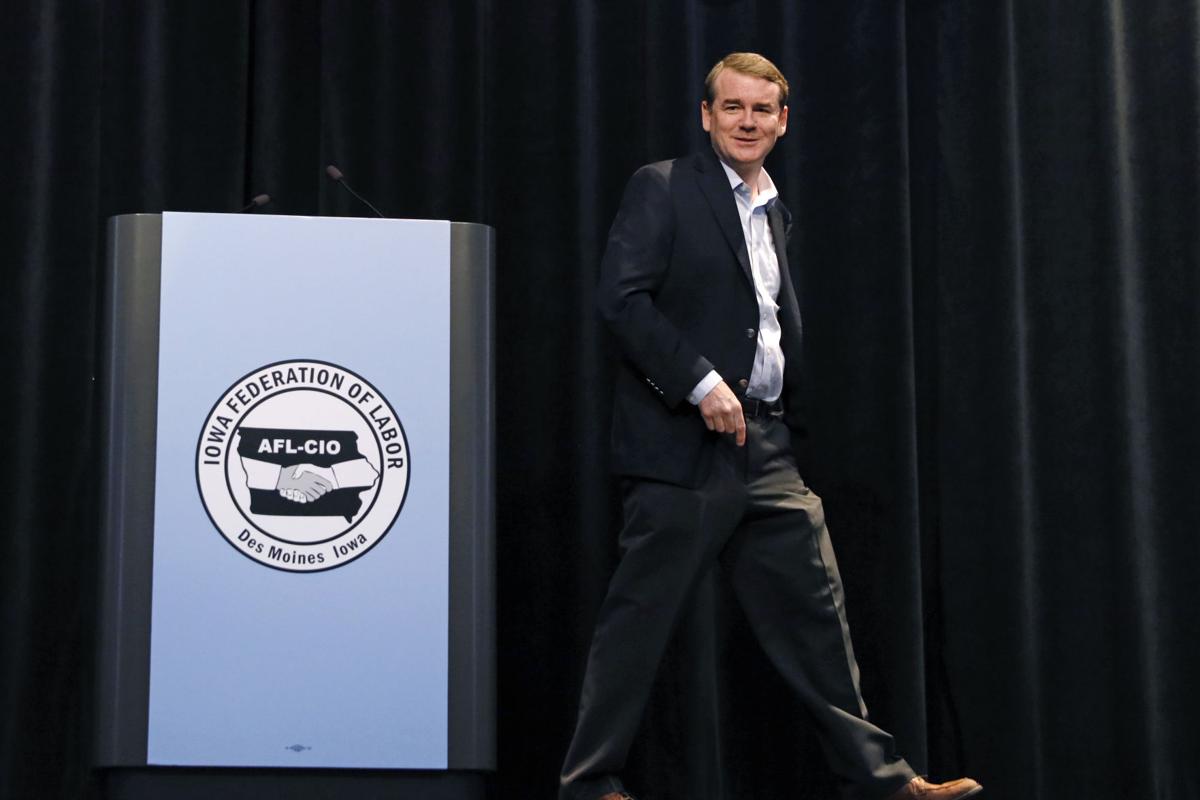 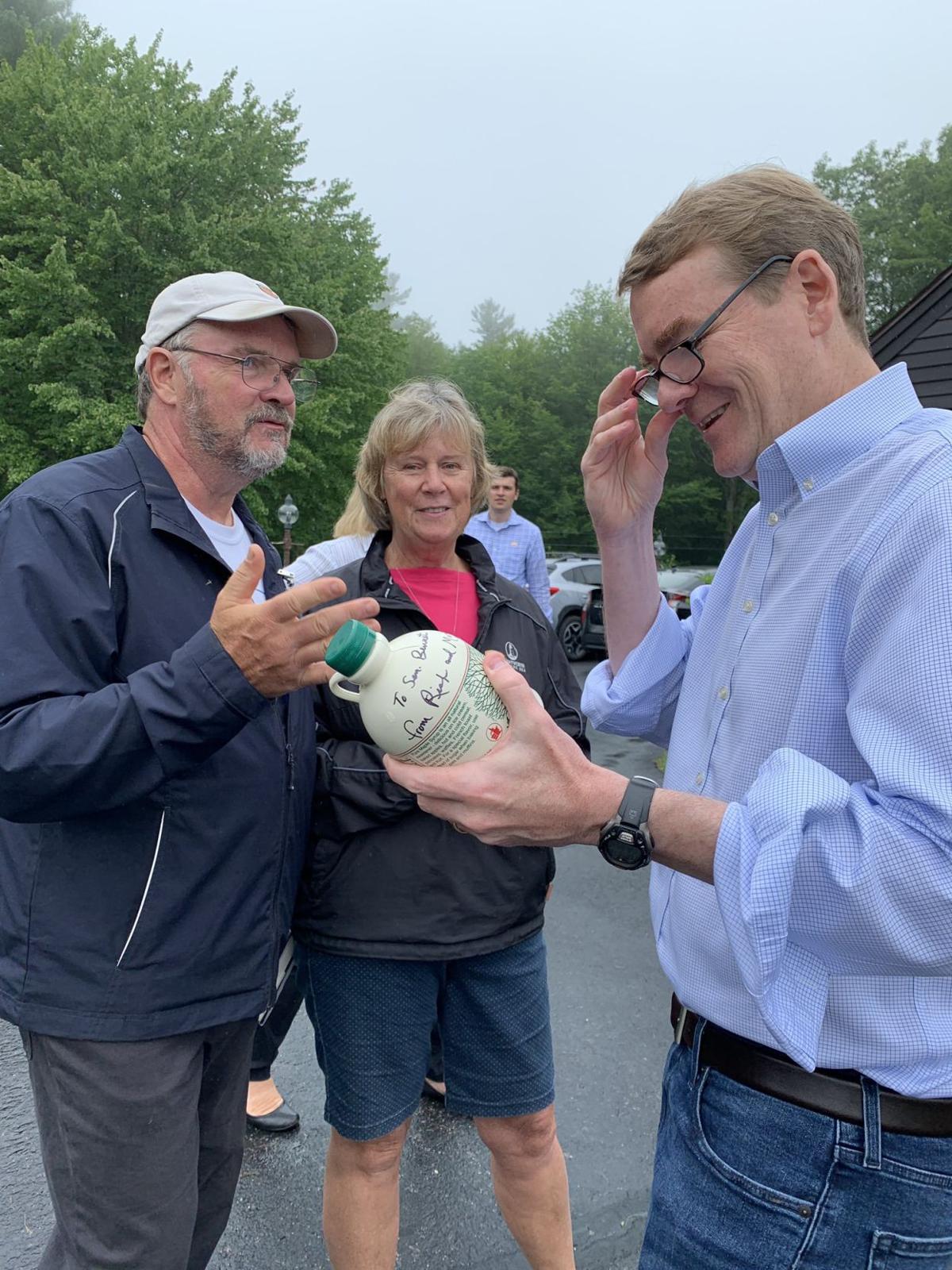 In a photo posted Aug. 17 to Twitter, Sen. Michael Bennet is seen examining a jug of maple syrup "autographed by the sugarmaker himself” at Miller Farm in New Hampshire. (Bennet campaign via Twitter)

Democratic presidential candidate Sen. Michael Bennet reacts after his speech at the Des Moines Register Soapbox during a visit to the Iowa State Fair on Aug. 11, 2019, in Des Moines, Iowa.  (AP Photo/Charlie Neibergall)

In a photo posted Aug. 17 to Twitter, Sen. Michael Bennet is seen examining a jug of maple syrup "autographed by the sugarmaker himself” at Miller Farm in New Hampshire. (Bennet campaign via Twitter)

The Democratic U.S. senator — now the sole Coloradan left in the race with the exit of John Hickenlooper — will have to decide whether to keep campaigning as the spotlight narrows to the dozen or so White House hopefuls who are set to clear the next major hurdle in a historically crowded race.

Bennet has until Aug. 28 to meet polling and fundraising requirements in order to qualify for the next Democratic primary debate, set for mid-September in Houston. If not, he’ll have another month to meet the same benchmarks for the next debate, in October.

He’s made a dent in the Democrats’ discussion, keeping his signature issues center-stage — fixing a dysfunctional Washington, D.C., hitting the reset button on the American experiment.

And lately, Bennet has warned Democrats against embracing some of the more aggressively liberal policies proposed by some of the primary frontrunners, including the single-payer “Medicare for all” plan championed by Vermont Sen. Bernie Sanders.

“I'm actually very optimistic about our democracy if we deal with the problems that we're confronting,” Bennet said in an interview with Colorado Politics.

“If we don't, we're going to have a really hard time getting done any of the things that any of the candidates are talking about here. I think it's a combination of fixing the way Washington works, ending the corruption in Washington, and at the same time giving people the chance to really participate in the democracy by making it easier for people to vote and register to vote. I think that combination will be a powerful combination.”

As Bennet describes it, the only way Democrats have of enacting progressive policies is by first reforming Washington, D.C., but the party has a better chance of doing if its presidential nominee isn’t too far left.

“I believe that we have to build a broad coalition of Americans to beat Donald Trump but also to fix a corrupt Washington and to begin a new era of our American democracy and American opportunity,” he said. “I think we'll do that with the kind of policy agenda that I have been talking about. It's less likely if we do it with the policy agenda that some others in the field have talked about.”

It's an open question, though, how long Bennet will be able to command attention.

As things stand, Bennet probably won’t be on stage for the third debate, which so far is set to feature 10 candidates, with an 11th reportedly closing in — down from the 20 candidates spread across two nights, including Bennet and Hickenlooper, who qualified under looser requirements for the first two rounds of debates in June and July.

It could be what The Atlantic’s Russell Berman characterized as the “first great winnowing of the 2020 White House race,” dividing the candidates into those who qualify for the next round of debates — and those who don’t.

Lower-tier candidates — including Bennet — and their advisors have been savaging the Democratic National Committee’s stricter requirements for the September and October debates since they were announced. They charge that the party is forcing candidates to skew their strategies away from appealing to voters and instead chase small-dollar donors across the internet, reportedly spending as much as $80 or $100 to get a nominal contribution from a single, all-important unique donor, like billionaire Tom Steyer appears to have done in recent weeks.

“The DNC leadership in Washington has taken unprecedented steps to intervene in a nomination process that should belong to Democratic voters and caucus-goers,” Bennet advisor Craig Hughes told The Atlantic, calling the rules “arbitrary” and a “thumb on the scale on behalf of perceived frontrunners, celebrities, and billionaires who can buy their way in.”

For the next round, candidates need at least 130,000 unique donors and at least 2% support in at least four approved polls between June 28 and Aug. 28.

Despite making something of a splash in the early debates — his name was the second-most searched during the first half of the July debate in Detroit — Bennet hasn’t seen his share in polls improve from the string of ones and zeros he’s been racking up since a March poll, when his campaign was only a rumor.

And while Bennet hasn’t released the number of unique donors to his campaign, he wasn’t close to reaching the 65,000 donors needed for the first round of debates, so that could be a stretch.

If political pros and pundits had their way, Bennet would almost certainly have a place center-stage in the Democratic primary, with none other than Barack Obama starting the buzz in late 2016 by including Bennet on his short list of the “gifted Democratic politicians” on the party’s bench. (Also mentioned by Obama: Pete Buttigieg, the mayor of South Bend, Indiana, and Sen. Kamala Harris of California.)

“No doubt those seeking tectonic answers to 40 years of growing income inequality will turn to Elizabeth Warren for systemic change,” Patterson wrote. “But those desiring a thoughtful advocate for the progressive but more immediately practicable could look to Michael Bennet.”

“This is John Kennedy re-cloned,” said Carville, who steered Bill Clinton’s 1992 win over Republican President George H.W. Bush. “You can’t get any better than this guy.”

By Labor Day, there will be exactly five months remaining until Iowa’s first-in-the-nation caucuses — plenty of time for the primary field to jostle and reorder, potentially creating an opening for a well-regarded moderate like Bennet if some of the leading candidates falter.

Or it could mean there’s little time left to upset the rough shape of the race, which has remained mostly unchanged since April, except that Buttigieg has swapped places with former Texas Rep. Beto O’Rourke, joining the group of candidates consistently polling in mid-single digits or above, along with former Vice President Joe Biden, Sanders, Harris and Sen. Elizabeth Warren of Massachusetts.

In addition, a handful of those polling near the bottom of the field have dropped out, including Hickenlooper — who announced Aug. 21 that he’s running for Colorado’s other U.S. Senate seat — and Washington Gov. Jay Inslee, California Rep. Eric Swalwell and Massachusetts Rep. Seth Moulton.

Still, candidates who haven’t been polling appreciably better than Bennet are still at it, ranging from Ohio Rep. Tim Ryan, who has yet to register in the polls, to New York Sen. Kristin Gillibrand, considered a potential top-level candidate but whose campaign hasn’t caught fire.

In between the top tier and the bottom rung of candidates lie another seven candidates who have either qualified for the September debate or who have met the fundraising requirement but have yet to score at least 2% support in enough qualifying polls.

Sens. Cory Booker of New Jersey and Amy Klobuchar of Minnesota, Rep. Julian Castro of Texas and Andrew Yang, an entrepreneur and first-time candidate, will be at the debate, while Steyer, Rep. Tusli Gabbard of Hawaii and spiritual leader Marianne Williamson have met the donor mark but don't yet have enough qualifying polls to make it to Houston.

That’s a lot of Democrats to climb over to get to center stage.

Meanwhile, it appears that Bennet has been having a blast on the campaign trail, sampling delicacies and cavorting with his daughters, memorialized in social media posts that could easily be mistaken for dispatches from an extended family excursion across what just happen to be early primary states.

There he is examining a jug of “fantastic homemade maple syrup autographed by the sugarmaker himself” at Miller Farm in New Hampshire.

“I think my teeth are melting, one by one,” said Bennet, standing alongside his three daughters, after taking a bite of a deep-fried Snickers bar at the Iowa State Fair in a video posted to Twitter.

Still at the state fair, there’s Bennet behind the wheel of a bumper car, getting “gang[ed] up on” by his wife and daughters — after filling up on a corn dog, an apple egg roll, a fried pickle dog and some chocolate chip cookies, an NBC News reporter noted.

During a campaign swing across South Carolina’s impoverished “Corridor of Shame” in early August, the former Denver Public Schools superintendent kept the focus on what his campaign described as “segregation, improving access to quality education, and what the next president can do to combat the fact that ‘equal is not equal’ for far too many kids nationwide.”

But along the way, Bennet checked off most of the items on the Charleston, South Carolina's Post and Courier’s list of iconic regional dishes, including a Cajun filet biscuit, mustard-sauced barbecue and peach cobbler.

“No matter how irresponsible I am, the calorie count will never reach the amount [Senate Majority Leader] Mitch McConnell has added to the debt,” Bennet tweeted.

COVER STORY | Sports betting: Would it be a game changer for Colorado?

No September debate for Bennet; adviser demands answers from DNC on 'secretive' rules

Debate organizers last night made official what Bennet had already acknowledged: He will not be among the 10 candidates invited to the Sept. 12 debate in Houston.

Bennet to attend meet-and-greets in Iowa on campaign trail

Michael Bennet isn't slowing down his campaign after failing to quality for the September debate.

"Michael knows how to build the broad coalition we will need to win purple states like ours and others in 2020," former Colorado Gov. Bill Ritter said.

Perhaps Senator Bennet could talk the Democratic Senate Campaign Committee he formerly led about putting its thumb on the scales of Colorado’s Democratic primary.