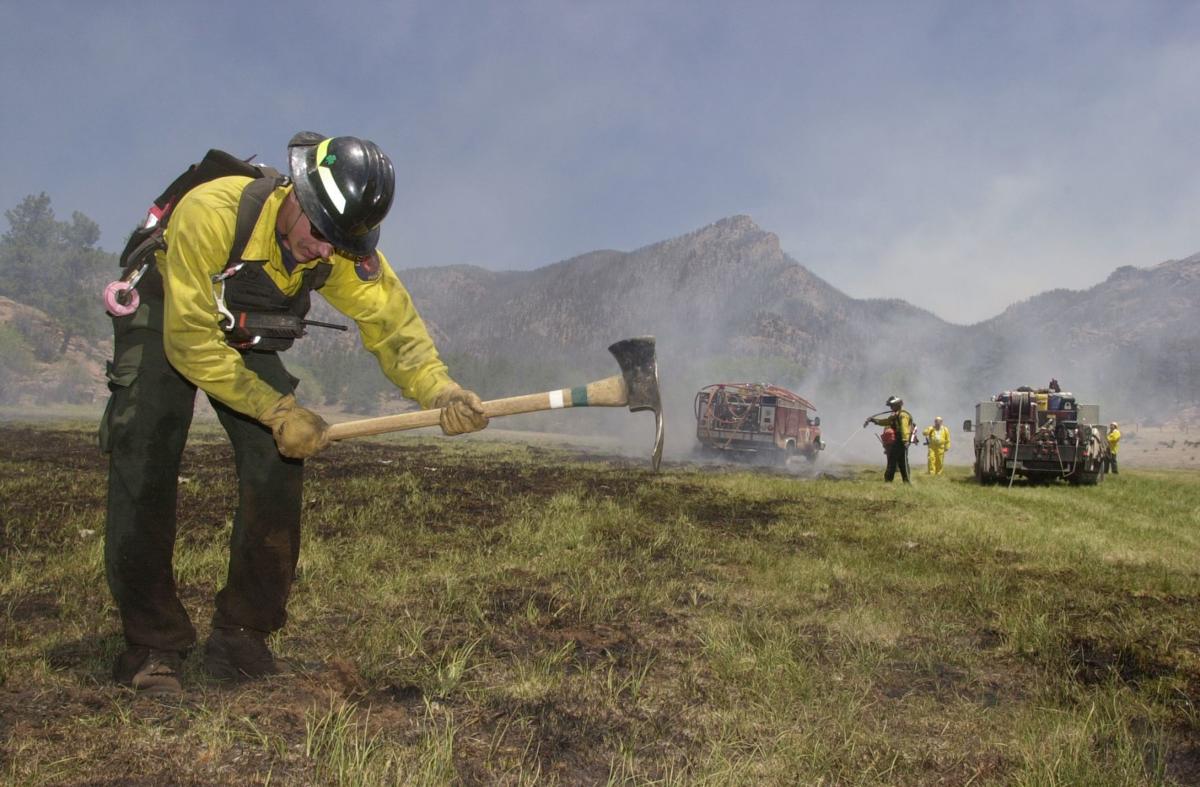 The Hayman fire in the Pike National Forest near Lake George continued to burn on June 12, 2002, keeping fire crews very busy. Ryan Anderson with Littleton Fire Rescue uses an ax to put out hot spots in a field off near Lake George. 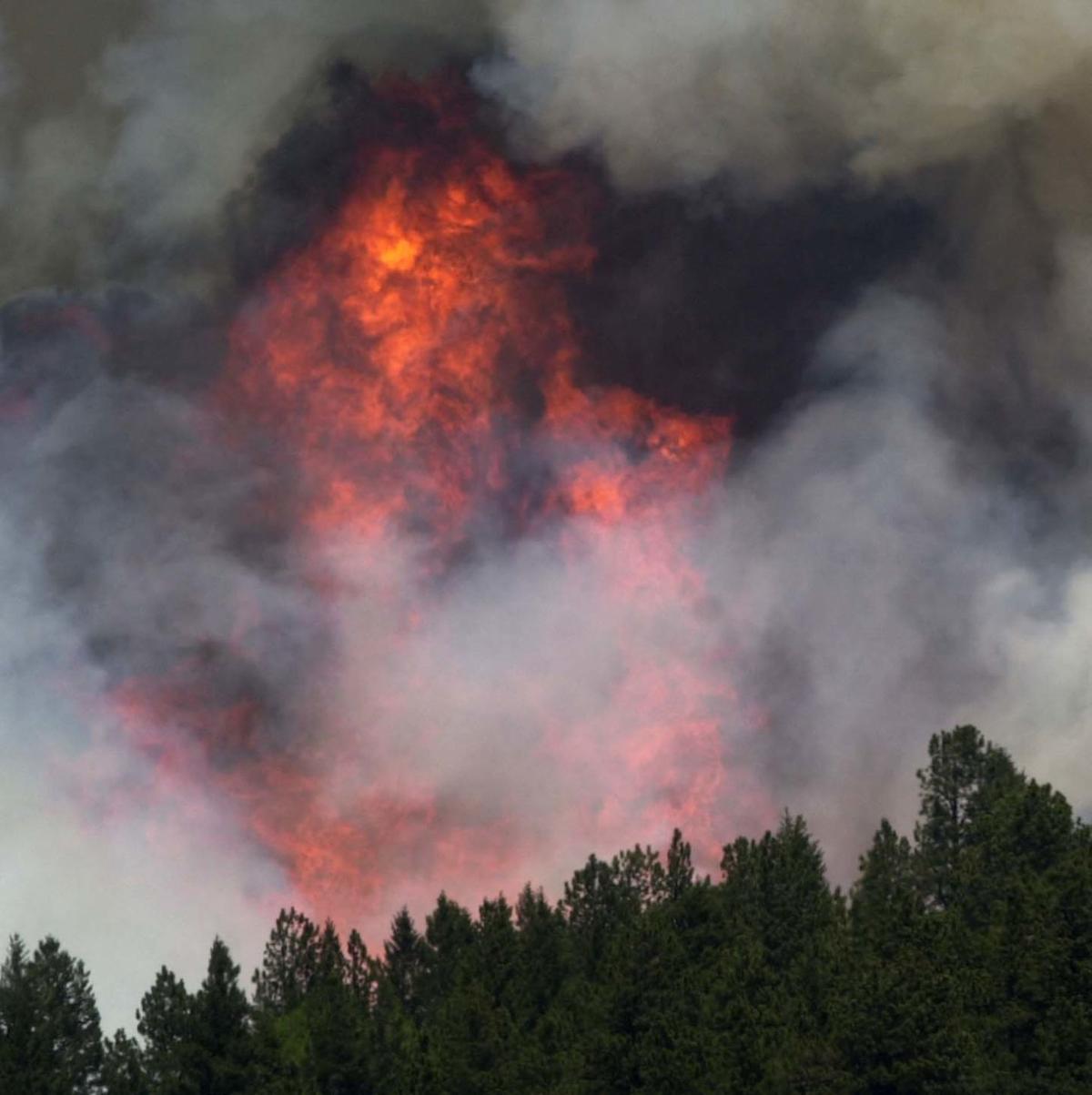 Massive flames from the Hayman Fire can be seen north of Florissant on June 18, 2002.

The Hayman fire in the Pike National Forest near Lake George continued to burn on June 12, 2002, keeping fire crews very busy. Ryan Anderson with Littleton Fire Rescue uses an ax to put out hot spots in a field off near Lake George.

Massive flames from the Hayman Fire can be seen north of Florissant on June 18, 2002.

WASHINGTON — Two of Colorado’s Democratic members of Congress sought answers Thursday on how to make their state more resilient to wildfires.

In DeGette’s home district, “Denver is a very large urban center, but we get all of our water from the mountains,” she said during a hearing of the House Natural Resources subcommittee on national parks, forests and public lands. “We’ve had situations with some of these devastating wildfires where the watershed has been compromised.”

She mentioned the examples of the 1996 Buffalo Creek Fire near Pine that burned 11,875 acres in the Pike National Forest and the 2002 Hayman Fire that started northwest of Colorado Springs and burned 138,114 acres. The Hayman Fire, which was caused by arson and burned for more than a month, still is classified as the worst in Colorado history.

The intensity and the amount of mountain forest area that burned damaged watersheds, thereby diminishing the amount of water available to surrounding communities.

“The damage that was caused to the Denver water collection system was over $27 million in restoration and repair,” DeGette said.

DeGette asked expert witnesses whether a program in Colorado that started after the Hayman Fire to protect watersheds could be expanded to other areas at risk of wildfires.

The program joined efforts of the Denver Water Department and the U.S. Forest Service. Part of it used the Forest Service’s “Forests to Faucets” system of collecting geographic data from satellites and other sources to identify watersheds at risk of wildfire damage.

Typically, workers are assigned to remove dead wood, pine needles and underbrush from the watershed areas to reduce the chances they could fuel flames.

Other parts of the Colorado program sought to educate landowners about lawn treatments that reduce the risk of catching fire, removing bushes close to homes that could spread flames to the structures, and using flame retardant building materials.

Part of the effort was focused in Summit County, near Breckenridge.

“There was quite a turnaround there,” said Ray Rasker, director of the Bozeman, Montana-based Headwaters Economics, a, nonprofit research group that seeks to improve community development and land management.

After the program was implemented, a fire that started in Summit County last June was quickly contained by firefighters. No homes were destroyed and the watershed was protected.

However, Rasker acknowledged that many communities can protect only key assets rather than prevent what many residents of western states consider unavoidable.

“For a lot of communities, they realize the fires are coming regardless of what we do,” Rasker said.

“They also are increasing in intensity and in cost,” he said.

Last year, Colorado spent about $40 million, while the U.S. Forest Service spent $120 million in the state fighting wildfires, he said. Some counties in his district have hired their own personnel to monitor campfires and educate the public about fire dangers, which he said should be a job of the U.S. Forest Service.

"Do you think that right now the Forest Service is doing enough to make sure communities are educated, informed and prepared?" he asked.

Patti Hirami, an acting deputy chief of the Forest Service, did not acknowledge a failure by the federal government to prevent wildfires, only that prevention programs require an organized effort.

“It takes a number of people and different programs and different venues to help not only homeowners, but landowners and everyone involved in this very difficult situation to be able to come together for some solution,” she said.

The U.S. Bureau of Land Management released a report April 26 that forecast a below-average risk of wildfires in Colorado from May through July, partly because the state’s snowpack was about 30 percent higher than average this year. In addition, temperatures are predicted to be lower than average, while precipitation is expected to be higher throughout the summer.

Nevertheless, Gov. Jared Polis on Tuesday cautioned homeowners they still should try to mitigate fire risks for their property.

Gov. Jared Polis warned Coloradans to not become complacent this summer despite predictions of an average to below-average wildfire season.