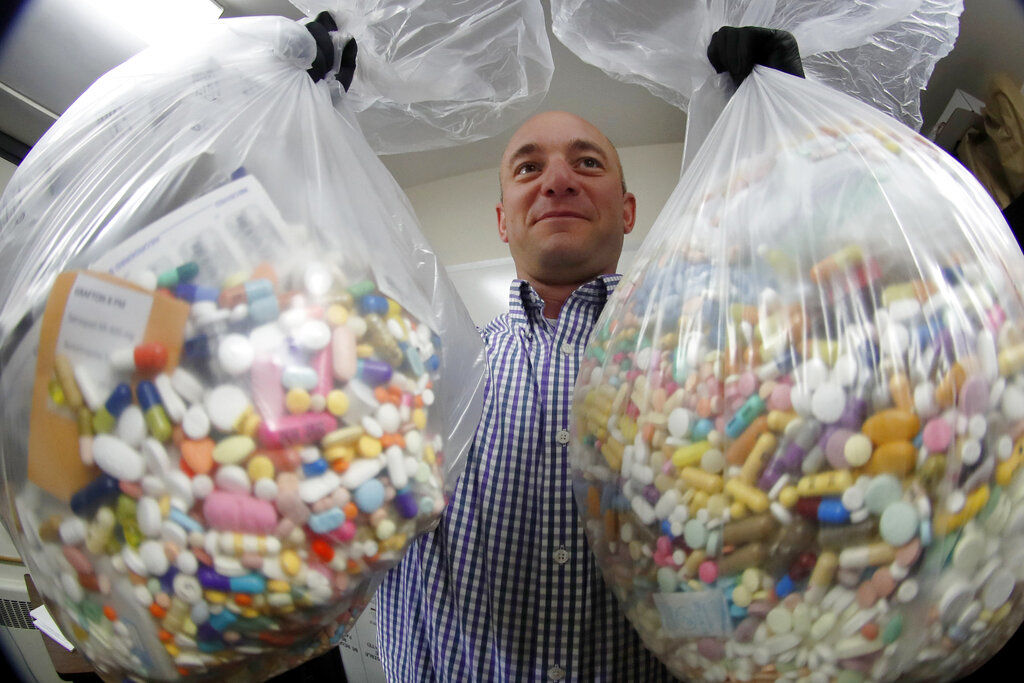 Narcotics detective Ben Hill, with the Barberton Police Department, shows two bags of medications that are are stored in their headquarters and slated for destruction, Wednesday, Sept. 11, 2019, in Barberton, Ohio. 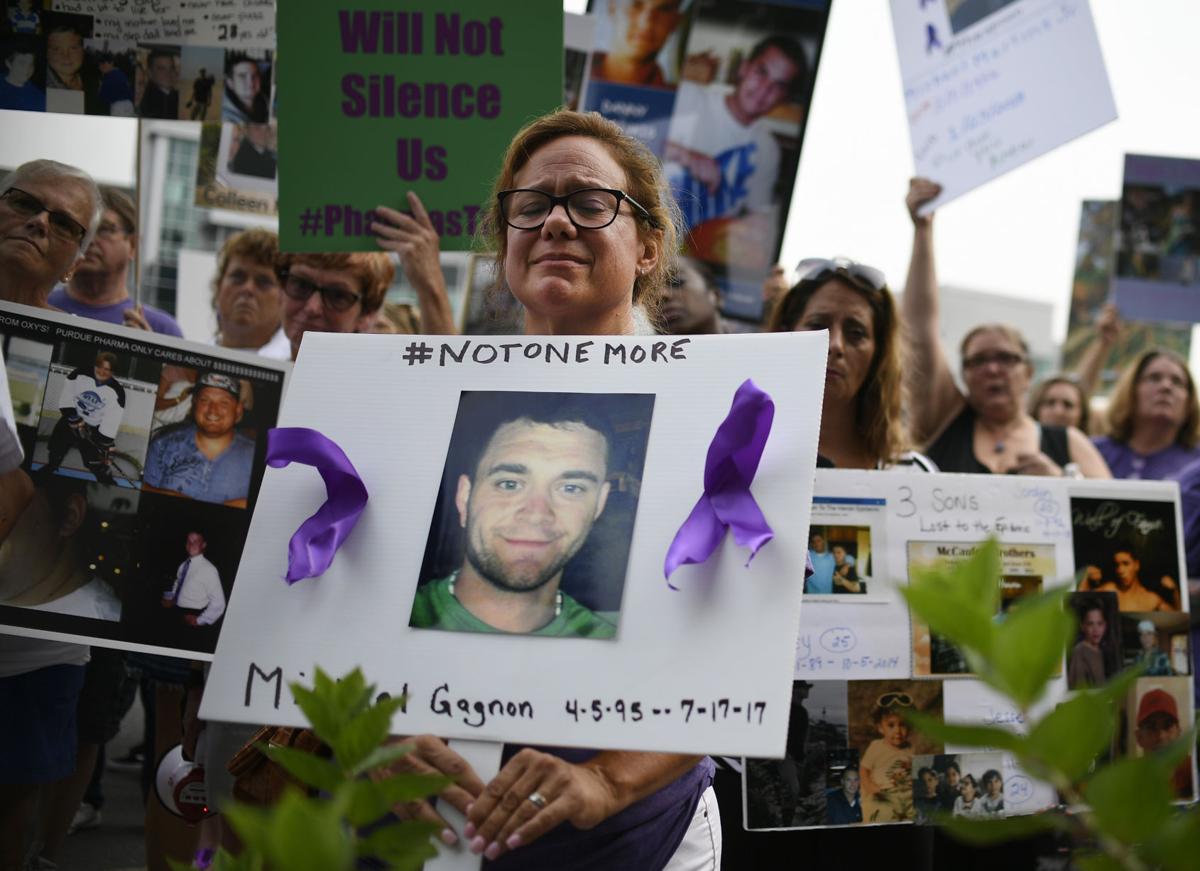 In this Friday, Aug. 17, 2018 file photo, Christine Gagnon of Southington, Conn. protests with other family and friends who have lost loved ones to OxyContin and opioid overdoses at Purdue Pharma LLP headquarters in Stamford, Conn. Gagnon lost her son Michael 13 months earlier.

Narcotics detective Ben Hill, with the Barberton Police Department, shows two bags of medications that are are stored in their headquarters and slated for destruction, Wednesday, Sept. 11, 2019, in Barberton, Ohio.

In this Friday, Aug. 17, 2018 file photo, Christine Gagnon of Southington, Conn. protests with other family and friends who have lost loved ones to OxyContin and opioid overdoses at Purdue Pharma LLP headquarters in Stamford, Conn. Gagnon lost her son Michael 13 months earlier.

The news that Purdue Pharma had reached a settlement deal Wednesday over its alleged role in the nation's opioid crisis isn't winning any favor with Colorado Attorney General Phil Weiser.

According to NBC News, the settlement reached between Purdue and officials in 27 states would strip the Sackler family, which owns the company, of its control, allow the company to go into bankruptcy, and convert it to a non-profit trust. The settlement also includes up to $12 billion, including money from the Sacklers.

If accepted, the settlement would resolve hundreds of lawsuits around the nation.

But Weiser — and officials in 16 other states — have rejected the settlement.

In a statement Wednesday, Weiser said “Colorado has not agreed to any settlement with Purdue Pharma or the Sackler Family. No current offer adequately addresses the harm that Purdue and the Sacklers have caused to communities and individuals in Colorado by contributing to the opioid crisis. We will continue to work hard to hold them accountable and obtain an appropriate settlement or judgment to address the crisis.”

“Having the Attorney General’s Office represent the state ensures that any money obtained from litigation is returned to Colorado communities and those directly impacted by the opioid crisis, rather than going to pay for private law firm fees,” Coffman said in a news release a year ago.

In July, Weiser followed the lead of other states that decided to sue the Sackler family in addition to the company. Weiser said at the time that "front groups, opinion leaders and their sales force, Purdue and the Sacklers sponsored and distributed misleading studies claiming that prescription opioids were effective long-term treatments for chronic pain, and they ignored expert warnings about the dangers of opioids."

Opioid addiction has contributed to the deaths of some 400,000 Americans over the past two decades, hitting many rural communities particularly hard.

In a statement after Wednesday's announcement, the company said that it "continues to work with all plaintiffs on reaching a comprehensive resolution to its opioid litigation that will deliver billions of dollars and vital opioid overdose rescue medicines to communities across the country impacted by the opioid crisis."

Members of the Sackler family said in a statement there are good reasons for governments to join the settlement: "This is the most effective way to address the urgency of the current public health crisis, and to fund real solutions, not endless litigation."

The Associated Press contributed to this report.

Lawyers suing over the toll of opioids asked a judge Friday to allow a structure for all 25,…

Drug overdose deaths across Colorado eased slightly in 2018 for the first time in years, led by a drop in prescription painkiller deaths that have been a root cause of the opioid epidemic.

The state has added members of the family that owns Purdue Pharma to a state lawsuit against the nation's largest manufacturer of opioids.