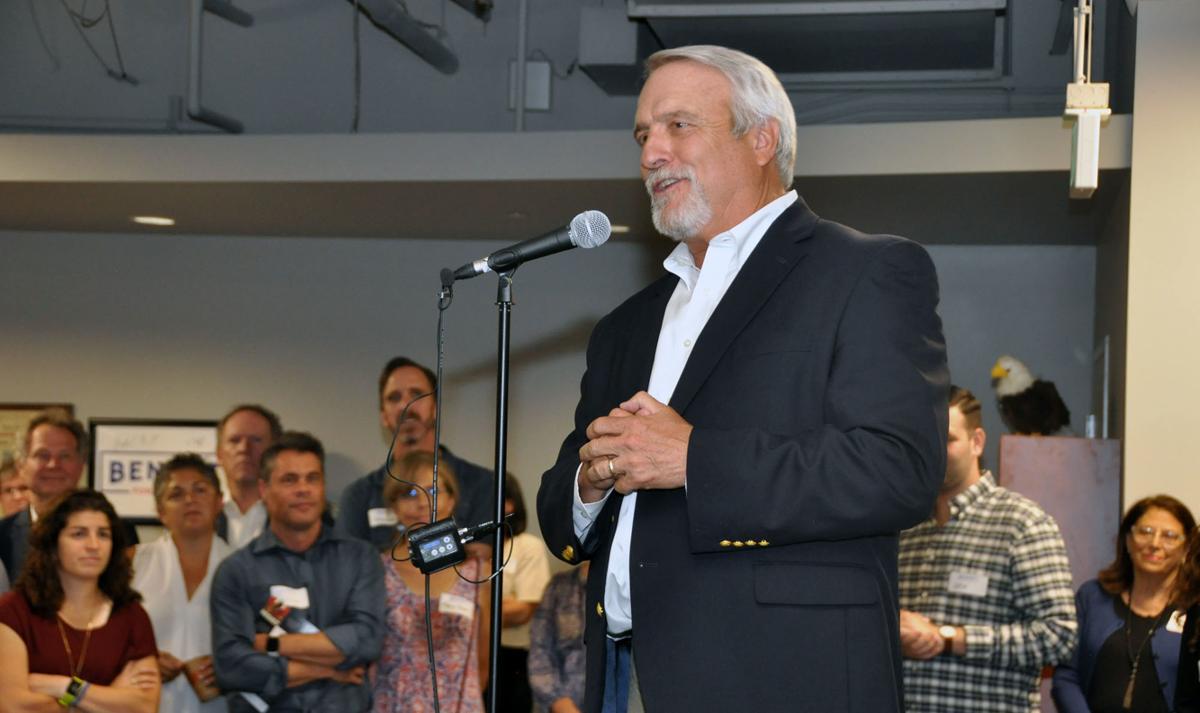 Former Colorado Gov. Bill Ritter endorses U.S. Sen. Michael Bennet for the 2020 Democratic presidential nomination on Tuesday, Sept. 10, 2019, at the opening of the Colorado senator's national campaign headquarters in Lakewood. Ritter, who appointed Bennet to the Senate in 2009, said he has "the ideas, character, and unrelenting focus on ending politics as usual that we need in our next president." 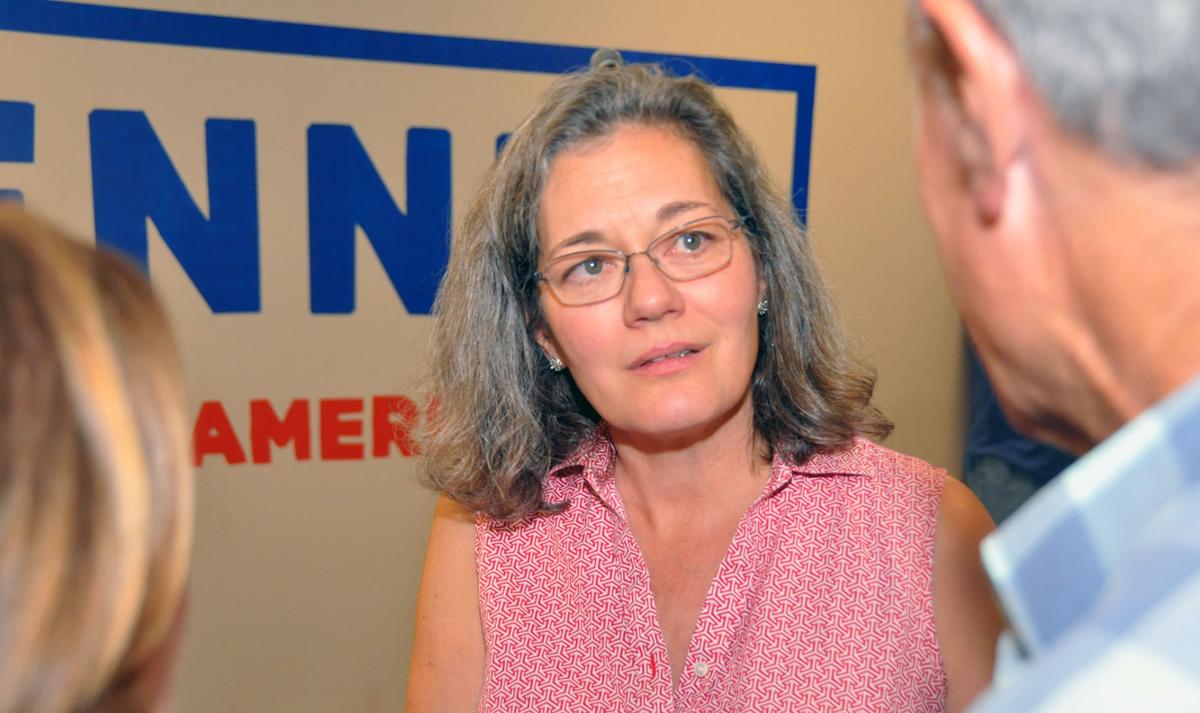 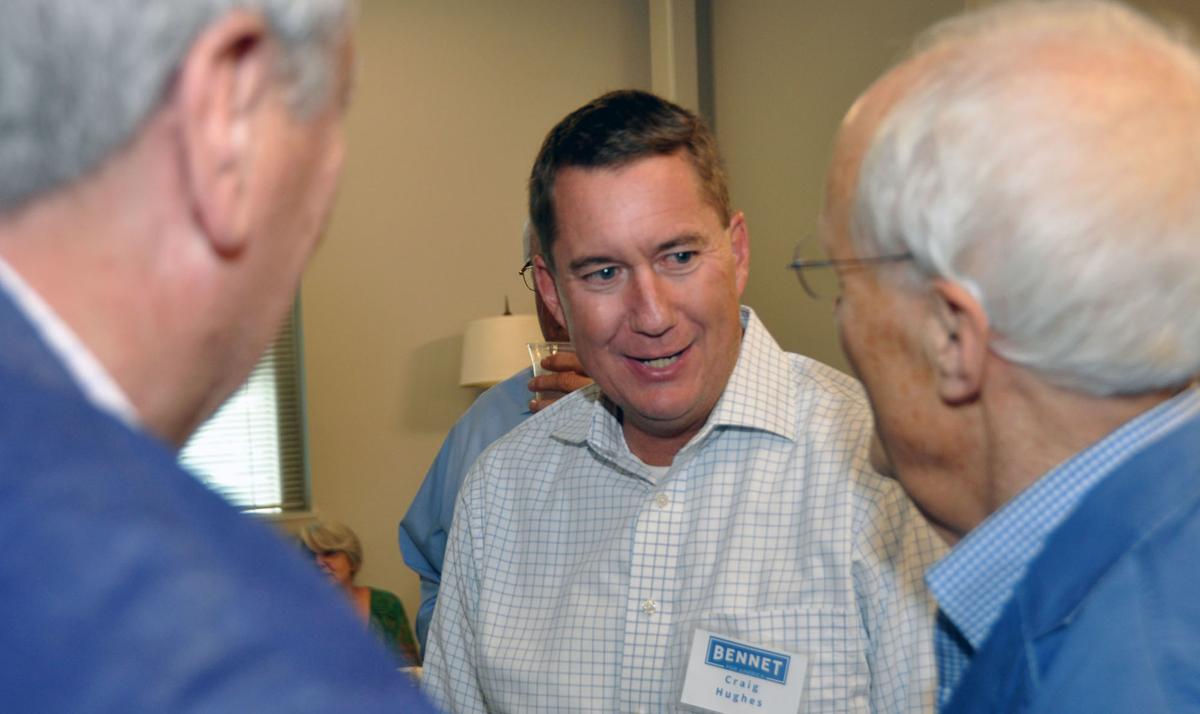 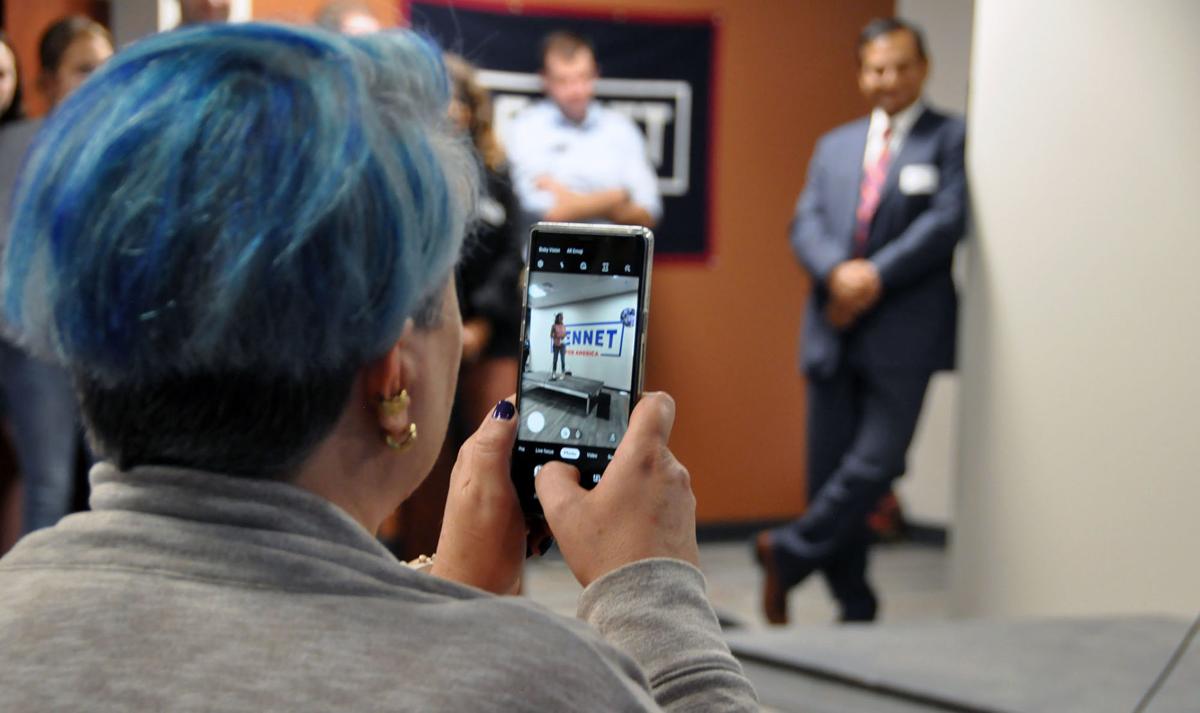 A supporter uses a smart phone to record Susan Daggett's remarks at the opening of the national presidential campaign headquarters of Daggett's husband, U.S. Sen. Michael Bennet, on Tuesday, Sept. 10, 2019, in Lakewood. 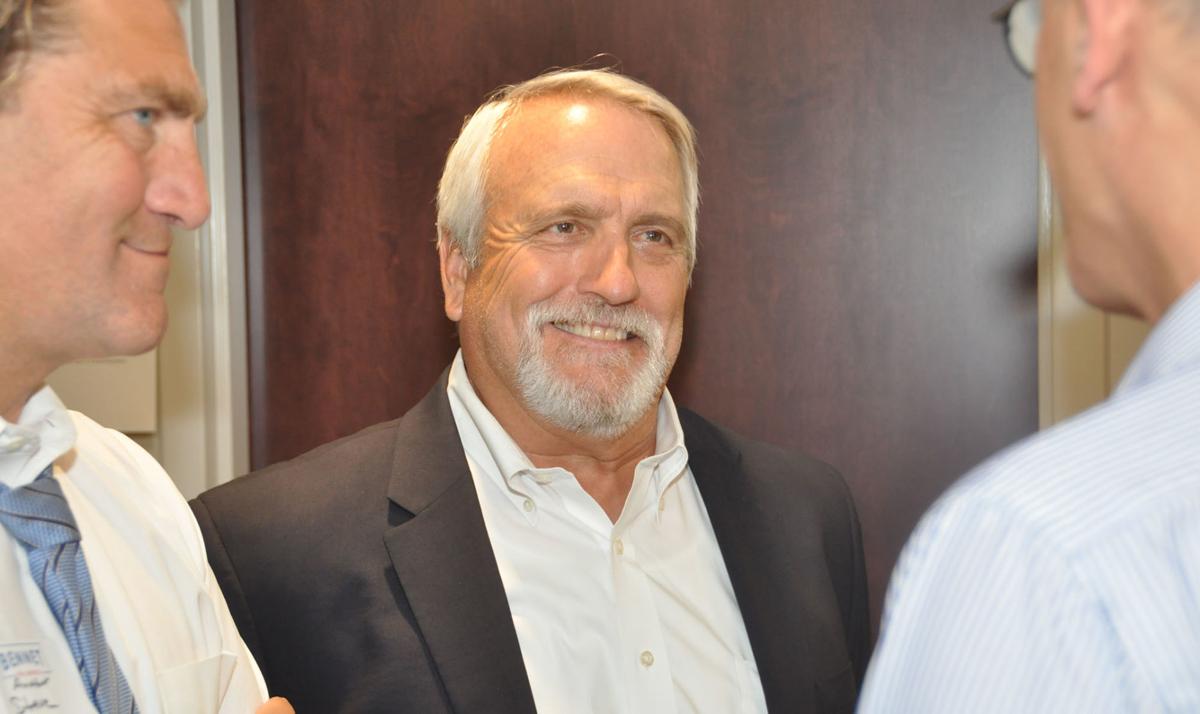 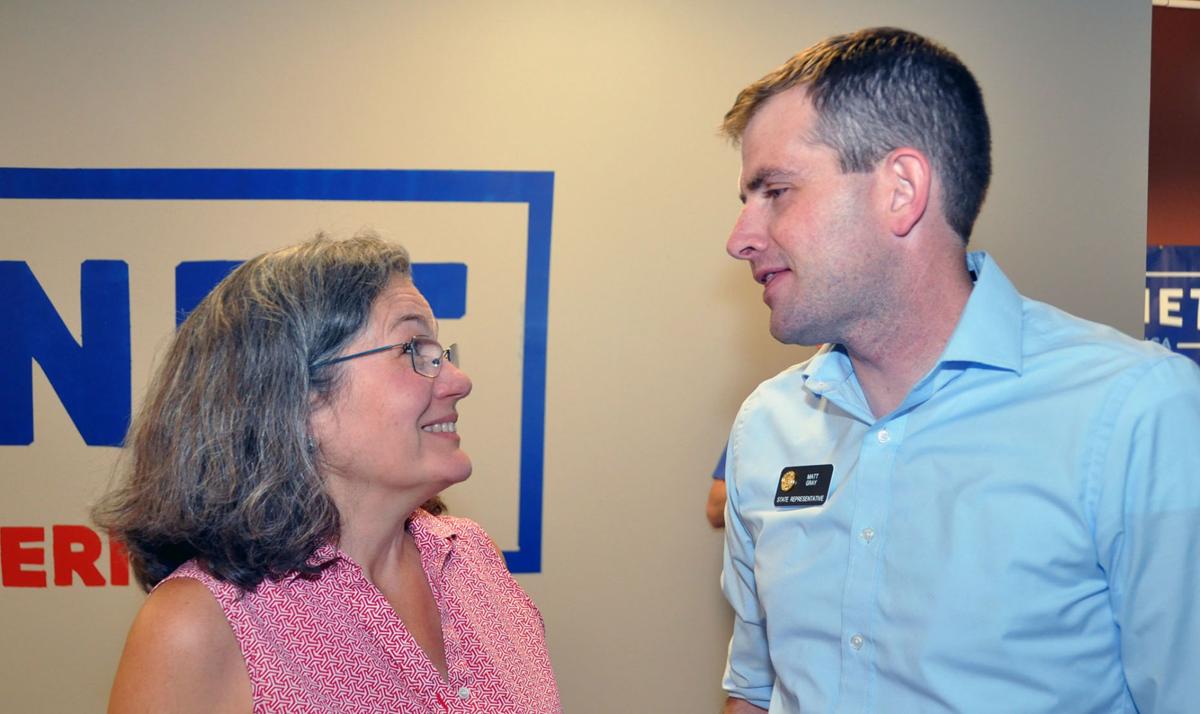 Former Colorado Gov. Bill Ritter endorses U.S. Sen. Michael Bennet for the 2020 Democratic presidential nomination on Tuesday, Sept. 10, 2019, at the opening of the Colorado senator's national campaign headquarters in Lakewood. Ritter, who appointed Bennet to the Senate in 2009, said he has "the ideas, character, and unrelenting focus on ending politics as usual that we need in our next president."

A supporter uses a smart phone to record Susan Daggett's remarks at the opening of the national presidential campaign headquarters of Daggett's husband, U.S. Sen. Michael Bennet, on Tuesday, Sept. 10, 2019, in Lakewood.

Nearly 100 supporters came to the grand opening of Bennet for America's new digs, on the second floor of a new office building at West Colfax Avenue and Garrison Street.

Former Gov. Bill Ritter, who appointed Bennet to the Senate in 2009, formally endorsed Bennet's White House bid and predicted that Bennet would confound the skeptics the same way he did in 2010, when he was elected to a full term in a Republican wave year.

As a newly minted senator, Ritter recalled, Bennet took office with hardly any statewide name recognition and overcame "headwinds against Democrats" to win a close race in an evenly divided state.

A former Democratic U.S. senator from Colorado who once had his eye on the presidency is throwing his support behind a successor with the same aspirations.

"Michael knows how to build the broad coalition we will need to win purple states like ours and others in 2020," said Ritter, director of the Center for the New Energy Economy at Colorado State University. “Michael’s record in the Senate shows us the kind of leader he will be in the White House — one with the intellect, humility and ability to make progress on our most pressing challenges."

It was Bennet's second endorsement from an iconic Colorado Democrat. Former U.S. Sen. Gary Hart threw his support behind Bennet on Saturday in New Hampshire, predicting Bennet would upset the primary race just as Hart did in 1984, when the fresh-faced senator from Colorado came from behind to defeat former Vice President Walter Mondale in the state's primary.

Although low polling and fundraising numbers mean Bennet won't be in a nationally televised debate Thursday night in Houston with 10 other primary candidates, his supporters in Lakewood cheered his chances in a contest many insist is still up for grabs, with more than four months to go.

No September debate for Bennet; adviser demands answers from DNC on 'secretive' rules

Debate organizers last night made official what Bennet had already acknowledged: He will not be among the 10 candidates invited to the Sept. 12 debate in Houston.

"He is the only person in this race who has won two national elections in a purple state — not on the coasts, not in a place where the politics is easier," said Bennet's wife, Susan Daggett. "He ran in 2010 when the tea party was ascending, Democrats lost everywhere, and he won by defending Obamacare, not running from it. He knows how to win these races ..."

Bennet was polling at only 0.4% support nationally Tuesday, according to the RealClearPolitics average , and he isn't faring better in state polling. A series of CBS News/YouGov polls released Monday found Bennet trailing with 0% support in the first four states on the primary calendar — Iowa, New Hampshire, Nevada and South Carolina.

But Daggett told reporters she takes issue with the predictive power of early polling.

"If we wanted to be the party that excluded people, we'd be Republicans," presidential candidate Michael Bennet said.

But the Democratic National Committee's requirements to qualify for the debates ignores "a whole lot of things that actually matter to voters, and it takes a national view of the campaign instead of an early-state view, which is where the momentum is gained or lost," she said.

Daggett also dismissed speculation that Bennet is staying in the race with an eye toward being the eventual nominee's running mate or perhaps auditioning for a Cabinet post.

Rather, he's working to ensure that an appropriate agenda for the Democratic Party "is broadly shared — that we can beat Donald Trump, and we can take back the Senate and we can keep the House. It's a broad perspective on what we need to do."

Throughout the evening, Bennet staffers sold campaign merchandise and Bennet's new book, "Dividing America: How Russia Hacked Social Media and Democracy." The campaign also was signing up supporters to drive to Iowa for the famous Polk County Steak Fry on Sept. 21, when Democratic presidential candidates try to impress the locals with their organizational prowess.

The one remaining Coloradan in the presidential race now faces a reckoning.

COVER STORY | Blue State Blueprint: How Democrats are trying to build a national majority from the ground up

To Coloradans, the strategy looks familiar.

Who will stand out? With Bennet on sidelines, top 2020 Democrats face pivotal debate tonight

The Democratic primary has been remarkably static for months, but that stability is under threat tonight.

Bennet is looking for inspiration to Gary Hart, the patron saint of long-shot Democratic presidential candidates, who held the same Senate seat as Bennet for two terms in the 1970s and ’80s.

Another 1% for Bennet in WSJ/NBC presidential poll

The Journal/NBC News poll surveyed 506 registered voters who said they would vote in a Democratic caucus or primary.

Colorado's Michael Bennet — who campaigned in Iowa over the weekend with supporters holding a big gavel to make a point about pounding truth into the Democratic primary race for president — got pounded in a new poll of Iowa voters.

With $1.8 million on hand, the longshot candidate intends to stay in the race through February's Iowa caucus and New Hampshire primary running a "lean" campaign.

A dozen Democratic presidential candidates will meet tonight for the most crowded presidential debate in modern history -- but Colorado's Michael Bennet didn't make the cut.