Democrat Erik Underwood is suing to have his name added to the ballot for Colorado's primary election for U.S. senator, charging that he was denied a fair shot at the nomination after emergency rules were adopted by the party in the face of an exploding coronavirus epidemic.

Underwood, a former congressional staffer and gubernatorial candidate, rounded out the field in third place in the Democrats' state assembly on April 18, with 0.87% of the vote. He argues that the party's procedures "broke down" on multiple occasions leading up to the assembly, which was held almost entirely using online balloting.

"Our democracy has to be protected, and people need to know that when they vote in an official process their vote means something and is counted," he told Colorado Politics after filing a 20-page lawsuit in Denver District Court late Tuesday afternoon.

"All candidates were given the same set of rules to follow," state Democratic Party spokesman David Pourshoushtari told Colorado Politics. He declined to comment further.

Democratic state assembly delegates sent former state House Speaker Andrew Romanoff to the June primary ballot with 85.86% of the vote, making him the only candidate to surpass the required 30% threshold.

The other candidate who completed the caucus and assembly process, university professor Stephany Rose Spaulding, a former congressional candidate, received 9.02% of the vote.

Other candidates still in the crowded race to challenge Republican U.S. Sen. Cory Gardner have made the ballot via the petition process.

Former two-term Gov. John Hickenlooper learned in mid-March that he turned in more than the required 10,500 signatures, and a judge last week ordered first-time candidate Michelle Ferrigno Warren on the ballot, ruling that she gathered a sufficient number of signatures before her petition drive was hampered by the COVID-19 outbreak.

Colorado Secretary of State Jena Griswold has appealed the Warren ruling to the state Supreme Court, asking that the court set stricter standards than the ones the lower court judge formulated.

Another candidate, nonprofit executive Lorena Garcia, turned in about twice as many valid signatures as Warren but still came up short. She is asking a Denver District Court judge to issue an order similar to the one that put Warren on the ballot.

Underwood names Griswold as the defendant, since her office has the ultimate say in access to the primary ballot. The lawsuit includes a litany of examples Underwood says prove the party short-changed some candidates when officials switched nearly overnight from holding traditional, in-person assemblies to gatherings conducted remotely, mostly using various internet-based platforms.

Among the irregularities Underwood cites: a county party that appears to have supplied state delegate email addresses to one candidate while ignoring the others; delays in posting county assembly results to the state party's website, hindering the ability of candidates to audit the elections; a glitch in an online voting application that allowed delegates to vote more than once; and imprecise communication with Senate candidates about the videos they were asked to submit to replace speeches at the county and state meetings.

Underwood sounded particularly peeved about problems he ran into involving his video.

Following the party's initial guidelines, he said he produced a 5-minute video that featured him speaking in front of a portrait of Thomas Jefferson and a pair of flags, only to learn late in the game that some counties were limiting candidates to briefer videos.

During the El Paso County assembly, for instance, officers played the first 2½ minutes of Underwood's video before cutting it off and explaining to delegates, who were participating via an online conferencing application, that Underwood had provided a video twice as long as what they'd requested.

"Since no delegate is bound to a candidate, the purpose of the state assembly is to allow a candidate to make a case why that candidate should move forward in the primary process," Underwood said. "Candidates' speeches at state assembly are what it’s all about. Otherwise we wouldn’t have state assemblies. The state assembly is supposed to lay it out and be a fair process for people to change the hearts and minds of delegates to come their way, which historically has happened."

Underwood pointed to the 2016 GOP state assembly, where Darryl Glenn outflanked nine other U.S. Senate candidates — including Underwood, who sought the U.S. Senate nomination that year as a Republican — on the strength of a powerhouse speech, winning 70% of the vote and becoming the only candidate to emerge from the assembly. (Underwood received 6 votes at that assembly, or 0.16%.)

Other problems cited in Underwood's lawsuit included counties that conducted their U.S. Senate preference polls incorrectly, including one that attempted to cancel the poll altogether and another that included Hickenlooper's name among the candidates after the former governor had withdrawn from the assembly process. Other counties improperly left Underwood's name off their ballots, since he hadn't received any support at precinct caucuses, he said. 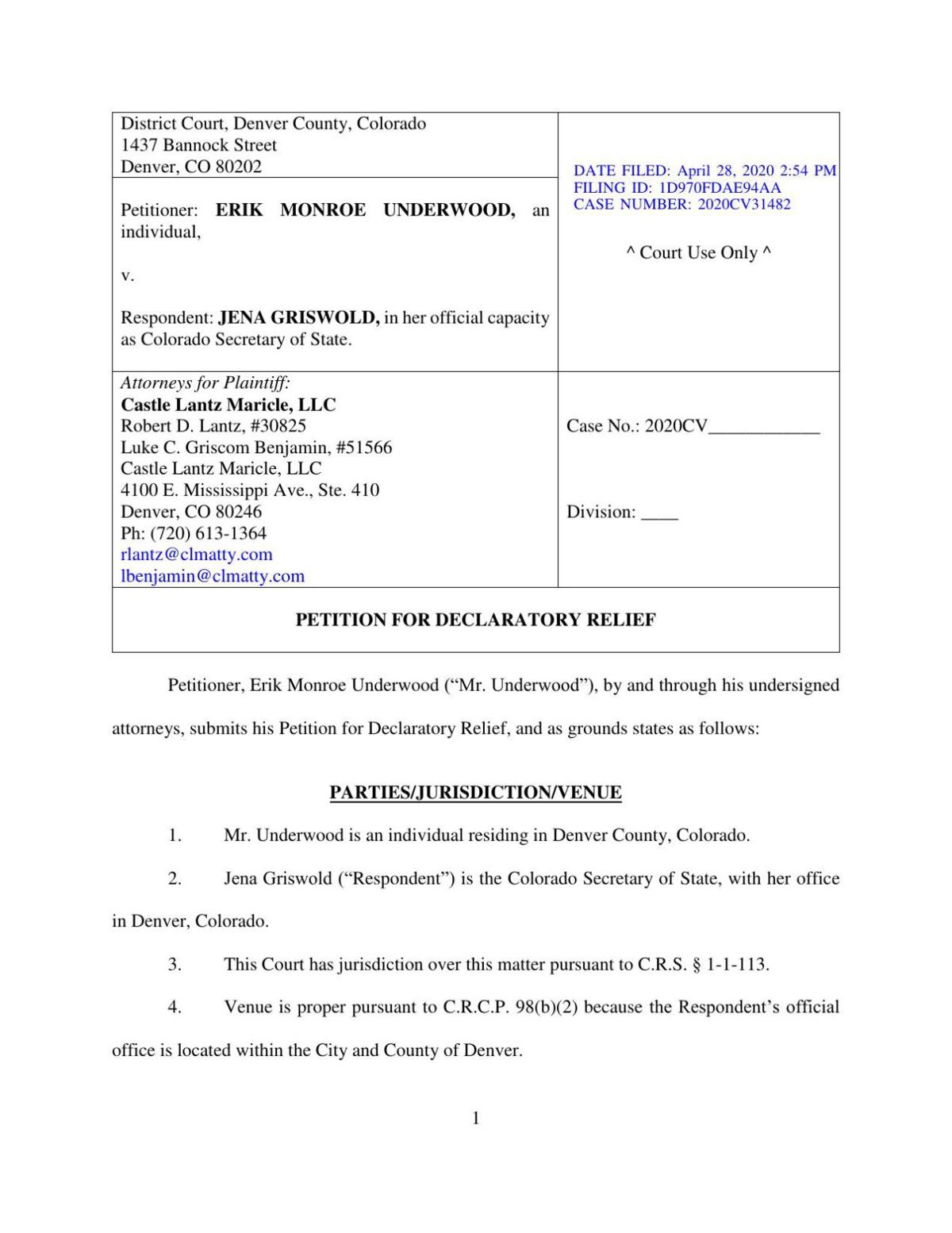 But the "smoking gun" that Underwood maintains proves the Democrats "rigged" the process is a complaint filed three days before the state assembly by Spaulding, alleging many of the same irregularities Underwood describes in his lawsuit.

"Based on the incidents outlined herewith, we contend that the overall legitimacy of the Colorado Democratic Party's state assembly to be tainted by practices and processes that have disadvantaged and discriminated against a multitude of candidates throughout the state," Spaulding wrote in an email to the state party's executive committee, which included the electronic signatures of 53 Democrats.

"Perhaps on their own, each incident may seem like a minute matter, but when layered together, the overall image is one of egregious lack of fairness and due process in the assembly process writ large," Spaulding concluded, adding that she was requesting "justifiable redress of the damage caused."

"I am unclear what redress you are seeking from the state party — other than creating bad press and ill will for us," Morgan Carroll, the state party chair, responded in an email obtained by Colorado Politics.

Noting that she was attaching a memo written by the party's attorney explaining why the Democrats couldn't lower the 30% threshold for putting candidates on the ballot, Carroll added that she was also "forwarding your complaint to the credentials committee, but it is unclear what is it you want? No assembly? A different assembly? A complete do-over?"

Carroll concluded by defending the party's conduct "even under COVID-19 pandemic conditions" and said she was "proud of our staff, proud of our officers, and proud of all the work and time our volunteers have put in to do their very best under these circumstances."

A party committee later told Spaulding that her email didn't qualify as a formal complaint under party bylaws, since it didn't challenge any particular delegates or point to specific instances of alleged wrongdoing.

That wasn't good enough for Underwood, who said he only learned about Spaulding's complaint after the assembly and believes that Carroll "swept it under the rug," including filing a statement on a form submitted to state election officials declaring that there hadn't been any challenges to delegate credentialing.

"They should have brought that to our attention," he said. "Even though there was no real assembly, you have to have due process."

Carroll declined through a spokesman to address Underwood's concerns, but a party official told Colorado Politics that Spaulding's email — and a follow-up — didn't amount to an official credentials challenge that would have warranted action or disclosure.

Spaulding told Colorado Politics that she decided against joining Underwood's lawsuit but shares his frustration with the process.

"What we are experiencing right now is evidence of the impact this public health crisis has had on our election system," she said. "We absolutely were not prepared for everything that came about because of it. It is not just impacting voters, it really is impacting candidates and the ballot access process."

She said switching in a matter of days from assemblies that candidates and the party had been organizing for more than a year "created the perfect storm" for unfair outcomes.

"I don’t want to say it is intentional, but that it is just human error," she said. "The pressure, the anxiety and the fluidness — all those three things together — even if country officers did not intend to be unfair, it was the impact."

She said there's still an opportunity for the courts to fix the situation, since the primary ballot doesn't have to be certified and sent to county clerks until May 7.

"The most equitable redress would be to put every candidate who desires to continue running and has declared by March 1 on the ballot, and have a primary," she said. "I mean that not just Democrats, because Republicans had issues as well. Every race, from the top of the ticket all the way down — put every candidate on the ballot, because the crisis was that impactful."

A spokeswoman for Griswold didn't respond to a request for comment.

Underwood also told Colorado Politics that Romanoff's overwhelming margin of support at the state assembly was suspicious, suggesting that the party at various levels must have put its thumb on the scale to boost the candidate.

"It was very strange and very odd," Underwood said. "I’m a student of history and certainly of politics. I knew an 86% landslide for one candidate was not right, there was something hinky about it." He added that he examined state assembly results over the last 20 years and didn't find any candidate doing that well in a contested race.

Underwood is right that top-finishing statewide candidates have been more evenly matched in recent state assemblies, but Romanoff's share of the delegate vote wasn't his only advantage among the three Democrats pursuing this year's nomination at the state assembly.

In addition to his political experience — Romanoff was first elected to the legislature 20 years ago, served two terms as the youngest state House speaker in state history after helping orchestrate a Democratic takeover of the General Assembly for the first time in decades, ran for the U.S. Senate in 2010 and was a Democratic nominee for Congress in 2014 — Romanoff held a commanding fundraising lead over Spaulding and Underwood heading into the state assembly.

Pollster Ciruli asks if the Democratic primary is a done deal

According to Federal Election Commission reports covering the first three months of the year, Romanoff has raised a total of $2.2 million since entering the race more than a year ago and had $800,000 on hand at the end of March. That's compared to the roughly $200,000 raised by Spaulding, with about $13,000 she had on hand, and just $488 raised by Underwood, with $614 in the bank at the end of the quarter. Underwood reported donating $22,000 to his own campaign, which went to pay for video production.