A majority of Colorado voters hold positive views of President Joe Biden but two-thirds of the state's Republicans think the 2020 election was "stolen" from former President Donald Trump, according to a new poll released Friday by a trio of Colorado-based Democratic firms.

The KOM Colorado Poll from Keating Research, OnSight Public Affairs and Mike Melanson shows 56% of Colorado voters say they have a favorable opinion of Biden, who completed his 100th day in office on Thursday, while 42% give the president thumbs down.

Biden's favorability has ticked up slightly and his unfavorably has dropped in the six months since the firms last surveyed state voters just before the November election, when candidate Biden polled at 53%-46%.

By even wider margins, voters say they like the sound of Biden's $2 trillion infrastructure plan — described in the survey as highways and bridges, broadband, replacing lead water pipes, modernizing the electric grid and investing in clean energy — along with a proposal to fund it by raising taxes on corporations, with 60% in support and 36% opposed. Voters support government funding to develop electric trucks and high-speed charging networks by nearly the same margin, 59% to 39%.

The poll of active Colorado voters was based on a representative sample of 528 surveys conducted online from April 20-26. It was paid for entirely by the sponsoring firms. The margin of error is plus-or-minus 4.3 percentage points.

Trump, who lost Colorado's electoral votes to Biden by about 13 percentage points, continues to be upside down with state voters at 39% favorable to 58% unfavorable, virtually unchanged from the Republican's position in late October.

While Colorado voters say by a greater than two-to-one margin — 61% to 28% — that Biden was the legitimate winner of the fall election, registered Republicans disagree, with 67% saying the election was stolen from Trump and just 21% saying it wasn't.

The partisan split on the question was striking, with 94% of Democrats and 64% of unaffiliated voters saying the election's outcome was legitimate.

“However, as we see in this poll and recently when the Republican chair of Colorado’s Congressional Redistricting Commission was removed from that post, election conspiracies are not a fringe view among Republicans in Colorado — and frankly that's dangerous for our democracy.”

U.S. Rep. Lauren Boebert, the polarizing first-term Republican from Colorado's 3rd Congressional District, "has made a name for herself, but not in a good way," Keating said in a memo describing the poll's findings.

The outspoken, ultra-conservative owner of a gun-themed restaurant in Rifle, unsurprisingly, isn't as well known as Biden or Trump, but 50% of state voters hold an unfavorable opinion of her, while just 28% view her favorably and 22% say they aren't familiar with her. 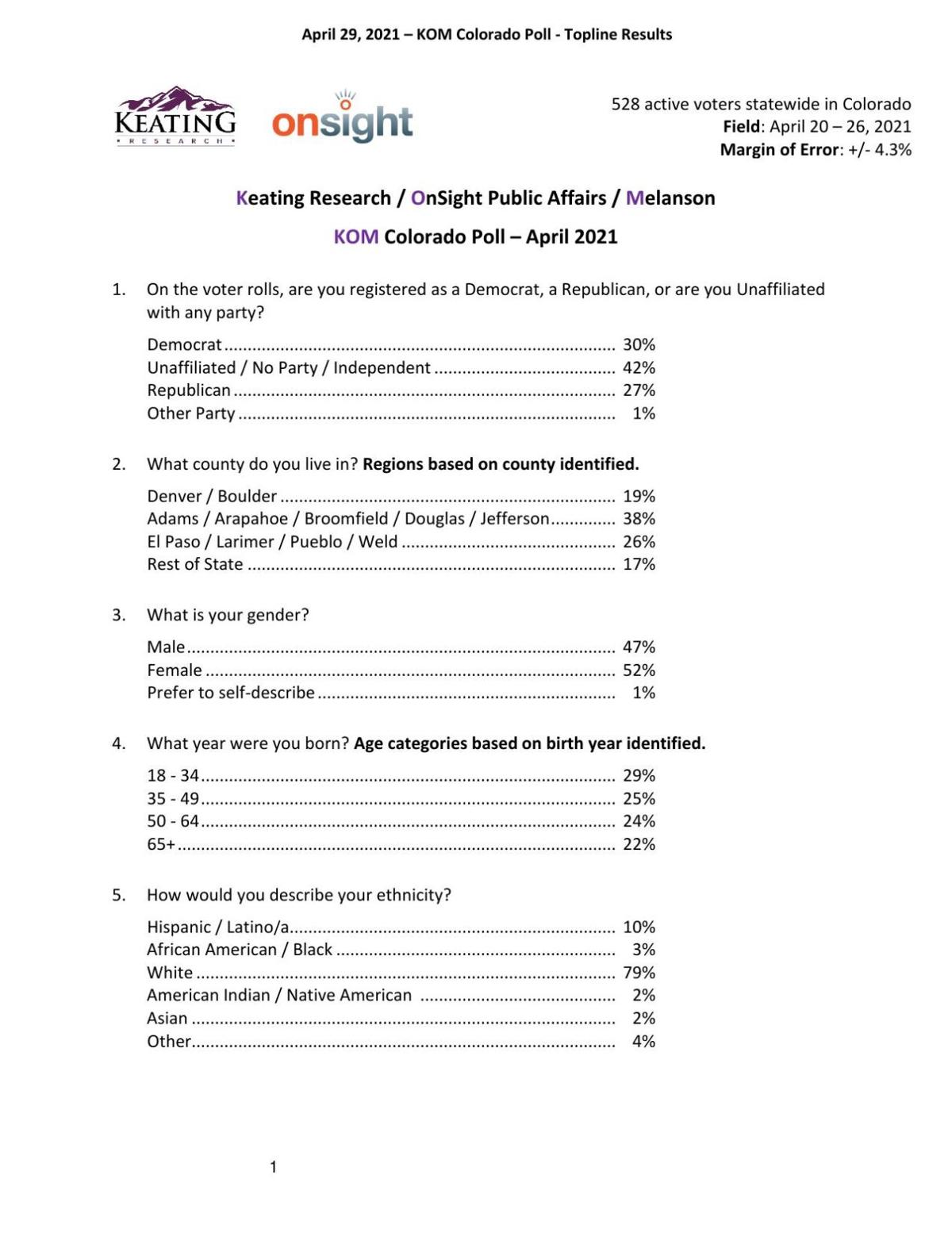 In the Republican-leaning 3rd CD's current configuration, covering the Western Slope, Pueblo county and parts of southern Colorado, Boebert fares better overall but is still underwater, at 45% unfavorable and 42% favorable, the pollsters said.

He's tied among men, with 49% holding each view, but comes out ahead among women, 61% of whom view the president favorably compared to 36% who hold an unfavorable view.

Among the crucial unaffiliated suburban voters, Biden finishes on top, 60% to 40%, and he gets positive marks from Hispanic voters by 69% to 31%.

Biden's first 100 days: Where he stands on key promises

Republicans of both sexes and all ages are the only demographic groups that agree with the unfounded assertion that the election was stolen from Trump, without much variation across the categories. Slightly more Republican women hold the opinion than men — 69% to 65% — and Republicans over 50 are somewhat more likely than younger Republicans to agree with Trump and his allies, at 68% for the older cohort and 65% for the younger ones.

Colorado voters sorted by every other available measure, however, reject the proportion that Biden wasn't elected legitimately. Aside from Democrats, who nearly universally dismiss Trump's position, younger women, unaffiliated voters, Hispanic and Latino voters, suburban women and residents of Denver or Boulder are least likely to say they think the election was stolen from Trump.

Polis briefed by HUD secretary on Colorado's aid for the homeless

Biden to the nation and world: 'America is rising anew'

WASHINGTON — President Joe Biden declared Wednesday night in his first address to a joint session of Congress that “America is rising anew," a…