John Hickenlooper would run away with the Democratic primary for Colorado's U.S. Senate seat, with more than six times the support of other candidates, says a poll commissioned by a group that supports the former two-term governor.

The Public Policy Polling survey released Tuesday found that Hickenlooper had the support of 60% of Democratic voters, followed by former state House Speaker Andrew Romanoff, with 9% support. None of the other candidates in the poll — including former state Sen. Mike Johnston, who exited the primary Tuesday — scored above 3% support, and 16% of respondents said they were undecided.

Hickenlooper ended his presidential campaign in mid-August and a week later joined the crowded field of candidates hoping to take on Republican U.S. Sen. Cory Gardner in next year's election.

Asked which candidate has the best chance of beating Gardner, 65% of the poll respondents said Hickenlooper, with Romanoff at 7%, former ambassador Dan Baer at 3% and the other candidates at 1% or lower. 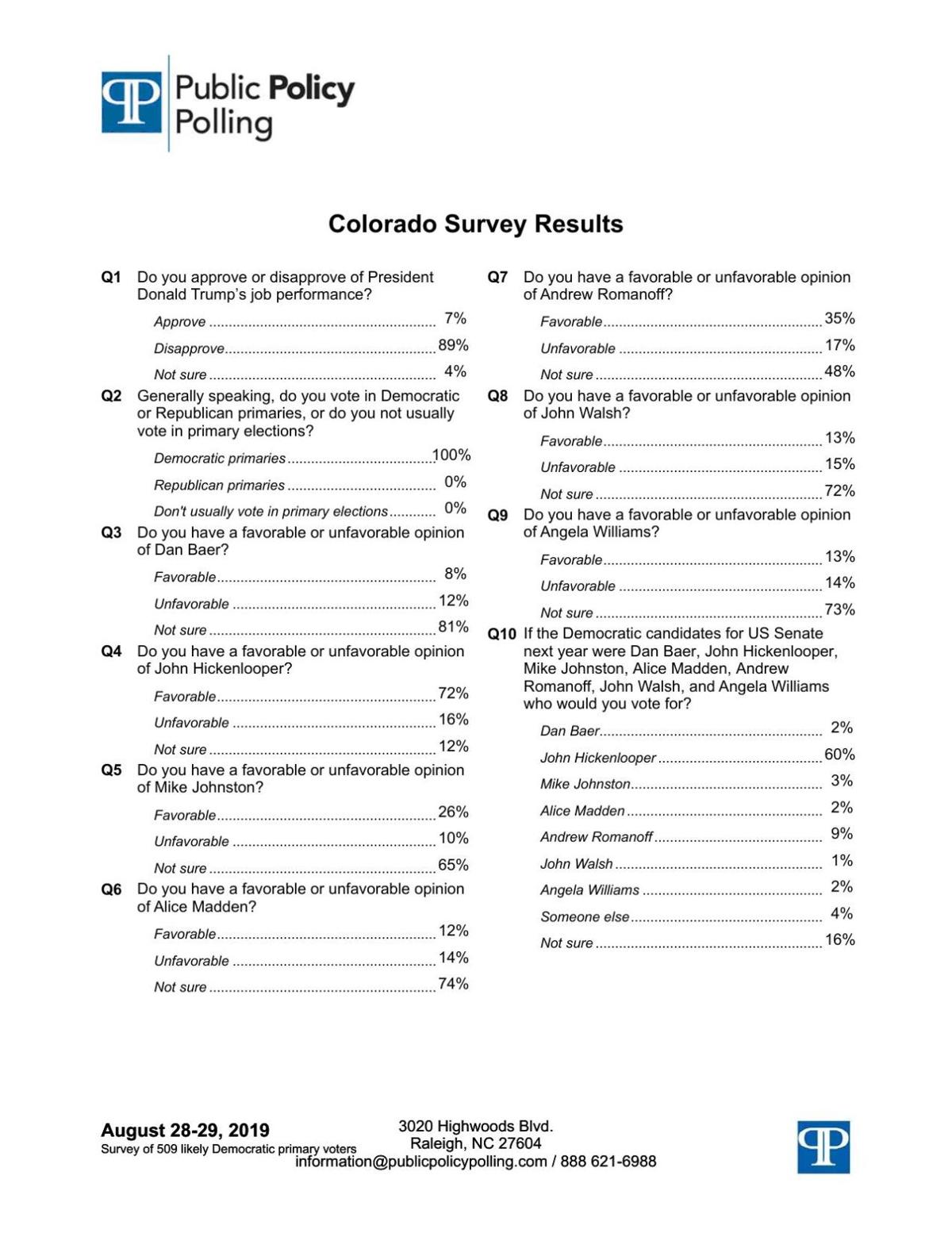 In all, 11 Democrats are running for the chance to challenge Gardner, one of only two Republican senators on the ballot next year in states won by Democrat Hillary Clinton.

The poll, conducted Aug. 28-29, was paid for by 314 Action, a Democratic group that works to elect scientists to public office and launched a campaign in early August to draft Hickenlooper, a geologist, into the Senate primary.

“Colorado Democrats understand that John Hickenlooper shares their values and is a proven champion of progressive ideas,” said 314 Action Executive Director Josh Morrow in a statement. “His strength in the primary is a reflection of his record as a progressive leader for Colorado.”

The poll shows that 71% of the moderates view Hickenlooper favorably, as do 72% of the progressives, with 16% in both groups holding an unfavorable opinion and 12% unsure.

In addition, 67% of Democrats surveyed said they think Hickenlooper has been "a progressive leader," while 18% thought otherwise and 16% were unsure.

While majorities of Democratic voters weren't familiar enough to form an opinion about most of the other candidates in the survey, only Romanoff and Johnston wound up with positive net favorability.

Romanoff was viewed favorably by 35% of the Democrats and unfavorably by 17%, with 48% unsure.

Johnston, who came in third in last year's gubernatorial primary, was viewed favorably by 26%, with 10% viewing him unfavorably and 65% unsure.

Despite having raised millions of dollars more than any other Democrats in the race, Johnston suspended his campaign Tuesday, saying he didn't want to run the expensive and negative campaign it would take to beat the popular Hickenlooper.

The others in the survey — Baer, former state House Majority Leader Alice Madden, state Sen. Angela Williams and former U.S. Attorney for Colorado John Walsh — all wound up slightly underwater on favorability, though more than 70% of Democrats weren't sure how they felt about any of them.

Hickenlooper won head-to-head questions against each candidate by wide margins, beating Romanoff 66%-17% in the closest contest and beating Baer 72%-11% in the match-up with the largest margin.

PPP surveyed 509 Democrats using interactive phone calls and over the internet. The survey has a margin of error of 4.3%.

President Donald Trump gets some of his worst marks from the American people when it comes to his handling of climate change, and majorities believe the planet is warming and support government actions that he has sometimes scoffed at.

His seat is topped on the publication's list only by that of a Democratic senator from the South.

Dan Baer is the latest Democrat to exit the primary following John Hickenlooper's entry into the race.