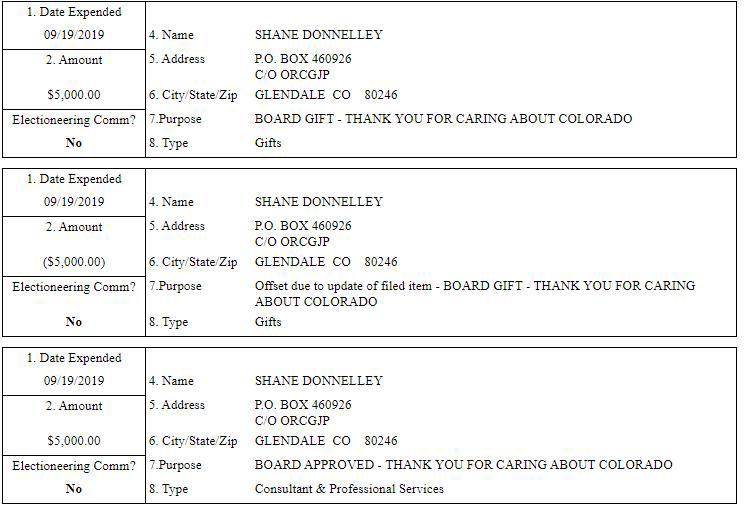 This screen shot shows an amended filing by the Official Recall Gov. Jared Polis committee, with the expenditure category changed from "gifts" to "consultant and professional services."

Refund requests posted in August to the Official Recall Gov. Jared Polis committee Facebook account. Filings with the Secretary of State show those refunds have not been issued as of Sept. 20.

The amended report from "Official Recall Governor Jared Polis" group -- filed at 4:15 p.m. Thursday, hours after CoPo's story was posted -- labels the purpose of those expenditures as "BOARD APPROVED - THANK YOU FOR CARING ABOUT COLORADO."

The previous filing identified the purpose as as "BOARD GIFT - THANK YOU FOR CARING ABOUT COLORADO." Other information about the payments was not changed.

The filings were made on the Secretary of State's TRACER campaign-finance disclosure website.

"Official Recall Governor Jared Polis" is one of a number of groups organized to seek donations for an effort to recall Polis.

Earlier Thursday, CoPo reported that the "Official" group filed a campaign finance report Wednesday with Secretary of State Jena Griswold's describing what it then called "gifts."

The report said the committee's manager, Shane Donnelley, had been given $5,000 and that board secretary Mona Lisa Pascoe and Weld County "lead" Renee McGill each had been given $3,000.

As of late Thursday, the group's revised filing listed those payments were for "consultant and professional services."

The "Official" committee's chair, Juli-Andra Fuentes, has not returned repeated calls for comment from both Colorado Politics and 9News, which also reported the payments to employees and board members.

Asked about the situation, Mario Nicolais, an experienced campaign finance attorney, told Colorado Politics Friday that the "Official" group's actions could leave it "unbelievably open to a campaign finance complaint. There are pretty defined things you can do with campaign contributions, but giving it to the people who ran it is not one of them. ... This is very unusual, given that they listed it as something else. It looks like recognizing their mistake but instead of fixing it they've doubled down on it."

There is no indication that "Official Recall Governor Jared Polis" actually worked on the effort to recall the governor, despite gathering funds for that purpose.

The recall effort against Polis was operated by two other groups unaffiliated with the "Official" recall committee. Those groups, Dismiss Polis and Resist Polis PAC, were unable to come up with the 631,266 valid signatures needed to put a recall on the ballot.

Those groups launched their recall attempt over objections to the governor's support for a national vote for president, a law allowing guns to be seized from people deemed a threat, and beefed-up state oil and gas regulations.

Former Dismiss Polis spokeswoman Karen Kataline said that in her view, the "Official" committee never showed any interest in recalling Polis or participating in the recall effort, despite repeated invitations.

"We never understood what their motives were," she told Colorado Politics.

In the past month, based on Facebook postings and a campaign finance complaint that was dismissed, at least three people have asked for their donations to be refunded by the "Official" group. The total donations made by those three people is $695.00.

The committee's Sept. 25 and Sept. 26 TRACER filings shows no refunds issued to any donor through Sept. 20, the last day of the most recent reporting period.  The committee reported it still has $14,164 in unexpended funds as of Sept. 25.

Its largest reported expenditure was $29,657 to Colorado for Trump, an independent expenditure committee set up by Fuentes, the chair of the "Official" committee.

According to the Trump campaign, “Colorado for Trump is in no way affiliated with Donald J. Trump for President, Inc. The campaign takes seriously any misleading or false use of President Trump’s name and will be taking appropriate action.”

One last petition effort, to recall Senate President Leroy Garcia of Pueblo, is still in progress. Those petitions are not due until Oct. 18.

“After all that fuss, I was pleasantly surprised that they didn’t turn in a single signature on the recall," Polis said in a statement.

Residents of a small town outside Denver want to recall their elected officials, saying they aren't doing enough to regulate growth.

The Pueblo Democrat noted that he won re-election last November with nearly 74% of the vote.

Polis recall group hands out $11,000 in contributions to board members, employees

A group established to seek donations for an effort to recall Gov. Jared Polis disclosed that it distributed $11,000 of contributions it received as gifts to employees and board members.