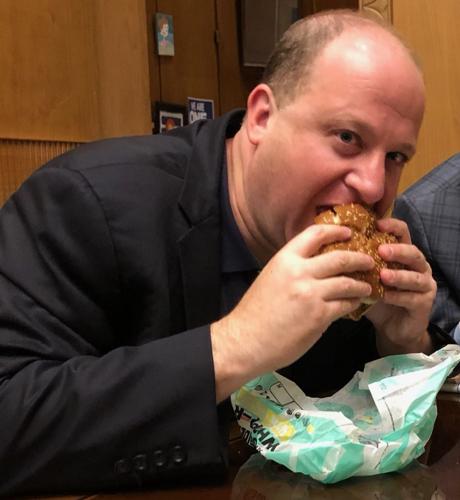 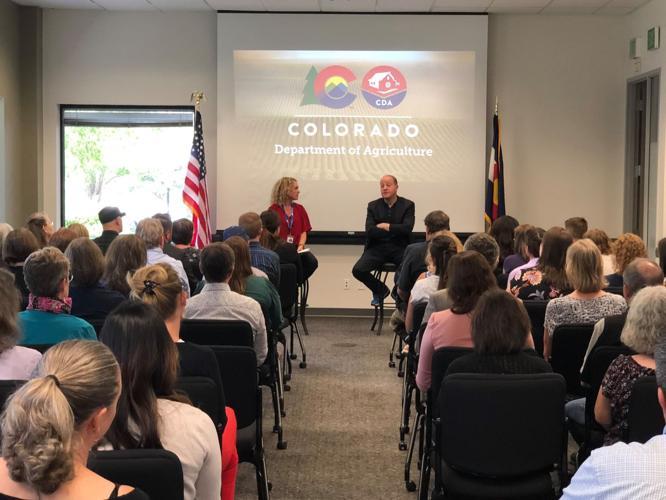 Gov. Jared Polis speaks to staff of the Colorado Department of Agriculture while touring the agency's new Division of Laboratory Services building in Broomfield on Tuesday.

Gov. Jared Polis speaks to staff of the Colorado Department of Agriculture while touring the agency's new Division of Laboratory Services building in Broomfield on Tuesday.

Gov. Jared Polis sees a future for Colorado with less meats and more profits, he said Thursday morning while dining on a Burger King Impossible Whopper in his office at the Capitol.

The Democratic governor — who eats meat but whose domestic partner is a vegan — caught the attention of state Department of Agriculture staff at a new lab in Broomfield this week when he asked them to think about going meatless.

He said he would buy an Impossible Burger for the roughly 100 employees at the research facility that opened this spring.

Polis discussed his thoughts on the subject over meatless burgers with Colorado Politics on Thursday.

His goal isn't to kill the livestock industry but encourage the agriculture staff and community to see the future, just as he says he's done with trends in marijuana, hemp, blockchain technology and heath care services.

"We want to make sure the future works for us across everything we do," Polis said.

Without specific directives, he asked the Department of Agriculture to start thinking about ways to include meatless products made with Colorado farm products as they go about their regular work.

"Everything that's in this was grown on a farm," he said between bites of his burger.

He also isn't suggesting marketing or legislation to affect a change in the marketplace, however.

The Impossible burger, for example, currently costs about a dollar more than a regular Whopper, but once it becomes more widely consumed and economies of scale kick in, beef could feel a hard pinch on its commodity prices, which will hurt farmers.

The Impossible Burger has no meat, but instead is made up of soy and potato proteins, with coconut and sunflower seeds for fat, along with binders.

He's not planning to bury beef, pork or poultry, but the tech millionaire says Colorado would be foolish to ignore the meatless trend that he expects will soon be an economic trend, as well.

Adapting to the market is critical in any endeavor, the governor said.

He said to think of Detroit, once a powerhouse city in the automotive industry that didn't adapt with the times and suffered through the economic tribulations.

The move isn't likely to go over well in some meat-loving sectors of Colorado.

"It makes my blood boil," said Republican state Sen. Jerry Sonnenberg of Sterling, a cattleman who sits on the Democratic-led Senate Agriculture and Natural Resources Committee.

He said Polis' declaration "escalates the war on rural Colorado," and it could drive more people in livestock-producing parts of the state to drive a recall petition currently underway against Polis.

"It just floors me that he would go to the Department of Agriculture, of all places, and say something like that," Sonnenberg said.

Livestock, of course, is big business in Colorado.

Beef — living, fresh or frozen — is by far Colorado's top export, ahead of electronics, medical equipment and aerospace products.

The U.S. Department of Agriculture reported that in January that Colorado was home to about 2.8 million head of cattle, about 750,000 hogs, and more than 430,000 head of goats and sheep.

Aside from being a vegan, the first gentleman, Marlon Reis, is an outspoken activist for animal rights.

"Being vegan is core to who I am, and the way I want to represent myself to the world, he told the website Mercy for Animals in February. "In my experience, the best persuasion is simply setting a good example. If you live according to your values and you accomplish good things, people will naturally wonder about what you are doing and be more willing to try it themselves.

"I’ve been vegan for 15 years after being a vegetarian for two, but prior to changing my diet, I felt out of alignment with my convictions. In my early 20s, I decided that I could no longer continue telling the world how much I love animals, then sit down to a hamburger for lunch."

A complaint filed with Colorado election officials suggests that funny business is happening in the effort to recall Gov. Jared Polis.

No word on if whether either was chosen for their state's chiles.

A look at the lighter side (usually) of life at the state Capitol.

The patience of many farmers with a president they mostly supported in 2016 is being put sorely to the test.

While it might have been a heaping helping of crow, it looked more like a 100% all-Colorado beef hamburger that Gov. Jared Polis chomped down on.