Gov. Jared Polis Thursday announced 2020 premiums for families who buy their own health insurance will drop by an average of 20.2% as compared to 2019 rates. 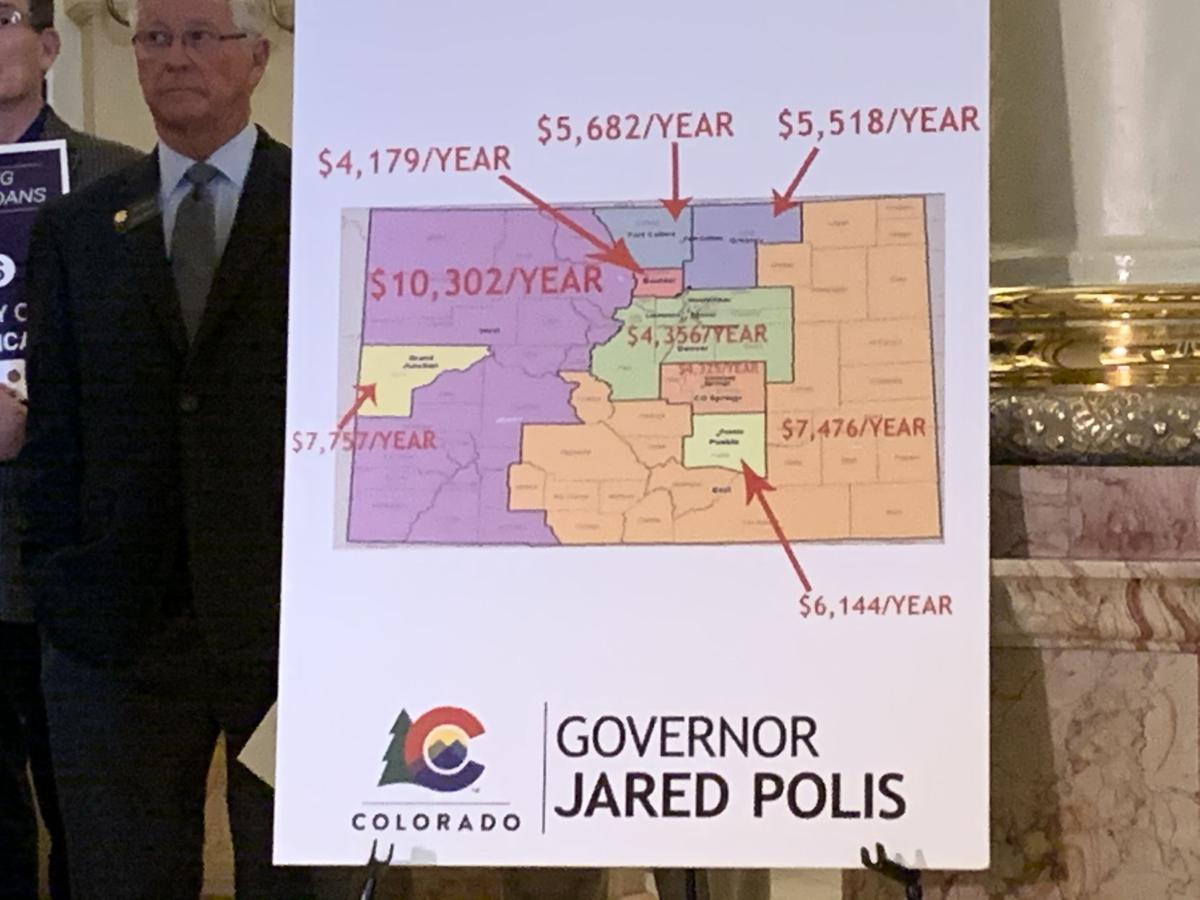 How much a family of four, who buys their own health insurance, will save in 2020, compared to 2019, under insurance rates announced Thursday.

Those who buy health insurance though the state's exchange will see an average premium cost decrease of 20.2%, Gov. Jared Polis said Thursday.

The same reductions will apply to those who buy individual insurance plans outside of the exchange, according to state insurance officials.

This is the first time the cost of health insurance plans offered through the state exchange, Connect for Health Colorado, has gone down in its six-year history, the governor said Thursday.

Insurance officials said deductibles will not change under the new rates. The rate reductions announced Thursday apply to the exchange's Silver plan, the mid-priced option.

Polis and state lawmakers attribute the decrease to the state's new reinsurance plan, a kind of insurance for health insurers that helps them handle high-cost claims. The reinsurance program was contained in House Bill 19-1168, passed by the General Assembly during the spring. It will be paid for primarily by hospitals, which could pay fees of up to $40 million beginning in 2020-21.

The reinsurance program will only operate for two years; after that, lawmakers and the governor are pushing for a state-developed insurance plan that private insurers would be required to offer in the individual market.

The individual market covers about 7-8% of all Coloradans. Polis said Thursday he hopes the lower cost of health insurance will encourage Coloradans who aren't currently insured to sign up, and added that it could drive down the uninsured rate in Colorado, although that won't be known until the open enrollment period is over.

This is "one of the reasons I ran for governor," Polis said in the Thursday news conference. Colorado modeled its reinsurance program after the best practices of other states, and the plan won approval from the federal Center for Medicare and Medicaid Services on July 31.

The 20.2% reduction in health insurance rates in the individual market is larger than was initially projected when the bill passed last May. At that time, lawmakers and the Polis administration had projected a 16% drop.

Polis also said that lowering rates in the individual market should bring down health insurance premiums elsewhere, but that won't happen for 2020. According to Vince Plymel, spokesman for the Colorado Division of Insurance, rates in the 8 group market (that's employers with 2 to 100 employees) are expected to climb by about 7.8% for 2020, in line with the average increases over the past few years.

The program "addresses the urban-rural divide," said Republican state Sen. Bob Rankin of Carbondale, one of the HB-1168 sponsors.

"This will have a lot of effect on young families," he said, noting that people in his Senate district in northwest Colorado pay 50% more for health insurance than those in urban areas.

"This is what good government is all about," added Democratic Rep. Julie McCluskie of Dillon.

Steven Summer, CEO of the Colorado Hospital Association said in a statement that the new rates show a clear indication of "the efforts hospitals are making to reduce the cost of health care. ... Colorado hospitals have been working for years to improve affordability in the state through a variety of efforts — including increasing price transparency, advancing patient safety and quality, decreasing inpatient utilization when appropriate, and expanding outpatient options so care is provided in the most cost effective way."

Summer said "insurance premiums are only part of the health care affordability story. The next step is to work on a more sustainable program targeting the total cost of care," part of the effort driving the formation of a public option in Colorado. A 196-page draft report on that effort was released earlier this week.

The news of the new insurance rates comes as some counties will see fewer options for individual health insurance. The Division of Insurance said the number of Colorado counties with only one insurer will increase from 14 to 22 counties for 2020. Kaiser and Friday Health Plans both have announced they will stop offering individual plans in some counties; for Kaiser, it's five counties on the Western Slope; Friday is dropping six counties in northeastern Colorado.

However, one insurance carrier is coming to Colorado for the first time in 2020, Plymel said after the news conference. That's Oscar health plans, which will debut in the Denver market with the potential to expand beyond.

"With the kind of stability brought about by the reinsurance program, we can get some of the existing carriers to expand their footprint," he said.

People in crisis often turn to a religious institution for help. But is it enough?

A Colorado doctor fired after tying to help a terminally ill man obtain drugs to end his life has filed an updated lawsuit that challenges her firing by a Christian hospital company.

April Christensen: "It is not unusual for rural patients to drive hours each way from their farms or ranches to a clinic to get their treatment. ... And cancer patients may have to make this trip a few times per week."

The Polis administration unveiled a proposal that would require private insurers to offer a state-run plan for those who pay for their own health insurance.

Brilliant.. Pass Obamacare, make premiums skyrocket and benefits/value plummet.. then use taxpayers money to subsidize the premiums so they are "lower"..What a scam! GET THE GOVERNMENTs ALL OF THEM out of my life!!!!!!