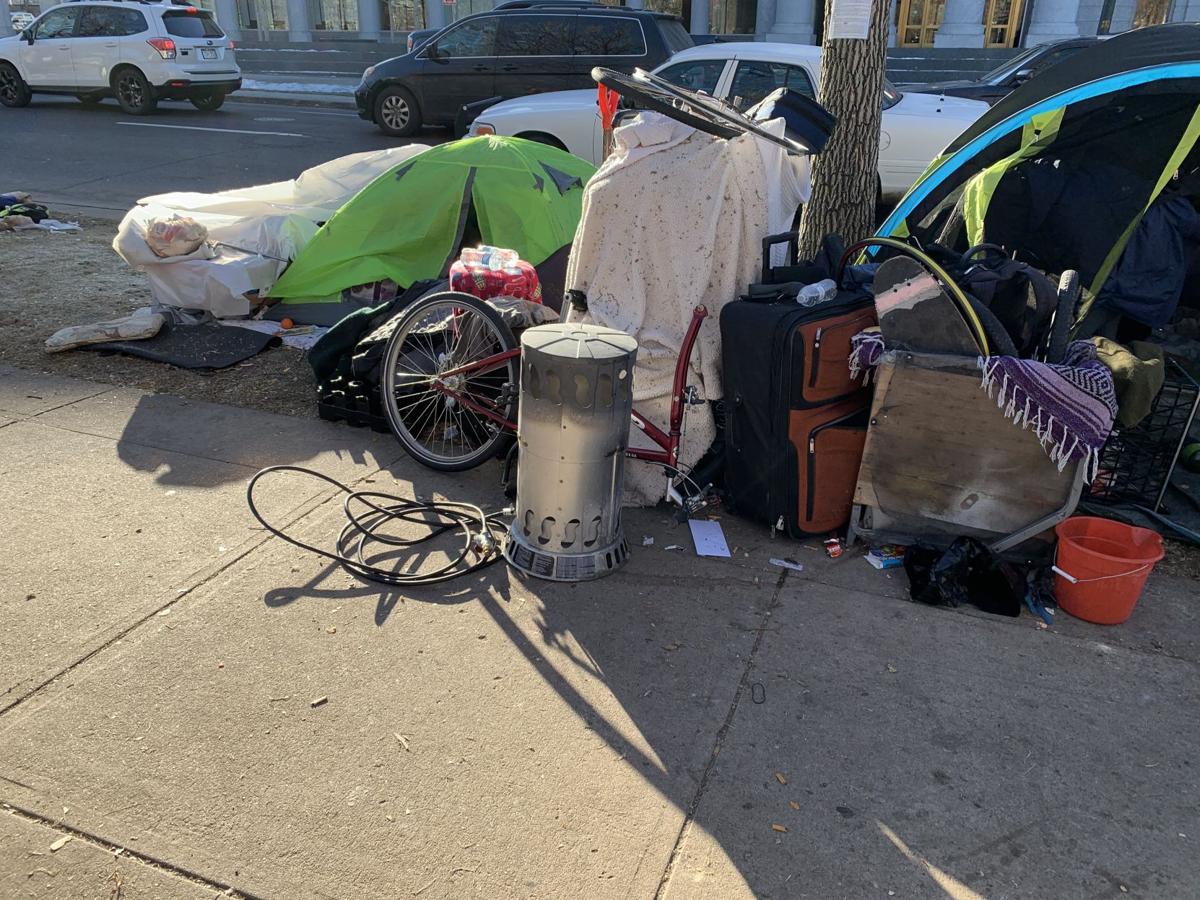 A heater, one of the many devices used by those camping in Liberty Park to keep warm. Propane tanks and candles also were found in the park during the Jan. 15, 2020 sweep of the homeless encampment. 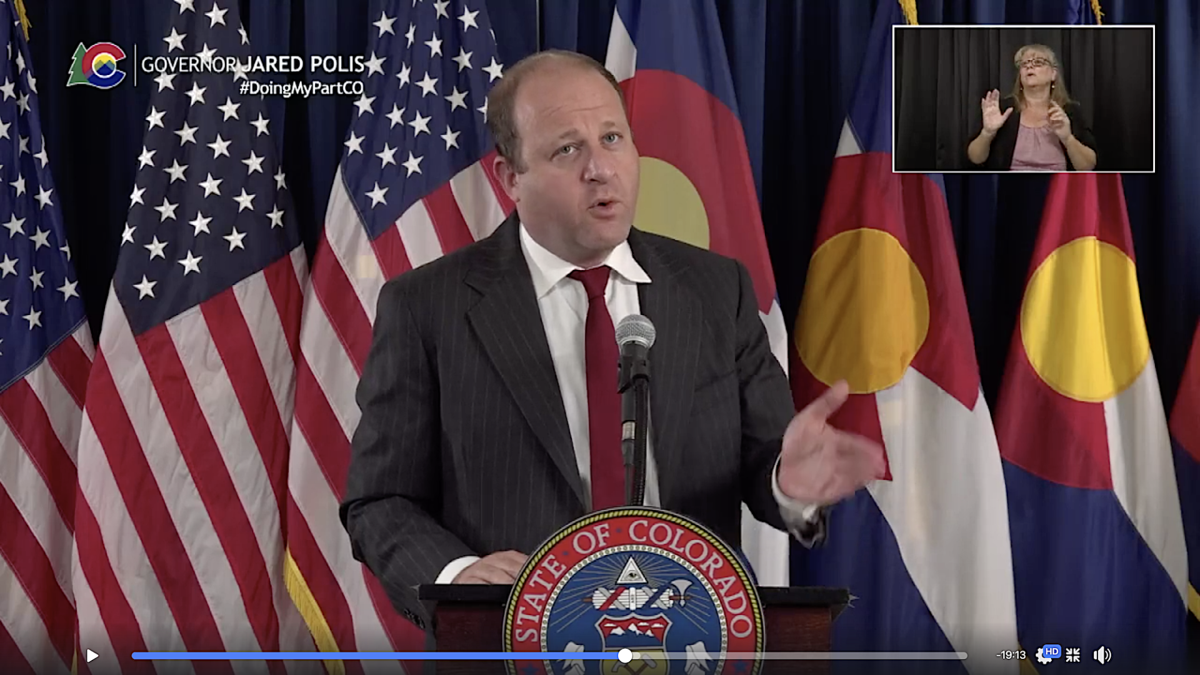 Gov. Jared Polis speaks about the coronavirus pandemic and homeless camps near the state Capitol in Denver at a press conference on July 23, 2020.

A heater, one of the many devices used by those camping in Liberty Park to keep warm. Propane tanks and candles also were found in the park during the Jan. 15, 2020 sweep of the homeless encampment.

Gov. Jared Polis speaks about the coronavirus pandemic and homeless camps near the state Capitol in Denver at a press conference on July 23, 2020.

Whether the blame Gov. Jared Polis leveled at the city of Denver over homelessness Thursday exposes a rift with the mayor was an unanswered question Friday.

Polis was asked about the encampments on state Capitol property and near the governor's mansion Denver during his regular coronavirus media briefing.

He said it was the city's job to enforce the law.

Denver Mayor Michael Hancock sent a message on Wednesday to a group of council members who, in late April, had written to him requesting a temporary “Safe Outdoor Space” for people experiencing homelessness during the coronavirus outbreak.

“They are welcome to come onto our property and remove tents,” he said. "They're not only welcome, I would encourage them to do so."

Polis has weathered criticism from the right over the damage to the Capitol and the slow cleanup following nationwide protests — deemed riots by their opponents — related to the death of George Floyd, a Black man killed by police in Minneapolis on May 25.

"I thought Denver voters voted for the camping ban, but it seems like maybe they didn't," Polis continued. "I don't follow Denver politics."

You can watch that press conference by clicking here.

Denver residents voted overwhelmingly against overturning the city ban on urban camping last year, 145,649 to 33,685. The ban also was a central issue in Hancock's reelection campaign.

In December, however, Denver County Court Judge Johnny Barajas ruled that the camping ban was unconstitutional, violating the Eighth Amendment that prohibits "cruel and unusual punishment" and the 14th Amendment's equal protection clause, due process clause and the Americans with Disabilities Act.

A month later the city reportedly resumed enforcing the ban while the case is on appeal.

Colorado Politics tried, unsuccessfully, to talk to Hancock and Polis after the apparent tiff between the normally chummy Democrats Friday.

"The Governor greatly values the partnership with Denver on a host of issues facing Colorado from fighting the COVID virus, economic development, and our shared stewardship of our capital," a spokesman for the governor said in an email Friday evening.

A spokesman for Mayor Michael Hancock said the two meet weekly, and, as far as he knew, continue to work in a cooperative spirit.

Persistent issues, such as homelessness, are getting a more critical look under the strains of the pandemic, said Hancock's spokesman, Michael Strott.

"We're in interesting times," he said. "A lot of the same issues we've always been dealing with have a bigger spotlight on them now."

The rift is whether state government is in the way of city government enforcing Denver's urban camping ban, or whether the city isn't doing a good enough job — or any job — enforcing it on state Capitol grounds or near the governor's mansion.

That was not more clear on Friday.

"It's not that simple to just move people in a pandemic," Strott told Colorado Politics on Friday afternoon.

Councilwoman Candi CdeBaca, who often clashes with Hancock, stepped in to defend the city in a statement late Friday afternoon.

"I have never once been contacted by Governor Polis, even after several attempts to meet with him regarding a range of issues," she said. "He sends staffers and does not meaningfully engage with our office.

"Additionally, it makes no sense for the governor to 'ask' (the) City Council, in a state where he is the top official, to do something about homelessness. It bears noting that thousands of petition signers begged the Governor to freeze and or cancel rent. When leaders with executive power during a global emergency abdicate their duties to protect such basic needs as housing in a city that already was number two in the nation for displacing people, you will get more homelessness. So for the sake of those already harmed by failed leadership and policy, let's stop playing hide the ball and talk about what each branch of government can do to address the highest amount of homelessness we've had in our city in decades."

Jon Caldara: "Jared Polis is caught between a rock and an antifa place."

Data from the Denver metro area’s annual 24-hour count of people experiencing homelessness will be released this week, according to Matt Meyer, executive director of the Metro Denver Homeless Initiative.

In the coming days, Hancock said the 24/7 auxiliary shelter located in the complex’s Hall of Education will open with capacity to house up to 600 men, and the Denver Coliseum is also being prepped to shelter more than 300 women and transgender individuals.

Denver Councilwoman Candi CdeBaca has become a lightning rod for controversy since she was elected last summer, taking on private prisons, bans on where the homeless can sleep, even the tone of civility that is a tradition in City Council meetings.

After months of complaints from nearby residents, the city disassembled the encampment ringing Morey Middle School in central Denver on Wednesday.