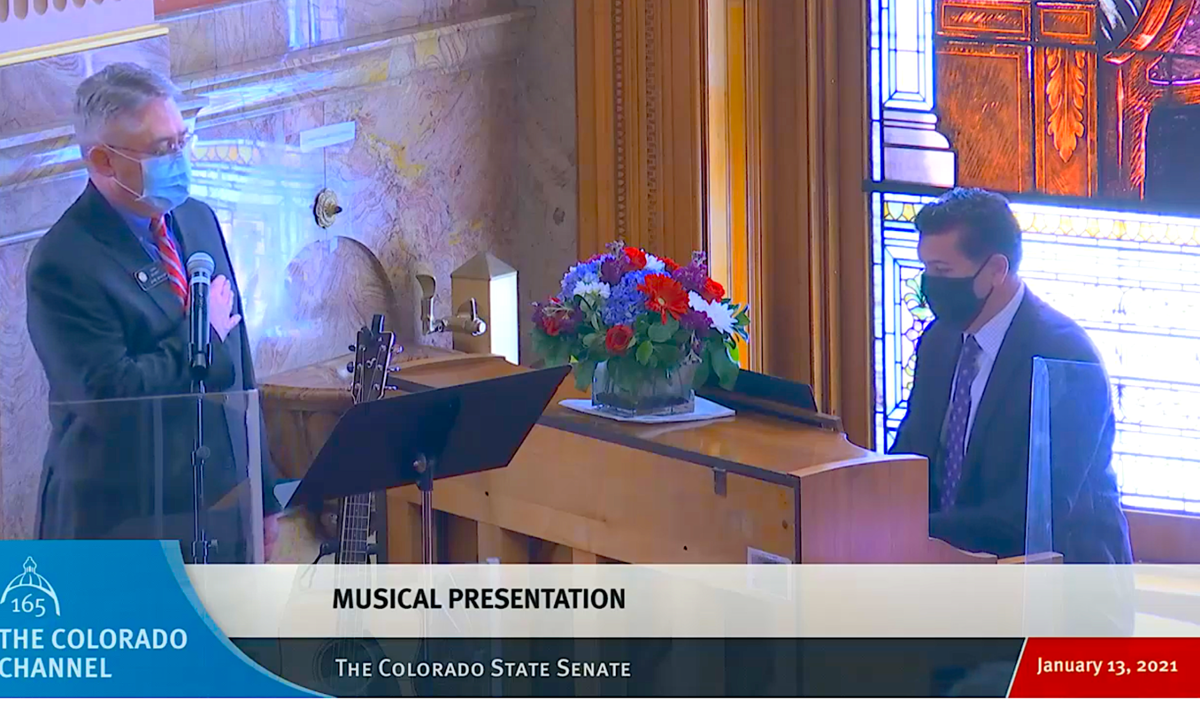 Senate Republican leader Chris Holbert of Parker, left, leads the singing of the national anthem with piano accompaniment from Senate President Leroy Garcia,  a Democrat from Pueblo, to commence the 73rd General Assembly at the state Capitol in Denver on Wednesday, Jan. 13, 2021. 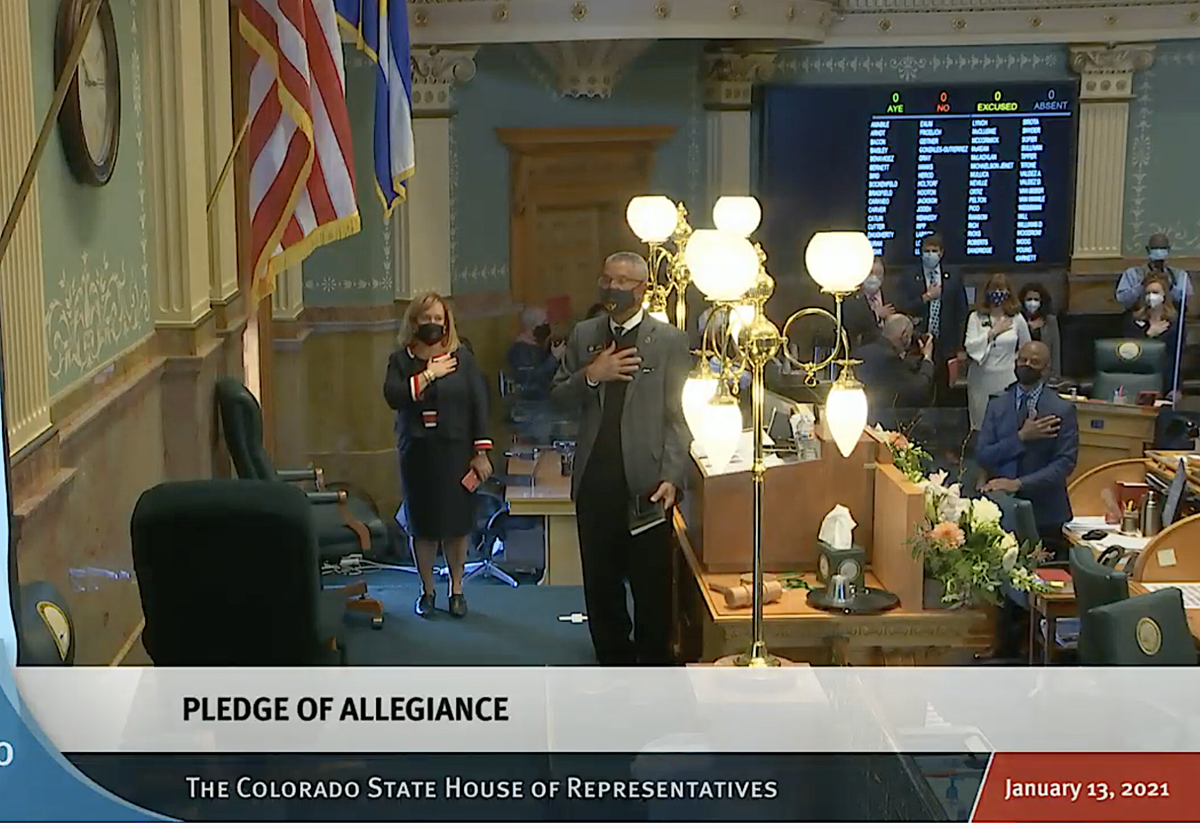 State Rep. Tony Exum Sr., a Democrat from Colorado Springs, leads the Pledge of Allegiance in the House chamber with outgoing House Speaker KC Becker as the General Assembly gathered at the state Capitol on Wednesday, Jan. 13, 2021, to kick off the 120-day legislative session.

Senate Republican leader Chris Holbert of Parker, left, leads the singing of the national anthem with piano accompaniment from Senate President Leroy Garcia,  a Democrat from Pueblo, to commence the 73rd General Assembly at the state Capitol in Denver on Wednesday, Jan. 13, 2021.

State Rep. Tony Exum Sr., a Democrat from Colorado Springs, leads the Pledge of Allegiance in the House chamber with outgoing House Speaker KC Becker as the General Assembly gathered at the state Capitol on Wednesday, Jan. 13, 2021, to kick off the 120-day legislative session.

Colorado's legislative leaders said they would preserve their vision for the future of the state until the pandemic and political crises have waned, as the 100-member General Assembly reconvened Wednesday in Denver.

"Now more than ever in an economy so controlled by executive orders from the executive branch, we should stand opposed to increasing the burden on working men and women of Colorado," the upper chamber's minority leader said, referring to Polis and the power he's wielded by fiat during the COVID-19 emergency.

Nonetheless, he thanked Polis and his staff for their "endurance in these unprecedented times."

He said lawmakers need to talk about the balance of power before the next emergency, however, no matter how uncomfortable it might prove to be for the current governor.

Holbert said "blue-sky promises" by majority-holding Democrats would not be fulfilled as a result, and voters haven't been generous with passing new taxes.

He said a decade of prosperity had turned the General Assembly into gluttons before the virus-fueled economic crash.

"If the COVID-19 pandemic has taught us anything, it's how abundance in the best of times must be appreciated," he said.

The legislature is expected to adjourn after Friday and return for pomp, circumstance and the business of running state government on Feb. 16.

"This doesn't feel like the opening days we're used to," said new House Speaker Alec Garnett, a longtime Democratic leader from Denver, stating the obvious amid the masked and plexiglass-partitioned lawmakers.

He said only the most pressing matters and constitutional responsibilities are on the agenda this week.

Lawmakers paused their session last March as the deadly virus spread across the country. They came back in May, then returned again after Thanksgiving to work on a relief package.

Legislators are working under the threat of armed conflicts at statehouses and government offices across the country, as an encore to the Jan. 6 riot at the U.S. Capitol that caused five deaths from injuries or medical emergencies in the melee and the Saturday suicide of a Capitol police officer who responded to the rioting that ransacked the Capitol and threatened members of Congress and Vice President Mike Pence.

That prompted Garnett to say he hoped lawmakers would join him as a steward of democracy privileged to serve their community.

He said he would try to live up to the standard of House leaders who came before him.

"I look forward to being the speaker for everybody, not just one side of the aisle," he said in his opening remarks, promising his door would always be open. "... And those who know me know I'm true to my word."

INSIGHTS | It’s time to rethink how the sausage is made

Joey Bunch on the legislative session, which starts this week: "Much of this pomp and circumstance is a stage production taxpayers are underwriting, whether they care to watch or not."

House Republican leader Hugh McKean of Loveland spoke off the cuff to the chamber, calling for cooperation on both sides.

"The majority gets their way," said the GOP leader, setting up a political axiom. "But the minority gets a say, and you're going to find that's actually the truth."

McKean said the oath to the U.S. Constitution applied to all the lawmakers.

"But the things that bind us are so much stronger."

He spoke to the value he sees in every lawmaker, regardless of party.

"I don't care if my counterparts belong to a different party," he said. "I care that they are here to represent their constituents. I care that we are here to shepherd the state of Colorado through one of the hardest times this state has ever seen."

McKean pledged to respect those he would disagree with as much as he would challenge their proposal if he thinks there's a way to make a solution better.

He urged his fellow lawmakers to show love for their state, respect for one another and an appreciation of the institution they're fortunate enough to be part of.

"What we get to do is put our brand on this little moment in time," the minority leader said.

Senate President Leroy Garcia, a Democrat from Pueblo, also spoke to the urgency and strife of the times.

"People’s jobs have disappeared, their life savings bled dry, and their lives thrust into a seemingly endless barrage of tragedy and unrest," he said of the pandemic's economic and political challenges. "We have seen small businesses suffer, devastating — often unrecoverable — damage, our kids turned victim to an ever-changing learning schedule and environment, as well as a storm of mental health issues resulting in increased suicide and overdose deaths.

"And in the midst of all this heartbreak, we have watched a president and his enablers cause unimaginable destruction to our democracy — sowing lies and distrust into the minds of vulnerable people and ultimately radicalizing them to engage in violent and seditious behavior."

But legislative leaders will "play it by ear" on that return date, based on the data on COVID-19 infection rates available at that time, according to Senate Majority Leader Steve Fenberg of Boulder.

Garcia reminded lawmakers that the fights of D.C. don't belong in Denver.

"Colorado is not Washington D.C.," he said in his address to the chamber. "We are independent, forward-thinking problem-solvers that refuse to allow party affiliations to turn us into mindless soldiers of myopic ideologies."

Senate President Leroy Garcia of Pueblo, a paramedic by trade and a Marine veteran, will begin his third year as president dealing with an unprecedented pandemic and mountains of need for Coloradans.

Garnett, D-Denver, will enter his fourth and final two-year term on Jan. 13, then immediately hit the pause button, recessing the House of Representatives until at least mid-February when coronavirus infections will hopefully be lower and more Coloradans will have received inoculations. He intends to spend that break thinking about additional changes to safety protocols.

Holbert said all Republicans want is a voice in the big decisions, and chance to have some say in how bills are written and how many is spent, long before the ink dries.

Colorado Republican House leader Hugh McKean said a legislator is a lot of things: a profess…

House gets to work broadening language for minority-owned businesses

Facing a lawsuit by limiting the relief funds to race-based criteria, the wording stood to tie up money elsewhere in the package. As a fix, the legislature is adding "disadvantaged" and "disproportionally impacted" businesses to the language.