Mesa County's elections office has fired an employee allegedly involved in a security breach that later led to a court barring Mesa County Clerk and Recorder Tina Peters and a deputy clerk from participating in the recently-concluded November elections.

Bantz confirmed to Colorado Politics that Brown was terminated.

According to the Peters news release, Brown intends to sue for unidentified civil rights violations.

While the Peters release didn't identify a reason for Brown's firing, a lawsuit filed Aug. 30 by Griswold claimed Brown and Peters "facilitated the improper presence of the individual identified as Gerald Wood at the May 25 trusted build."

According to a series of emails obtained by the Washington Post, Belinda Knisley, the deputy clerk, asked the county on May 14 for an email address for Wood, identifying him as a temporary employee. Knisley also asked that Wood's email access should be at the same level as Brown’s.

On May 18, Brown emailed the Secretary of State’s office to notify them that she, Wood and Peters would be involved in the “trusted build,” an installation of software on voting equipment. Wood was identified in the Brown email as an administrative assistant.

But Wood was never an employee of the Mesa County clerk’s office, according to the lawsuit Griswold filed against Peters. 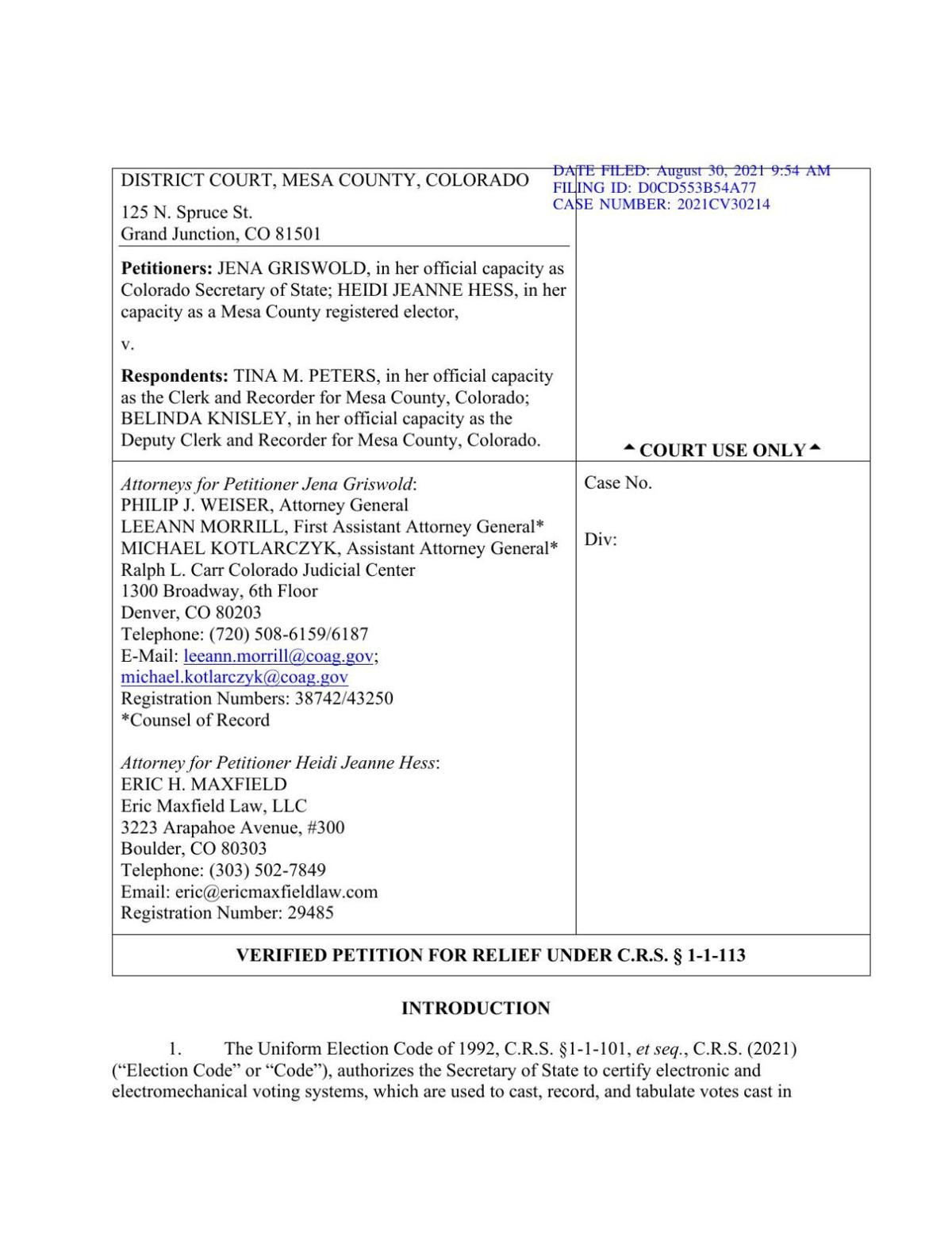 That lawsuit said the clerk and recorder must ensure that only authorized employees who have passed background checks are allowed access to the trusted build to maintain security of the process.

The lawsuit said prior to the trusted build, Peters asked the Secretary of State's office that a third party be allowed to observe the installation, which was denied.

The FBI and Dan Rubenstein, the 21st Judicial District Attorney, are investigating the alleged security breach with assistance from the Colorado Attorney General, according to the lawsuit.

Griswold's lawsuit resulted in the courts removing Peters and Knisley from their responsibilities for the Nov. 2 general election. Former Secretary of State Wayne Williams, now a Colorado Springs city councilman, and Mesa County Treasurer Sheila Reiner, formerly the Mesa County clerk and recorder, ran the Nov. 2 elections instead. Williams told Colorado Politics his court-ordered role will continue through next week’s risk-limiting audit and a hand count, with hopes that count will be completed by Dec. 17.

The extra steps are being taken to ensure Mesa County voters that the election was properly run and results are accurate.

Brown intends to sue, according to the Peters news release.

“Denver attorney Mike Melito, who is coordinating the defense of Ms. Brown, promised a lawsuit will immediately be filed against Mesa County and Jena Griswold as Ms. Brown's civil rights have clearly been violated in this blatant retaliatory measure against Ms. Brown for working with Clerk Peters to investigate the validity of the county elections," the news release said. “Bantz made it clear in her letter that this termination was a result of Democrat Secretary of State Jena Griswold banning Ms. Brown from participating in Mesa County elections.”

In the news release, Peters called Brown a professional elections manager with an "exemplary record and spotless history within the Mesa County government.”

It neither said why Brown was fired nor mentioned her role in Wood's involvement in the trusted build, or that she had been barred from participating in the division's operations for the Nov. 2 election.

Knisley was also suspended with pay on Aug. 23 for creating a hostile work environment and barred from returning to the office while investigations are ongoing.

But she did return, two days later, and attempted to print documents. She was later charged with felony burglary and a cybercrime misdemeanor by the 21st Judicial District Attorney.

The Elections Division of the Secretary of State is suing Peters for failing to follow state campaign finance laws, including accepting contributions in excess of legal limits, failing to report campaign contributions and failing to file as a candidate for re-election.

Republican David Winney has withdrawn from the GOP primary for Colorado secretary of state and thrown his support behind Mesa County Clerk Tina Peters, her campaign announced Monday.

The Secretary of State's Office announced on Monday that it's investigating a second complaint alleging campaign finance violations by Mesa County Clerk and Recorder Tina Peters.