Colorado Springs Mayor John Suthers said at his State of the City address Thursday the community has proved resilient when it faced the potential for economic collapse. 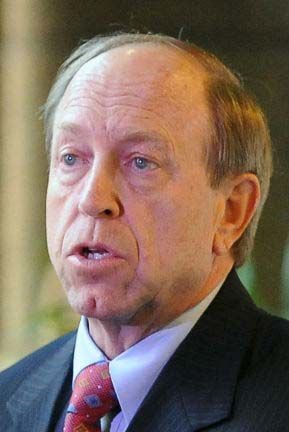 Colorado Springs Mayor John Suthers said at his State of the City address Thursday the community has proved resilient when it faced the potential for economic collapse.

Mayor John Suthers said at his State of the City address Thursday the coronavirus pandemic and stay-at-home order set up Colorado Springs for a potential economic collapse, but the community has proved resilient and its recovery is among the best in country.

Suthers celebrated the community's successes during his online speech including record levels of construction in town, strong tourism in late summer, strong sales tax revenues in June and July and largely peaceful Black Lives Matter protests. The community also controlled a second spike in COVID-19 cases without shutting down the economy, he said.

The community has not been immune to the fallout from the virus. The local unemployment rate increased from 3% to 12.6% in 45 days and airline traffic in town declined by 90% at one point, Suthers said. But the community recovery has been strong, he said.

"We had all the ingredients of a complete economic collapse. But that's where resiliency took over," Suthers said.

Residents deserve credit for abiding by health orders, social distancing guidelines and the statewide mask mandate, he said. The cooperation of citizens helped businesses reopen earlier and control a second spike in cases, he said. While Colorado Springs is 12.5% of the state population, the community has seen a smaller proportion of the statewide COVID cases, hospitalizations and deaths, he said.

While the community is still recovering from the virus, it has a promising future ahead, in part because the community has seen unprecedented levels of private and public investment. For example, the U.S. Olympic and Paralympic Museum and the Hybl Sports Medicine and Performance Center both opened this year and new indoor and outdoor downtown sports venues are in progress. The bonds to fund the new visitors center at the Air Force Academy are expected to be sold this year to pay for construction. It was the only City for Champions project to be set back by the coronavirus.

Along the Interquest Parkway, a $1 billion in new projects are planned, including the new ENT Credit Union headquarters and Scheel's Sporting Goods, both expected to open in 2021, he said.

Becoming the permanent home for U.S. Space Command is also a key priority for the city and the staff are focused on making a strong bid, he said.

The city is also successfully tackling some of its biggest social issues including affordable housing and homelessness, Suthers said. There are currently 600 units under construction in El Paso County and another 1,100 are planned he said.

The community is now providing 750 shelter beds, which is proving to be more than enough, he said.

"If you are in need of shelter in our community, there is a safe place for you," he said.

Suthers closed his remarks by reminding citizens that it is their time to overcome challenges just as their predecessors did.

"We must never forget and think of history only in the past tense and lose sight of the fact that we are presently engaged in the task of making it," he said.

Colorado Springs Mayor John Suthers delivered his State of the City address to business and community leaders in the city Thursday.