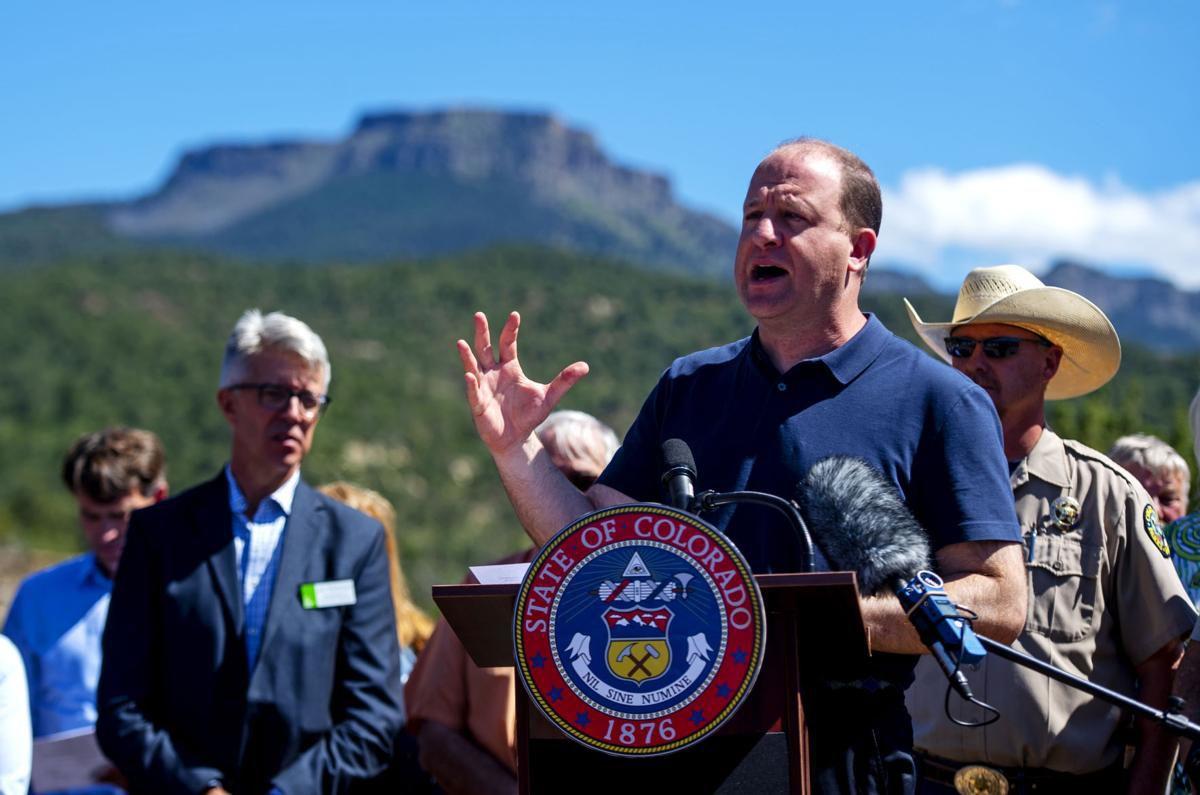 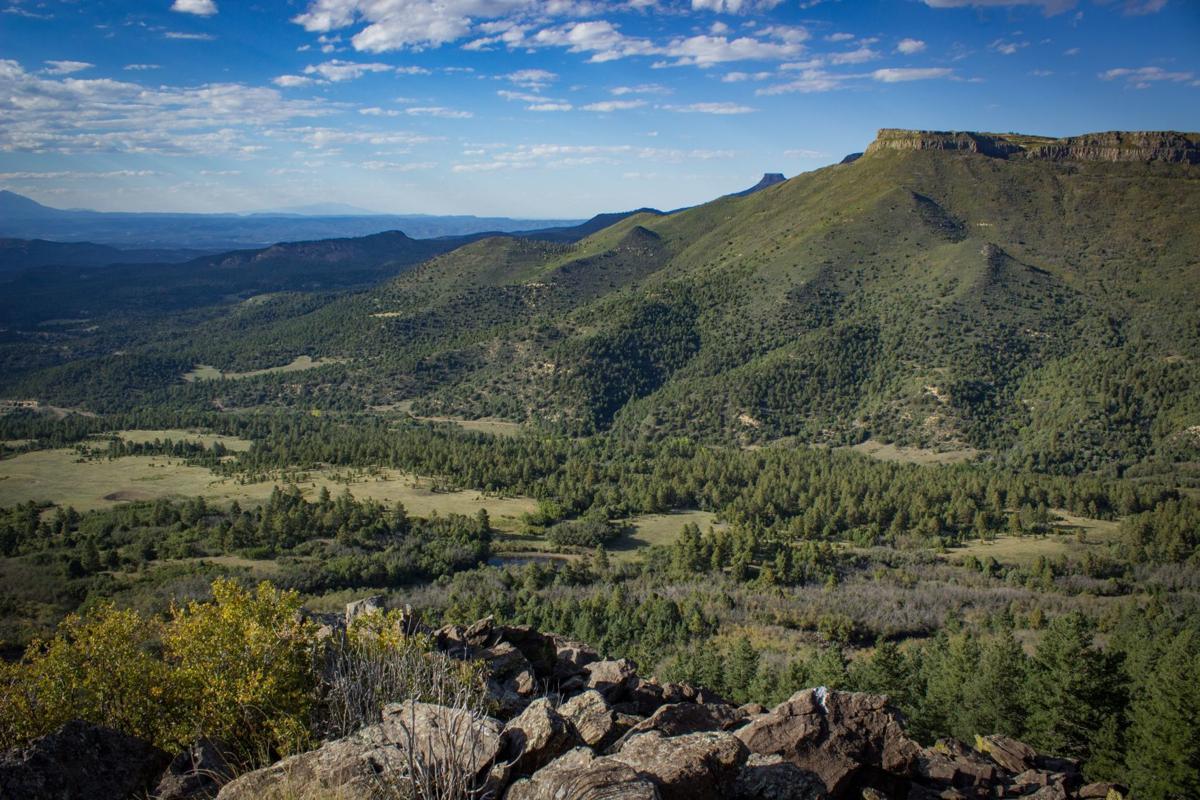 Fisher’s Peak is surrounded by the beauty of Crazy French Ranch. The land recently was acquired in a conservation mission led by The Nature Conservancy and The Trust for Public Land, with essential funding from Great Outdoors Colorado and Colorado Parks and Wildlife.

Fisher’s Peak is surrounded by the beauty of Crazy French Ranch. The land recently was acquired in a conservation mission led by The Nature Conservancy and The Trust for Public Land, with essential funding from Great Outdoors Colorado and Colorado Parks and Wildlife.

Meanwhile, the man who knew the land better than anyone stood off the side of the dirt road, cowboy hat blocking the sun, thumbs in the pockets of his blue jeans.

Troy Velarde thought of his childhood. He’d ride horseback 70-plus miles from New Mexico, driving cattle to summer on Fisher’s Peak, the flattop sentinel looming over the state line. Come fall, he’d return to retrieve the herd, back to the solitude of the mighty mesa.

He’d go on to get married at its base, on the grounds of Crazy French Ranch. He’d lend a hand for most of his adult life before taking on manager duties.

“I’ll miss it all,” Velarde said earlier Thursday, in an ATV shuttling politicians and conservationists and media to the scene of celebration.

Change was welcomed by all others who passed through a gate on a barbed-wire fence. The letters spelling Crazy French Ranch were faded on a private property post.

For as long as Trinidad has been Trinidad, its iconic backdrop has been privately held. Fisher’s Peak has been seen on the town logo and Las Animas County’s. It’s the namesake of businesses and an elementary school.

“I’ve always said Fisher’s Peak is kind of our identity,” said one native son, Mayor Phil Rico. “So this means everything to me and I believe everyone else in the community.

Access to this side of the 9,633-foot mountain will be realized in what will become Colorado’s 42nd state park.

Hopes have been high since the start of the year, soon after the massive acquisition was announced: Colorado Parks and Wildlife and Great Outdoors Colorado put down $14.5 million for the 19,200 acres, with nonprofits the Nature Conservancy and Trust for Public Land pledging the rest of the $25 million cost.

“Here at Fisher’s Peak,” the governor said before the thronelike monolith, “this is going to be one of the crown gems of our state park system.”

Only State Forest outsizes the yet-to-be-named park. And with Crazy French Ranch, stewards have achieved an even greater mosaic: Nearby is Trinidad Lake, and over Fisher’s ridge are two state wildlife areas, and beyond that is New Mexico’s Sugarite Canyon State Park. That’s 55 1/2 square miles of preservation.

A long, arduous trip through that canyon has been the only legal route to Fisher’s Peak, in hazy blue view many miles away up Interstate 25. Jim Vigil, the Colorado Parks and Wildlife commissioner based in Trinidad, once undertook the journey on horseback. Before the summit, he and his hunting buddies had to dismount.

Which is sure to add to its appeal as a destination. Land managers foresee the mountain becoming a convergence point for hikers, bikers and equestrians from two states; it’s about equidistant from Denver and Santa Fe.

“And right next to the highway,” said Brett Ackerman, southeast region manager for Parks and Wildlife. “I mean, how many state parks do we have right off the freeway that look like this?”

Trinidad is counting on people to notice. The town has a gritty heritage of railroads, mines and oil, but leaders have in mind a new economic destiny. They want a piece of Colorado’s reported $62 billion outdoor recreation industry.

But they’ll have to wait to see any noticeable impact from the peak. A lot of land means a lot of planning, with managers expecting to hire a consultant to lead a public process. Colorado last opened a state park in 2013 — 27 years after acquiring property that would become Staunton State Park in Jefferson and Park counties.

“We do not intend to do that here. We intend to get this open very quickly,” Ackerman said. “Of course, it’ll be phased to open some amenities at a time. Our aggressive timeline is to get somebody in here for at least a little bit of recreation next summer.”

The demand for state parks is rising. In 2017, 15.1 million visitors were counted across the system, up from 11.9 million four years prior.

So Velarde knew it was only a matter of time before his personal paradise became everyone else’s. He’ll miss how it was, just him and the wildlife. But he gets it.

Electric bikes soon to be humming along national park trails

The outdoor recreation industry is growing faster than the rest of the economy, according to fresh numbers from the federal government's Bureau of Economic Analysis.

Fishers Peak is a signature away from becoming Colorado's 42nd state park after the legislature passed Senate Bill 3 on Friday.

Great addition for Colorado, truly! Fisher Peak will be an outstanding opportunity for Coloradans.