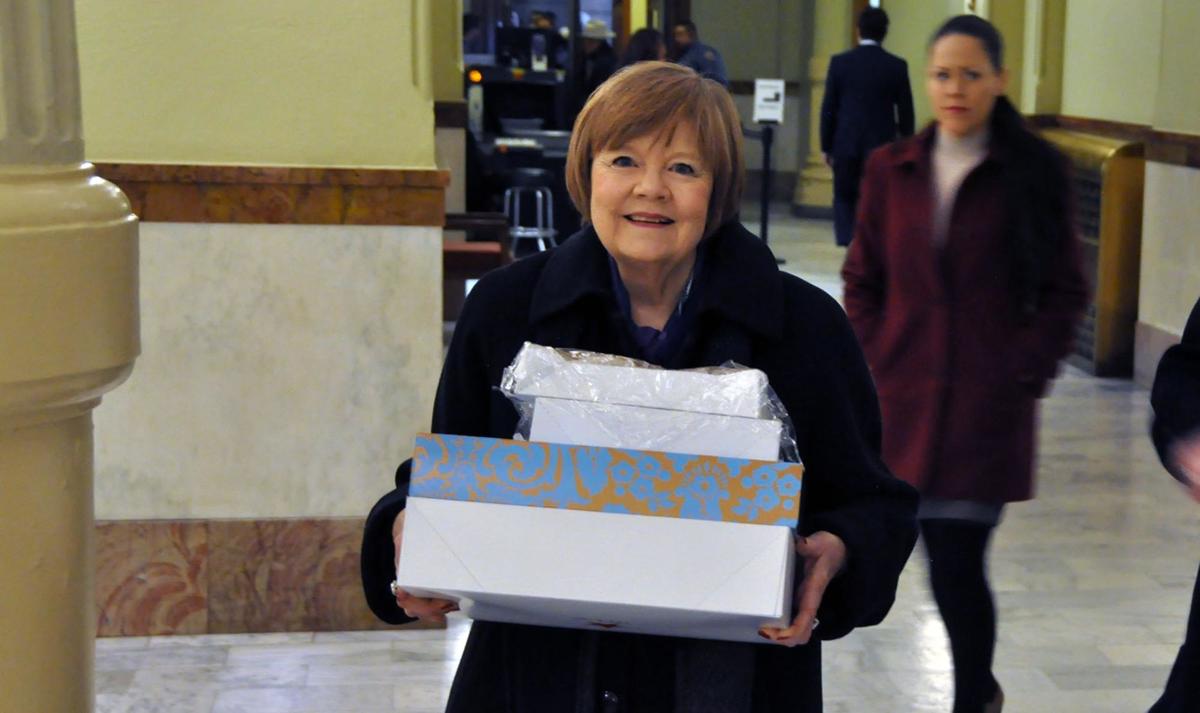 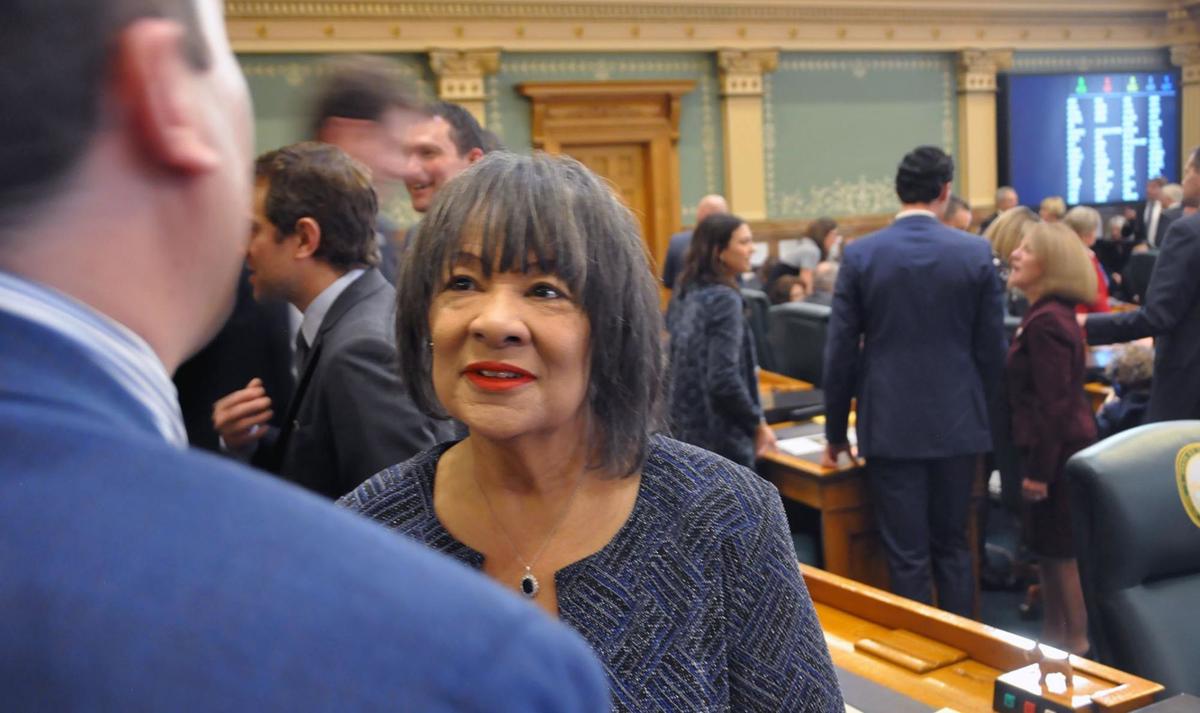 Former state Rep. Wilma Webb, D-Denver, visits in House chambers during a brief recess on Opening Day of the 2019 Colorado General Assembly at the State Capitol in Denver on Friday, Feb. 4, 2019. Webb served in the Colorado House of Representatives from 1980 to 1993. 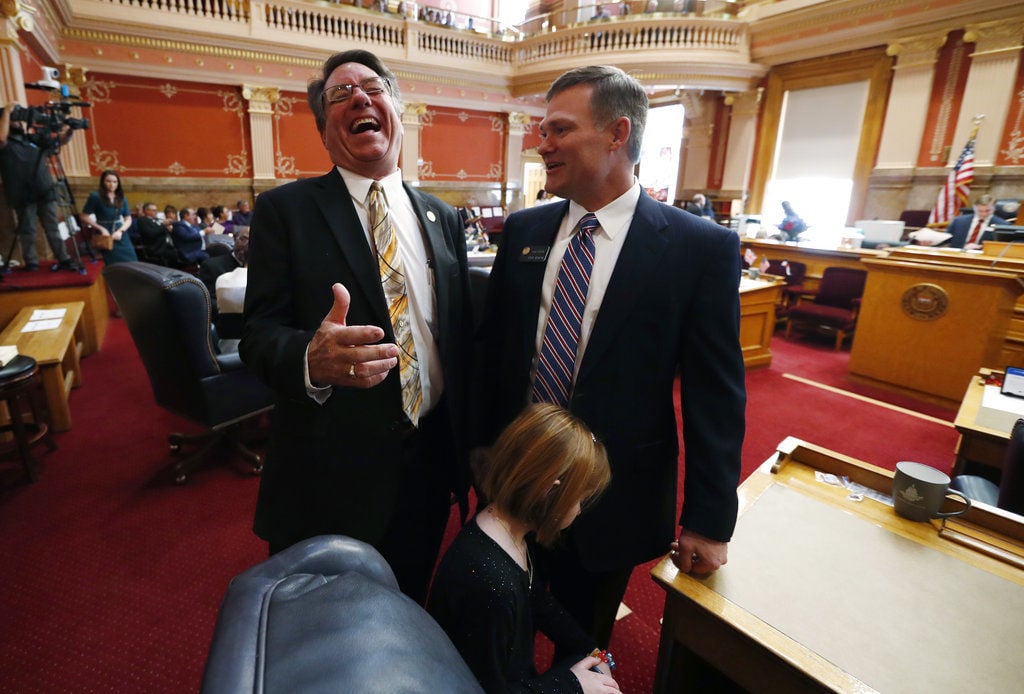 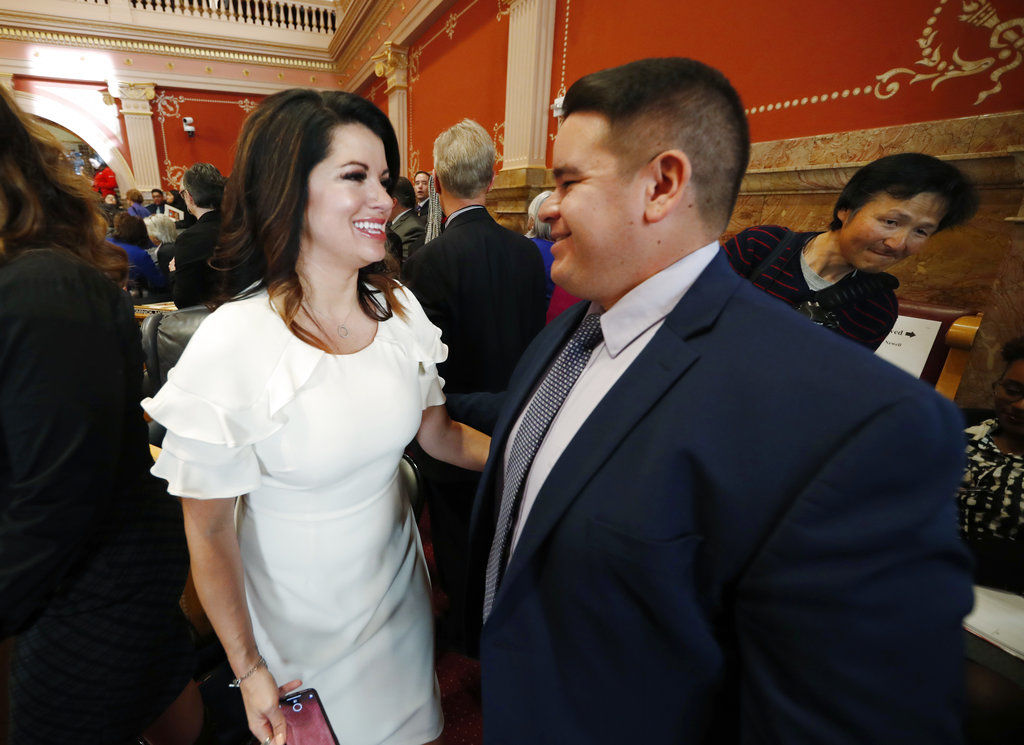 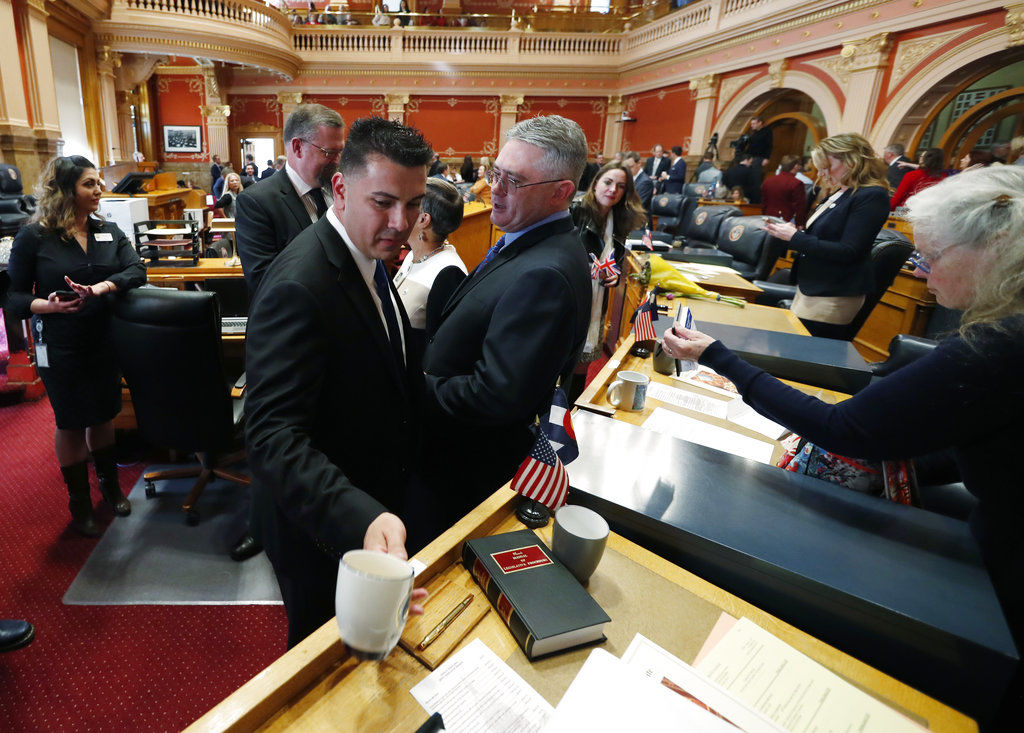 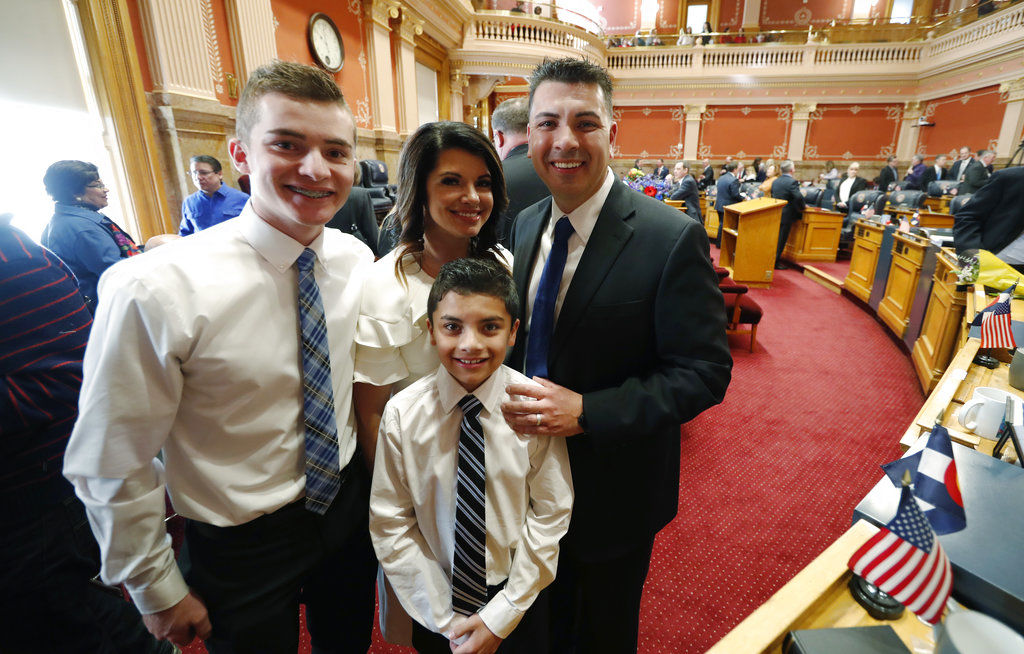 State Sen. Leroy Garcia, D-Pueblo, right, joins his wife, Michelle, back center, and their sons Xan, 11, front center, and Jeremiah, 17, for a photograph as lawmakers convene for the new session in the Senate House chamber in the State Capitol Friday, Jan. 4, 2019, in Denver. Garcia will serve as president of the state senate.

The 2019 legislative session is just minutes away from convening, and Colorado Politics has you covered.

Our reporters — Marianne Goodland, Ernest Luning and Conrad Swanson, as well as photojournalist Dougal Brownlie — are at the Capitol and will bring you the latest from opening day.

Stay with Colorado Politics for live video of proceedings, original reporting and a compilation of tweets from movers and shakers under that famous golden dome.

I am officially done. It has been an honor to serve as Senator of District 2 and as President of the Senate. Senator Dennis Hisey will do a great job representing his district! #coleg #copolitics pic.twitter.com/glIioWGX9H

That's a wrap for our live blog, dear readers. Thanks for following along. We'll update shortly when additional coverage posts.

Speaker KC Becker is calling the House back to order. There's a little more business, she says. Bills will be introduced this afternoon, she announced, and then the House will be adjourned until 10 a.m. Monday. The House now stands in recess.

The joint session has been dissolved, to copious applause.

The joint session is underway.

Pictures from opening day are hitting the Associated Press wire. Here are the first.

If you're looking for more concise coverage than this live blog, our Conrad Swanson has posted his House coverage story. Read it here.

The Senate is now adjourned until 10 a.m. Monday. A joint session is ahead.

This tweet just in from outgoing House Speaker Crisanta Duran.

It was an honor 2 serve as the 1st Latina Speaker in the US. For gens, a cowboy statute has been passed onto members of leadership. Today, I left a gift 4 Speaker @kcbecker & future members of the #coleg leadership. #copolitics #InclusiveColorado pic.twitter.com/4p6GdIp5nV

Here's a fresh shot of House Speaker KC Becker from our Dougal Brownlie.

A reflective tweet from Sen. Kerry Donovan about Sen. Chris Holbert's speech, which is currently underway.

Sen. Holbert’s speech is a great skip through CO history and our constitution. My copy of our constitution has perhaps seen better days but it is well traveled. Passed down to me, w/ helpful direction, from @PatSteadman. #Coleg pic.twitter.com/0C36Rxr1jo

Speaker KC Becker has ended her address in the House, our Conrad Swanson reports.

Former state Rep. Wilma Webb, D-Denver, attended opening day as a guest of Democratic state Rep. Leslie Herod, who represents the same House District 8 in East Denver that Webb represented from 1980 to 1993. She stepped down after her husband, Wellington Webb, was elected mayor of Denver.

House Speaker KC Becker is giving her first address, our Conrad Swanson reports. A bit of what she has to say this morning:

Becker giving thanks during her first address as speaker and recalling her childhood. #copolitics pic.twitter.com/4K4Tfc1v9N

You can read the full text of Becker's speech here.

It's on to speeches in the Senate. First up: President Leroy Garcia. He started with a shout-out to his folks back home in Pueblo. Now speaking about his military service and asking anyone who has served in the military or law enforcement to stand and be recognized. One of his sons just received a nomination to West Point and the Merchant Marines, he announced.

"Colorado and Coloradans never gave up in the face of challenges ... and neither can we. Colorado is a special place. It is a state filled with people who are innovative and find solutions. And I'm absolutely confident that this body will be able to find many solutions to the problems we face," Garcia tells the Senate.

Here's a fun shot from Conrad Swanson, who's spending the morning in the House.

This little dude’s having a pretty good day at the head of the House. #copolitics pic.twitter.com/HX49vTe4OX

It's on to HJR 10-01, the certification of votes for statewide offices, in the Senate. Important detail: This is what let's Gov.-elect Jared Polis become inaugurated next week, our Marianne Goodland reports.

Another snapshot from the Senate this morning, courtesy of our Marianne Goodland.

Sen. ⁦@pettersen4co⁩ with her mom, the inspiration for much of her agenda over the years. #coleg ⁦@colo_politics⁩ pic.twitter.com/pOXKu9TSwD

The Senate is back in order, and the House is organized and ready for business (as is the Senate).

The Senate is in recess. If you're killing time, here's a short video tour of opening day from Rep. Leslie Herod.

It’s Opening Day of Session! We have a lot of work to do for the people of Colorado in 2019.

Final words from outgoing House Speaker Crisanta Duran to incoming Speaker KC Becker: “I want to leave with the words of the Talmud: 'Do not be daunted by the enormity of the world’s grief. Do justly now. Love mercy now. And walk humbly now,'" our Conrad Swanson reports.

The last of the controversy over former Senate secretary Effie Ameen is now over, our Marianne Goodland reports. Cindi Markwell has been sworn in as her replacement. The lone "no" vote on Markwell's appointment came from Sen. Owen Hill, who spoke to the Senate about his concerns regarding the situation surrounding Ameen's departure.

In other news, KC Becker was just unanimously elected as speaker of the House, our Conrad Swanson reports.

If you're watching live, the "one absent" you keep hearing about in the Senate: Randy Baumgardner, who is set to resign on Jan. 21.

"Time to get a Twitter handle," our Marianne Goodland tweeted, jokingly calling out Sen. Lois Court of Denver, who was just elected president pro tem.

Another snapshot from the House, courtesy of Conrad Swanson: this one of Rep Tony Exum of Colorado Springs.

And here’s Rep. Tony Exum, who represents the southeast side of Colorado Springs. He said one of his priorities this year is to shore up the state’s education funding. #copolitics pic.twitter.com/CfOYZdXxN2

The first roll call of the Senate occurred with one notable absence: Sen. Jerry Sonnenberg, "who dashed out for a second to the merriment of all," our Marianne Goodland reports.

In other news, Sen. Leroy Garcia was voted Senate president by acclamation. There were no "no" votes.

Here's a nice shot of the earlier swearing-in in the Senate, courtesy of Sen. Steve Fenberg.

Official swearing in of my Senate colleagues. Excited to get to work! #coleg #copolitics pic.twitter.com/hRbojlsqLY

"If smiles can light up a room, those 17 senators sworn in today are mega-watt!" Goodland added.

Swearing in is about to begin in the House, our Conrad Swanson reports.

More sights and sound bites from the House, courtesy of Conrad Swanson.

Here’s Rep. Marc Snyder, former mayor of Manitou Springs, who is waiting his turn to be sworn in. Other than that he said he’s happy to be here. Asked him what he’s expecting today. He shrugged, smiled and said “A lot of pomp and ceremony.” #copolitics pic.twitter.com/LSsS30Onzd

Some good background from our Marianne Goodland: "On to reading of abstract of votes in the #coleg Senate," she tweeted. "Same will happen in the House, to include all statewide elected offices, not just House. This has to be done before @PolisForCO can be sworn in, per constitution and that's why we're here today instead of next Wednesday."

Something went awry with the video feed of the Senate proceedings shortly after 10 a.m. Secretary of State Wayne Williams (in one of his final duties before leaving office) was reading the official results of November's election on screen with what sounded like a western movie theme playing in the background. Fitting: Cowboy music before he rides off into the sunset ....

It's Pueblo Day in the state Senate, our Marianne Goodland is reporting. The priest who gave the prayer this morning is from Saint Joseph's in Pueblo, and incoming Senate President Leroy Garcia plays the piano there.

Former House Speaker Dickey Lee Hullinghorst, D-Gunbarrel, who led the House during a period when Republicans controlled the Senate, told Colorado Politics she's anxious to see what the Democratic majorities can accomplish this session.

"I’m really happy that we’re moving forward in Colorado with a good majority," Hullinghorst said as she entered the Capitol basement through the public entrance. "I think we’re going to get a lot of good things done, and I’m really proud of all the people that got elected. They’re highly qualified, and it’s going to be a good session."

She said Democrats might have been able to get a few things done with the budget and health care if she'd had a Democratic Senate but felt lawmakers managed to work together and solve problems even with the divided Legislature.

"I think it worked pretty well, even with a Republican Senate," she said. "We got some good things done and had some good cooperation. It's a little bit different than the national scene — always, which I think is great about Colorado.

As for Gov.-elect Jared Polis, a longtime friend and fellow Boulder Democrat, Hullinghorst said Coloradans shouldn't be surprised at his ambitious agenda.

"He’s a man of action. I think you’re going to see a lot of things happening. He’s rarin’ to go, and he has a really good understanding of policy and issues and the State Legislature. I think he’ll be a great governor."

And they're off! It's a packed House (literally), reports our Conrad Swanson.

No surprise here — more family members at the Capitol for opening day, as is custom. Sen.-elect Mike Foote, of Boulder County, is among those with a spouse and children present.

I’m honored to be here and ready to work. #coleg pic.twitter.com/wKdjTZIJsP

House District 11 Rep. Jonathan Singer isn't the only one ready for opening day. Apparently his child is too ....

You guys ready for this? #1stDay pic.twitter.com/DSnkucOPfW

Our photojournalist Dougal Brownlie has been at the Capitol for about an hour. "Already a gathering to raise awareness for a healthy climate and no fracking," he reports.

Already a gathering to raise awareness for a healthy climate and no fracking @csgazette @colopolitics pic.twitter.com/QoNxCIUFN5

Our Conrad Swanson is at the Capitol already and tweeted this picture. "Stay tuned for more #copolitics," he tweeted.

Okay amigos, I’m up in Denver today to cover opening day of the General Assembly. Looks like I’ll be up here a bit more often for the next little bit. Stay tuned for more #copolitics pic.twitter.com/yo7mIr79IX

Later, he tweeted this.

The calm before the storm on Colorado’s House floor. pic.twitter.com/rhBS7pXF6K

The new legislative session at the Colorado capitol started Friday.

You guys ready for this? #1stDay pic.twitter.com/DSnkucOPfW