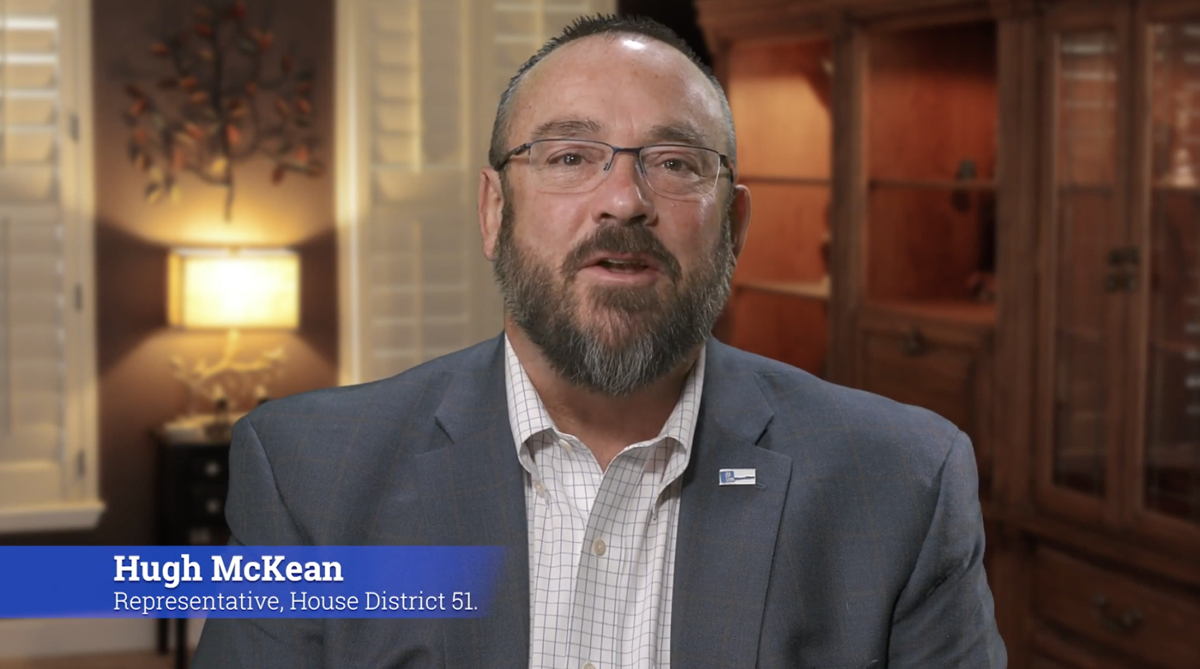 Rep. Hugh McKean of Loveland speaks to his constituents on his YouTube channel on Feb. 28, 2020. 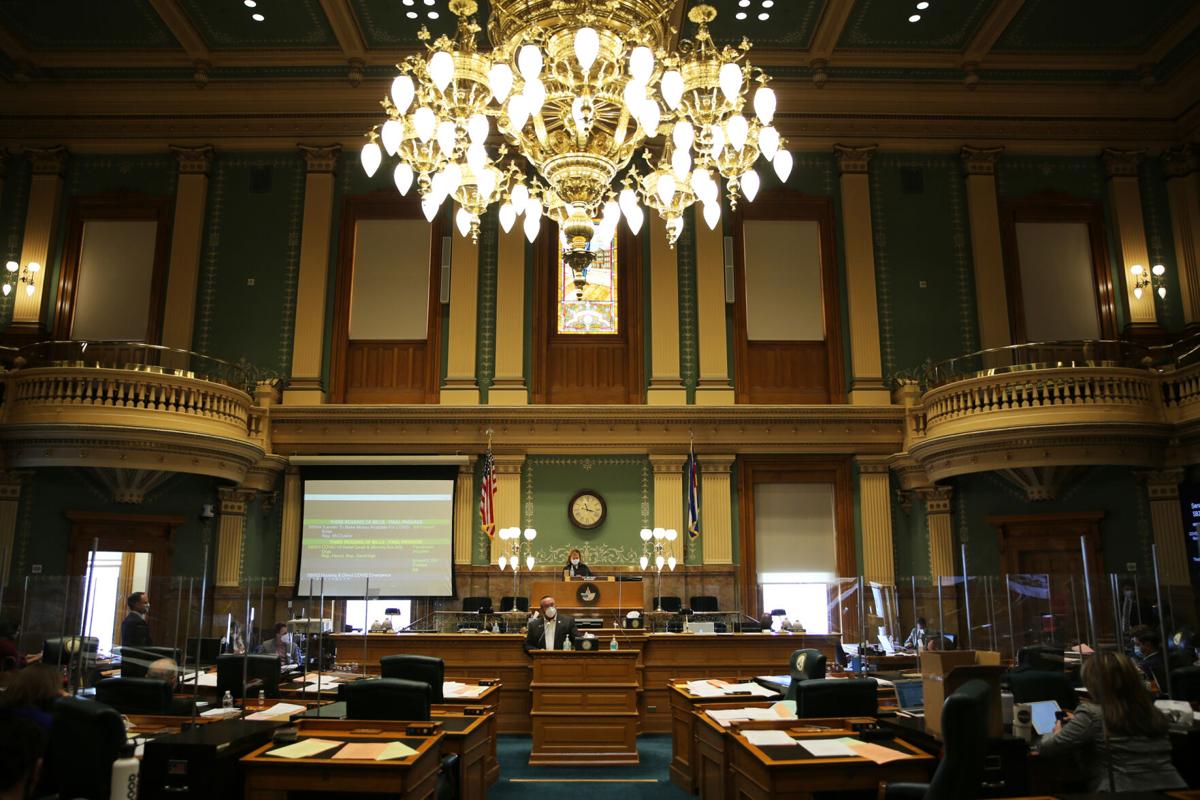 State Rep. Hugh McKean, R-Loveland, speaks on the floor during a Colorado House session during a special session on Dec. 2, 2020. McKean will be the new GOP caucus leader when lawmakers return to the Capitol in Denver on Jan. 13.

Rep. Hugh McKean of Loveland speaks to his constituents on his YouTube channel on Feb. 28, 2020.

State Rep. Hugh McKean, R-Loveland, speaks on the floor during a Colorado House session during a special session on Dec. 2, 2020. McKean will be the new GOP caucus leader when lawmakers return to the Capitol in Denver on Jan. 13.

Colorado Republican House leader Hugh McKean said a legislator is a lot of things: a professional student, a bean counter, a time manager and a judge of community standards, not just a passer of laws and an agent of change.

That's how he answers the question of why he wanted such a job when he ran for the seat in 2016.

He describes his new job managing the minority caucus, with tense rivalries and disparate interests, as sometimes like calming down a bag of cats.

McKean inherits a caucus divided between its hard-right base and suburban moderates who recognize the minority's losing numbers and seek a compromise.

"The work side of this job, I love," he demurred.

In what was forecast as a blue wave last November, House Republicans broke even, maintaining a 41-24 margin against the chamber's Democratic majority.

Republicans are bracing for what the Democratic-led legislature will do in the name of pandemic relief and the state's clear lean to the political left.

"I'll be altruistic about this," he said in a conversation about potentially more environmental regulation bills. "I wouldn't say it's just about winning political points. I think it's about winning battles when they think they have the best ability."

Controlling the state House, Senate and governor's office counts as a lot of ability.

McKean said managing the state budget is atop his priority list.

"My concern is that we won't do the smart things," he said. "We'll just keep spending. We won't refill our reserves back to the amount we should. On the heels of the good revenue forecast, I'm concerned we're going to see some bad ones."

His caucus also plans to defend against Front Range-focused policies and programs that leave rural Colorado behind.

Democratic legislators tend to hail from concentrated urban areas, mostly across Denver, Adams and Boulder counties. Rural districts are typically Republican, plus they're few and far between.

McKean cited criminal justice reform's potential to inadvertently crush rural economies by closing private prisons there, then overcrowding state prison and halfway houses, or freeing prisoners who wouldn't otherwise be on the street.

He's hopeful the Democratic-led General Assembly will lay off oil and natural gas, an industry that took broadsides in 2019. Senate Bill 181 created a professional regulatory board that ended up creating setbacks voters had rejected in the form of Proposition 112 the previous November.

"We knew as soon as they could adopt regulations the voters wouldn't buy, they would," McKean said.

With the precedent of mission creep established, he's concerned about where it creeps next.

"I think once a bureaucracy establishes a beachhead, there's a high likelihood they go beyond that," he said of crisis spending.

In 2016, McKean was elected to the District 51 seat held by then-House Republican leader Brian DelGrosso, who ran up against term limits.

McKean has been general contractor in Loveland since 1994. A graduate of nearby Colorado State, he has two grown children, educated in local schools. He was reelected with 94% support in November.

When he got in the race for the statehouse, McKean put water atop his priority list. He has supported the Northern Integrated Supply Project that includes two regional reservoirs filled by the Poudre River, which environmentalists aren't taking lightly.

He also co-sponsored House Bill 1248 in 2017, which made $90 million in loans available for the Chimney Hollow Reservoir, part of the Windy Gap Firming Project, a diversion off the Colorado River near Granby, to help supply Boulder, Estes Park, Fort Collins, Greeley, Longmont and Loveland.

The bill's primary sponsor was a Democrat from neighboring Fort Collins, Rep. Jeni Arndt, while Greeley Sen. John Cooke, a Republican, carried the bill through the upper chamber to the governor's desk.

McKean's mission is creeping toward identifying and maximizing hydroelectricity generation from reservoirs as a renewable resources. That would help generate income to pay for the new reservoirs, which also provide buffers for growth, drought, wildlife and recreation.

Without systemic bureaucratic change in Washington, the issue of water will stall without a shove from the state, McKean said.

"What I think we need to do is start looking through a broader lens, where we're not just talking about reservoirs for the storage of water, but whole host of uses."

LEGISLATIVE PREVIEW 2021 | Who's hot, who's not among lawmakers going into the session

Whose star is on the rise, and whose best has passed them by — sometimes through no fault of theirs? As the Colorado Politics team looked to what's likely to come in the 2021 session, we ranked the state officials.

Rep. Patrick Neville, R-Castle Rock, posted the voter registration information of Conrad Swanson, one of the authors of an article exploring the shift in Colorado away from the Republican Party. The story also highlighted the role of the GOP caucus’ campaign bank account in supporting allies of Neville.

INSIGHTS | A spirited fight when everyone agrees at the Colorado Capitol

Imagine, if you will, a place where everyone has the same goal and fundamentally agrees on the solution, yet they can't stop bickering long enough to hear one another.

“It’s important for everyone to remember where we were last year. We were facing one of the starkest, most devastating economic forecasts that the Joint Budget Committee has ever seen,” incoming Speaker of the House Alec Garnett, D-Denver, told the region’s business community during a virtual legislative preview event. “I just wanted to paint a picture of the amount of revenue pressure, revenue crisis, that Coloradans face.”