In a stunning move that has the potential to scramble the Democratic primary in one of this year's most competitive U.S. Senate races, a judge on Tuesday ordered Colorado's top election official to include first-time candidate Michelle Ferrigno Warren on the ballot, ruling that the novel coronavirus pandemic prevented her from collecting enough signatures on nominating petitions.

The nonprofit leader and immigrant rights-activist joins former Gov. John Hickenlooper, who qualified by petition a month ago, and former state House Speaker Andrew Romanoff, the only candidate to emerge from Saturday's state Democratic Party assembly, which was held online because of restrictions on public gatherings.

Denver District Court Judge Christopher J. Baumann ruled that Warren "substantially complied" with state petition requirements, even though she only collected 5,383 valid signatures out of the 10,500 specified by statute.

"Preserving fair and free elections is the bedrock to our democracy, which includes under-represented candidates having access to the ballot," Warren said in a statement. "Today’s ruling ensured that we are one step closer to giving Coloradans voting choices that are not just between the establishment and a career politician.” 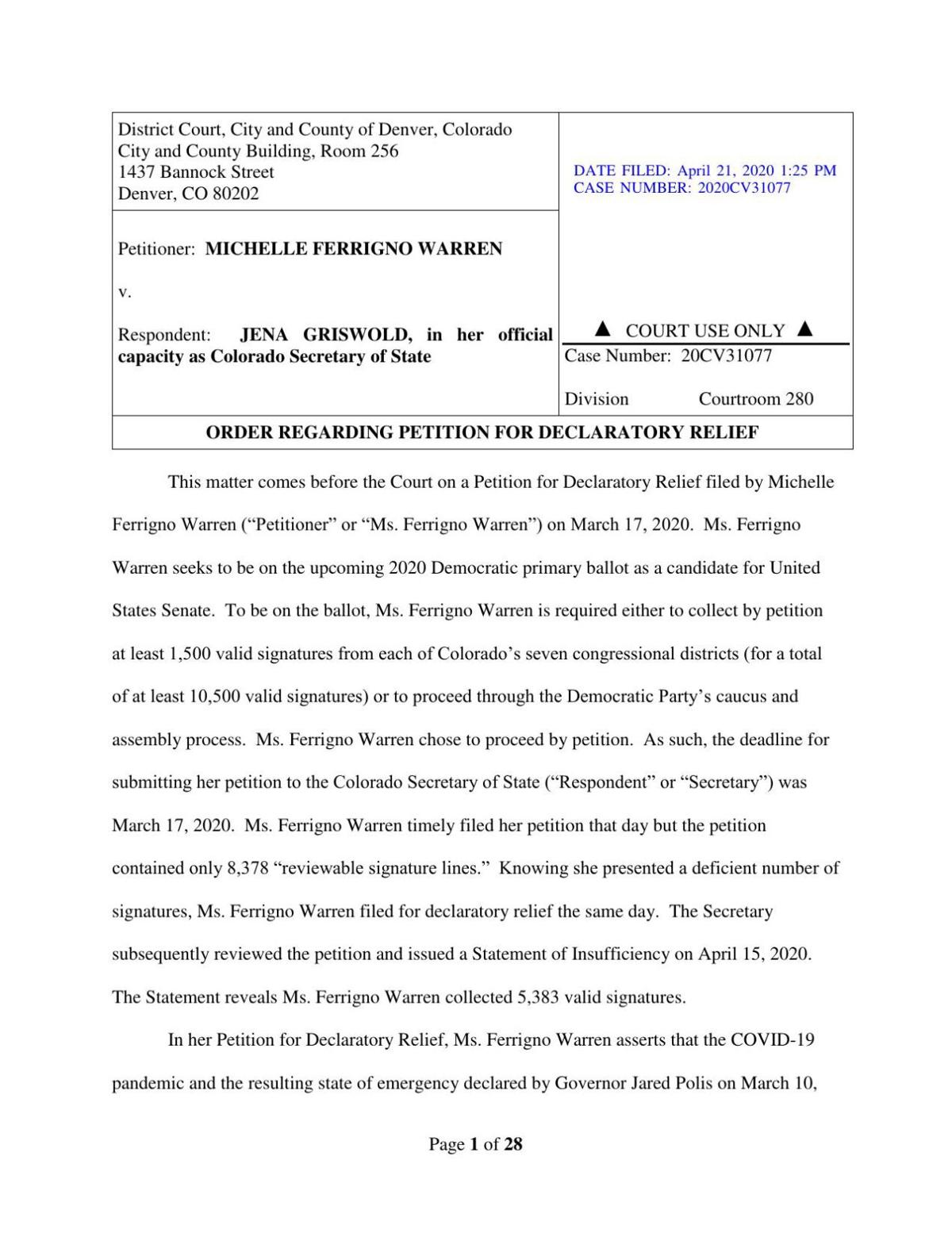 In his 28-page ruling, Baumann concluded that Warren satisfied the necessary legal factors, including not falling too far short of the requirement and making a good-faith effort to meet the threshold.

While acknowledging when she turned her petitions in on March 17 that she didn't submit enough signatures, Warren on the same day sued for a spot on the June 30 primary ballot, arguing that the COVID-19 epidemic "created unprecedented barriers" to signature collection.

The judge agreed, noting that Warren's circulators "had to collect petition signatures in the shadow of a global pandemic and looming public health emergency."

Citing Warren's testimony, Baumann wrote: "[S]ignature collection is a 'very personal activity' and potential electors were 'more cautious' about interacting with circulators beginning about one week before Governor Polis declared a state of emergency. In the best of times, engaging strangers in public, holding their attention, and acquiring their signatures on a petition is challenging. In a climate of social distancing to mitigate the spread of a communicable disease, it is even more so. During a declared state of emergency, it becomes almost futile."

A spokesman for Secretary of State Jena Griswold wouldn't say whether Griswold, a Democrat, intends to appeal the decision but noted that she has three days to decide.

Baumann's ruling could have wider implications, potentially influencing the fate of two other Democratic U.S. Senate candidates who are asking the same court to put them on the ballot despite turning in fewer than the required number of valid signatures.

Psychologist and climate activist Diana Bray and nonprofit executive Lorena Garcia have both been informed by the Secretary of State's Office that their petition submissions came up short. Bray filed a motion in Denver District Court on April 13 seeking a spot in the primary, and Garcia has until April 27 to file.

Romanoff told Colorado Politics that he congratulated Warren when he heard she had made the ballot, adding that he "look[s] forward to rejoining her on the virtual campaign trail. Let’s debate!"

“I am excited and ready to be the voice of everyday Coloradans on the primary ballot in June," Warren said.

"COVID-19 has further shown us the partisanship of our politics and the harm it is doing to our citizens. It's time that we make D.C. work for us and not those who pay their dues to lobbyists and this corrupt president. Career politicians like Cory Gardner who work to hold power for themselves and not for the good of people need to be replaced."

Pointing out that, if elected, she would be Colorado's first woman senator, Warren added that she has "demonstrated that she cares more about the welfare of people instead of playing politics with their health, welfare and safety."

Pollster Ciruli asks if the Democratic primary is a done deal

Under emergency legislation approved last month and an executive order issued by the governor, Griswold has until May 7 to certify the primary ballot. County clerks start sending mail to most Colorado voters on June 9.

"I will strongly support the Democratic nominee in this race. But that doesn’t mean we duck and cover in the meantime," said former state House speaker Andrew Romanoff.