The state GOP, however, plans to file an immediate appeal to the Colorado Supreme Court, arguing that the judge's decision will flood the court with "purely political fights," U.S. Rep. Ken Buck, who doubles as the party's state chairman, told Colorado Politics.

The dispute revolves around whether the state Republicans can force a local party officer to file a document designating David Stiver, a veteran party activist, as a candidate in the Senate District 10 Republican primary after a district assembly sent state Rep. Larry Liston, R-Colorado Springs, to the ballot unopposed.

The district's March 22 assembly was held online to comply with restrictions on public gatherings meant to slow the spread of the coronavirus. The heavily Republican legislative district covers north-central Colorado Springs and is represented by term-limited state Sen. Owen Hill, a Republican.

Following the assembly, Stivers and his allies lodged a complaint with the state GOP claiming they'd been treated unfairly. Last month, the party's top governing bodies voted to require the district's chairman, Eli Bremer, to submit official paperwork to the Secretary of State's Office listing both Liston and Stiver as candidates in the June 30 primary.

But Bremer refused, insisting the party can't require him to file a document saying that Stiver met the legal requirement by receiving at least 30% of assembly delegates, even though the candidate fell short. He maintained it would be a false document.

According to court documents, Liston received 75% of the vote, Stiver got 24%, and 1% abstained.

One of Bremer's fellow district officers, Karl Schneider, asked the court for an injunction to prevent Bremer from putting Stiver on the ballot and to block Secretary of State Jena Griswold, a Democrat, from certifying a ballot with Stiver's name on it. 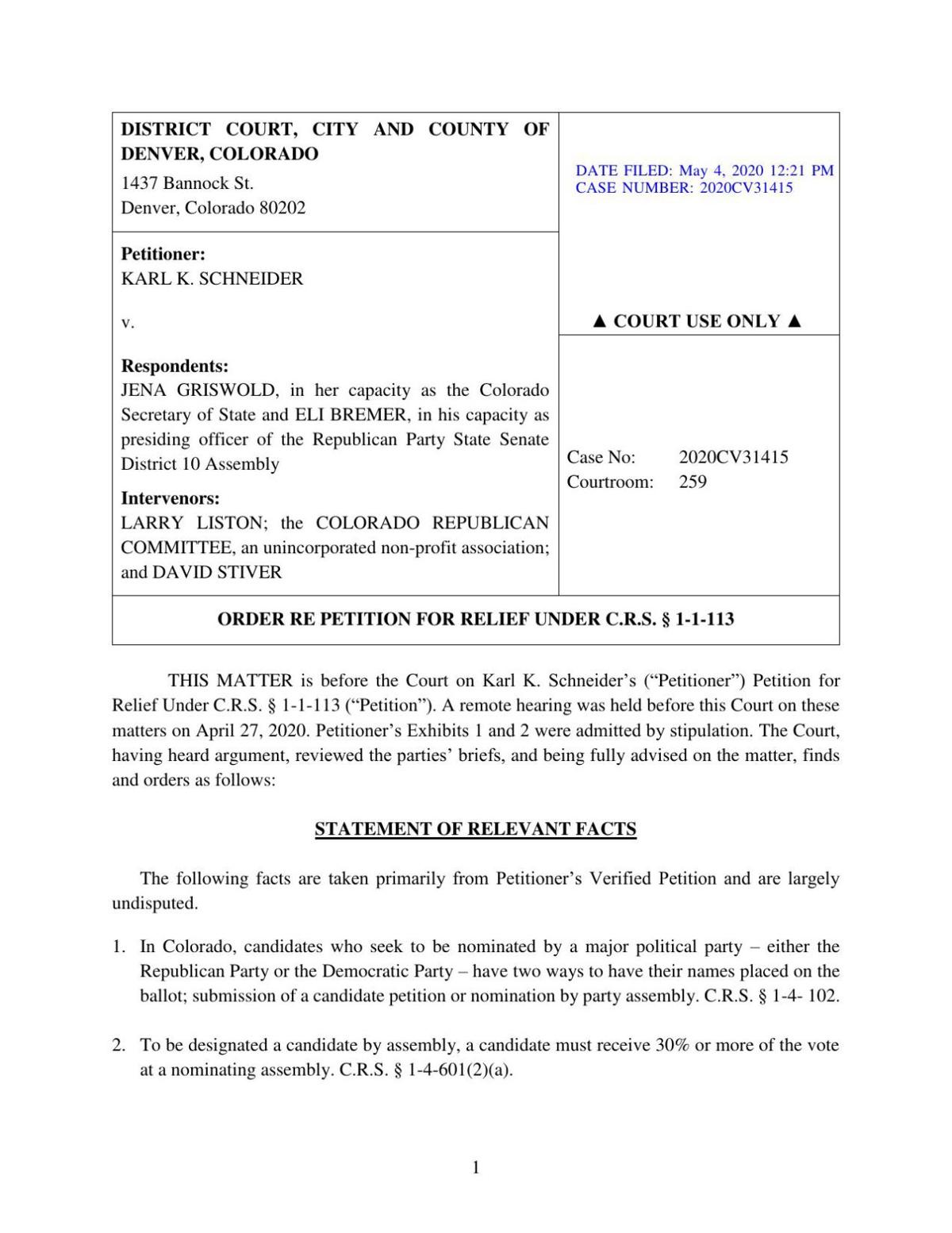 In an 11-page decision, Denver District Court Chief Judge Michael A. Martinez agreed with Schneider, ruling that the statutory requirement that a candidate achieve 30% support can't be set aside to satisfy the state GOP's attempt to provide an "equitable remedy" for Stiver.

"While the Court is cognizant of the alleged irregularities that occurred during the nominating assembly, the occurrence of those events, if any, do not take precedence over or preclude application" of the statute, Martinez wrote.

"In March, the assembly delegates voted on candidates, and the court properly found that local Republican Party voters — not the state party central committee — get to vote for their state Senate candidate," Gessler said in an email.

Announcing his intention to appeal the ruling, Buck, a former district attorney, framed the decision differently in a statement sent by a spokesman in a text message.

"We disagree with the district court's analysis and decision in this case. For almost 120 years, Colorado law has wisely provided that disgruntled candidates in political party assemblies cannot bog down the state's courts. Today’s ruling will, if upheld, mean our courts will be inundated with purely political fights every two years. For this reason we will appeal his decision to the Supreme Court."

A party spokesman said he expected the appeal would be filed sometime Monday night.

Bremer, a former chairman of the El Paso County GOP, said he plans to "wait and see" what the Supreme Court has to say but expressed skepticism that Buck's position would prevail.

"I would be very surprised if the supreme court overturned this, because that would give the state party complete power to effectively undo a party election," he said. "With no constraint in the law, the party could literally replace candidates at their will — they could do anything. There would be no legal way for them to be prevented from doing anything they wanted. That’s a lot of power in the hands of an organization that would then have no constraint over it."

Griswold faces a Thursday deadline to certify the primary ballot to county clerks. Mail ballots start going out to most state voters on June 9.