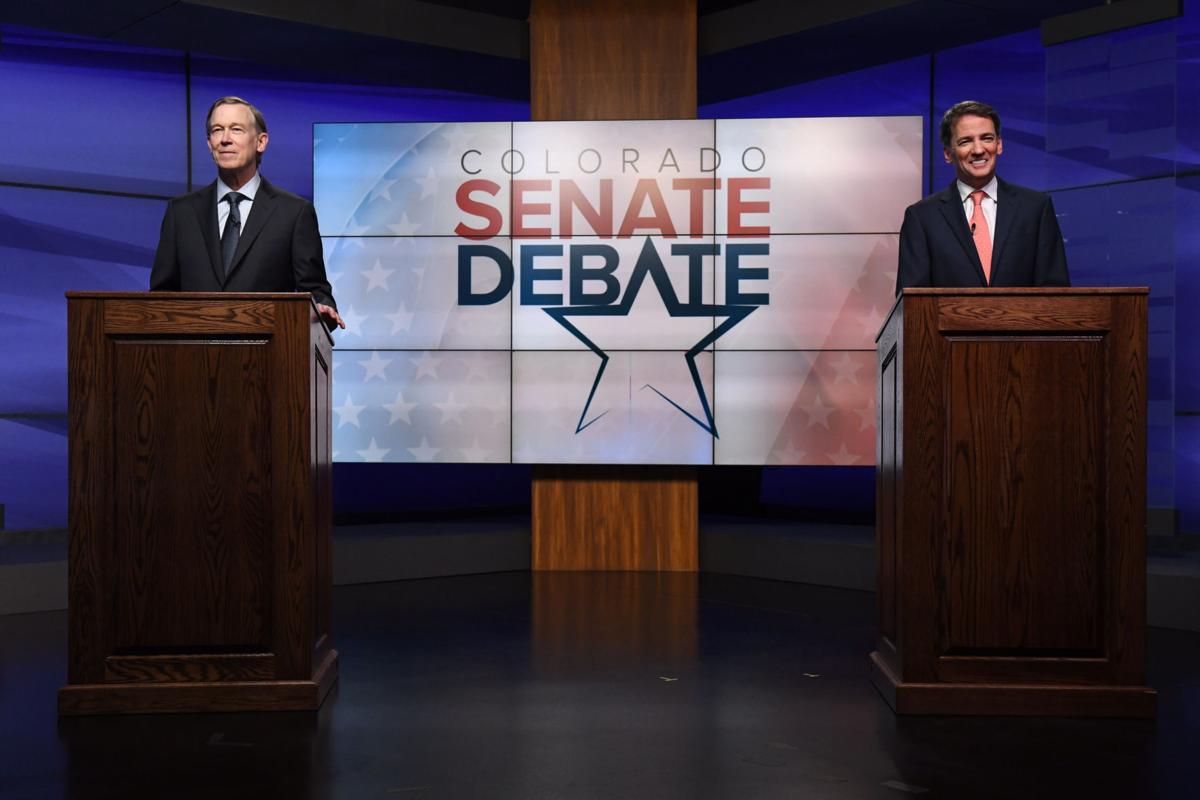 Former Colorado Gov. John Hickenlooper, left, and former state House speaker Andrew Romanoff get set for a debate in the studio of Denver7 in Denver on Tuesday, June 16, 2020. The debate, held ahead of the Democratic primary, was sponsored by The Denver Post, Colorado Public Radio News, Denver7 and the University of Denver’s Center on American Politics. The winner of the June 30 primary will go on to face incumbent Republican Colorado Sen. Cory Gardner in November's general election. 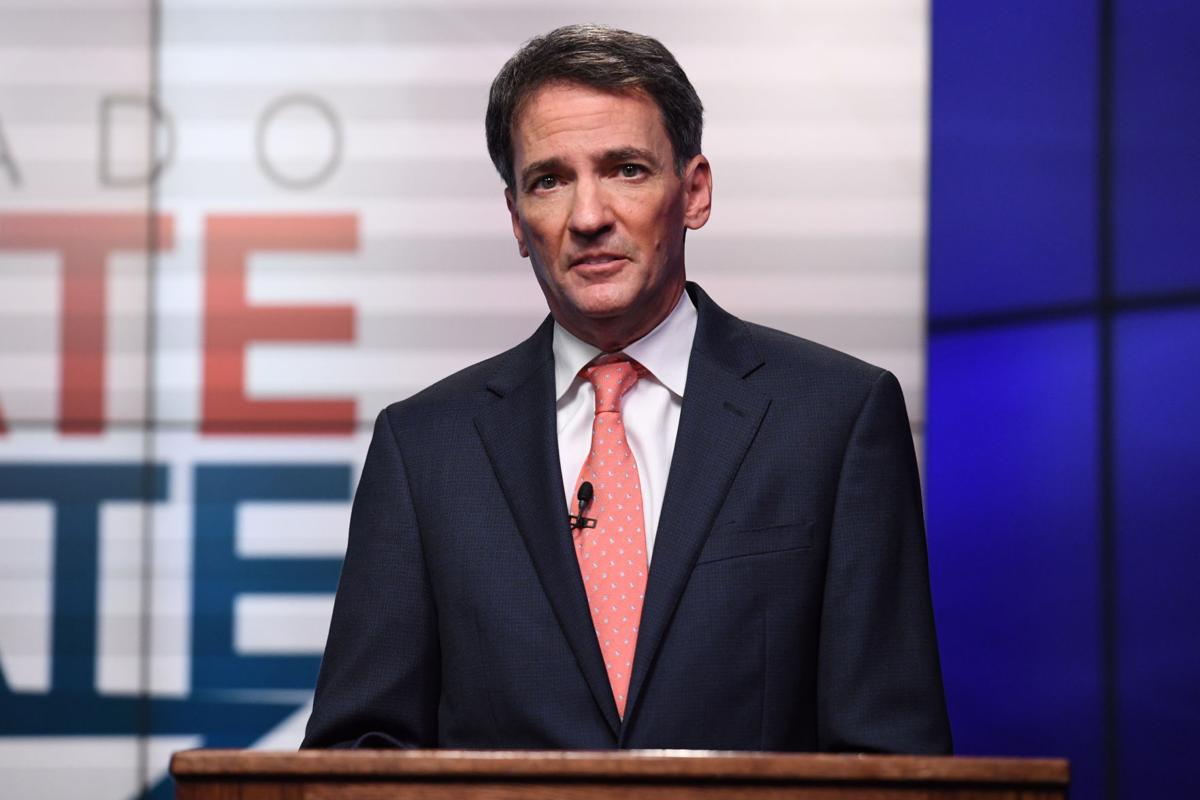 Former state House speaker Andrew Romanoff debates Colorado Gov. John Hickenlooper in the studio of Denver7 in Denver on Tuesday, June 16, 2020. The debate, held ahead of the Democratic primary, was sponsored by The Denver Post, Colorado Public Radio News, Denver7 and the University of Denver’s Center on American Politics. The winner of the June 30 primary will go on to face incumbent Republican Colorado Sen. Cory Gardner in November's general election. (Photo by Hyoung Chang/The Denver Post) 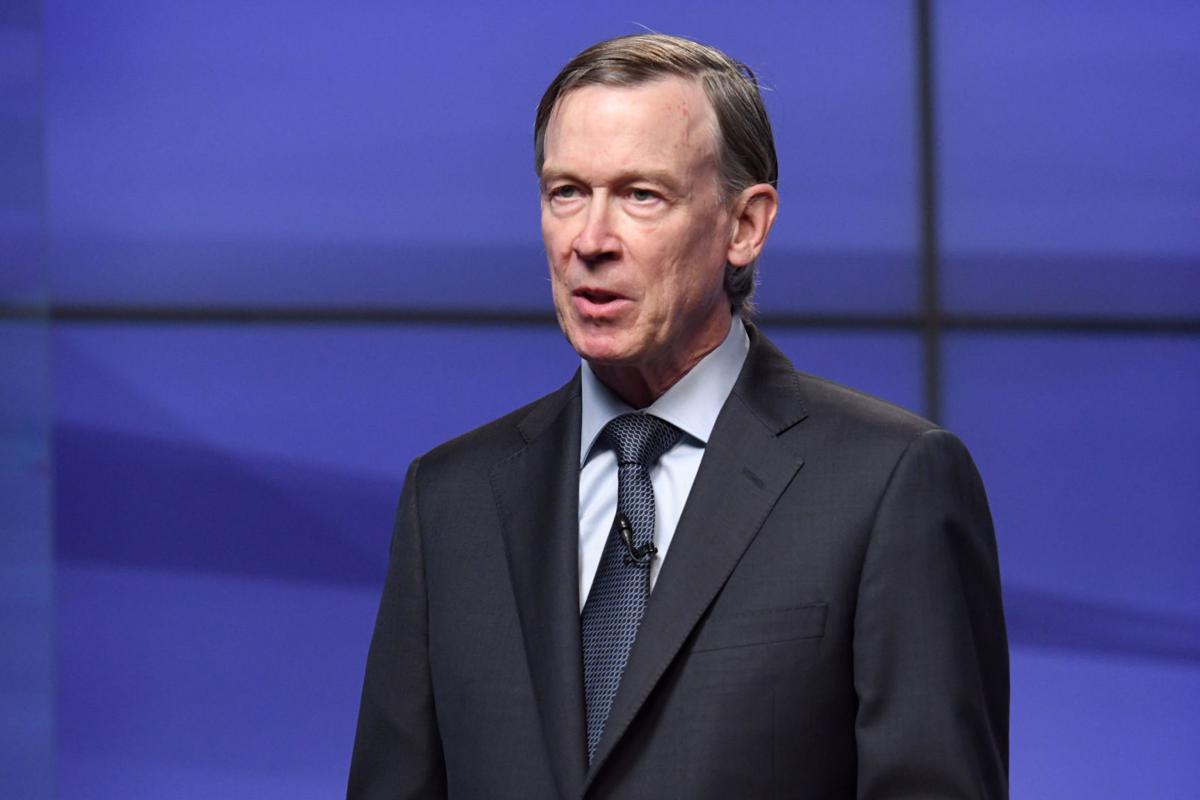 Former Colorado Gov. John Hickenlooper, left, and former state House speaker Andrew Romanoff get set for a debate in the studio of Denver7 in Denver on Tuesday, June 16, 2020. The debate, held ahead of the Democratic primary, was sponsored by The Denver Post, Colorado Public Radio News, Denver7 and the University of Denver’s Center on American Politics. The winner of the June 30 primary will go on to face incumbent Republican Colorado Sen. Cory Gardner in November's general election.

Former state House speaker Andrew Romanoff debates Colorado Gov. John Hickenlooper in the studio of Denver7 in Denver on Tuesday, June 16, 2020. The debate, held ahead of the Democratic primary, was sponsored by The Denver Post, Colorado Public Radio News, Denver7 and the University of Denver’s Center on American Politics. The winner of the June 30 primary will go on to face incumbent Republican Colorado Sen. Cory Gardner in November's general election. (Photo by Hyoung Chang/The Denver Post)

If you're taking flak, the political saying goes, you know you're over the target.

The former two-term Colorado governor went head-to-head for 90 minutes with former state House Speaker Andrew Romanoff in a televised debate, the candidates' final meeting before ballots are due in the June 30 Democratic U.S. Senate primary.

The winner faces Republican U.S. Sen. Cory Gardner in the fall in a race that could determine which party wields the gavel next year in the chamber.

Capping a week that saw the primary's fundraising and polling leader take hits from all sides after receiving the largest fine in state history for ethics violations and a number of misstatements that drew national attention, Hickenlooper fielded steady jabs from his rival and pointed questions from voters and the debate's moderators.

"Are you out of touch with this moment in America?" CPR's Ryan Warner asked Hickenlooper after recounting several gaffes, including one comparing politicians to galley slaves and another when the former Denver mayor drew criticism for saying "every life matters" when asked to comment on the Black Lives Matter movement.

"The comments I made in 2014 caused pain, and I deeply regret them, and I apologize for them. And I’ve stepped on my own words on ‘Black Lives Matter,' " Hickenlooper said, adding that it's critical to "step back and recognize that slavery is the nagging, persistent shame of this country."

Referring to the protests sweeping the nation in the wake of the death of George Floyd in Minneapolis, Hickenlooper said, "It’s not just police reform — it’s housing, health care, education, jobs, opportunity."

Romanoff, for his part, was pressed on his support for sweeping government programs his critics — including Hickenlooper and Gardner — have labeled as nonstarters at best and, from GOP quarters, socialist nightmares.

Romanoff said national Democrats recruited — and have endorsed — Hickenlooper because of Romanoff's support for the Green New Deal and Medicare for All.

“This is the kind of tired demagoguery that has set our country back for decades," Romanoff responded, ticking off arguments made by opponents of Medicare, Medicaid and the Affordable Care Act.

"We’re not going to beat Cory Gardner simply by parroting his talking points," he added, staring at Hickenlooper. "We should not start these negotiations at the 50-yard line, in part because too often we find ourselves negotiating with ourselves."

Hickenlooper answered a question from a voter who wanted to know why running for the U.S. Senate was his second choice, a sentiment he expressed routinely during a short-lived presidential run last year that was amplified by a Gardner ad earlier Tuesday.

"There is no question I have badmouthed the U.S. Senate as a place that’s broken if you want to get things done, but at a certain point you have to decide if you want to get off the sidelines," he responded. "I’m more passionate about this than any campaign I’ve had in my life."

"They’re not going to attack me for breaking the state ethics law, because I didn’t, and I didn’t defy a subpoena," Romanoff broke in after Hickenlooper explained why he refused to show up for a virtual hearing before the ethics panel two weeks ago and blamed the ethics complaints on a "Republican dark-money group."

Romanoff was peppered with questions about his electability, after losing his last two runs for higher office in 2010 and 2014, Republican wave years when Hickenlooper won statewide.

“Do you want political power more than Coloradans want you?" The Denver Post's Justin Wingerter asked, prompting a chuckle from Romanoff.

"One of the things I learned outside of public office is that all the laws in the world are useless unless you actually enforce them," he said, noting that he served as executive director of Mental Health Colorado since his last run for office.

"I’m not the darling of Washington," Romanoff noted, but has been endorsed by some 400 current and former elected officials, including a few Republicans who praise his ability to get things done.

That's a theme Hickenlooper struck repeatedly, too, reviving applause lines from his White House bid about the approach to public policy he honed behind the bar at Colorado's first brewpub, which he founded in the late 1980s.

Asked why Colorado should have two Democrats in the Senate — joining Michael Bennet, the state's senior senator — Hickenlooper said President Donald Trump hasn't been restrained by the Republican Senate, which "empowers his behavior that in every regard is against the tone and even the letter of our Constitution. "

Noting that a Democratic win in Colorado would mean nearly all the Western states would be represented by a pair of Democrats in the Senate, he added: "I think the Mountain West is becoming a voice for responsible government on things like climate change and making sure universal health care is available at a reasonable cost for everyone."

"These bread-and-butter issues are things we know in the Rocky Mountain West. Democrats are demonstrating our commitment."

Both vowed to conduct regular town meetings across the state while throwing barbs at Gardner, who hasn't held more than a handful of traditional halls since Trump took office.

“I will be the most accessible senator Colorado has ever had,” Romanoff said, saying he'll to hold “hundreds” of outreach events, including in-person and virtual town halls and getting in a dig at Hickenlooper for skipping more than 20 candidate forums since late last year.

After recounting numerous efforts to keep in touch with Coloradans across the state when he was governor, Hickenlooper said he will hold “dozens and dozens” of town halls next year, if he’s elected to the Senate.

Prompted to assess his strength against Gardner, Hickenlooper said with a laugh, "There’s a reason why Republicans right now are spending a million dollars a week attacking me — it’s because they don’t want to run against me."

A spokesman for the Colorado Republican Party piled on Hickenlooper after the debate had concluded.

"While Romanoff clearly articulated his leftist vision, Hickenlooper stumbled and flip-flopped through the debate. Coloradans will stick with a leader who is actually producing results for every corner of our state, and that leader is Senator Cory Gardner."

Deriding a couple of Hickenlooper's verbal stumbles as "Michael Scott level cringe-y," National Republican Senatorial Committee spokeswoman Joanna Rodriguez described the former governor as someone who "can barely string together a complete sentence" in a statement that gave Romanoff style points while blasting his "extreme socialist policies."

Romanoff, she said, "remains committed to a far-left socialist agenda that would kill Colorado jobs and devastate rural health care. No matter which of these men moves on to the general election, it's clear neither of them has what it takes to face a tough candidate like Cory Gardner."

The debate was held in person in Denver7 studios, a change of pace after two match-ups held remotely last week due to social distancing measures. Denver7’s Anne Trujillo moderated the debate, which was aired on multiple broadcast and streaming platforms.

“I'm proud to announce my endorsement of my friend John Hickenlooper,” Salazar said in a statement. “He's someone who knows how to bring people together to get things done on behalf of all Coloradans, and he's the right choice to defeat Senator Gardner and bring change to a broken Washington."

PRIMARY 2020 | Analysis of Hickenlooper, Romanoff on the big issues

Tuesday, Colorado Democrats will pick a U.S. Senate nominee to represent the party against incumbent Republican Cory Gardner, a seat that could go a long way to determining which party runs the nation.

The 30-second ads go after Hickenlooper on two fronts with sharply different tones.