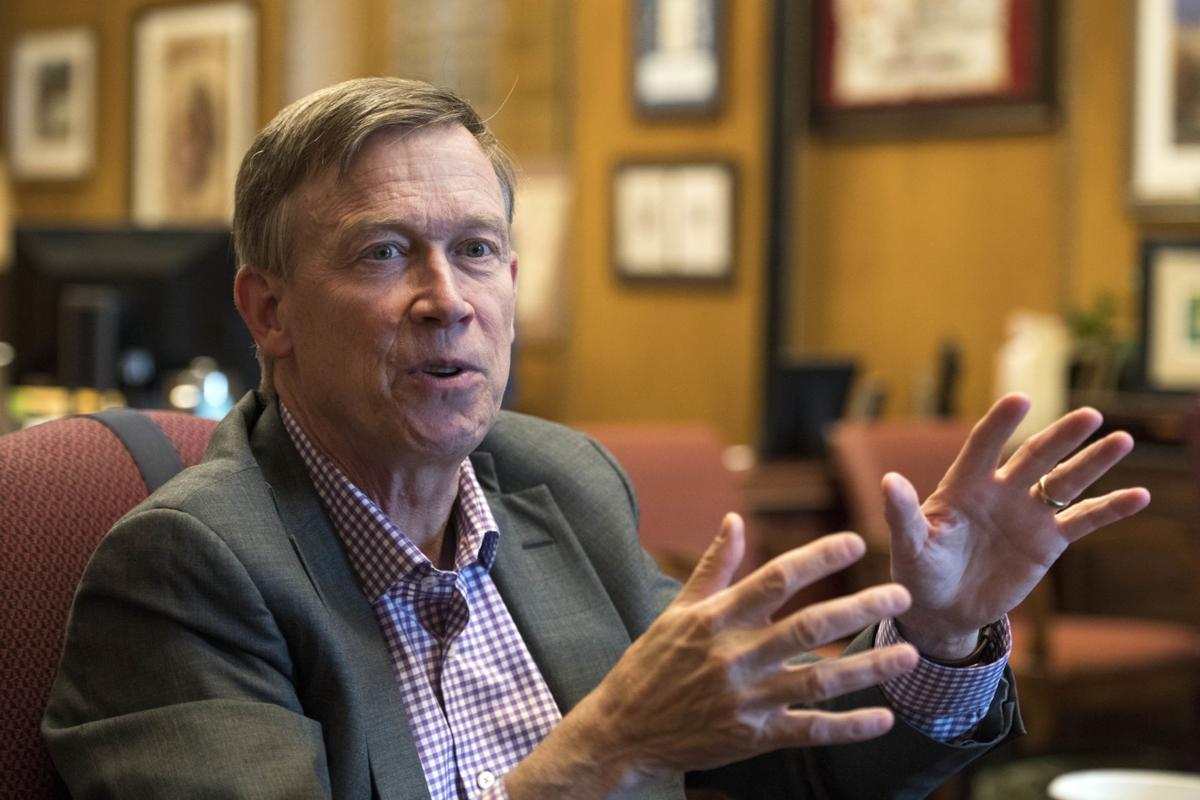 Gov. John Hickenlooper is pictured during a September 2017 interview with Colorado Politics in his office at the state Capitol in Denver. 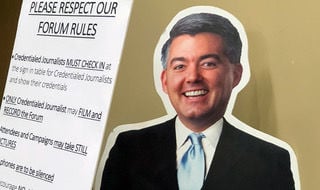 Cardboard Cory, a two-dimensional representation of Republican U.S. Sen. Cory Gardner, is situated next to a list of rules at a Democratic U.S. Senate candidate forum on Oct. 26, 2019, in Denver.

Gov. John Hickenlooper is pictured during a September 2017 interview with Colorado Politics in his office at the state Capitol in Denver.

Cardboard Cory, a two-dimensional representation of Republican U.S. Sen. Cory Gardner, is situated next to a list of rules at a Democratic U.S. Senate candidate forum on Oct. 26, 2019, in Denver.

Has anybody seen Cardboard Cory? I keep expecting to spot his flat face on a milk carton.

Democratic operatives rebooted the cutout that was a social media hit for, like, 10 minutes in 2017 and took him on tour again last summer. The message was to say incumbent U.S. Sen. Cory Gardner hasn’t held what they considered a fitting town hall event.

At such events, of course, progressive activists would organize protests and make the incumbent look bad on the evening news. This proposition of democracy translates into Gardner providing the stage for the political theater of his enemies. He went around them with less-publicized events for friendlier audiences, so back came his cardboard counterpart.

After awhile, some of us in the press noticed that Gardner's Democratic counterpart from Colorado, Michael Bennet, hasn’t been a regular face in Colorado, not even the controlled events Gardner was putting on. He held his first town hall in Colorado in 17 months the Friday evening after Thanksgiving. Gardner is at 27 months, depending on what you consider a town hall.

Bennet's absence from the senatorial duties at home is different, because, well, he's running for president, a state party official told me, then changed the subject.

In late August John Hickenlooper jumped in the Senate race, fresh off his ejection of his Democratic bid for president. Hickenlooper hasn't exactly been ubiquitous on the trail so far, certainly nothing like I remember from the races for mayor and governor I covered, when he was anywhere and everywhere and always had time to talk.

These days are different.

Hick, the affable governor we knew, skipped a candidates forum on climate change in October, a subject that could do the presumed frontrunner serious damage. It was an unexplained scheduling conflict not a political dodge, his campaign said in a statement emailed to the press.

He's missed other events for candidates, as well, noticeable for a guy late to join the race.

My phone rings all day long. I talk to Republicans, Democrats and everything in between about what they predict is about to happen. More often these days, we size up Hickenlooper's campaign challenges more than his challengers.

Take out a pencil and paper, governor. I've got some advice from friends and foes.

First, dump the D.C. advisers and talk to people and press you know. Operatives and surrogates can't do it for you, at least not the right way.

That's not Hick, who is more Pueblo than Potomac. A closed off, safe-playing Hickenlooper is not the LoDo barkeep we know. He's a Washington politician we don't.

RELATED: Hickenlooper spiked the ball with his veto pen

To the dismay of other candidates and the Democrats who back them, Hick's party seems eager to help him. Ask Hillary Clinton how that works out. The party so far isn't doing debates, the kind of encounters that allow voters to draw clear distinctions between the candidates.

Instead, Democrats are staging forums that won't test individuals beyond their ability to generally recite party-line talking points. That favors Hickenlooper, because voters already know him, and the less the front-runner is tested, the stronger he looks.

I had breakfast with one of the state’s best Democratic campaigners recently. He isn’t working on any of the Senate campaigns, but he made a case: Not only is Hickenlooper doing the right thing by being missing in action on the campaign trial, but he should do more of it. Go raise money. He's going to need it.

In fact, the smartest thing for Hickenlooper to do would be to leave the country and talk to international leaders about international affairs until the primary is decided, he said.

Here's the reasoning. Gardner’s greatest asset, besides a rare talent for retail politics, is his prominent role in foreign affairs. His resume includes standing up to North Korea and Vladimir Putin. Hickenlooper's resume includes opening a bar and working with Aurora and Utah.

The more Hick talks, the more his party's liberal base is reminded that he’s a moderate who tries to get along with Republicans. They won't vote for Gardner, but, turned off by Hickenlooper, they might not vote at all. Ask Hillary Clinton how that works out.

Remember, Hickenlooper was the presidential candidate booed by a Democratic audience in California when he said socialism is a bad idea. Hick is the state leader who had to be dragged kicking and vetoing into legal marijuana.

Have you gotten a load of the leftward tilt of Denver lately, the first American city to decriminalize magic mushrooms? If Hick can’t win big in Denver, a city where he was re-elected as mayor with 88%, then he can’t win, period.

That’s a gamble that keeps Democratic donors in D.C. up at night.

He’s cold on the Green New Deal, specifically that it does too much too fast. You can bet his fellow candidates in the primary are eager to remind voters the former energy company geologist was friendly and cooperative with the fossil fuel industry.

The more people question the frontrunner, a politics shape him, the more chaos it creates for his party.

This race might wind up Cardboard Cory versus Hick in a Box.

If former Colorado Gov. John Hickenlooper becomes president, his administration will have a White House Council on Boys and Men.

Ha. Hick in a box. That was clever JB.