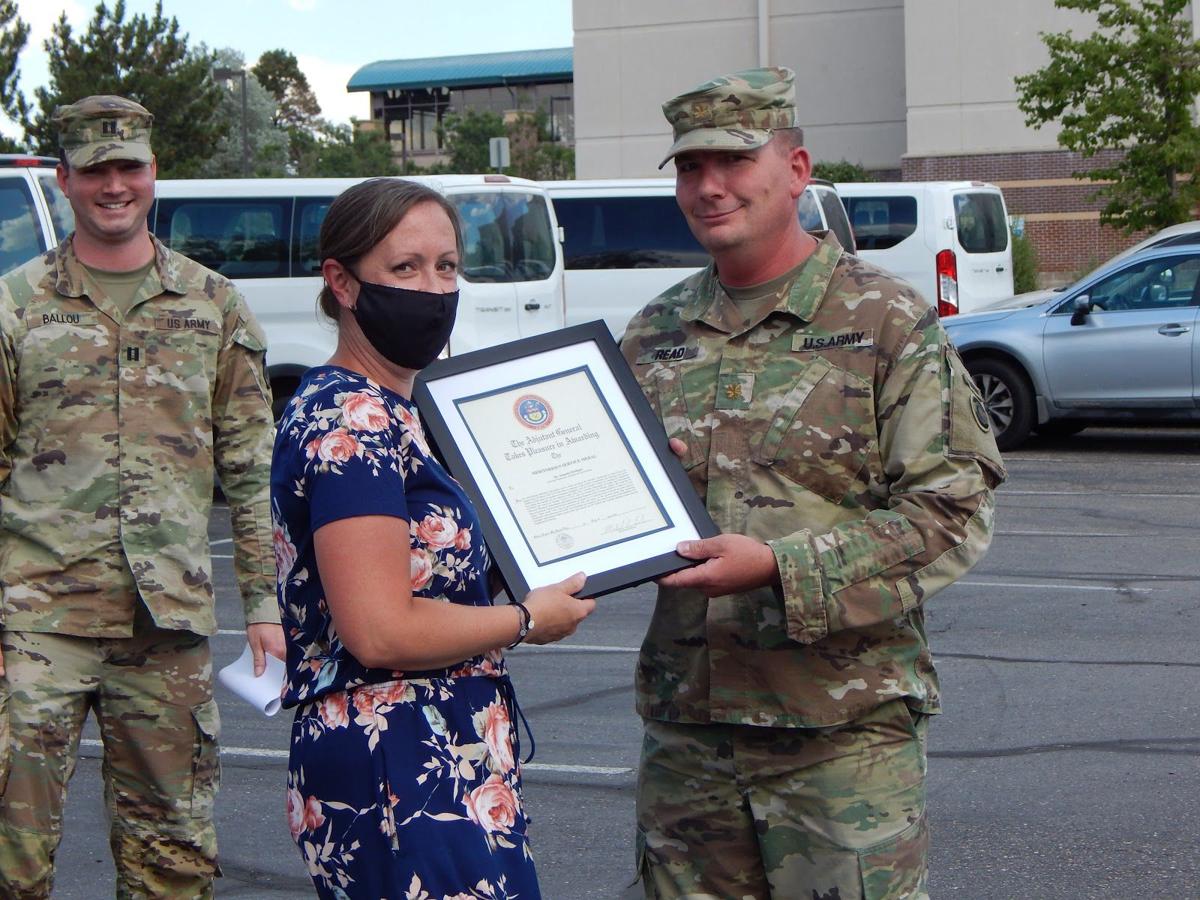 Amanda Hettinger, an exercise coordinator for the Colorado Department of Public Health and Environment, accepts a Meritorious Service Medal, the highest civilian award presented by the National Guard, from two unidentified officers. 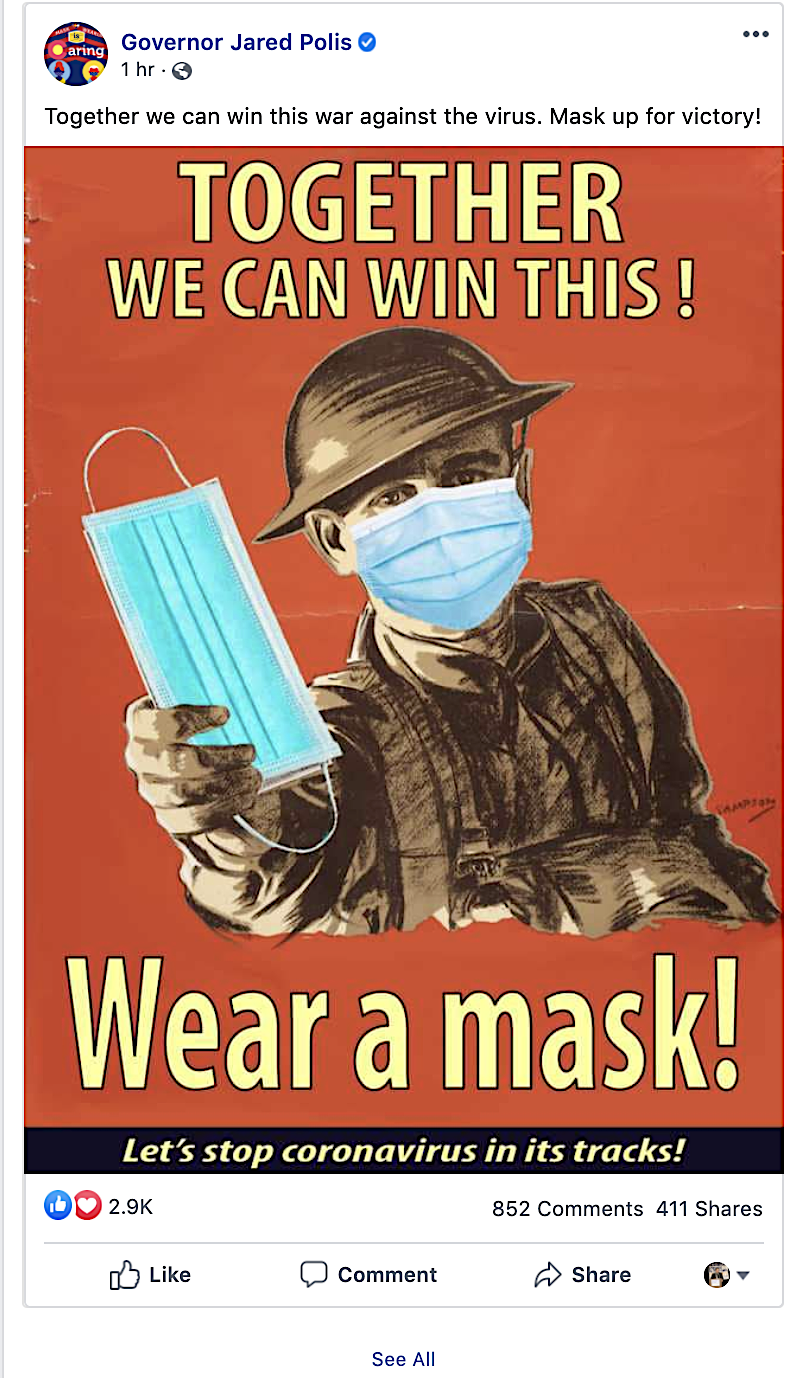 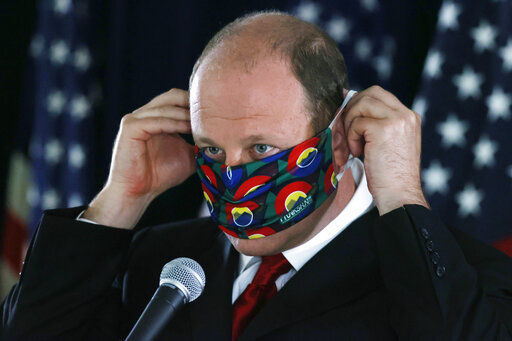 FILE—In this Thursday, May 28, 2020, file photograph, Colorado Governor Jared Polis puts on his face mask after a news conference about the state's efforts against the new coronavirus in Denver. During a news conference Tuesday, June 2, 2020, Polis said that the state is adding more than 800 new contact tracers to Colorado's coronavirus testing effort. (AP Photo/David Zalubowski, File) 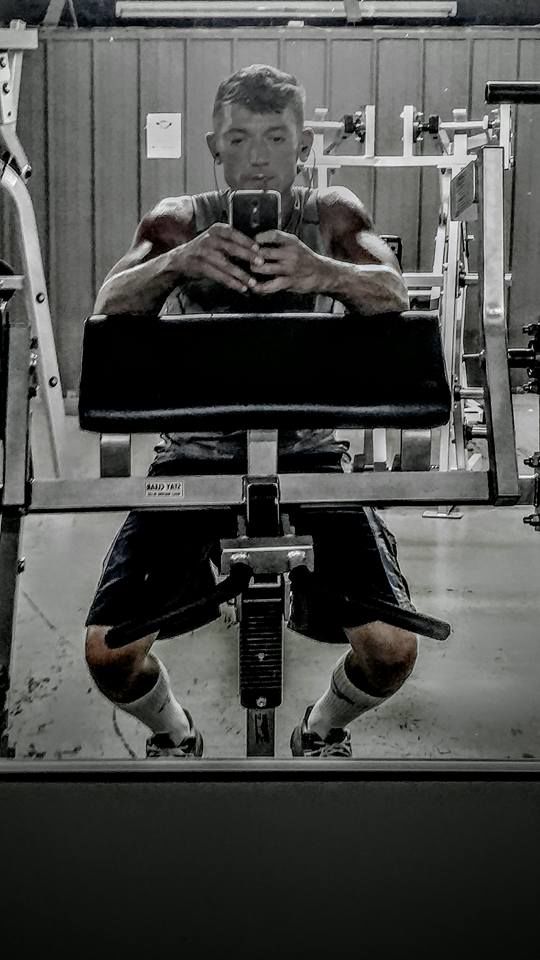 Amanda Hettinger, an exercise coordinator for the Colorado Department of Public Health and Environment, accepts a Meritorious Service Medal, the highest civilian award presented by the National Guard, from two unidentified officers.

FILE—In this Thursday, May 28, 2020, file photograph, Colorado Governor Jared Polis puts on his face mask after a news conference about the state's efforts against the new coronavirus in Denver. During a news conference Tuesday, June 2, 2020, Polis said that the state is adding more than 800 new contact tracers to Colorado's coronavirus testing effort. (AP Photo/David Zalubowski, File)

My nephew Josh Morgan died last weekend in Alabama. He was a 38-year-old construction worker with an Alabama Crimson Tide tattoo on his arm. He didn’t feel well one day and died in his bed at home the next. My memories race by like a flip book from the last time I saw him to the first time I held him as a baby.

He is just another of the 135,991 coronavirus deaths to you.

That’s what Amanda Hettinger is doing. The exercise coordinator for the Colorado Department of Public Health and Environment received a Meritorious Service Medal for her tireless service to Coloradans in the fight against COVID-19.

She set up 33 testing sites to detect the illness and slow its spread. She wore a mask to the awards ceremony in Highlands Ranch, continuing to demonstrate her compassion for strangers.

The press release included a picture of Hettinger and two military officers, both grinning, neither wearing a mask, one within inches of the essential honoree, neither of them identified, presumably because no one is proud of how they're acting.

Gov. Jared Polis, their commanding officer, has a dim view of shirking masks.

“The Governor encourages everyone to wear a mask at all times and hopes this doesn’t distract from the amazing work Ms. Hettinger and the members of our National Guard have done in response to the COVID-19 pandemic,” said the governor’s spokesman, Conor Cahill. “The commander removed his mask briefly to present the award. This should not detract from the leadership and efforts Amanda Hettinger has conducted on behalf of her fellow Coloradans.”

He’s right: The National Guard is made up of our friends and neighbors who protect this state at home and abroad. In my career chasing the worst nature could throw at numerous states, it was always the Guard out in it doing what they could to save lives and ease suffering.

The next day at his coronavirus briefing, Polis said, “If I haven’t been clear, wear a damn mask.”

And just to make sure he was clear, he posted on his Facebook page on Sunday, "The emerging scientific data is clear: wearing a mask doesn’t only protect others, it also significantly reduces your own risk of getting Coronavirus. So if you’re a selfish bastard and wearing a mask to protect others isn’t enough of a reason to do so, then maybe protecting yourself is?"

The unidentified officers in that press photo are military leaders, but they didn't show leadership. It was visual permission for others not to take this seriously.

"If you say, 'It doesn't matter whether you put it on or take it off,' you’re giving a wrong, mixed signal," he said. "The message should be, 'Wear a mask, period.'"

I asked the governor’s office and the National Guard for the officers’ names. I wanted to give them a chance to say their piece. Was it accidental or political? I was told I couldn’t talk to them because they were too busy working on the pandemic, and it’s also against policy for the National Guard to identify people in a picture sent out with a press release. That's what they said. I asked to speak to the adjutant general, Michael Loh. He was unavailable, too.

I wanted to ask what they would do if they gave an order that was publicly flouted.

The Colorado National Guard spokesperson, Emily O’Bryan, said the commander “removed his mask to present the state meritorious service medal to Amanda Hettinger, resulting in minimal exposure during a quick ceremony that took place at the end of the testing day. However, this is a reminder that we all need to do better to remember to wear face coverings, if we cannot socially distance, in accordance with the Governor's executive order to prevent the spread of the virus.”

I put in an open records request to see if the officers discussed the ceremony or the politics around it. The Colorado Department of Military and Veterans Affairs said it found no written records — at all — related to the award or the ceremony, which is hard to believe for a statewide honor described in the press release as the highest civilian award presented by the National Guard. Apparently it's a word-of-mouth thing.

I put in a request with the governor’s office to see if Polis or his Capitol lieutenants spoke formally to the National Guard about expectations going forward, but his legal staff didn’t turn up anything, either, I was told.

Failing evidence to the contrary, this appears to be an unforced error to an unenforced order that is unrecorded.

In other news this week, the Trump administration wants to get the National Guard involved in collecting COVID-19 data at hospitals.

If we can’t count on politicians and our normal heroes, then let’s look out for each other.

INSIGHTS | Nature is the social distancing we all need right now

Joey Bunch: "It's counterintuitive that we’re keeping up the barriers between Coloradans and the great outdoors, where wide open spaces can put meaningful distance into social distancing."

INSIGHTS | Is Melania Trump’s birthday worth dying for? Some think the freedom to celebrate it is

Joey Bunch: "If you're going, wear a mask. Patrick Henry said 'give me liberty or give me death.' It doesn't have to be both. It's also self-defeating to say we can responsibly reopen the economy while acting irresponsibly."

INSIGHTS | For at-risk workers, their food is our food

Joey Bunch: "I'd greatly prefer the people who handle my food have every opportunity to avoid getting sick, but all I can do is wash and hope."

INSIGHTS | Mental health is the next coronavirus wave

Joey Bunch: "While policymakers and the private sector sort out the debris of the global coronavirus tragedy, the mental health of many will factor heavily into the losses, as certainly as a washed-out bridge in a flood."

The statehouse coalition put out a video on social media asking Coloradans to look out for one another, with tips to make it easier.

Colorado Gov. Jared Polis talked about the state's push, including the mandatory mask order, against COVID-19 during his Sunday morning appearance on "This Week With George Stephanopoulos" on ABC.

Joey Bunch: "More and more relief from the economic devastation of the coronavirus feels like a pipe dream, but politics has always had a way of making the blind see and the lame dance, if you listen to operatives tasked with creating an Election Day reality."

Colorado's entire congressional delegation, Republicans and Democrats, are asking President Trump to extend funding to the National Guard to help combat the coronavirus pandemic in the state.

Amid growing calls from Democratic lawmakers, small business owners and an online petition, multiple sources have told Colorado Politics that …