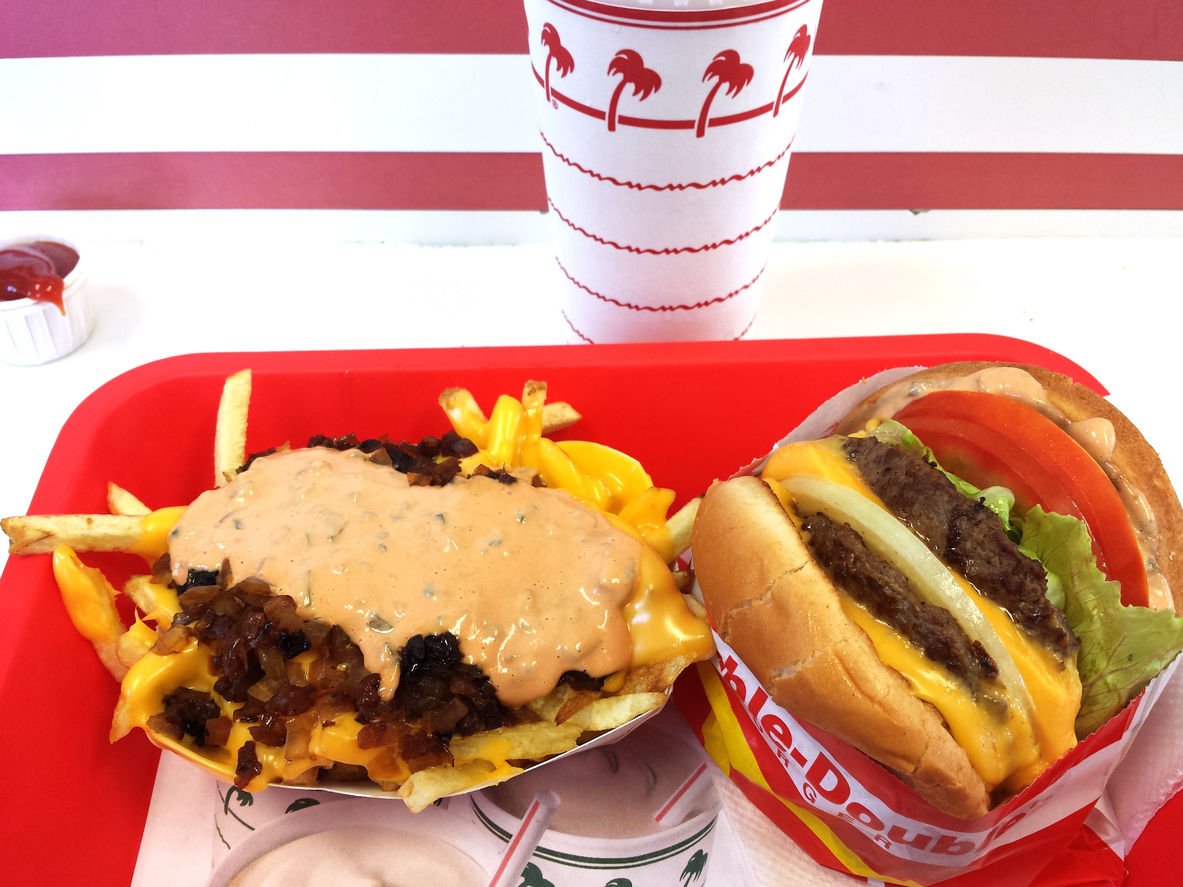 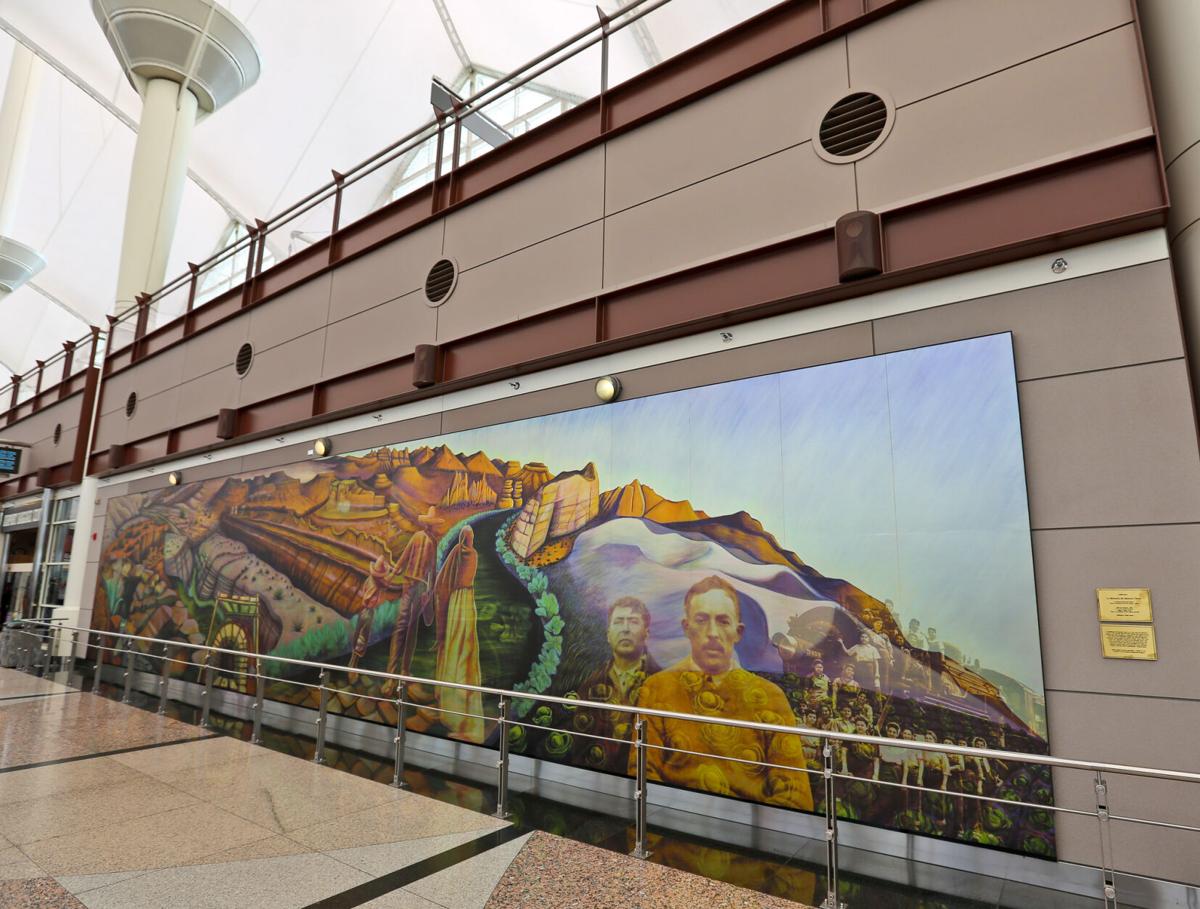 The mural La Memoria de Nuestra Tierra, or Our Land Has Memory, by Chicana artist Judy Baca is displayed on the fifth level of the main terminal at Denver International Airport.

The mural La Memoria de Nuestra Tierra, or Our Land Has Memory, by Chicana artist Judy Baca is displayed on the fifth level of the main terminal at Denver International Airport.

Last Sunday morning, I scampered over to Aurora for the first time to the new In-N-Out Burger. I’ll get there early, I thought, to beat the crowd. Dozens and dozens of vehicles creeped along in rows around and around in a shopping plaza parking lot marked off by cones.

I peeled out of line after about 45 minutes. Two to three hours is normal, a person directing traffic told me; 12 to 14 hours is not unheard of.

A disclaimer for my cardiologist, because the two-year anniversary of my heart attack is coming up. I’m not even supposed to be here, much less in line at In-N-Out Burger.

A burger with mustard has slightly more fat and sodium, but fewer calories, fewer carbs and half the cholesterol of my usual grilled chicken sandwich from Chick-fil-A. In-N-Out lets you order it without salt, too. Mickey D would look at you like you’re crazy.

Planning ahead and being reasonable makes room for an animal-style burger, hold the fries and shake. Most people aren’t reasonable, though.

That got me to thinking about politics, because lack of reason is a critical condition these days. Plus, In-N-Out came from California, like a lot of Colorado politics.

Like government, as well, the wait is a necessary evil.

Soda cups bear a Bible verse, John 3:16 (“For God so loved the world, that he gave his only begotten son, that whosoever believeth in him should not perish, but have everlasting life”). Milkshakes serve up Proverbs 3:5 ("Trust in the Lord with all thine heart; and lean not unto thine own understanding").

If the Bible can sell a partisan point of view, then it can sell soft drinks, too.

Nonetheless, In-N-Out is a rock-solid monument to American capitalism.

The place doesn't franchise. Every napkin is owned by the Snyder family alone. The menu has 15 items, just about the same as they've always been. The meat is never frozen. The buns are baked daily. The fries are fried in sunflower oil, and you’d sooner find a vegetarian than a microwave at In-N-Out.

It had humble beginnings in 1948 in a block building of 100 square feet, around the corner from the home of 35-year-old Harry Snyder and his 28-year-old wife, Esther, in Baldwin Park, California, east of Los Angeles.

“Within three years, In-N-Out Burger had become an unqualified success,” according to the book “In-N-Out Burger: A Behind-the-Counter Look at the Fast-Food Chain That Breaks All the Rules.” “Long lines of cars snaked along gravel drive-through lanes at all hours, causing 'burger jams,'” just as they do in Aurora and Colorado Springs today.

The concept of the outdoor intercom speaker box born in Harry's home garage endures to this day. The passenger-side cigarette vending machine did not.

Baldwin Park was only otherwise in the news in 2005 when the anti-illegal immigration group Save Our State protested over a 12-year-old public art display at the town train station.

The city approved and paid for the 20-foot mission arch and tiled plaza, called Danza Indigenas, Indigenous Dance, to honor the area’s original inhabitants. People of Hispanic descent make up about 80% of the city of 75,000.

Save our State took offense to two inscriptions on the monument. "This land was Mexican once, was Indian always and is and will be again" is one. The other is, "It was better before they came."

Save Our State took that to mean White people and staged a series of summer protests admittedly aimed at financially pressuring the city to break its bank on police overtime in the cradle of the Double Double.

That issue is closer to Colorado than the newly tangential burgers, though.

The work was designed by Chicana artist and UCLA professor Judy Baca. That name should sound familiar.

She provided the mural La Memoria de Nuestra Tierra, or Our Land Has Memory, on the fifth level of the main terminal at Denver International Airport. It honors those who came before us in the West.

Baca’s grandparents fled the Mexican Revolution between 1910 and 1920 and settled in La Junta in southeast Colorado. Her mother was born in Otero County and educated in a segregated school system before she left for Los Angeles, where she worked in a tire factory. Baca, who’s 76 now, was raised in Watts. She depicted her Colorado grandfather, Teodora Baca, in the DIA piece, along with Chicano Movement leaders, including Denver’s Corky Gonzales. The message is that the land keeps account of sojourners, a wall-sized message hard to contain along the rim of a soda cup.

The problems of the world can’t be solved with mustard and grilled onions, though I wish they could. At least it’s something every time you put in an order. You can’t say that about politics or government.

Nonetheless, there I was giving my time over to gluttinous sin on a Sunday morning. If you’re waiting hours in line for a burger, you’re being unreasonable.

However, if we unreasonably treat our democracy like we’re washing down an animal style 4x4 burger with a Neapolitan shake, we deserve the problems we ingest.

INSIGHTS | My chicken sandwich is unaffiliated

Only in America would we politicize a chicken sandwich.

Insights: California, here we come, if you follow the hyperbole

How did it get to be fashionable to beat up on California again? Going on 16 years ago, when I was a newcomer to our great state, both Texas and Cali were Colorado’s straw men.

Denver, our good neighbor to the north, may get jealous over this latest development.

We won’t always get the gold, but we should at least stop quitting at some point.

Joey Bunch: "Congress holds investigations, but our legislature only writes and votes on bills. The best the Legislative Audit Committee could do is order a performance audit of the Secretary of State's Office."

Joey Bunch: "The politics of getting paid and the politics of hard work aren’t always the same thing, which a lot of us learned the hard way as we got older."

INSIGHTS | The federal stimulus means life and liberty in Colorado

Joey Bunch: "In Washington, the people who talk so much about standing for the people need to step up and, as the new president might say, cut the malarkey."

Colorado this year will graduate its first class of kids who have never known a fully funded education system. It's been 12 years since the legislature engineered a way to get around voters' wishes to grow support for schools by inflation plus 1%. Lawmakers borrowed the money from schoolkids. The ledger bleeds red every year, until the gap has reached $1.15 billion.