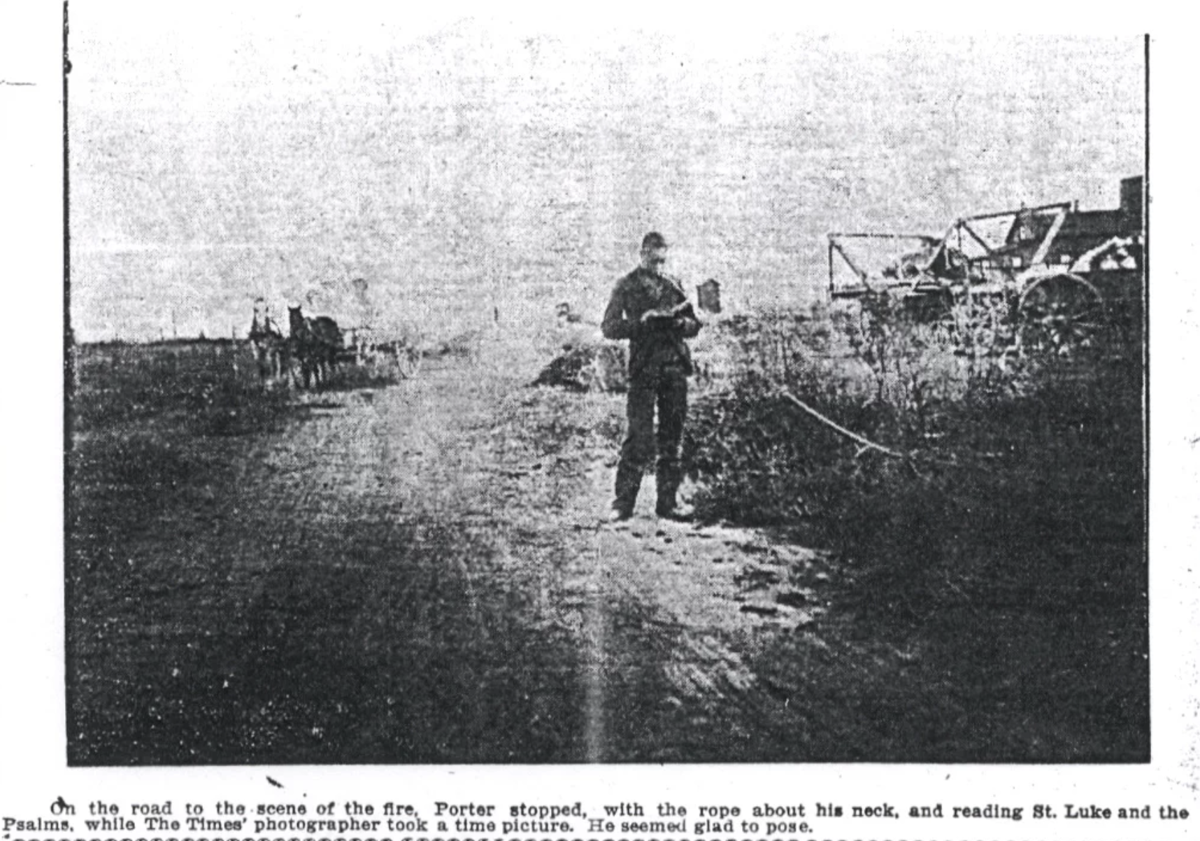 Preston Porter Jr. is led by rope around his neck to the site where he was burned to death. He was allowed to read a Bible. 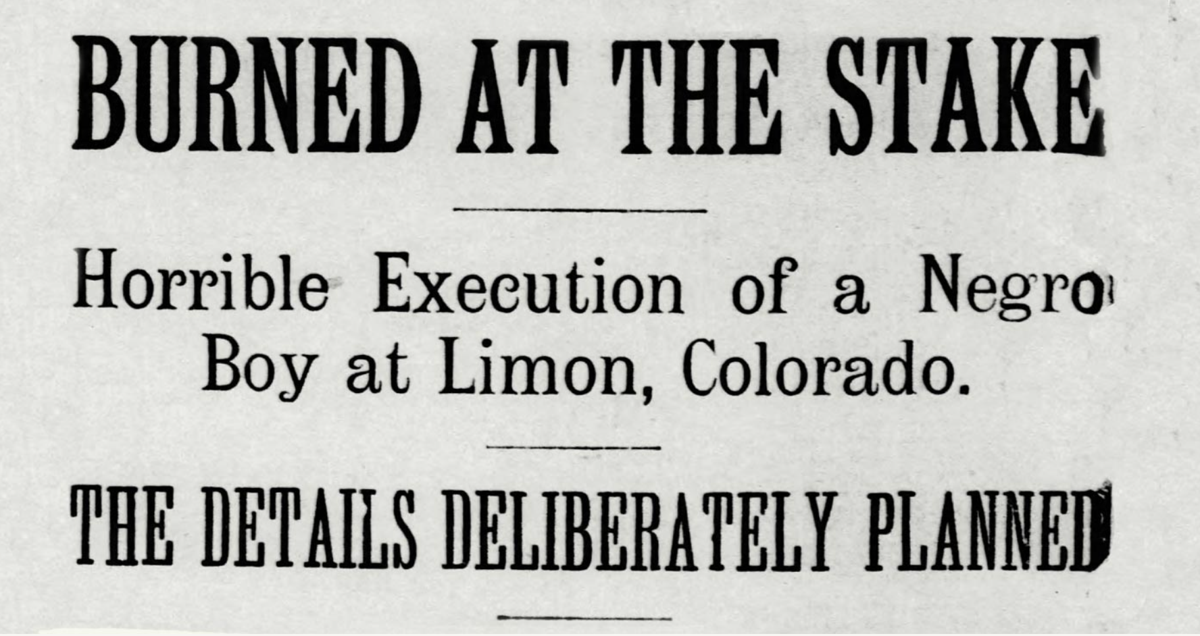 Newspapers reported on the vigilante death of Preston Porter Jr. in Limon in 1900. 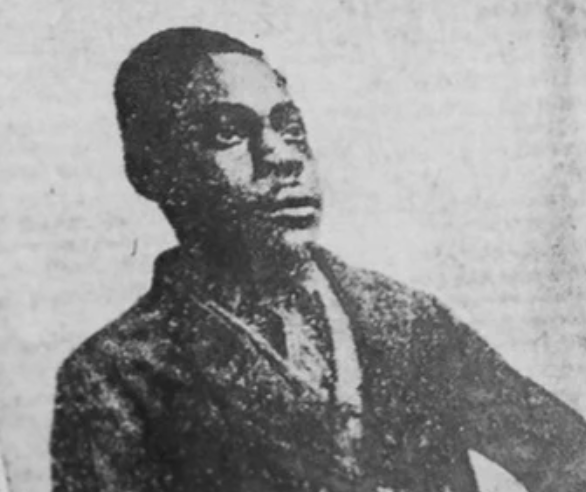 This picture is believed to be Preston Porter, who was burned to death in Limon on Nov. 16, 1900.

Preston Porter Jr. is led by rope around his neck to the site where he was burned to death. He was allowed to read a Bible.

Newspapers reported on the vigilante death of Preston Porter Jr. in Limon in 1900.

This picture is believed to be Preston Porter, who was burned to death in Limon on Nov. 16, 1900.

The city of Denver and the state of Colorado took pause this week in the name of Preston Porter Jr., stepping in 120 years too late.

That’s lofty for a 15-year-old railroad worker. Unspeakable torture and terror should be worth something.

Preston was Black. He, his father and 27-year-old brother, Arthur. All three were working on the Kansas-Pacific Railroad 5 miles outside of Limon that day, Nov. 8, 1900, a Thursday.

That afternoon, 12-year-old Louise Frost, the daughter of a local sheep rancher, Robert W. Frost, climbed aboard her wagon to head home after school.

She stopped to buy penny candy at the mercantile and gave another girl a ride part of the way home. As the cold evening set in, her team pulling an empty wagon arrived in her family’s yard. The candy and quilt Louise would have wrapped herself in were undisturbed on the seat of the wagon, a local historical account has it.

Preston’s troubles were only beginning.

A search party formed and soon found Louise cast down a ravine barely alive, her moans attracting her finders, before she died from her injuries.

“Both the Denver Times and the Rocky Mountain News reported that the young girl had a total of 14 stab wounds inflicted to both breasts, the neck and forehead, and a gaping gash the entire length of her right thigh,” according to HistoryNet. “Her skull was fractured from the impact of a heavy boot or boots, and she had been raped.”

The Denver media set a match on the sensational story by reporting the attacker was believed to be one of the Black itinerants working on the railroad, because who in Limon, a town of 150 white people, could do such a thing?

Preston was the best suspect they had.

He had taken a day off work to hang out with a friend in town until 1:30 p.m., when he left to make it back to the camp by 6 for dinner. The mess cook confirmed he was there, but Preston had no one to vouch for his whereabouts most of the afternoon.

The sheriff found burned clothes near the boxcar where he lived, and his boots matched tracks at the scene, law officers alleged.

Preston was in town to cash his paycheck when he was arrested and hauled off to the Denver City Jail. There, he was tortured until he confessed. He wrote that he was confessing to save his brother and father.

Preston was sent back to Limon on Nov. 16, a Friday. Newspapers in Denver reported the time the train would arrive in Limon. The lynch mob was even predicted by the press.

Reportedly, 300 men were there, including those on the train from Denver and others who came from as far away as Colorado Springs.

The girl’s father chose the manner of death, burning him alive. An iron rail was driven upright in the ground. They put a rope around Preston's neck and marched him to the site, allowing him to read from the Bible, the Book of Psalms and the Gospel of St. Luke's, as he walked to his certain death. He arrived at 4 p.m., and he wasn’t burned until 6:23.

Hands over his head, Preston was lasted to the iron rail with ropes and chains and surrounded with oil-soaked kindling. Robert Frost lit a rag and ignited the pyre.

Preston screamed for 12 minutes until the flames overtook him, according to accounts. Guilt or innocence ceased to matter.

Pinkerton detective Frank Murray, who later pursued Butch Cassidy and his gang, investigated the girl's death and found holes: Louise was last seen alive at about 4:30, not enough time for Preston to make it back to camp for dinner 5 miles away at 6. The undisturbed candy and blanket in the wagon led him to believe Louise knew her killer and left the wagon voluntarily.

No one was ever arrested.

Well-meaning politicians — not all of them were — played a role. Three years earlier, in 1897, Colorado was one of the first states to abolish capital punishment. In 1901, the gallows returned after vigilante justice surged, as the citizenry did the dirty work the government would not. Hanging was the lone method for state-sanctioned killing until it was replaced by the gas chamber in 1934.

The General Assembly repealed the death penalty again this year.

Gov. Jared Polis signed a proclamation making Monday Preston Parker Jr. Day. He is the first Colorado governor to make such a declaration.

He cited the memorial in his proclamation, “so that all may know of this history and so that we can reckon with the realities of our past, reconcile one to the other, and move forward together to a more just future.”

The legacy of Preston Porter Jr. focuses solely on how he died and why, but it's a monument to failed justice. You could say the same for George Floyd or Elijah McClain.

A 15-year-old screaming in the flames should remind us of the depths people can sink to when vengeance stains justice.

Did a killer walk free in Limon that day? We will never know for sure, because law enforcement, public officials and Denver's press did nothing but fan the flames of racial hatred.

Louise Frost was buried in Denver’s Fairmount Cemetery. Preston was burned to ash, his legacy surrendered to the prairie wind.

INSIGHTS | A viral instant in Denver feeds a political maw

Joey Bunch: "Jennifer at first thought she was dealing with a body and glass damage and a slowing heartbeat, until her neighbor handed her his phone. The video was trending on Twitter. That's how she found out."

INSIGHTS | Crime and punishment are political players in Colorado this year

Joey Bunch: "They have a fondness for a rascal Down South, and this election will tell us if Colorado does, too."

The Galleria mall in Hoover, Alabama, a Birmingham suburb, seemed as much a carnival as it w…

INSIGHTS | In Roy Moore's Alabama, old times there are not forgotten

It was unusually cold and snowy across Alabama the Saturday morning before the special election, when I burst into a local Republican club’s Christmas breakfast. I knew a handful of the large group gathered in the back dining room at Kelly’s Kitchen.

As of Friday morning, more than 42,000 people had signed its online petition opposing reinstatement of officers involved in a prank related to Elijah McClain's death.

Joey Bunch: "Colorado Democrats have their own problems, including a splintering party. Last year, a handful of qualified women of color were in the primary for U.S. Senate. None got traction, and ultimately the party oversaw the race as it dwindled down to two white guys."

INSIGHTS | Colorado teeters at the edge of reason

Joey Bunch: "This isn’t just about one school where they did a boneheaded thing with all kinds of consequences. This is about getting ourselves together, Colorado. When it comes to being reasonable, we’re fraying at the edges."

At the Colorado Capitol, members of the General Assembly's Democratic Legislative Black Caucus met in the former Supreme Court chambers to comment on Tuesday's historic moment.