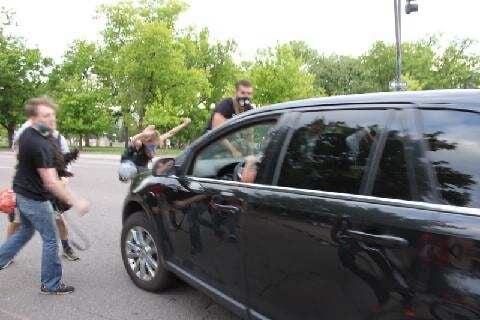 This is the inside view from Jennifer Watson's SUV after a run-in with protesters in downtown Denver on May 28, 2020.

This is the inside view from Jennifer Watson's SUV after a run-in with protesters in downtown Denver on May 28, 2020.

I’m not sure how I feel about Jennifer Watson. I talked to her on the phone on a Friday morning, but I've never met her, never walked in her shoes, never kicked up the sand of her political beliefs.

I just don’t know her. That’s how Jennifer feels, too. She doesn't know the person portrayed in the media as her. Yes, that was her behind the wheel in 10 seconds of a viral video from Denver last May, but from there it gets complicated.

You’ve seen it, the dark SUV at Colfax Avenue and Broadway near the Capitol, swarmed by yelling, running young people protesting the death of George Floyd three days earlier in Minneapolis.

One instant, Jennifer told me, she was creeping through; the next there was a man on her hood and her windshield was broken. She didn’t know a protest was going on downtown on May 28, she said, until she was in it.

Her dog, a shelter hound named Blue, was growling and going crazy to defend her inside, Watson said. Her windows were partially down, leaving her more exposed.

The widely tweeted video begins with a man later identified as Max Bailey already atop the hood of Watson’s rolling SUV, before he leaped off to his left. When she swung the vehicle, unsure which direction she was headed, she clipped Bailey, who rolled on the pavement, jumped to his feet and chased after her with others. Jennifer said she never saw him in the chaos. He was in a blind spot, I'm guessing, as the vehicle spun to the right. Think about it. Her windshield was cracked badly in the center and to the right.

“I wasn’t thinking full thoughts,” she said. “There wasn't any intent, any planning or thinking I'm going to do this or that. It happened too fast. I was scared, and I just wanted to get out of there. That's all I was doing.”

What she described was more textured than the video, which, frankly, evoked Charlottesville, Virginia, in 2017, when a white supremacist drove intentionally through a crowd of protesters killing civil rights activist Heather Heyer. The driver, James Alex Fields Jr., mercifully got life in prison.

Jennifer is a 37-year-old interior designer who is white. She doesn't support racists and can't think of anybody, before that day, who would accuse her of it. She spoke of her diverse group of friends and dating outside her race.

“My friends who are Black told me, ‘That’s not you,’ ” she said of the social media attacks.

Jennifer at first thought she was dealing with a body and glass damage and a slowing heartbeat, until her neighbor handed her his phone. The video was trending on Twitter. That's how she found out.

The TV news said the cops were looking for the driver. That was never true. She already called the cops about the damage to her vehicle.

“So many lies have been told off that Twitter video,” she told me.

It was a hell of a price for driving home, but the next five months were just getting started.

She went into hiding, closed her social media accounts, asked friends to take down pictures of her online, pulled back on expanding her business and screened all her calls. Threats and curses rolled in for days, and she kept a watch outside her house, worried about strangers and cars that would slow down as they passed by.

Jennifer is still facing misdemeanor vehicular assault charges. The Denver District Attorney’s Office has not pursued charges in much worse situations, she pointed out, including police officers killing Black men. She’s convinced her case is closer to politics than justice.

Let's say I don't believe her. Let's stipulate she was angry about traffic and lashed out with her fender. Should any of us be summed up by our 10 worst seconds, if no one was injured, and it's a technicality to say the law was broken?

I’ll tell you one of the worst things I ever did.

In Alabama in the 1990s I snuck into a hospital room with supermarket flowers and a cover story. I needed, I thought, to describe the room occupied by the state’s first right-to-die patient, Corrine Salter. I’d been to her hometown and talked to everyone who knew her who would talk to me. No laws were broken, probably, but that invasion of an innocent person's privacy shattered my moral code about treating people the way I’d want my Uncle Grady treated. I’d beat a man who disrespected Uncle Grady that way.

My horrible idea was hatched and executed in 30 minutes. Twenty-five years on, hardly a week has gone by that I'm not back in that room, dark and cool. You had to know the tiny newspaper where I started and where I hoped to go someday. The ride wasn’t free.

The point is, we all have stories, and there's a gulf of difference between holding someone accountable and creating a straw man to beat up on in a paucity of understanding, like 10 seconds of frantic video.

If you never stumbled into something you wish you hadn't, you alone can judge Jennifer Watson.

INSIGHTS | Heroes of the pandemic are vaguely known

Joey Bunch: "The hero, in my book, is the common man, woman and non-binary individual who faced down the plague and panic and fought back with a broom. They are the truck drivers, the GrubHub deliverers, the grocery clerks, the fry cooks and especially the doctors and nurses."

Hickenlooper calls for a presidential apology for slavery

The Galleria mall in Hoover, Alabama, a Birmingham suburb, seemed as much a carnival as it w…

INSIGHTS | Denver’s race issues fueled by the flames of history

Joey Bunch: "The legacy of Preston Porter Jr. focuses solely on how he died and why, but it's a monument to failed justice. You could say the same for George Floyd or Elijah McClain."

INSIGHTS | A compilation of the best columns from Joey Bunch

It's a snowy day, so curl up with a hot drink and peruse some of senior reporter Joey Bunch's best columns from the year 2020 to today.

Wall around the Capitol is a longshot, legislative leaders say

A suggestion of a barrier around the Colorado Capitol has had lawmakers on both sides in a tizzy the last few days, but on Friday that possibility seemed to fade in the rearview mirror.