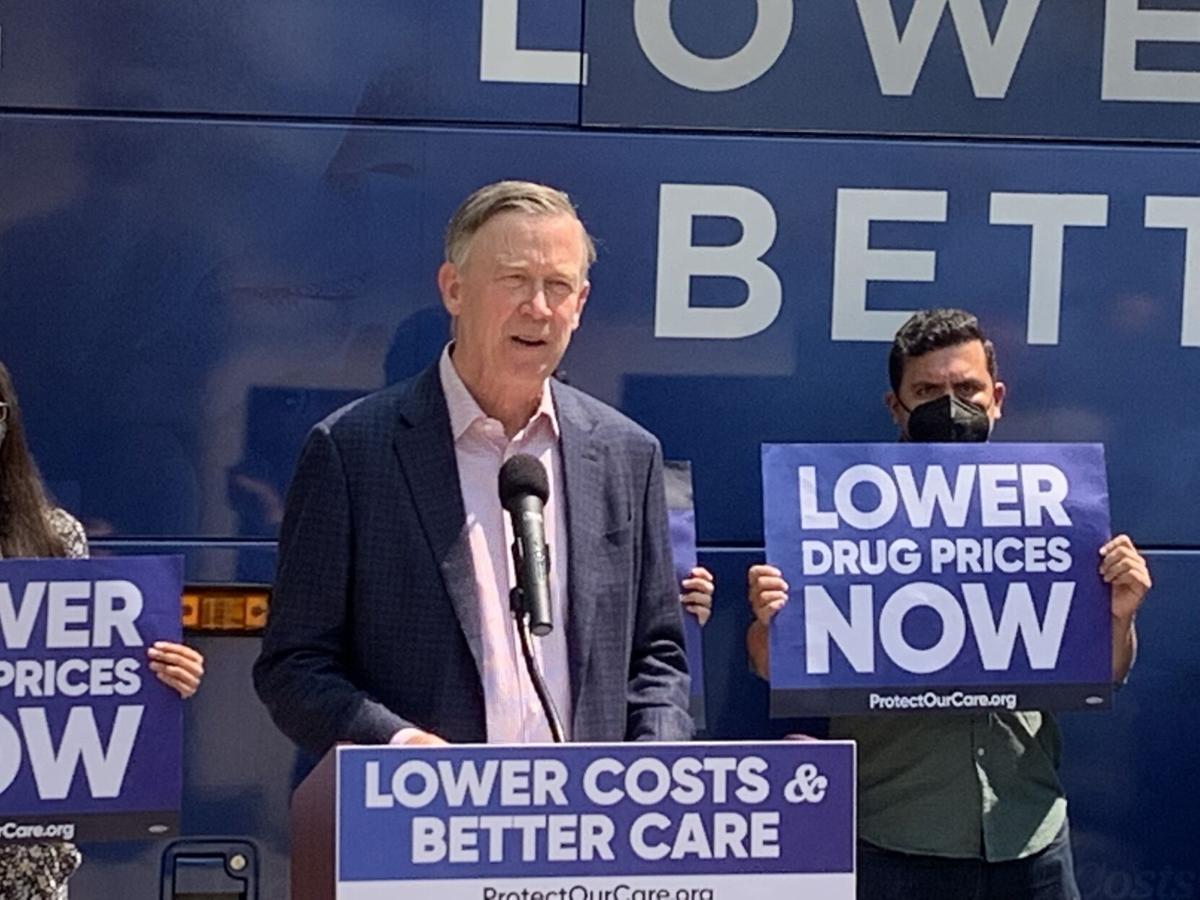 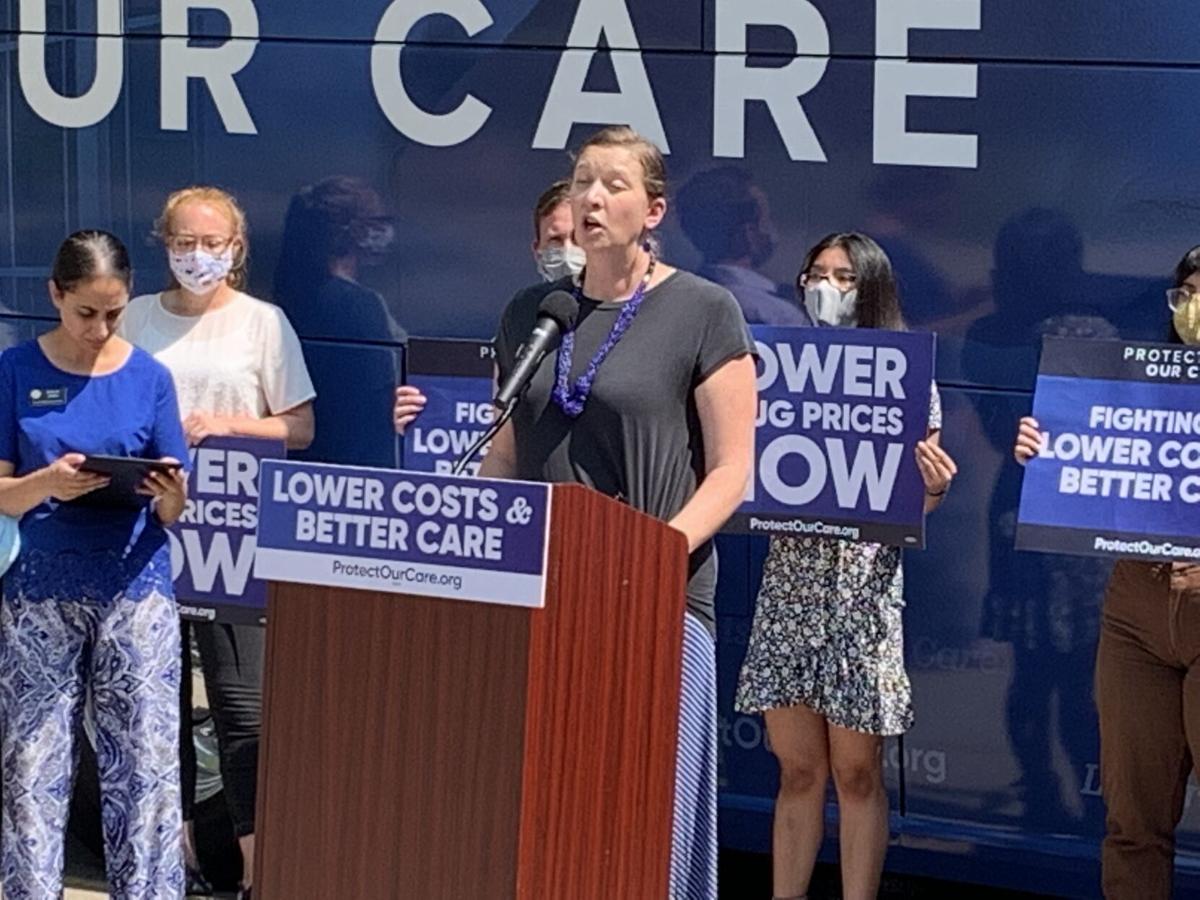 Mariah Leach of Mamas Facing Forward talks about her struggles with medication prices during Monday's Protect Our Care bus tour stop at the state Capitol. 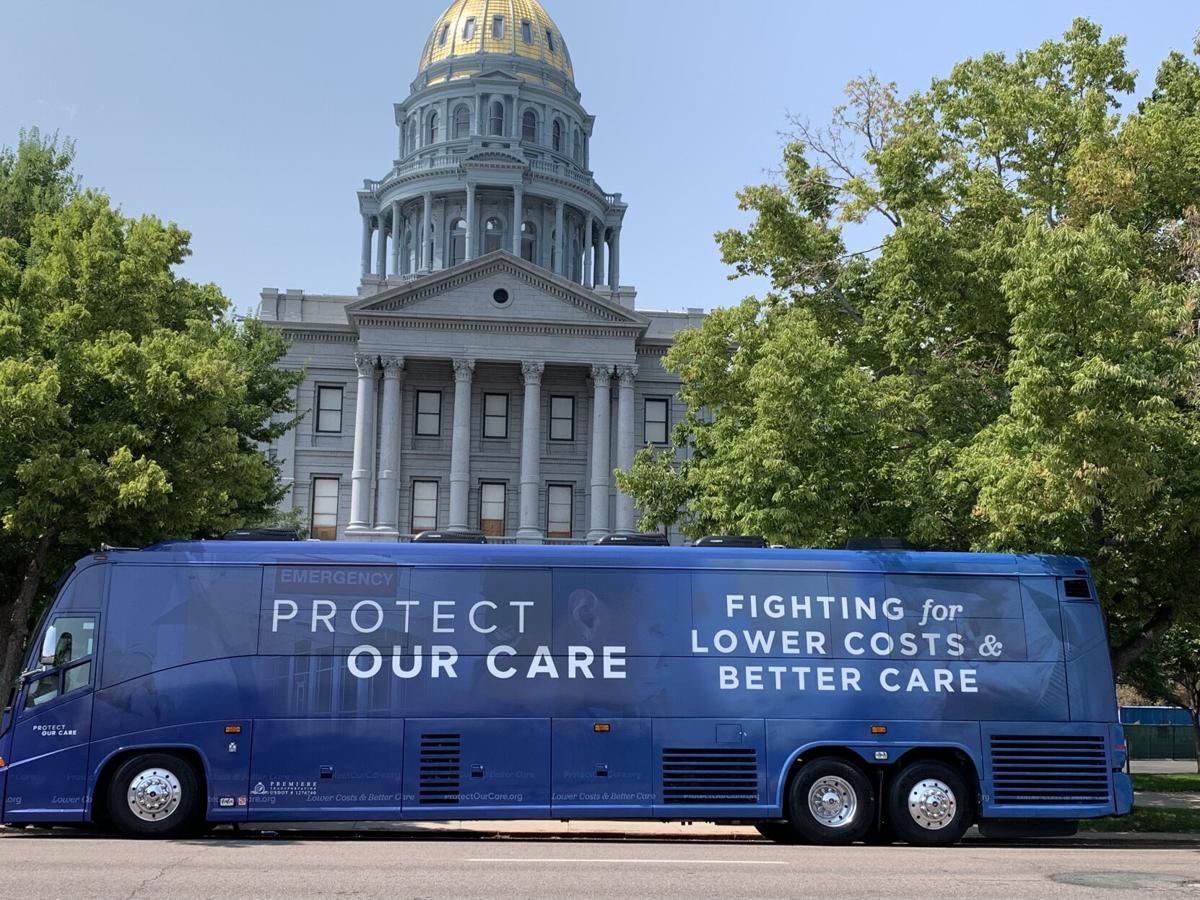 The Protect Our Care bus, parked along Grant Street east of the state Capitol, August 30, 2021.

Mariah Leach of Mamas Facing Forward talks about her struggles with medication prices during Monday's Protect Our Care bus tour stop at the state Capitol.

The Protect Our Care bus, parked along Grant Street east of the state Capitol, August 30, 2021.

Fresh out of quarantine from a positive COVID-19 exposure, U.S. Sen. John Hickenlooper was in Denver Monday to help promote a national call for Congress to lower health care costs, including for prescription drugs, and to reduce the racial disparities in health care. State lawmakers who were part of the Democrats' agenda on health care during the 2021 session also were on hand at the state Capitol, touting the General Assembly's passage of the Colorado option bill and a measure tied to efforts to reduce prescription drug costs.

The Protect Our Care nationwide bus tour traveled more than 8,000 miles and visited 19 states, with Colorado as one of its final stops. The organization is backed primarily by the Sixteen Thirty Fund, a progressive dark money group that does not disclose its donors. The Sixteen Thirty Fund has been very active in Colorado in the past decade, including contributions of more than $17.1 million to fund ballot measures, such as support for paid family and medical leave and increasing the minimum wage; and contributing to independent expenditure committees that support Democratic candidates for the General Assembly.

Hickenlooper said health care is at the top of the list for concerns from Coloradans. Too many families have to choose between their child's medication versus groceries or rent. Other families are pushed to the brink of bankruptcy by high medical bills. Congress can lower costs and expand coverage, which will make everyone safer, Hickenlooper said.

One of the solutions is to allow Medicare to negotiate for lower prescription drugs prices, he said. Expanding Medicare coverage to include hearing, dental and vision care is also critical, as are lowering Medicare premiums. "These are all things that work together to increase coverage, access to health care and to control the costs," he said. Boosting Medicare benefits is part of the budget reconciliation bill currently awaiting action in Congress.

State Rep. Iman Jodeh, D-Aurora, was one of the co-sponsors of House Bill 1232, the Colorado Option bill that intends to lower the cost of health insurance premiums by setting price caps on doctor and hospital services. Jodeh said the Colorado Option will ensure all Coloradans have an affordable option from each health care provider, and to close the racial disparity in health care so that people of color aren't using emergency rooms for basic medical care. "This is only a start, and there is still a lot to do," she said.

Among those on the tour: Mariah Leach of Denver, a freelance writer and founder of Mamas Facing Forward, which advocates for mothers with chronic illnesses. It isn't where she thought she'd be, Leach explained. She was in law school at CU-Boulder when she was diagnosed with rheumatoid arthritis, which put an end to her law career. She still struggles to cover the costs of part-time child care, medication and student loans. All of the life-changing drugs have been several thousand dollars per month; one infusion medication had a price tag of $10,000.

"It's important to recognize the financial impact of a chronic illness before we start talking about the cost of health care," Leach said. Even with the help of copay programs, the financial impact of her health care needs are enormous.  Although they met their $4,000 deductible by February and an $8,000 family deductible by April,  when her husband changed jobs, and they had to start over with the deductibles.

"I can't help feeling guilty about the opportunities we could be giving our children if so much of our family's budget didn't go to cover my health care costs," Leach said. "And I'm one of the lucky ones. My family comes up with a way to pay these astronomical costs."

State Sen. Julie Gonzales, D-Denver, was a co-sponsor of Senate Bill 175, which will set up a prescription drug affordability review board to establish caps for certain high cost drugs. People of color are more likely to have chronic diseases and heightened barriers for access to healthcare, she said.

9 bills that will likely shape Colorado in years to come

"We are doing the work in Colorado," she said, adding that the congressional delegation must do its part to ensure healthcare is affordable for all Coloradans and all Americans.