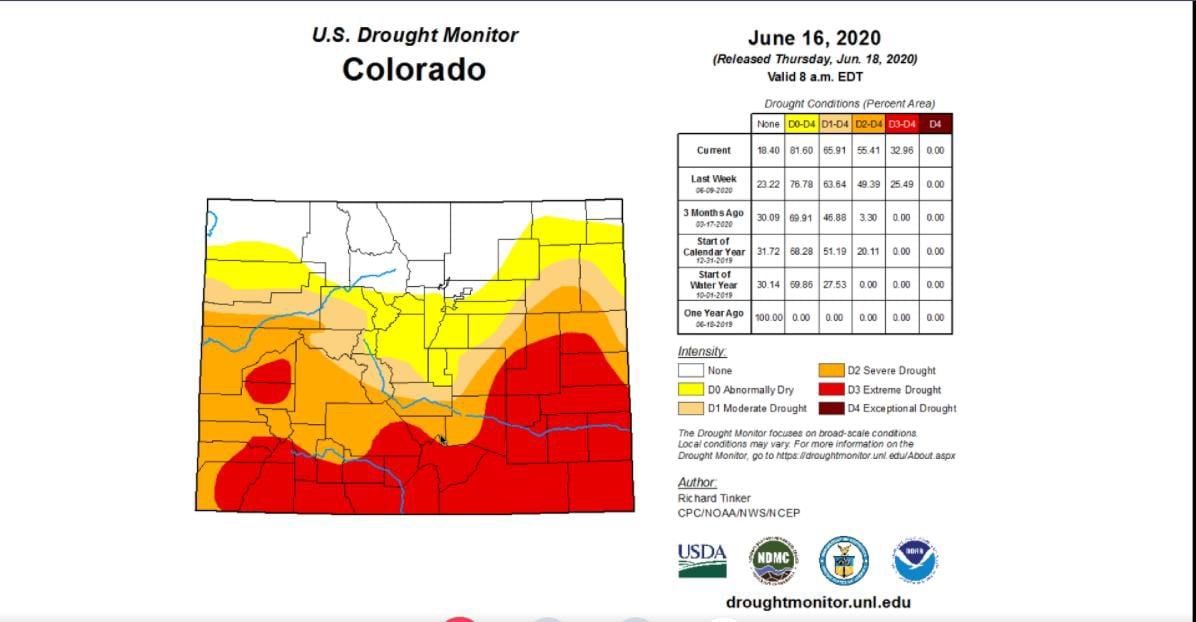 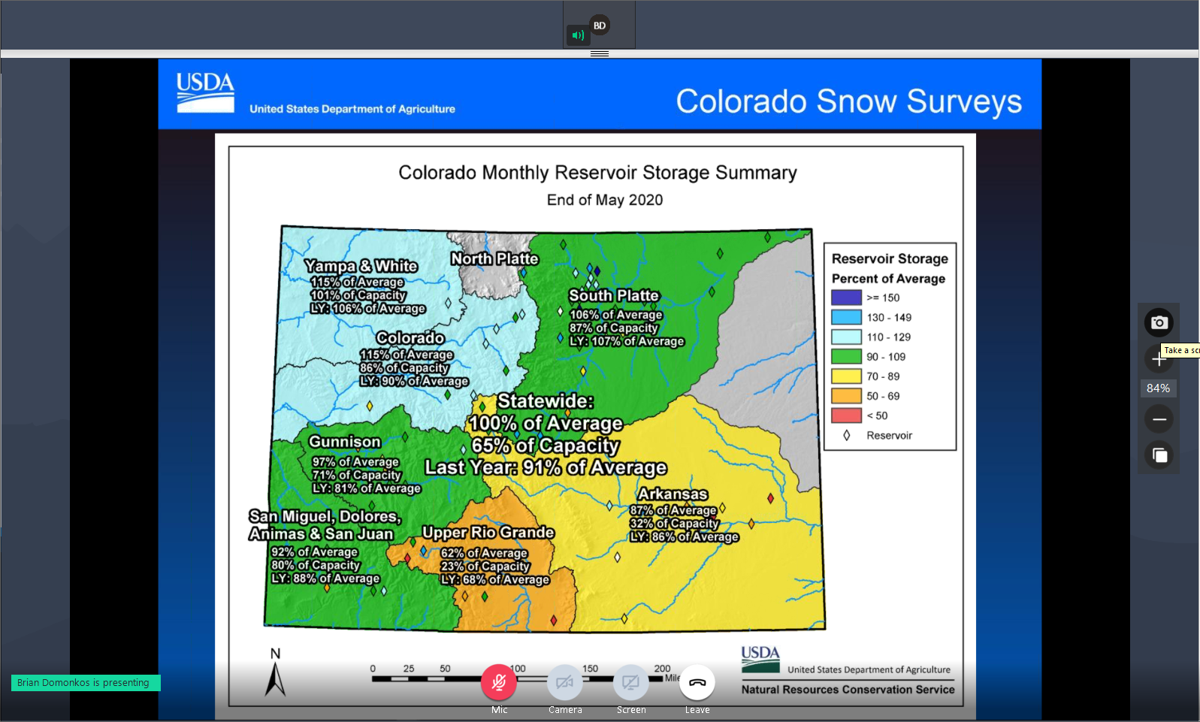 Gov. Jared Polis on Tuesday activated the state's drought plan for 40 of Colorado's 64 counties, in response to a warmer-than-average spring and far less precipitation than normal.

It comes just one year after a wetter-than-average 2019 when Colorado, for the first time since tracking began 20 years ago, was completely out of drought.

The "why" comes from the Water Availability Task Force, which Tuesday morning took a look at drought conditions for the state.

The good snowfall didn't happen in the past winter for most parts of the state, and certain weather conditions have put much of the state into a "flash drought" situation, according to Becky Bolinger of the Colorado Climate Center at Colorado State University. May precipitation, both rainfall and snow, was less than half of normal, although June has so far trended at normal levels, according to the Natural Resources Conservation Service.

A flash drought, Bolinger explained, is a new term that refers to a drought that takes place much more rapidly than a regular drought. In a flash drought, she said, "you're losing more moisture from the ground than normal," due to the high winds, low humidity, high temperatures and lack of rain or snowpack. The state was already in drought when the flash drought started, she added.

That's bad news for farmers and for the environment, too. Vegetation around the state is more stressed as a result of the flash drought, Bolinger explained.

Even northeastern Colorado, which normally is the wettest part of the state, is seeing signs of that stress, according to Climate Center maps.

On the Western Slope, at the Olathe measuring station, evaporative losses have been in record territory for the entire growing season.

The outlook for the next three months isn't any better, with expected higher-than-average temperatures and lower-than-average rainfall. Some areas won't recover precipitation deficits in this water year even with the usual summer monsoons, Bolinger said, such as in southeastern Colorado, where precipitation is 40% below normal.

A water year runs from October 1 to September 30.

Preliminary expectations for the July monsoons show strong rainfall for Arizona, but not so much for Colorado, Bolinger explained.

Brian Domonosko of NRCS said the snowpack is gone for most of the state. Only in the Colorado River basin is reservoir storage improving, Domonosko said. Reservoir levels are depleting in most of the state, particularly in the southern part of the state, which includes the Arkansas River, and the San Luis Valley, which is fed by the Upper Rio Grande River. That also includes the Gunnison River basin and the southwestern area served by the Dolores, San Juan, Animas and San Miguel rivers.

Domonosko pointed out that the Gunnison basin was well above average for precipitation in June, but the average is just 1.5 inches of rain. "A little bit can go a long way," he said. "We'll take it."

With the budget cuts for the upcoming fiscal year, "drought is the least of our worries in 2020," said Megan Holcomb of the Colorado Water Conservation Board. But the biggest concerns stemming from the drought are the fire season and the availability of firefighters, she said. "There are lots of added layers in responding to drought this year."

Colorado last activated the drought plan in 2018. The plan looked at drought hazards, like wildfires; mitigation, actions and funding. The plan will be updated by the Water Availability Task Force in the coming weeks.

The 2018 plan said the governor can move funds into the State Disaster Emergency Fund to fund emergency types of activities, such as fire suppression or drought response activities. However, that fund is already being heavily tapped by the response to the COVID-19 pandemic.

Much of the 2018 plan's mitigation efforts was focused on behind-the-scenes monitoring and evaluation strategies, although it also included seminars for ag producers on crop survival and livestock management. Deputy State Engineer Tracy Kosloff said Tuesday that resources are already available to ag producers, both from the state and federal governments.

The state's drought plan, including a toolbox designed to help local communities deal with drought is at https://cwcb.colorado.gov/drought

According to Sara Leonard of the CWCB, the governor's activation of the drought plan puts into motion weekly meetings for the state's drought task force, which will look at the impacts of drought on communities as a whole and how to fix them. "That might be sending funding to help farmers or Water Smart resiliency projects. This focuses primarily on communities as a whole, so working with local water users and governments, however, for the average citizen, it is still important to stay informed and be cautious and smart about individual water use. Watering restrictions will vary by community as well so people will need to check locally for those updates."

The CWCB has also set up a Twitter account for the drought, in part to allow the public to ask questions.

According to a Polis statement, the state's drought task force — which includes leadership from the Departments of Agriculture, Natural Resources, Local Affairs, Public Safety, and the Colorado Water Conservation Board — "determined the need to activate Phase 2 of the Drought Plan on June 18 after a third of the state reached extreme drought conditions." Phase 2 will allow the task force "to assess initial damages and impacts of drought in areas experiencing severe or extreme drought and to recommend mitigation measures. This Phase also activates the Agricultural Impact Task Force, which will conduct an initial assessment on physical and economic impacts and recommend opportunities for incident mitigation."

INSIGHTS | Neglect is a steep bet against Colorado’s wildfires

Joey Bunch: "A fire doesn’t care how broke you are, and that’s the powder keg of risk Colorado is sitting on right now."

If Jefferson County residents begin seeing flying objects in the sky through September, chances are those aren’t UFOs: those are drones from Xcel Energy conducting wildfire mitigation surveillance.