Gov. Jared Polis Wednesday afternoon announced he had concerns with the investigation into the death of Elijah McClain of Aurora and said he was directing his legal counsel to look at possible actions by the state.

"Public confidence in our law enforcement process is incredibly important now more than ever, " Polis said in the first of two tweets Wednesday.  "A fair and objective process free from real or perceived bias for investigating officer-involved killings is critical," the governor said.

I am hearing from many Coloradans who have expressed concerns with the investigation of Elijah McClain’s death. As a result, I have instructed my legal council to examine what the state can do and we are assessing next steps. (2/2)

"I am hearing from many Coloradans who have expressed concerns with the investigation of Elijah McClain’s death. As a result, I have instructed my legal council to examine what the state can do and we are assessing next steps."

McClain was the 23-year-old unarmed Black man and massage therapist from Denver who died last August, six days after Aurora police placed him in a chokehold. Officers forced him onto the ground for 15 minutes. Eventually, McClain began vomiting and complained he couldn’t breathe. Aurora Fire paramedics gave him a sedative, ketamine, and McClain apparently suffered a heart attack and went into a coma. He was taken off life support on August 30.

McClain's name was among those shouted during protests in Denver throughout May and June that began with the death of George Floyd of Minneapolis. Floyd died after a Minneapolis police officer was recorded putting a knee on his neck for almost nine minutes. The officer has since been fired and charged with murder.

No such charges have been filed in McClain's death, and an online petition seeking a new investigation has now drawn more than 2.3 million signatures. The Aurora Sentinel reported Wednesday the district attorney for the 17th Judicial District, Dave Young, has received more than 10,000 emails and a 1,000 voice mails demanding an independent investigation. Young's office declined to file charges in the case last November.

In February, Aurora City Manager Jim Twombly announced he would initiate a Critical Incident Review to examine how Aurora police and fire departments responded in the McClain case. But that investigation was canceled last week after reports that the Connecticut-based attorney, Eric Daigle, was a former state trooper and questions were raised by Aurora City Council members on whether he could be impartial. 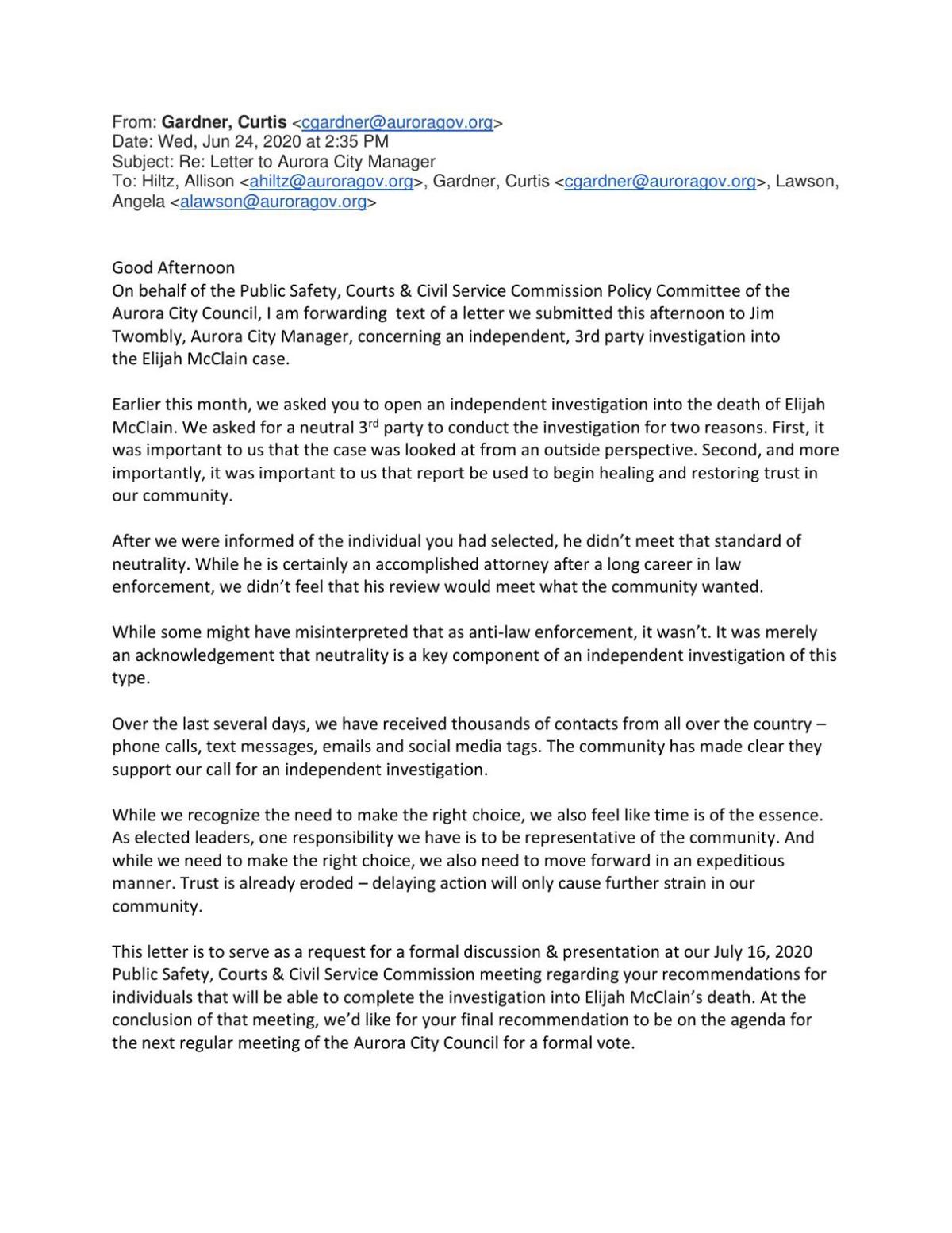 In Colorado, the governor can ask an attorney general to become a special prosecutor. Polis took that step last year, asking Attorney General Phil Weiser to serve as a special prosecutor for an investigation into allegations of misconduct against Brittny Lewton, the district attorney for the 13th Judicial District, which covers six northeastern Colorado counties.

McClain's death, which was reported in the New York Times on June 20, caught the attention of Ellen DeGeneres on Wednesday. She tweeted "Read what happened to #ElijahMcClain, and ask yourself what you would do if it happened to someone you knew," along with the hashtag #JusticeforElijahMcClain.