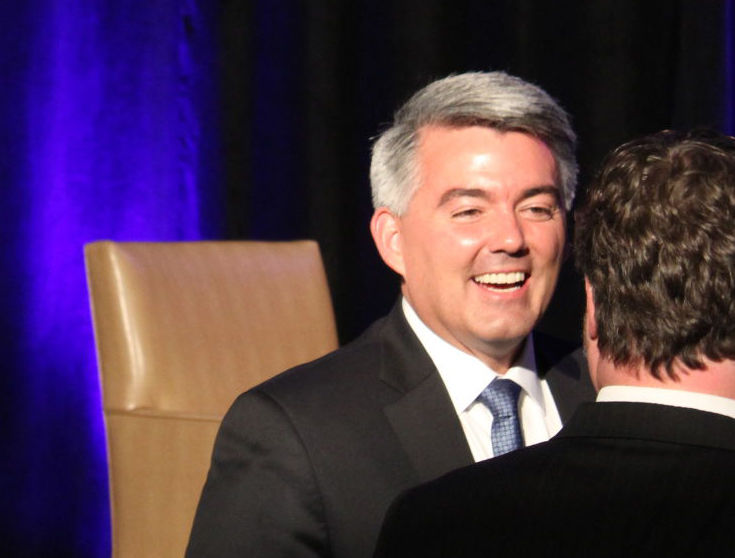 U.S. Sen. Cory Gardner talks with moderator Ed Sealover of the Denver Business Journal prior to giving his keynote address at the Colorado Chamber of Commerce's annual luncheon meeting in Denver on Thursday, Oct. 10, 2019. 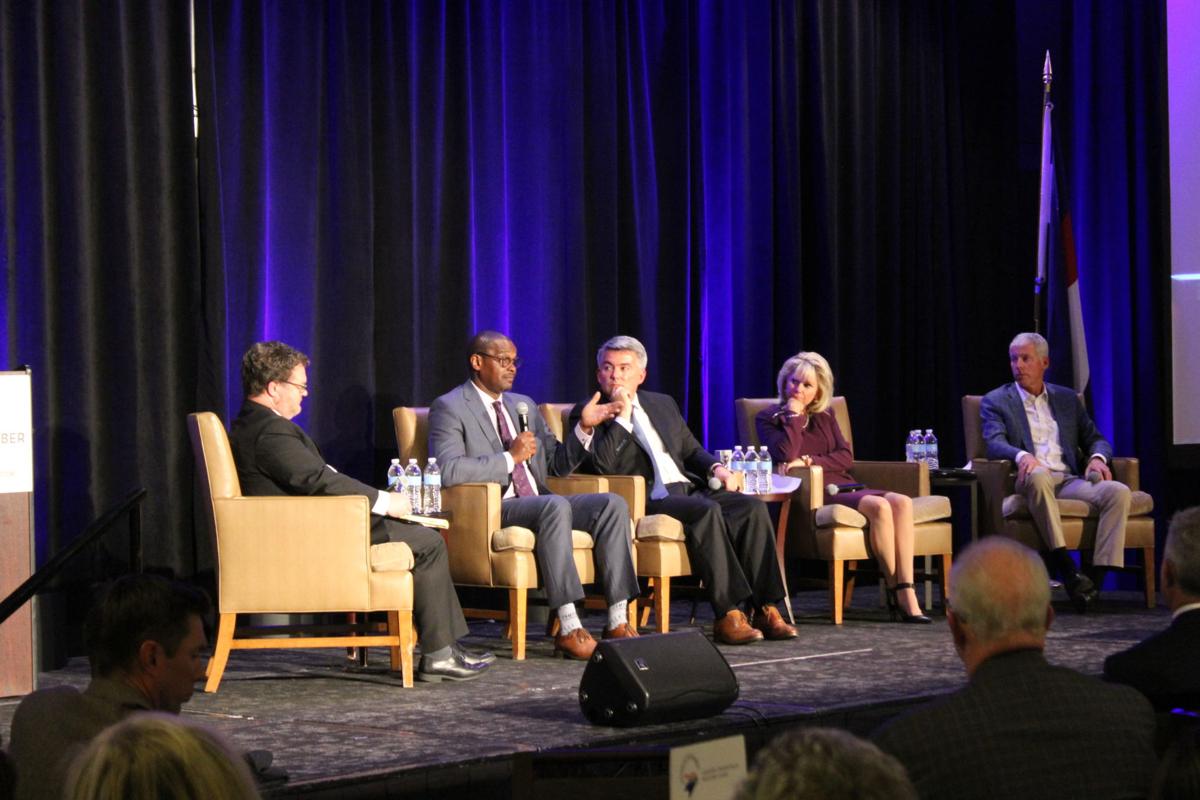 U.S. Sen. Cory Gardner, speaking in Denver Thursday, called the Trump impeachment inquiry in Congress a "partisan" effort and declined to answer multiple questions from reporters about whether President Donald Trump’s call to Ukraine was appropriate.

The Colorado Republican spoke at a Colorado Chamber of Commerce luncheon Thursday at the Westin Denver Downtown.

Gardner was featured as the keynote speaker at the annual event, which focused on industries driving the state’s economy.

During a brief press gaggle ahead of the luncheon, Gardner called out U.S. House Speaker Nancy Pelosi, a California Democrat, for carrying out what he sees as “a very partisan, partisanized effort" in launching the impeachment probe in the House.

“The Senate Intelligence Committee is having an investigation, a bipartisan investigation,” Gardner said. “Unfortunately, though, what we’ve seen is a very political process takeover.”

Breaking: @SenCoryGardner refuses to answer question whether it is appropriate for the President to ask a foreign leader to investigate a rival. Quite the exchange in Denver #copolitics #kdvr pic.twitter.com/5Y0EYOcKjM

In a written statement after the event, Colorado Democratic Party spokeswoman Alyssa Roberts said that Gardner is regurgitating "partisan talking points and putting his own political interests ahead of protecting our democracy.”

He highlighted economic opportunities in Colorado, including in agriculture, oil and gas, the outdoor economy, water conservation, and developments in research and technology.

“We should be on the ... leading edge of technology, and that is what drives economic opportunity in Colorado,” he said, adding  that the state can do even better.

He said the Bureau of Land Management's plans to move its headquarters to Grand Junction -- a proposal that Gardner had pushed for years -- will result in better decisions being made over public lands.

He stressed the importance of investing in opportunities across the state, not just Denver or Boulder, because “Colorado is only as successful as all the elements of the state.”

At the end of his keynote address, Gardner was presented with the U.S. Chamber of Commerce’s Spirit of Enterprise Award, given annually to members of Congress for supporting pro-growth policies.

The panel was moderated by the Denver Business Journal’s Ed Sealover.

Senate Republicans facing tough re-election battles are recalculating their campaign strategies amid the push from Democrats to impeach President Trump.

Colorado is one of the states to be targeted in what the organization calls its voter outreach program.

Hickenlooper's haul is almost twice the $1.1 million he brought in during the second quarter for his presidential campaign, which he ended on Aug. 15.

"This decision fails to protect allies who gave their lives alongside our troops to accomplish U.S. objectives and fails to facilitate our continued efforts against ISIS," Gardner said.

Gerald F. Seib of The Wall Street Journal: "The focus in the impeachment drama, heretofore on House Democrats, increasingly will shift to Senate Republicans."

There’s a number Colorado voters will be hearing a lot between now and the 2020 election: 98.

Republicans seeking re-election — including Colorado's U.S. Sen. Cory Gardner — face a choice: Defend Trump and risk going down with the ship, or watch from a safe distance and risk losing Republican votes.

Gardner's denunciation on the communist country's 70th anniversary came in sharp contrast to the congratulations offered by President Trump.

The attorney is the new board chairman for the statewide chamber.

Mitch McConnell suggests the chamber could dispense with impeachment articles quickly, but his party might not vote as a bloc.

Gardner, other Republicans stumbling over question at heart of impeachment

A majority of Coloradans favor an impeachment inquiry of the president, and support former Gov. John Hickenlooper over Republican incumbent Cory Gardner, the poll says.

Hispanics will represent the electorate’s largest minority group in the 2020 election for the first time in history.

U.S. Sen. Cory Gardner on Friday added his name to a list of Republican senators supporting a resolution denouncing the Democratic-controlled House for treating President Donald Trump unfairly in its impeachment inquiry.

A group of prominent anti-Trump Republicans on Monday tore into U.S. Sen. Cory Gardner in a scathing digital ad, calling the Colorado Republican "a small man frightened of a political bully."